​​In 1975, 17-year-old Cesario “Chayo” Covarrubias left his town of Momax, Zacatecas to join his brothers in East Los Angeles. In Mexico, the Covarrubias family farmed corn, tobacco, and beans. But in the United States, the family business was tortillas

Chayo’s hermanos worked at El Toreo, a tortilla factory off Whittier Boulevard in Boyle Heights. His first job with them was to count tortillas as they came down the production line, to make sure each pack of corn contained three dozen tortillas and each flour pack had 12. Covarrubias got more and more responsibilities until he left El Toreo in 1987, when it closed, for La Fortaleza in East LA, the largest tortilla factory in the Eastside.

But Covarrubias stayed there just one year before jumping to the smaller La Princesita nearby.

“I asked the owner of La Fortaleza for a week of vacation,” the 63-year-old Covarrubias explains over the clang of machines and hiss of steam at La Princesita’s facilities off Cesar E. Chavez Boulevard. “He said that was fine, but wouldn’t give me paid time off. So then my brother told me to join him at La Princesita and ask Pancho for a job,” he said, referring to La Princesita’s legendary founder, the late Francisco Ramirez.

“So I asked Pancho if he’d pay for my vacation,” Covarrubias continues, “and he had no problem with that. Later on, La Fortaleza asked me to return, and I said ‘You had your chance!’” 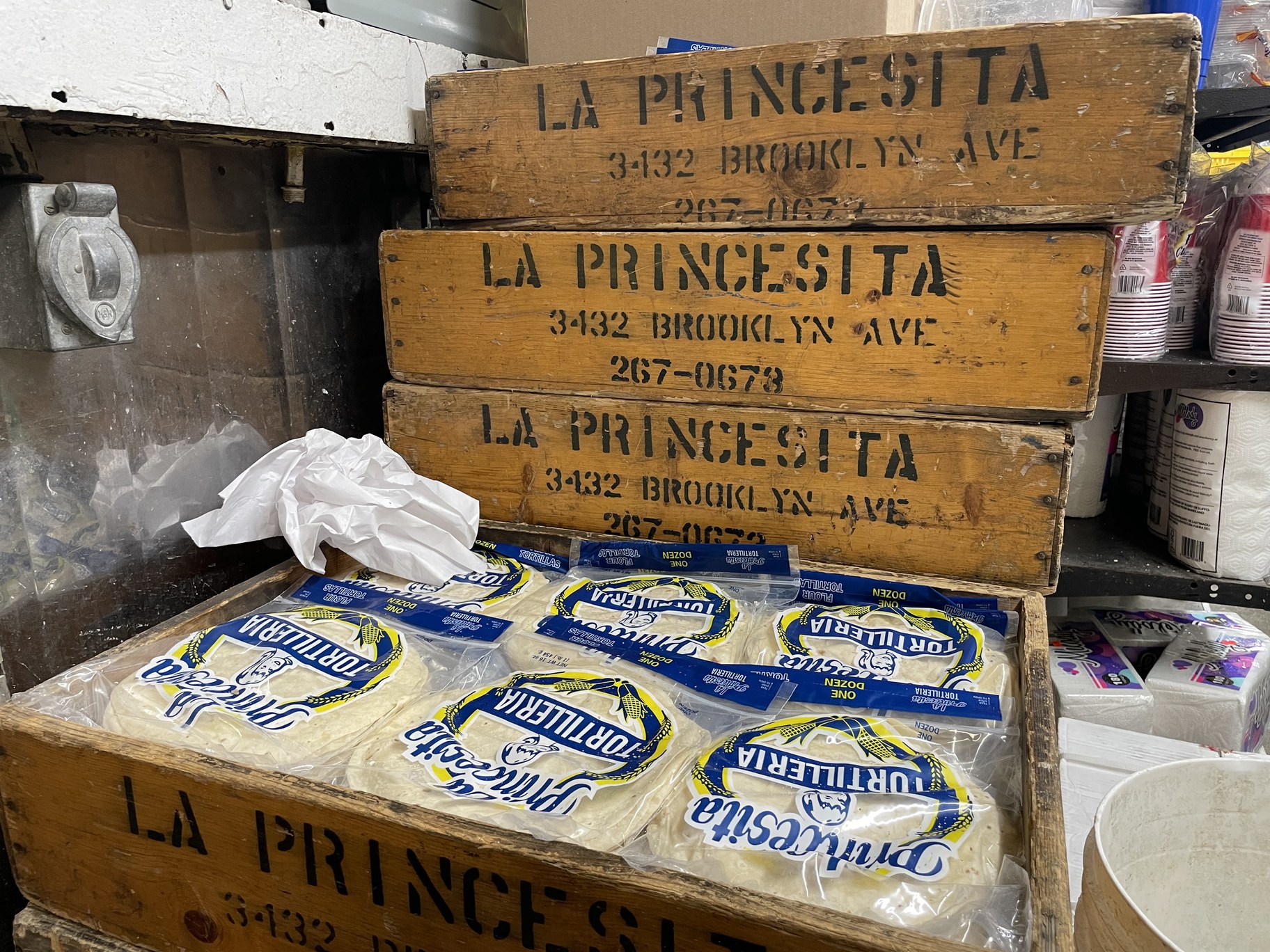 La Princesita made it into the Eso 8 of this year's #TortillaTournament. Photo by Gustavo Arellano.

Covarrubias has been with La Princesita ever since. He’s now their production manager, in charge of fixing all machines to make sure their corn and flour tortillas maintain their delicious flavor.

He’s also one of just three people that the Ramirez family entrusts with perhaps their most important job: Preparing the stones that grind La Princesita’s corn into masa.

“Just call me un picapiedras [a Flinstone],” the gregarious Covarrubias says with a laugh.

We climb a flight of stairs to La Princesita’s roof. On a table were Covarrubias’ tools for the day: a small circular saw, a flat-edged screwdriver connected to an air hose, and about a dozen smooth, 60-pound millstones made from basalt, the porous volcanic rock that has served as Mexico’s base to grind corn for millennia. Every week, Covarrubias puts a new pair of stones into La Princesita’s molino (mill) to ensure that the masa comes out perfect to make corn tortillas: not too grainy, not too smooth. 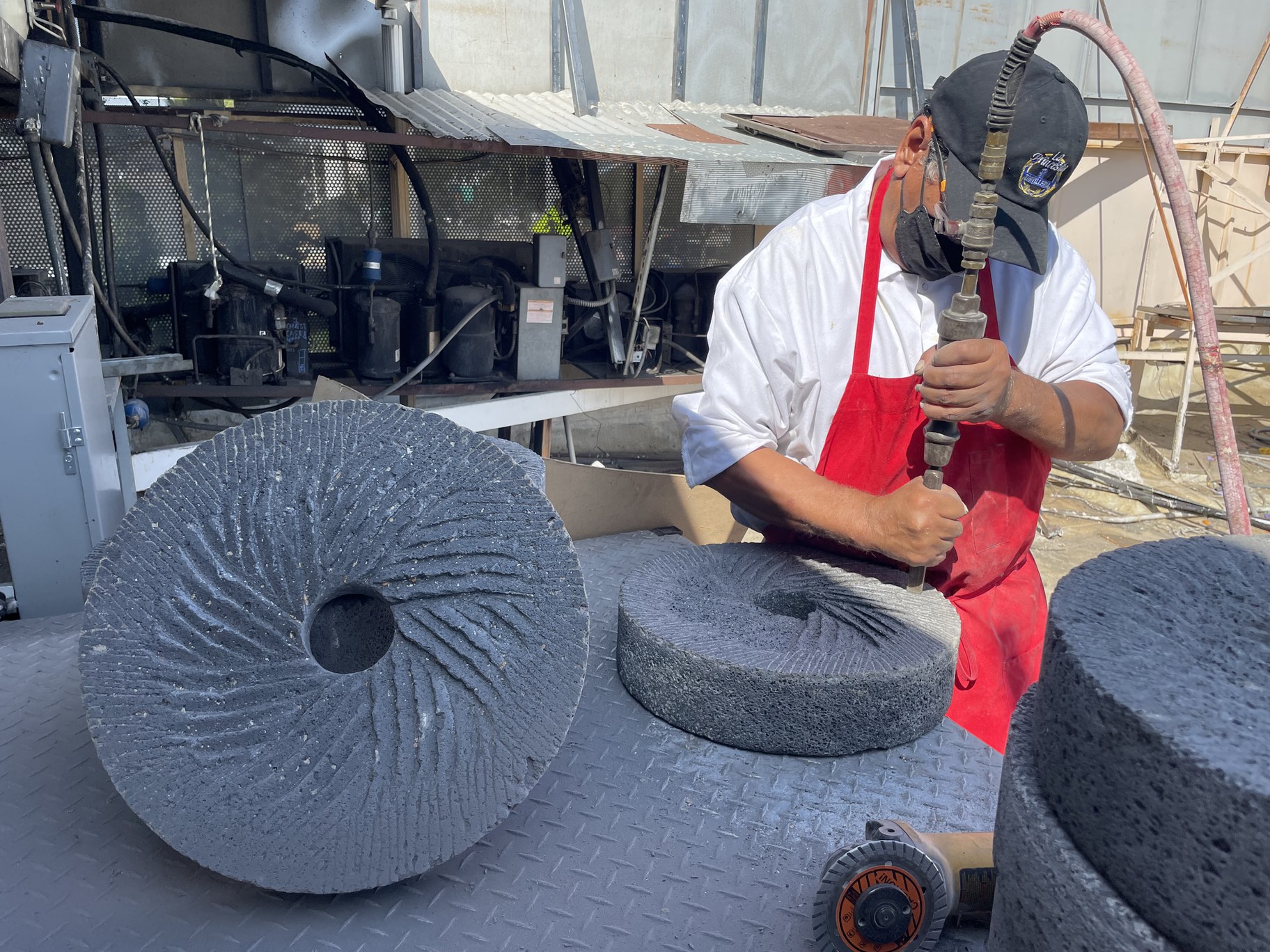 Covarrubias using a pneumatic screwdriver to dig grooves into the millstone. Photo by Gustavo Arellano.

“If you cut it too much, the masa doesn’t grind right,” Covarrubias explains as he puts on some safety goggles. “The tortillas mess up. Production messes up. So I got to get my cuts right.”

Covarrubias took over preparing La Princesita’s millstones about 15 years ago, when his predecessor retired. “He never taught me formally,” Covarrubias said. “I’d just see how people would do it. I never went to school, not even as a morrillo [youngster]!”

He grabs a millstone and lightly buffs off the top “to take off the shiny.” With his saw, Covarrubias then makes deep, somewhat parallel grooves that start from a hole in the center and go up about three-quarters up the millstone. For the final quarter, Covarrubias makes thinner lines. He cuts multiples of each, in a crosshatched pattern that ends up looking like a Mesoamerican sunburst.

I ask if he needs to do that pattern for optimal grinding. “No, that’s how I learned it,” he says. “Other people do their way, and that’s fine. What matters is how deep the cuts are, and how sharp they are.”

The outer grooves are as thin as a line drawn with a pencil; the inner ones are large, and sharp enough where you can cut yourself if you swipe your finger across, but dull enough so that the groove won’t cut you if you merely press on it. 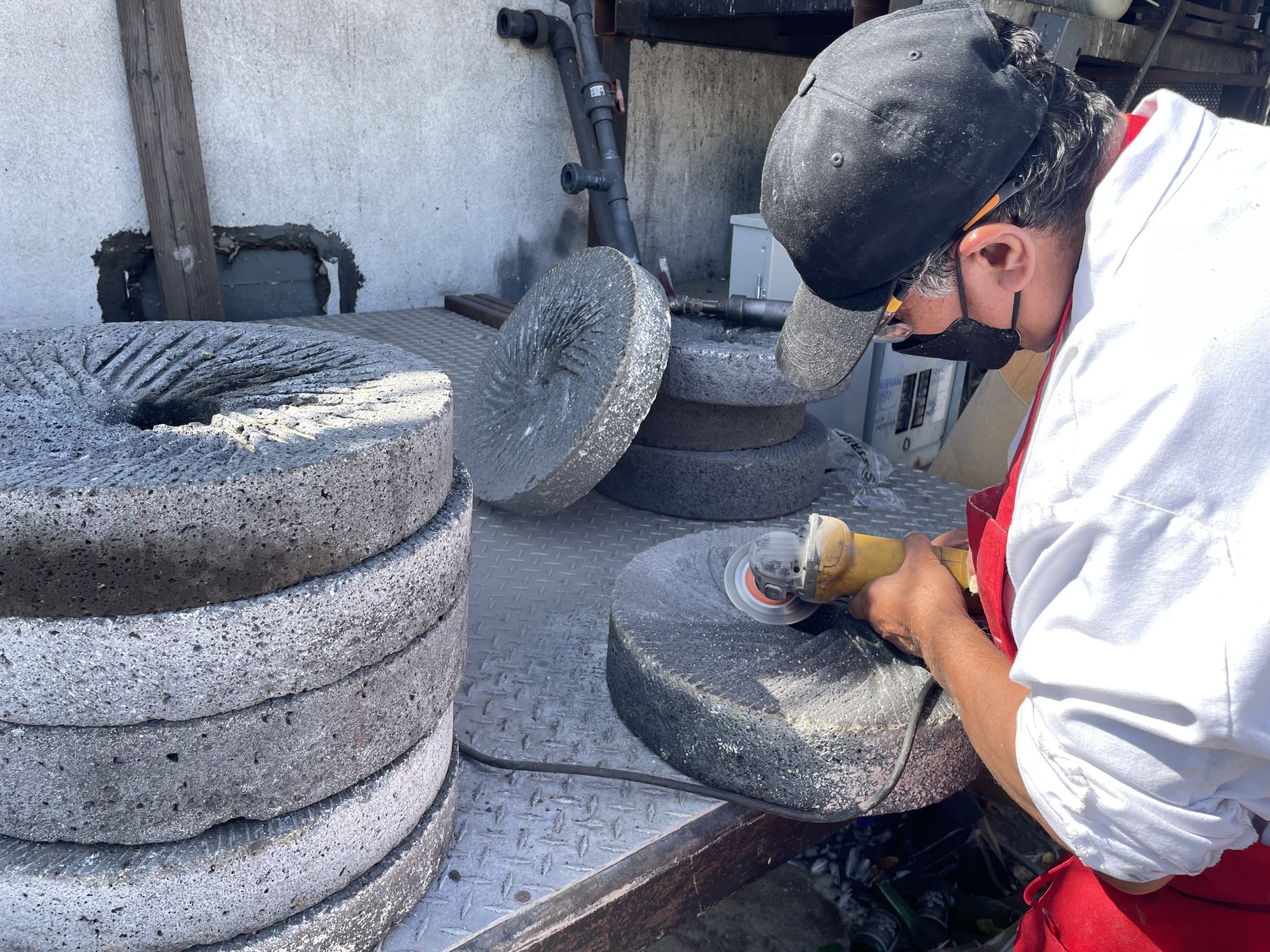 Covarrubias cuts grooves into the millstone. Photo by Gustavo Arellano.

Each stone takes from about half an hour to an hour to prepare, depending on its final use (stones get cut in different ways depending on production, like tortilla chips or masa for tamales). Covarrubias remembers when people would use hammers and screwdrivers to make the millstone cuts, “and that would take longer, but not that much longer, and it wasn’t that much harder.”

After the initial cuts, Covarrubias then uses the pneumatic screwdriver to make deeper grooves. Once they’re to his liking, he uses the air hose to blow off any remaining pebbles or sediment.

He looks at the finished product and smiles. “¡Ya esta filoso!” Covarrubias grins. It was now sharp.

La Princesita’s current millstones still have about a day’s left in them, so I don’t see Covarrubias install his latest creation in the factory’s molino. But he does let me see the current ones to explain how a good millstone works. He opens up the molino so I can see two stones pressed against each other. A small chute pours nixtamalized corn into their center. When they grind, the corn kernels go through the small space between the millstones, and the masa oozes out and falls to a container. 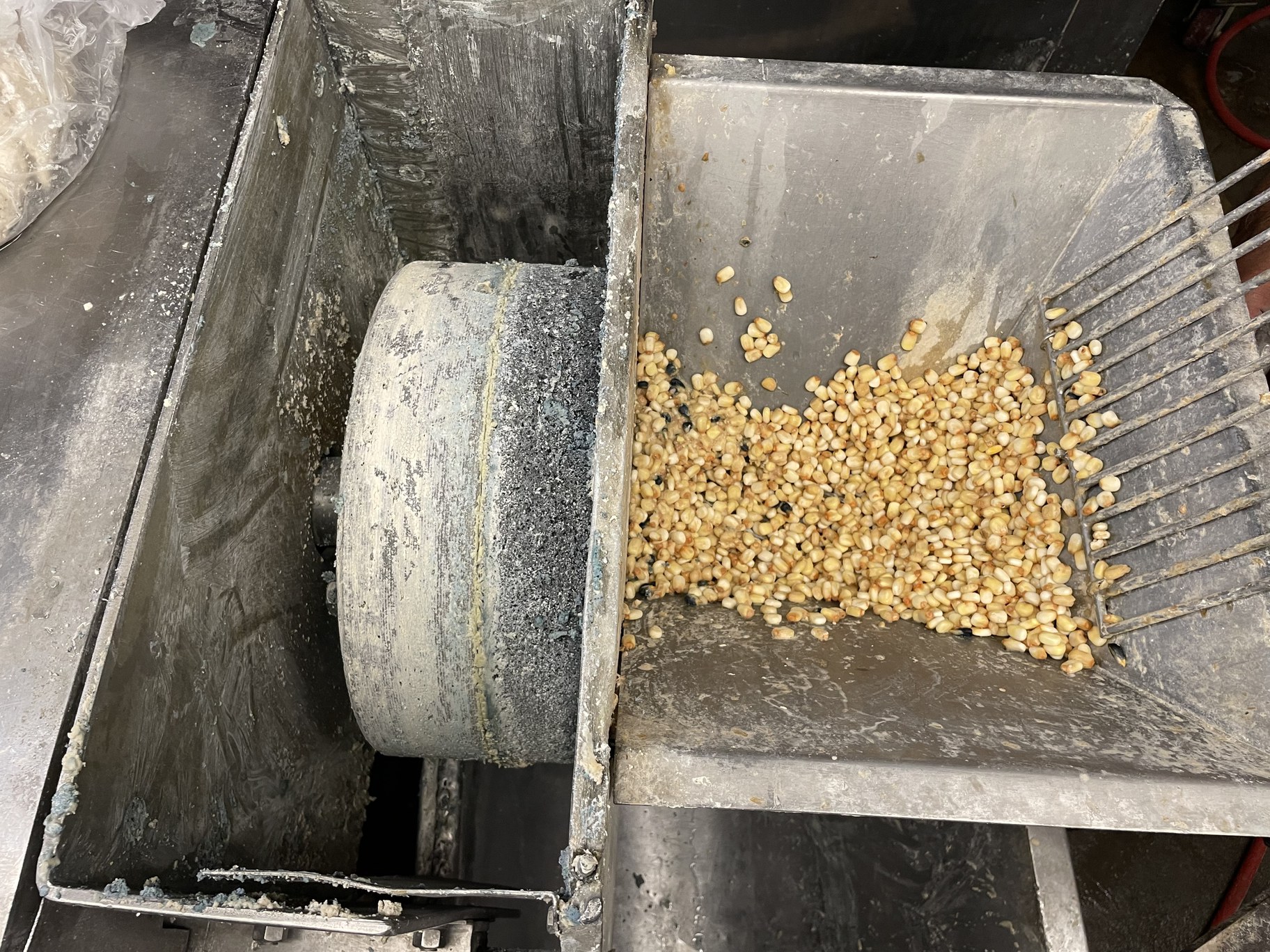 “You need the masa to feel gummy, with not a single corn kernel,” Covarrubias says. “La masa te dice [The masa tells you].”

Covarrubias knows he’s not going to be around forever, so he’s trying to find an apprentice among La Princesita’s workers; none have stepped up so far.

“What he does is art,” says La Princesita President Monica Ramirez, who runs the business with her siblings. “It’s great he knows how to do it like our ancestors, but someone else has to learn.”

“Who knows? Maybe one day, this industry won’t need someone to prepare the rocks anymore,” Covarrubias responds, half-serious and half-joking. “Everything is electronic. But by then, I’m not going to be here anymore.”

He then excuses himself. It’s his last day before going off on his annual two-week vacation. Paid.