The tale of the ugly duckling burrito: How tortillas taught me to embrace my identity The power of a home-packed, foil-wrapped burrito contains multitudes. Photo via Shutterstock.

I distinctly remember the first time I was ever embarrassed by my food. It was in second grade at Denker Avenue School in Gardena, where all but a few of my classmates were Japanese American. Born in East Los and raised in the South Bay, I wasn’t yet aware that I was Mexican. I knew I was different, but it wasn’t something I consciously attributed to race. I mostly thought it was my lack of stuff. I had no real concept of money, nor that my family’s shortage of it — rather than what I thought was simply my mother’s disdain for material objects — was the reason I had no Hello Kitty erasers. No My Melody stickers. No Little Twin Stars pencils – nothing of the recently popular Sanrio crew for me to trade with my classmates. They had umbrellas, T-shirts, rain boots (remember when it rained every season like clockwork in Southern California?), pencil cases, bento boxes… all sorts of kid currency.

About those bento boxes. Every day, I grabbed a subsidized cafeteria tray, which landed me at a different set of tables than my lucky lunch-from-home friends. Looking across to their area, I’d see them pull their cute bento boxes out of their lunch pails. And when they opened those bento boxes? Cue wind-swept hair, sparkly eyes, and twinkling smiles. It was pure glory: little compartments filled with delights I couldn’t quite make out from my corner of the cafeteria, but I knew had to be good by the way they carried on and traded items. I really wanted in on that action. I may not have Kitty stuff, but we all have food, right? So I decided I’d ask my mom to fix me a home lunch, too. And she came through — but boy, did I regret it.

The next day, I walked to school on top of the world. There was a brown paper bag in my backpack that would buy me a seat at the table with my lunch-from-home friends. I pictured how we’d talk, hang, and share stuff. I really liked my friends and they really liked me. I knew we meant more than lunch to each other, but I was tired of being so “different” all the time. 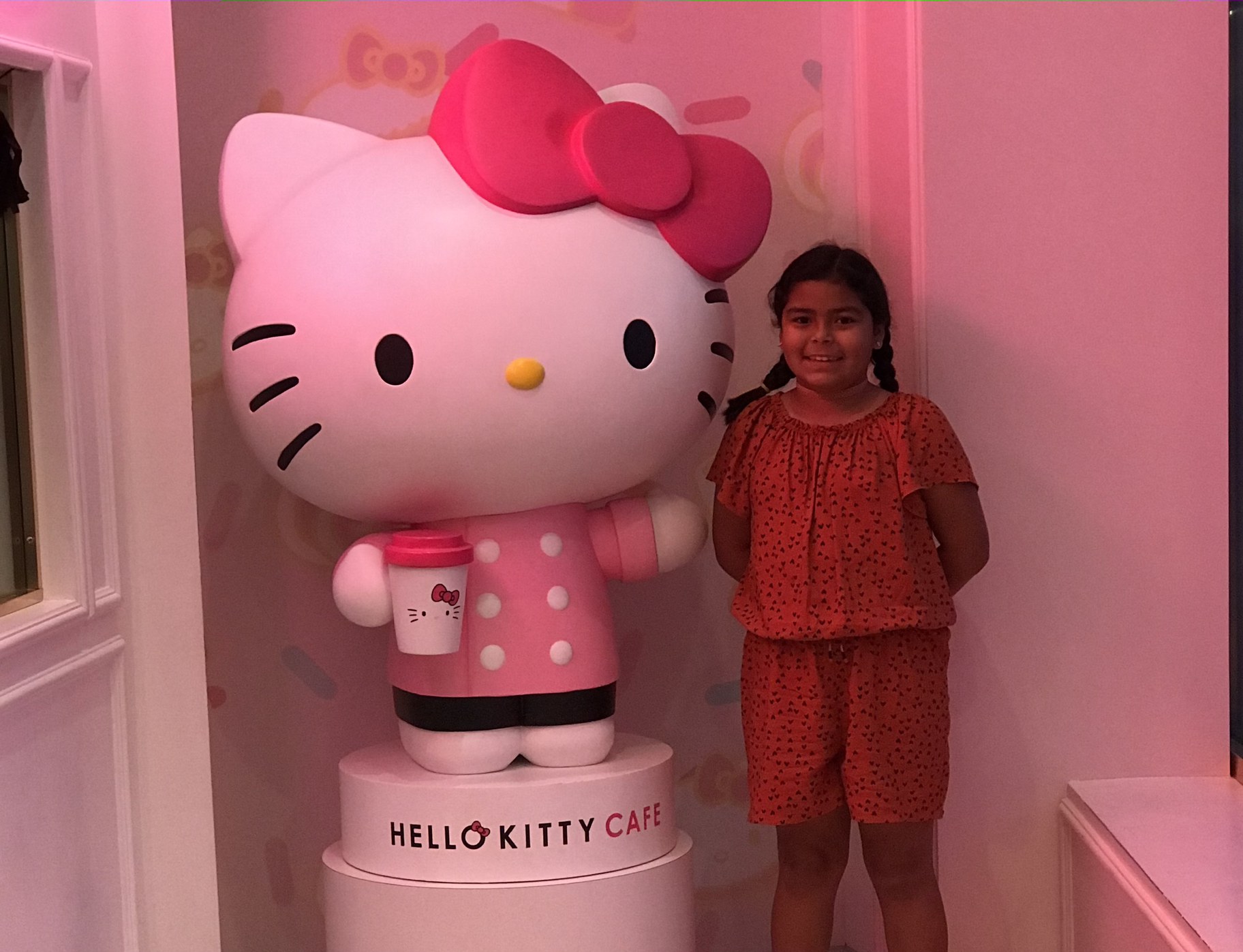 The author’s daughter poses at the Hello Kitty Cafe. Photo by Connie Alvarez.

At lunchtime, I happily skipped the cafeteria line and joined my bento buddies. Now picture this: I reach into my bag and pull out... not a square little box like I’d asked for, but a wrinkled, tin foil-wrapped, warm, heavy mystery bundle. With a sense of dread and no turning back, I carefully unwrapped the (clearly re-used) tin foil and hoped against hope that whatever I was about to unravel wouldn’t embarrass me.

But it did. Horrifically. I spread the foil out on the table and laid bare for all to see the biggest, ugliest, lumpiest burrito I’d ever seen.

There was no hiding it — it was too big. Nothing delicate about it. Nothing cute about it. And it was moist from condensation, making the tortilla look wrinkly and old. My friends looked over and said nothing. They didn’t want to embarrass me, but their polite silence was worse — perhaps the worst thing that could happen to a simple second grader with high lunch hopes.

I knew I wouldn’t eat it. I didn’t even bother to open it to peek at its ingredients. I already knew it would be an egg, weenie, and potato burrito because it was my favorite kind — at home — that my mom made with love for my brother and me.

That was the day I fully realized I was Mexican and not just poor. I came to a hard understanding that even if my lunch were prettier, it would be my culture’s pretty, not in a box with little compartments. Rich or poor, bento box or flour tortilla, each were intrinsic vessels of our different heritages. I felt very alone that lunch and more different than ever.

But luckily, as a kid, we also have built-in resiliencies. By afternoon recess, I doubled down on what my friends and I did have in common — our sense of humor. We laughed about my burrito. We laughed about someone’s stinky bonito fish flakes they had asked their mom not to sprinkle on their rice. I was grateful they were my friends. But I never lost the fact that I was a little bit lonely for more companions from my own culture who wouldn’t have had to express polite silence, because they’d each have a burrito, or beans and rice, or, heck, chiles rellenos in their lunch bags. 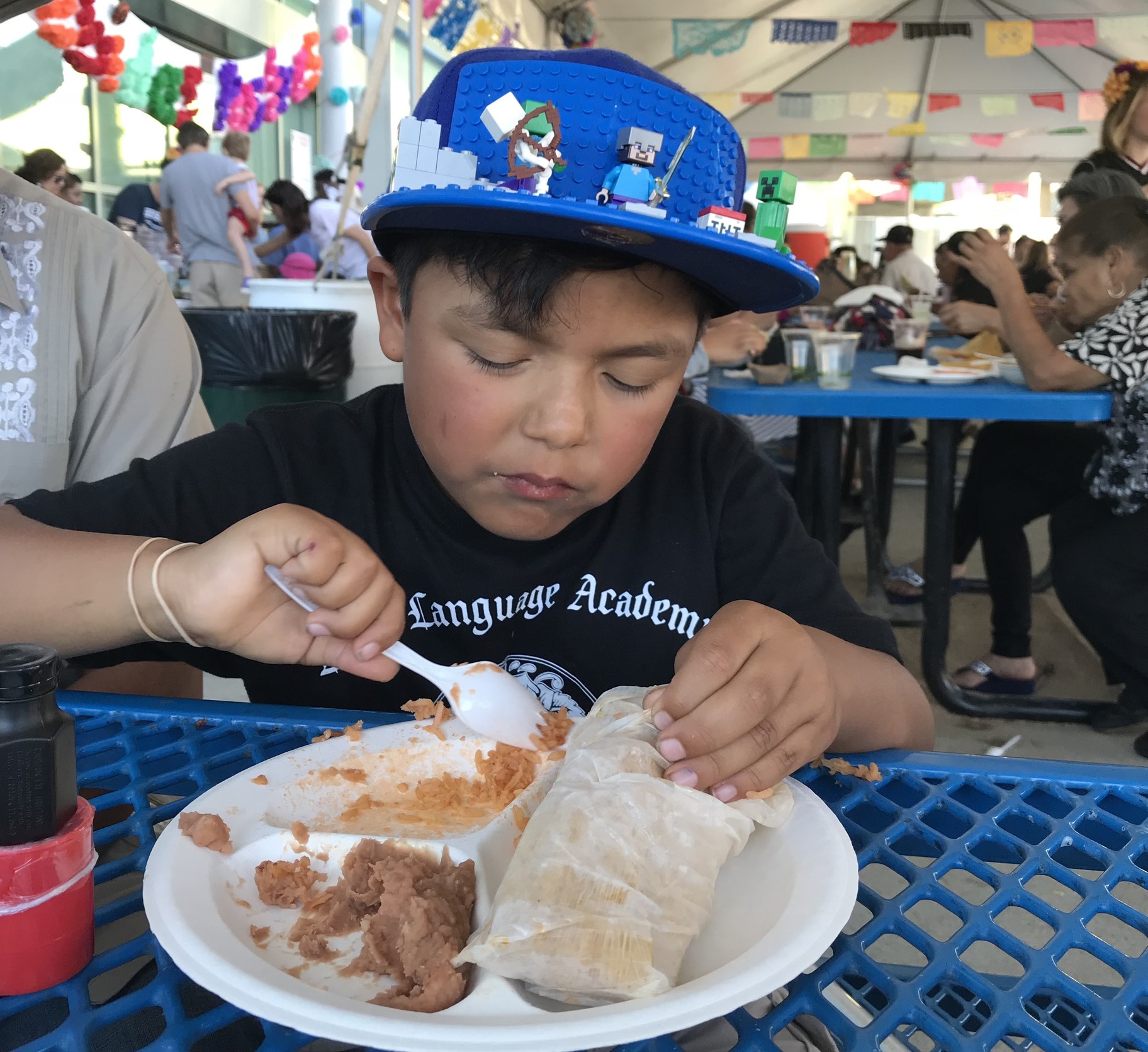 The author’s son proudly chows down on a burrito at lunchtime. Photo by Connie Alvarez.

When it came time to send my own kids to school, I wanted them to see themselves a little more than I did in those early years. I love the rich variety of populations we enjoy in SoCal, but it goes a long way to feel tacitly understood when you most need it.

I found a great Spanish immersion school and enrolled my kids to develop their pride and normalize their MexAm identity. It seems crazy since there are so many of us in California, but we are also a state notorious for segregated ethnic pockets. At the same time, kids today are so much more open-minded, and I can’t help but wonder if this would have been their struggle at all.

Regardless, their school wowed me. The cafeteria was lined with murals of Cesar Chavez, Frida Kahlo, Dolores Huerta, and other luminaries of Mexican and Latino culture. I even wondered if it might be overkill.

All those worries dissipated when I saw the school’s diverse students. And the parental involvement put me to shame. I went from being embarrassed by a burrito, to embarrassing my kids by not getting on the tamal-making line with the other moms in their school (I’d only get in their way)! We’re talking white, Asian, Black, and other moms and dads who can make masa, atole, and pozole, and whip up arroz con leche like pros for the school’s Fall Festival.

And at their lunch time? The kids are little foodies — they’re accepting of everyone’s food choices and share zaatar in olive oil with bread, red beans and rice, sushi, and yes, even school pizza.

Food is deeply personal. A saying comes to mind about immigrants’ children, along the lines of “What the son wishes to forget, the grandson wishes to remember.” Today, my kids judge alongside me in our annual Tortilla Tournament, and they won't accept anything less than the top five of either category at mealtimes (and they can tell).

Am I the ugly duckling in this story? Perhaps. These days, my fervent directive is let’s all get inside this big, beautiful, moist tortilla and make a glorious swan of a burrito together.