Mayor Garcetti puts his back into it at a Prop HHH construction event in South Los Angeles in 2018. Photo by Saul Gonzalez.

Five years ago this month, LA voters overwhelmingly voted for Proposition HHH, a $1.2 billion bond measure to create 10,000 new apartments over a decade for people experiencing homelessness. Halfway through that timeline, nearly all the money is committed, yet only about 1,000 HHH-funded units have opened, at an average cost of more than $500,000 each, according to LA Mayor Eric Garcetti’s office. Still, city officials project that before another five years passes, HHH will meet its goals.

So is Prop HHH failing or succeeding?

Garcetti argues that the measure should be graded according to what it set out to do. By that standard, he says, it’s on track: “I think it was one of those rare examples of what we said we’re doing coming in under budget and under time.”.

While some voters may have thought the aim of Prop HHH was to end homelessness in the city (where more than 41,000 people live on the streets and in shelters), Garcetti says that was never the goal, and if it were, the measure’s grade would be somewhere below an F. “It’s an H,” he quips. “An HHH.”

Others argue that even if HHH ultimately lives up to its own modest standards, the measure lacked ambition, urgency and creativity from the start, representing a failure to seize opportunity.

“What is the plan after these funds are spent?” asks the city’s former chief administrative officer, Miguel Santana, who also headed a citizen panel overseeing HHH. Instead of settling for the typical poky pace of new affordable housing development, he says, the city should have used the one-time dollars to spearhead new, more efficient ways of building.

“If we were really thinking about this at the level that met the need,  we could have hopefully created a national model for building affordable housing at the scale that's necessary,” Santana says

That is not what’s happened.

Instead, HHH plugged its $1.2 billion into the longstanding Byzantine system that already exists around affordable housing financing. Within that system, developers solicit money for projects from multiple sources (like banks and government loans), using each financial commitment as leverage to secure the next. Going around to three, four, even five different funding sources on a single development takes time and, ironically, money.

“It's not uncommon to spend several hundreds of thousands of dollars, or in some cases well north of $1 million in legal fees on the front end before we ever put a shovel in the ground,” says John Maceri, CEO of The People Concern, a homeless services nonprofit that has been involved in developing new affordable housing projects.

Prop HHH was supposed to simplify that process by providing developers with one sure pot of funding early. The hope was that many could then complete their budgets with only one additional source. However, it didn’t work out that way for a variety of reasons, including some outside the city’s control.

Obtaining the credits, which are distributed by the IRS to states and local municipalities, and then to affordable housing developers, has also become extremely competitive in recent years. The process can take many months or even years in some cases, according to city officials and developers.

Still, Hughes speaks positively about HHH. “I know the general public may not feel like housing is being produced,” she says. “But we are producing more and more supportive housing and getting people off the streets. The unfortunate part is that we're also seeing people, especially in an economic downturn, experiencing housing instability and sometimes homelessness too.”

Others are more critical. In a pair of audits, LA City Controller Ron Galperin criticized HHH projects for being too slow and too expensive. Costs have ballooned from what Galperin says was an original projection of $350,000 per unit to the city’s current estimate of $579,616 per unit. (The city typically only kicks in about a quarter of that, and the rest comes from other sources). Galperin has argued for clawing back HHH money from excessively slow or expensive projects and putting some of it into more immediate, transitional housing options.

Former LA chief administrative officer Miguel Santana, meanwhile, says that the city should have looked to invest in more innovative models from the get-go, rather than putting so much money into traditional affordable housing deals. He points to the state’s Homekey initiative as one example of a more efficient approach. Created during the pandemic, Homekey provides cities and counties with federal dollars to buy and convert motels into homeless housing.

"From the perspective of someone experiencing homelessness, who has to wait four to five to six years for housing, from the perspective of a community that only sees the problem getting worse … we could have done better to move faster,” says Santana. “Not just for HHH, but rather to think about a life post-HHH.” 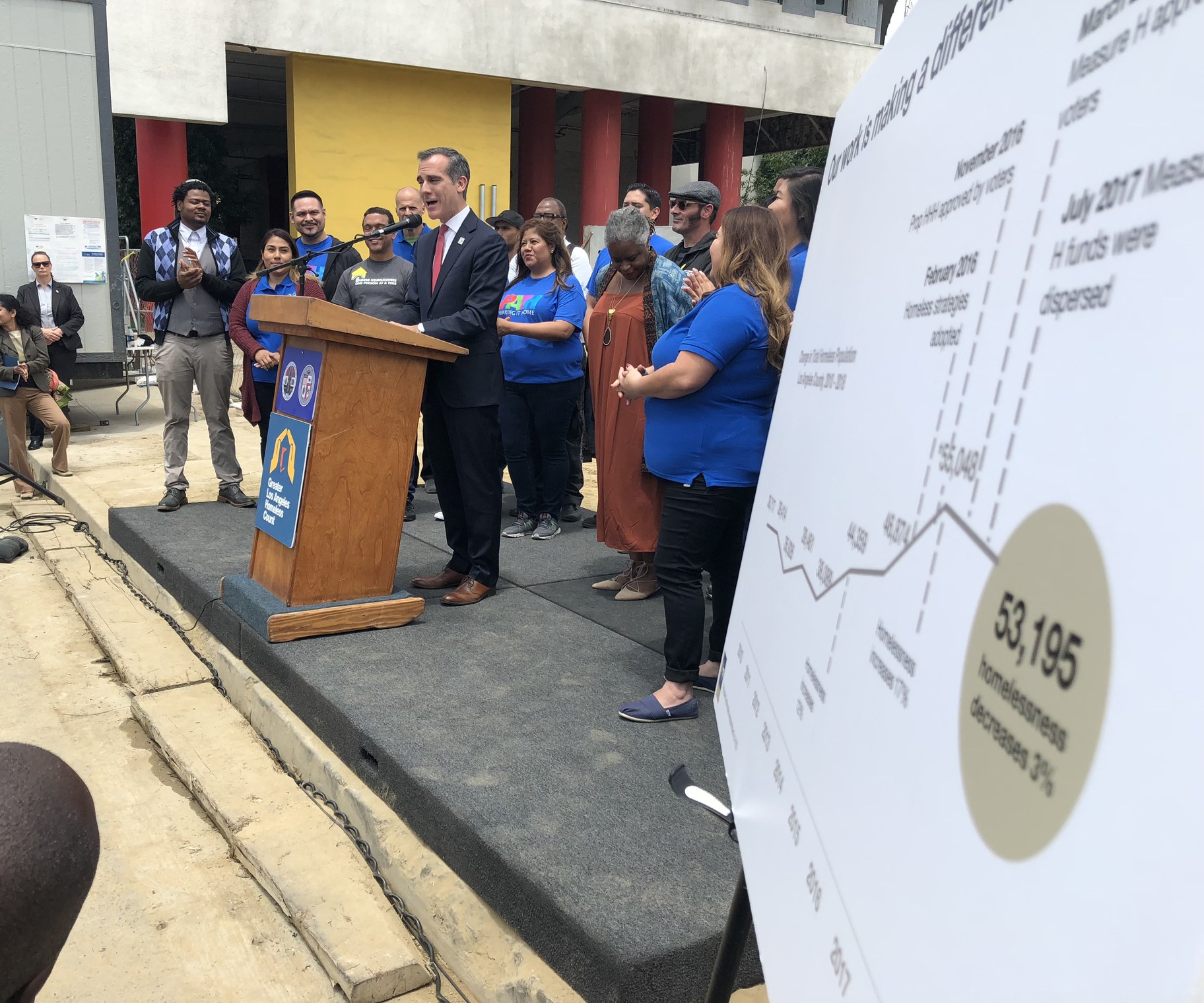 Mayor Garcetti speaks at a Prop HHH groundbreaking in May 2018. Photo by Saul Gonzalez.