The Porsche Taycan GTS Sport Turismo is an all-electric offering, with a starting sticker price of $133,300. It features 590 horsepower, and goes zero to 60 mph in under four seconds. Photo by Tod Mesirow.

The LA Auto Show is back in action after being canceled last year due to COVID. The show dates back to 1907, and this year, there’s a bunch of new car offerings spread out across the LA Convention Center. What’s changed is the gear under the hood — if there even is a hood or a fossil-fuel-burning engine under it. The spotlight has shifted from internal combustion engines (ICE) to electric vehicles (EVs).

“EVs don't really have an engine, and that's a big deal because all of a sudden there's a bunch more room,” says Tod Mesirow, who follows the auto industry. “That means you can redesign the vehicle in a pretty big way.”

Engine-less cars have fewer parts as well, meaning EV drivers don’t have to visit their mechanics as often (or maybe in the future they’ll be called automotive electricians). Newer models hold larger charges, too. 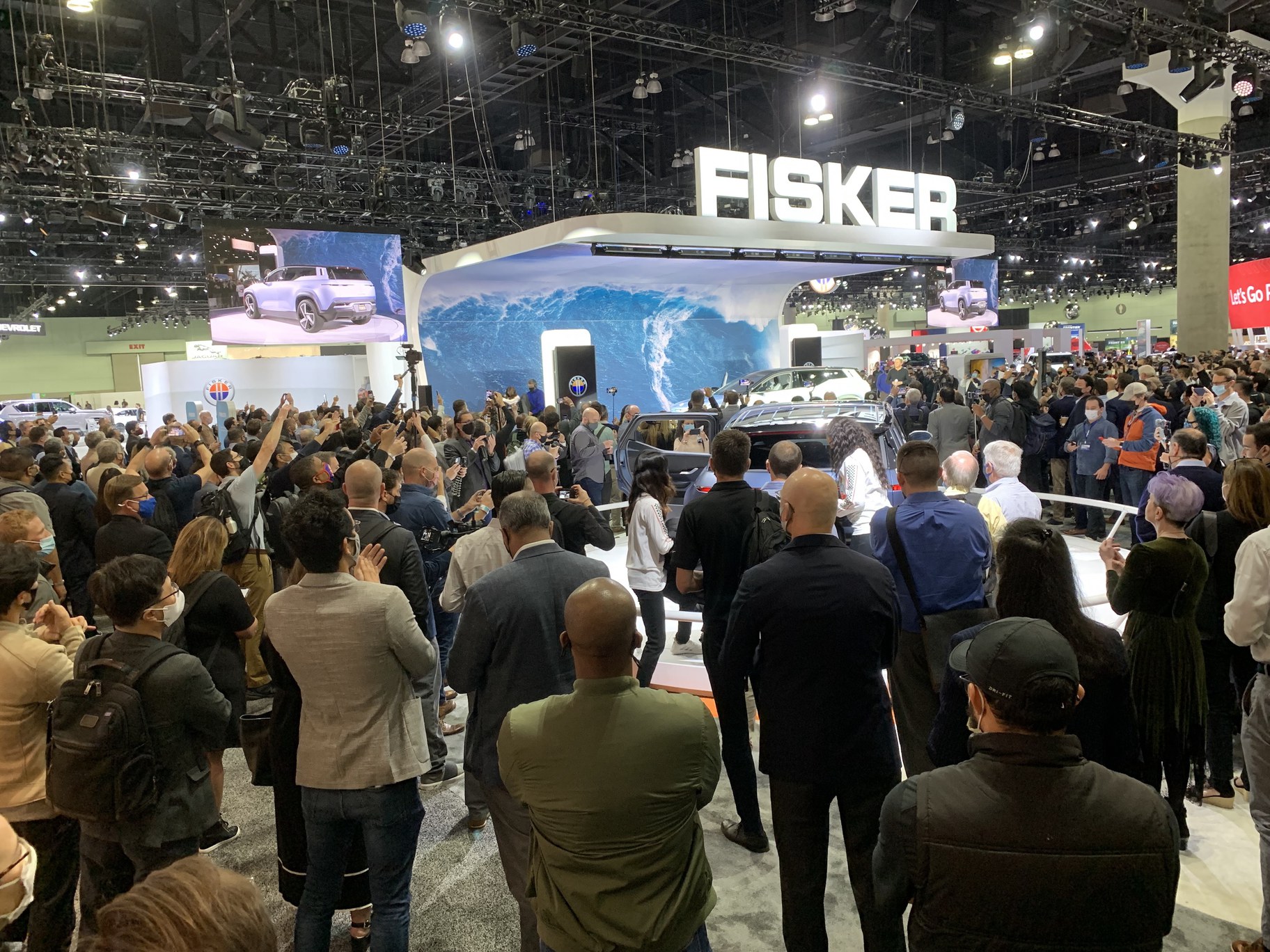 During media day, a crowd gathered around the unveiling of the first Fisker EV, the Ocean. Photo by @jimdonnellyphoto.

Lucid showed off the Air, which the company says gets 520 miles on a charge, along with the Dream Edition. Rivian, which is based in Irvine, is showing off its SUV, which starts at $70,000, and a pickup at $68,000.

Mullen, a new EV manufacturer with headquarters in Brea, says it expects delivery in 2024 of its crossover SUV with an anticipated starting price of $55,000. Ford is showing its fully electric F150 Lightning pickup truck. Toyota showed their first all-electric, the bZ4X. Fisker has its first all-electric car, the Ocean. And a new company called Canoo has what they call a “Lifestyle Vehicle” that it characterizes as “a loft on wheels.” 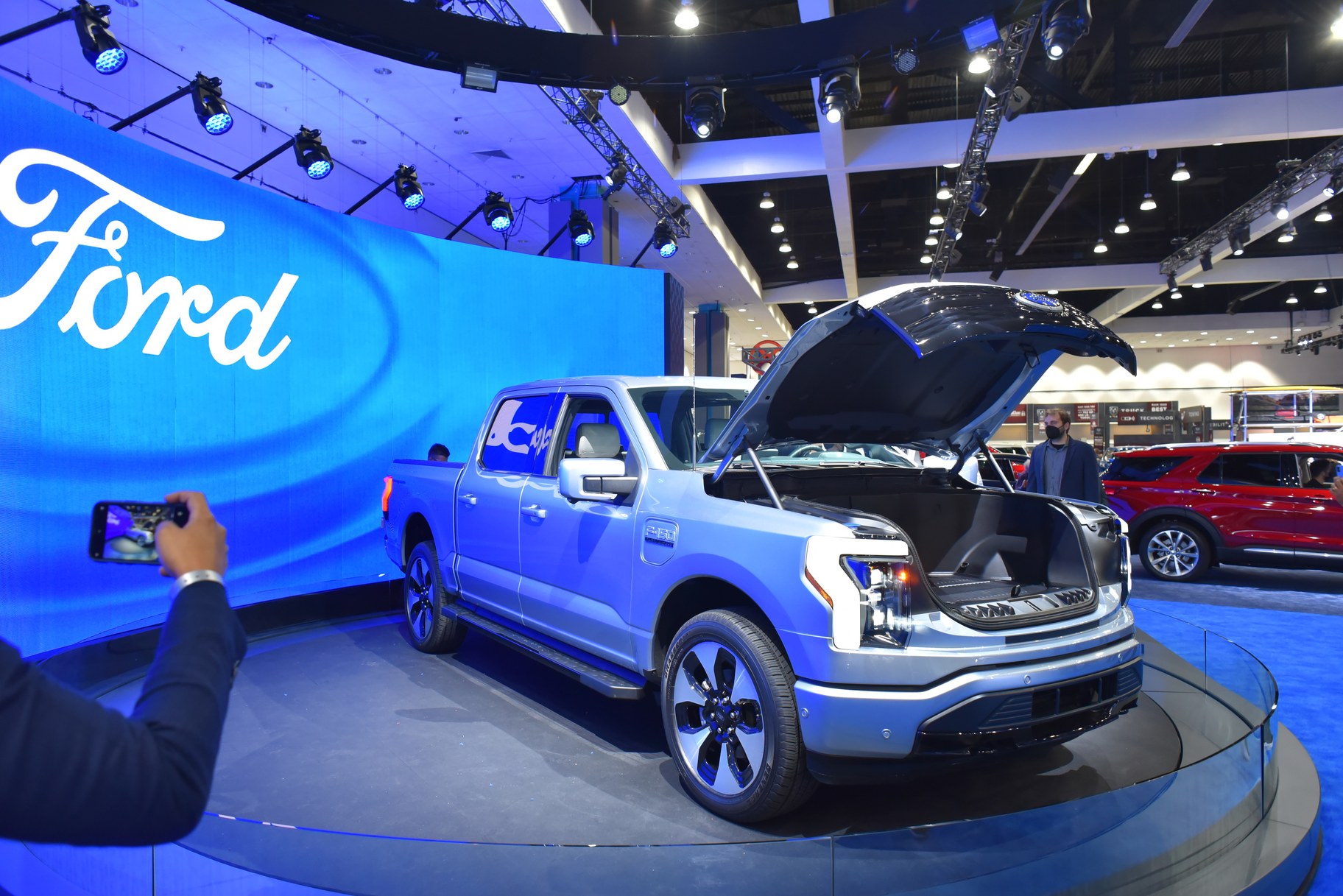 The Ford Lightning is a full EV with a starting price of $39,974.  Two variants are being offered — one with a 230-mile range, and another with an extended range of 300 miles. Ford expects the 563 horsepower to get the truck from zero to six mph in the mid-four second range. Photo by Tod Mesirow. 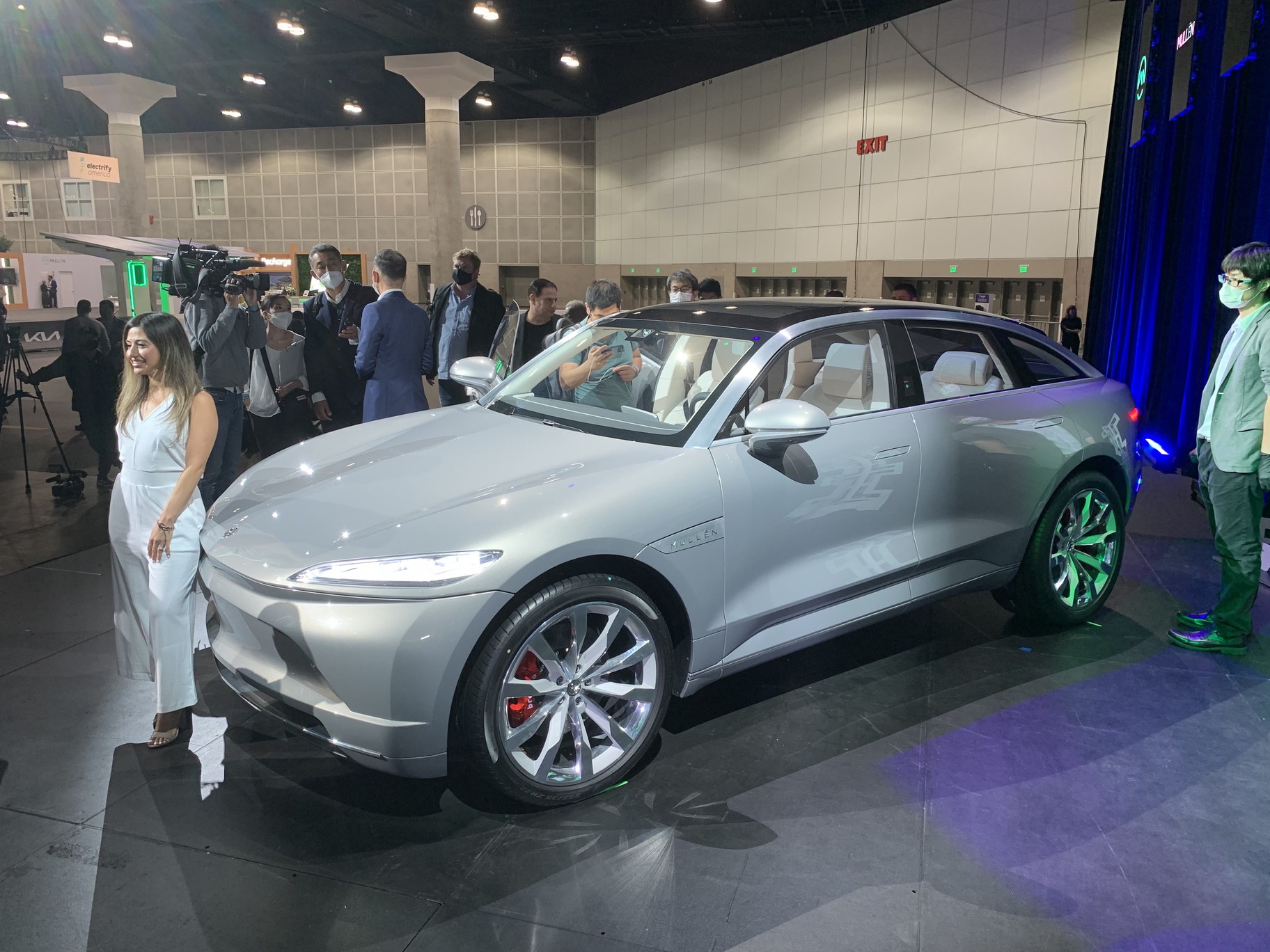 This is the world premiere of one of the two new Mullen EV SUVs.  Plans call for the cars to be made in Mississippi, and the company headquarters are in Brea, California. Photo by Tod Mesirow.

Despite the focus on EVs at the Auto Show, they still make up a small percentage of car sales. But Stephanie Brinley, an automotive principal analyst at IHS Markit, says that percentage will quickly go up.

“What's happened in the last 24 months is that automakers had to decide which way they were going to go. … [With] the Paris Climate Accord regulations getting stiffer, there is a push to this general direction,” she says, adding that most manufacturers don’t have enough money to do both EV and ICE very well. 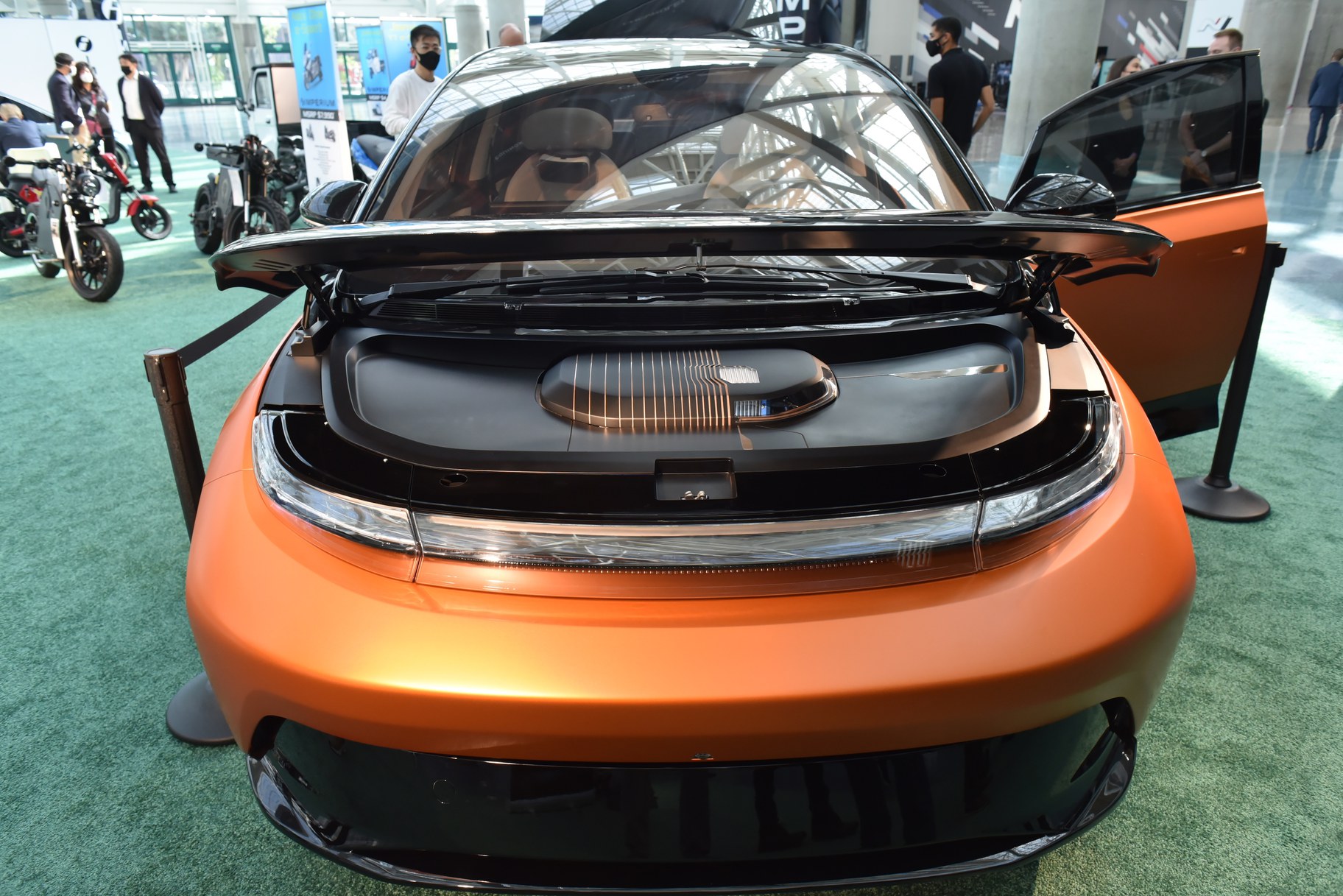 The Indie EV features a supercomputer under the hood where the engine usually sits in an ICE (internal combustion engine) car. Headquartered in Vernon, the Indie can be seen in the company's Beverly Hills showroom. Photo by Tod Mesirow.

“The first question is: Where does the energy come from that charges the car? Some states … have coal-fired electric plants, [which] means that an efficient gasoline engine may be less polluting than an electric vehicle that's been charging with electricity created in a polluting plant,” says Mesirow. “But luckily, we're moving in the direction of more renewable sources like solar and wind.”

Plus, 50% more water goes into building an EV than a standard internal combustion engine car, and what fuels the batteries causes environmental and human rights concerns.

“Seventy percent of the cobalt that's used in the batteries is mined in the Democratic Republic of Congo, where miners use hand tools, and the worker conditions would never come close to passing muster with OSHA (the Occupational Safety and Health Administration),” says Mesirow.

Manufacturers say these issues are getting addressed.

Meanwhile, another problem is a lack of easily accessible charging stations nationwide. Mesirow says $7.5 billion of the $1.2 trillion federal infrastructure bill is earmarked for building alternative fuel charging stations, and IHS Markit expects 400,000 chargers by 2026. IHS Markit also expects EVs to make up 40% of all cars sold by 2025. 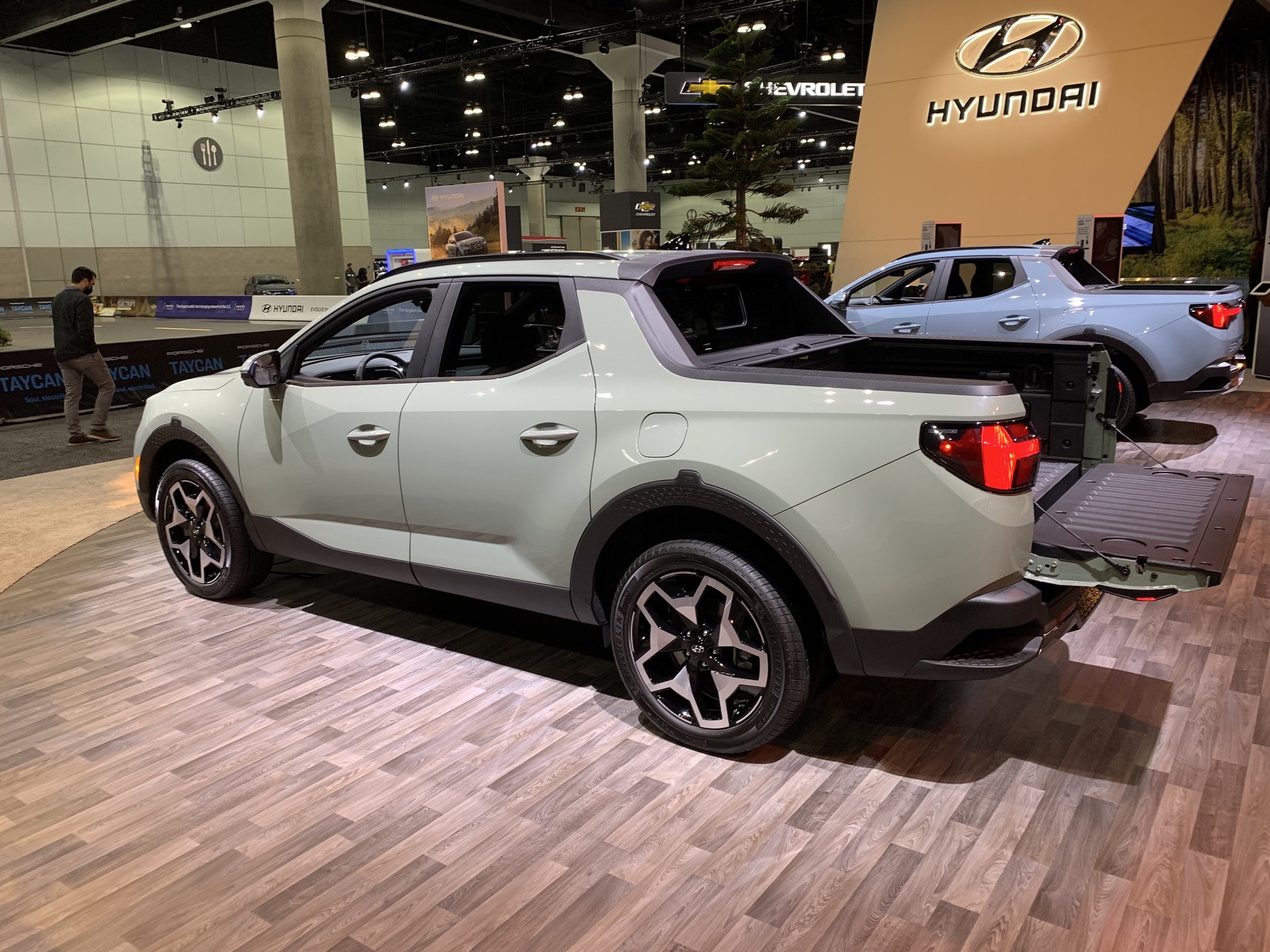 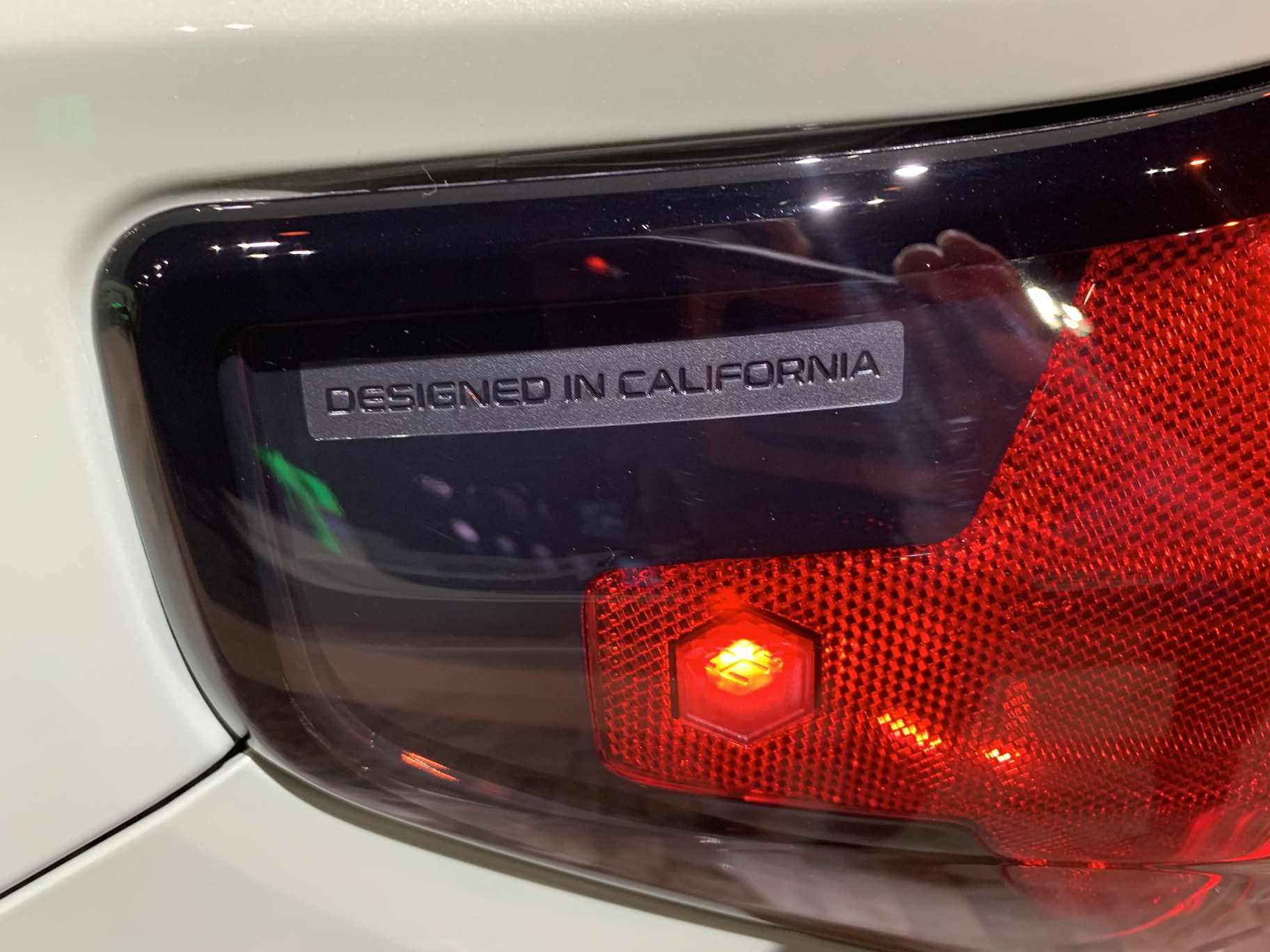 The taillight of the Hyundai Santa Cruz stamps the car with “Designed in California.” Photo by Tod Mesirow. 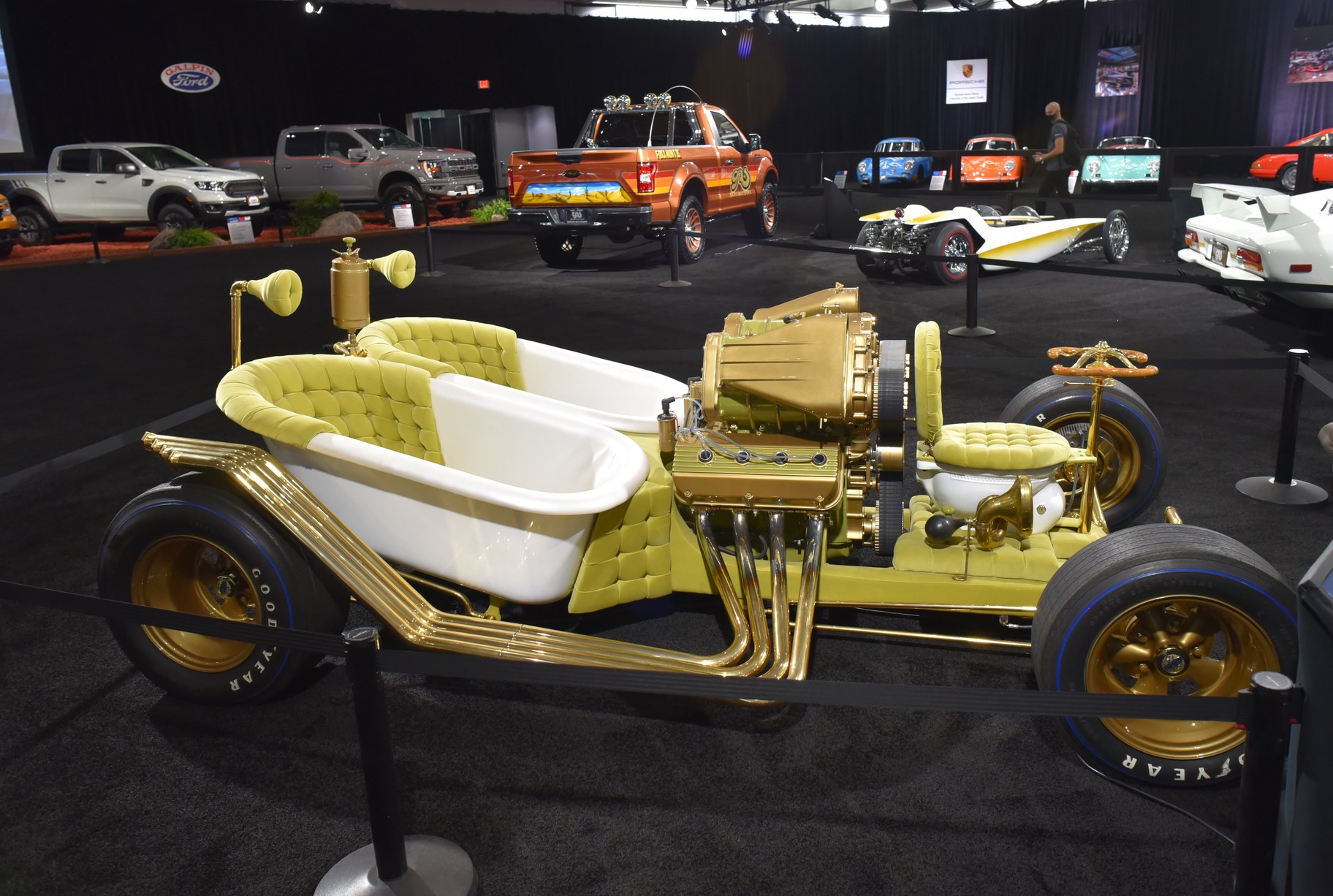 The Bathtub car can be seen in the Galpin Hall of Customs. Photo by Tod Mesirow.

Carson residents are coming home for Thanksgiving. Some say the odor persists

It’s been two months since Carson residents started smelling rotten eggs and getting headaches. LA County declared a state of emergency and paid for thousands of hotel...

The LA Auto Show is back in action after being canceled last year due to COVID, and the spotlight has shifted from internal combustion engines (ICE) to electric vehicles...

A couple of solo exhibitions in LA feature artists who mix landscapes with history, mythology, and more to create abstract paintings. One is at Smart Objects in Echo Park.