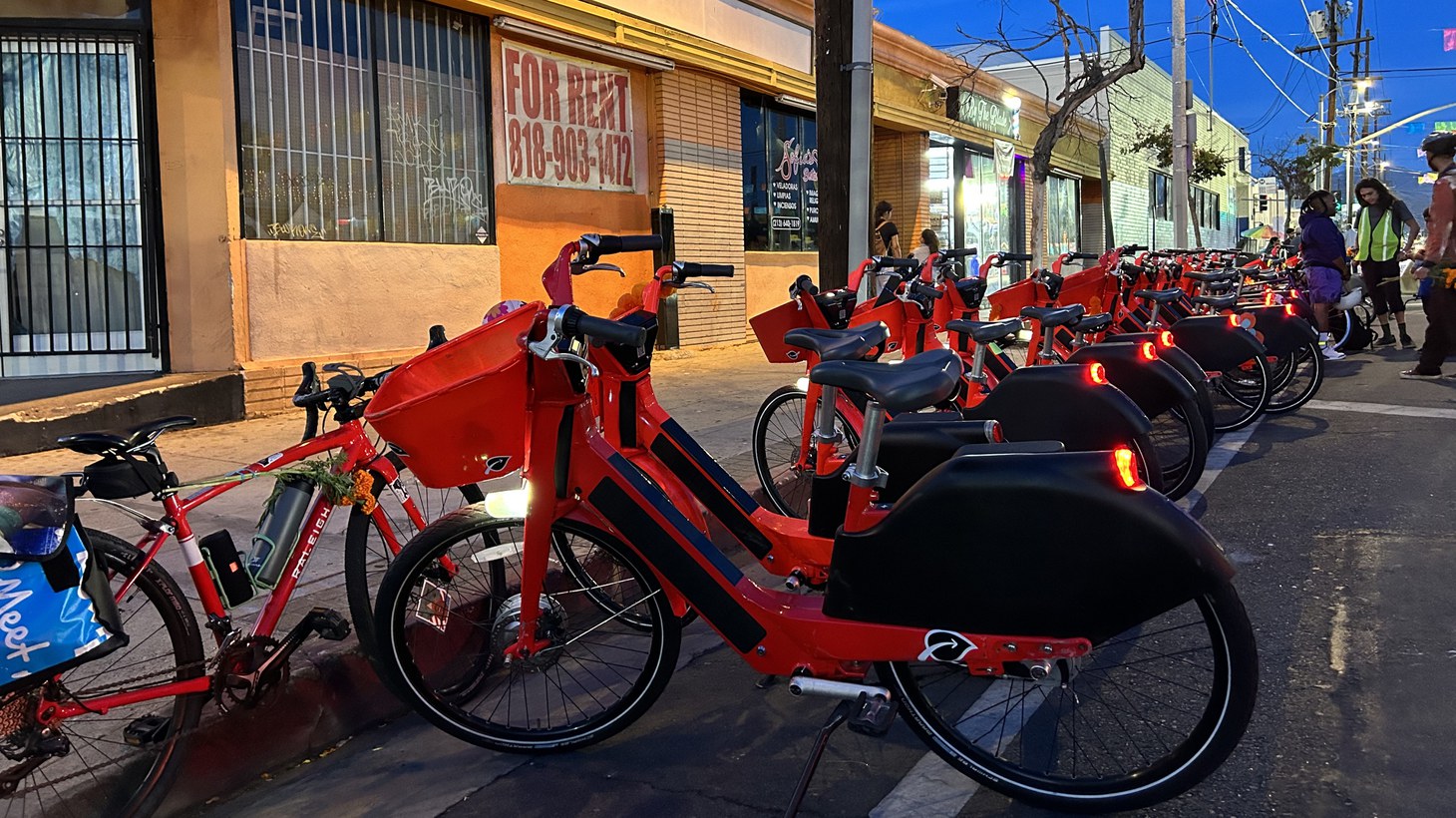 City planners eager to see more bikes and fewer cars on the road are offering a new approach to get people on electric bikes: a lending library. Instead of renting a bike for a single trip and paying by the minute, new programs in the San Fernando Valley, the San Gabriel Valley, and near the Port of Los Angeles allow months-long rentals for a minimal donation.

In Pacoima, bright red e-bikes – former Jump bikes donated by Uber – are available for up to nine months with a $20 donation. The Electro-Bici program is funded by a $500,000 grant from LADWP, part of an effort to reduce emissions in Harbor and Northeast San Fernando Valley communities that have historically been hit by pollution from truck traffic and refineries.

“It really is meant for community members to use whenever they want, whenever they need, and to really feel like a cyclist,” says Electro-Bici Manager Melisa Walk.

But it’s uphill for Electro-Bici so far. The program launched last summer, but so far has only nine riders enrolled. They aim to sign up another 20 this month, and hope to have 80 bikes out in the community by the end of the year.

First, Southern California’s car culture. “We have a really toxic road culture where we do not take good care of each other,” says Adonia Lugo, equity research manager at UCLA Institute of Transportation Studies. “There’s an us versus them mentality that we bring to our streets.”

LA has made efforts to improve bike infrastructure, but progress has slowed. Under former Mayor Antonio Villaraigosa, the city built up to 200 miles of bikeways a year, but that number has dropped. Last fiscal year, Streetsblog LA reports only about 26 miles of bikeways were built and 12 miles were upgraded.

The second problem will be familiar to those wrestling with infrastructure for electric cars: An e-bike is only useful when the battery is charged. And the bikes Electro-Bici uses can’t be charged at home.

“We do battery swapping at our bike shop because there's a lot of proprietary parts on them,” Walk explains. “So we have to use a special key to unlock the batteries, and then we use special chargers to charge the batteries.” Walk says they have 100 e-bikes, but only 28 battery chargers. 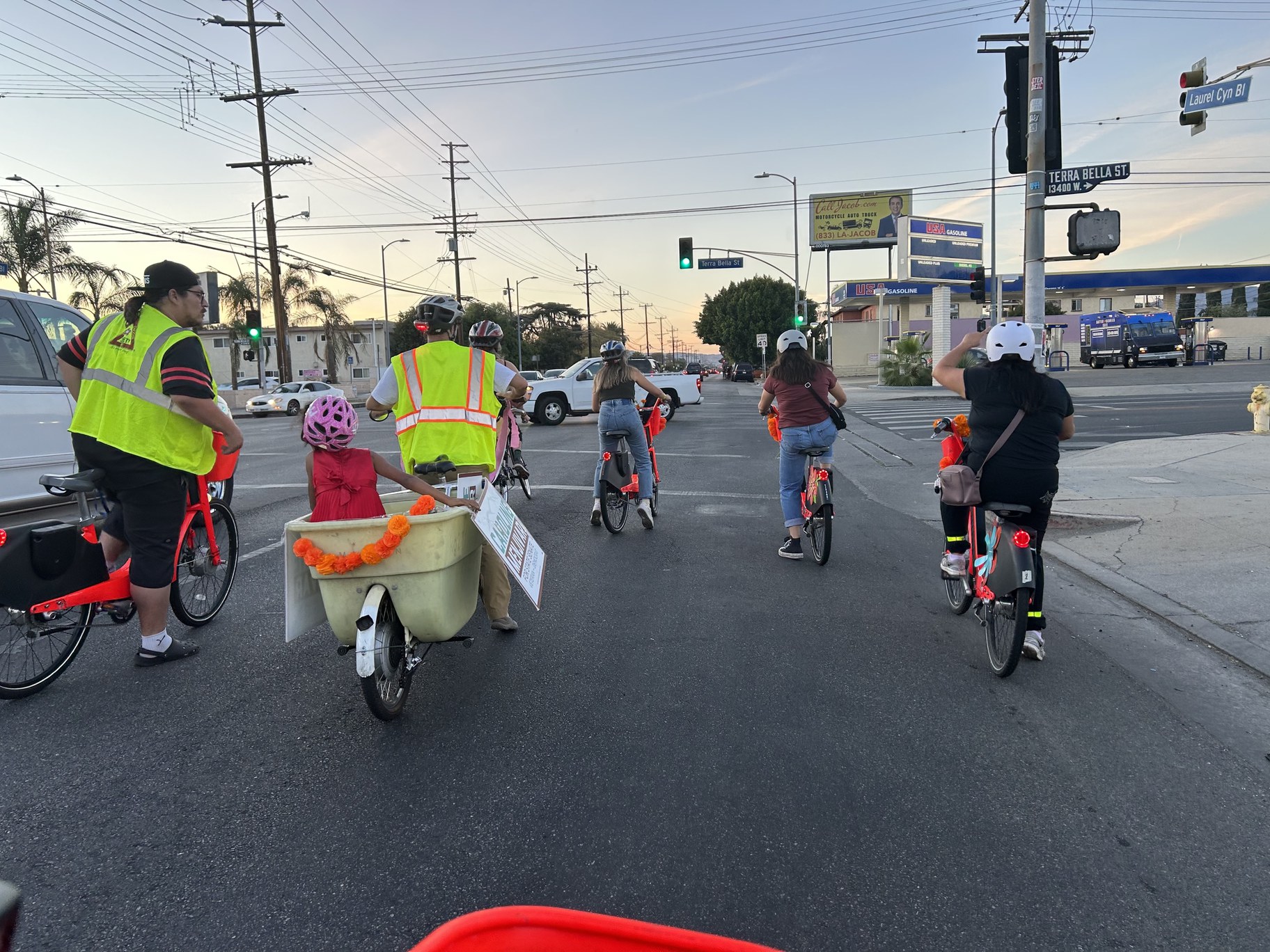 Electro-Bici is an e-bike lending library based in Pacoima. The program holds community bike rides as a way for people to test out their fleet of e-bikes. Photo by Andrea Bautista/KCRW.

Saad Ladhani, a student at Woodbury University in Burbank, checked out an e-bike in the summer. He says it made errands easier, but getting to Pacoima for the battery swap was hard.

Walk says the nonprofit is starting to look for money to buy different bikes that can be charged at home.

Other e-bike libraries are hoping for a faster start.

Bike LA, which received the same grant as Pacoima Beautiful, created an e-bike program for small businesses near the Port of Los Angeles. Participants can use the e-bike at no cost for six months and then have a chance to buy their bike.

“The bikes that we are working with retail for around $1,600 before tax,” Bike LA’s Deputy Director Kevin Shin says. “We made it possible … for the participants to purchase the e-bike that they are using at a discounted rate of $800.”

An e-bike lending library hopes to get people out of their cars in the San Fernando Valley. But it’s an uphill battle.

Your gas bill could triple in SoCal. What to do?

The wholesale price of gas is way down in most of the U.S. and Europe. So why are prices in CA spiking, and what can you do to weather this increase?

Last November’s elections brought slim conservative majorities to the Orange and Capistrano school boards. In recent weeks, there have been major shake-ups and firings in...