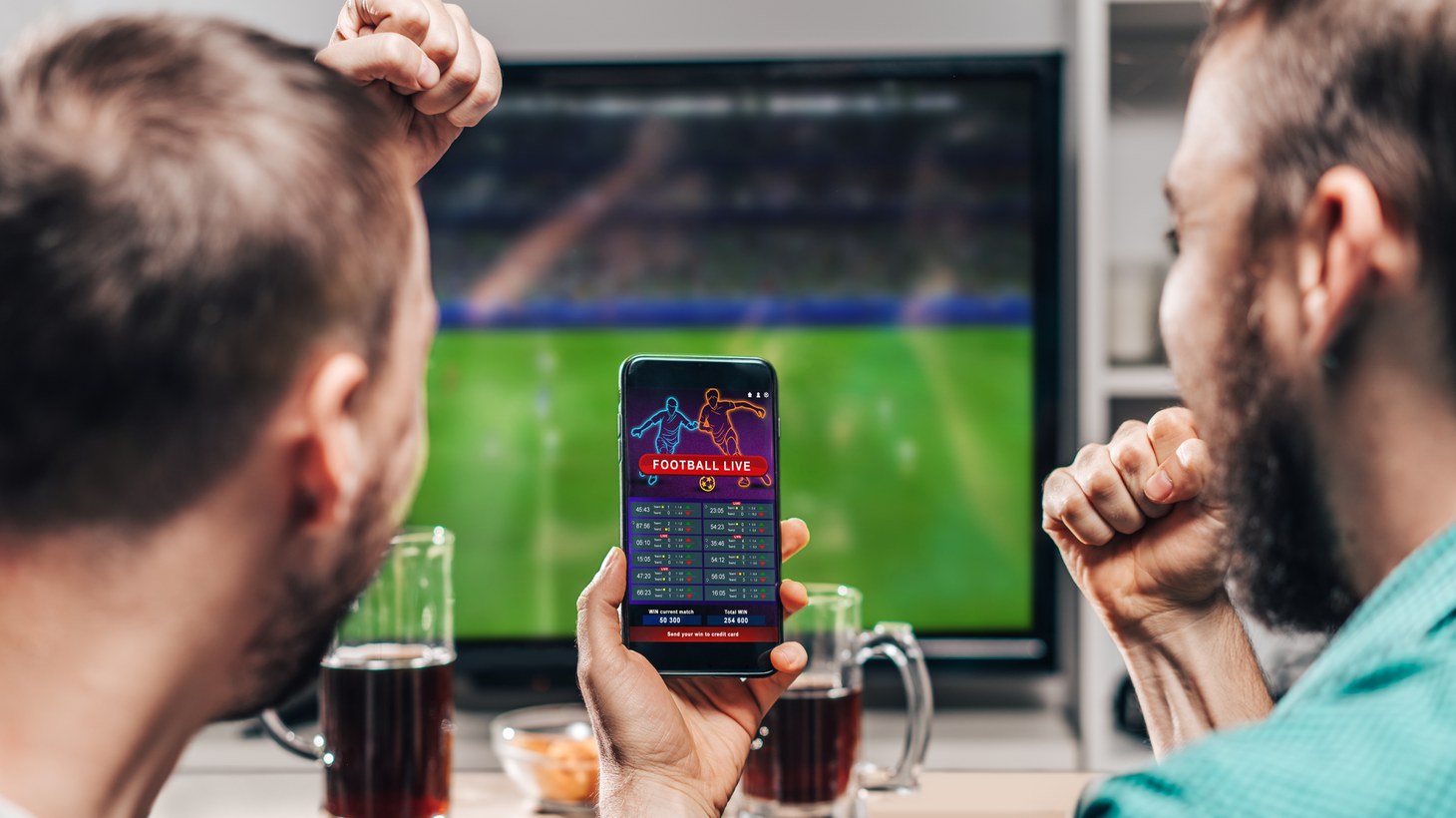 A measure on the Novemmber ballot would allow online gambling via smartphone or other digital device, anywhere and anytime. Photo by Shutterstock.

In 2018, the U.S. Supreme Court struck down a ban on sports betting in most states in the country, and since then, more than two dozen states have legalzied some form of gambling on athletic competitions.

But if you want to wager legally on sports in California, you still basically have one choice: horse racing, at places like the historic Santa Anita Park Racetrack in Arcadia.

Santa Anita opened in 1934 and still attracts devoted fans of racing and betting like Stanley Duran, who comes as often as he can.  For him, the track is a home away from home.

“I mean I like to gamble. It’s entertainment for me. More gambling, more fun,” says Duran.

But sports betting in California could soon explode far beyond the racetrack, with legal wagering allowed on pretty much all professional and college competitions.

A ballot measure backed by Native American gaming tribes would allow sports betting in reservation casinos and horse racing tracks. It has qualified for the November ballot.

Meanwhile, a competing measure is also on the ballot. It would allow online gambling that you could do from a smartphone or other digital device, anywhere and anytime. It’s backed by online sports betting companies like FanDuel, DraftKings and BetMGM, which say they’re ready to spend more than $100 million to pass the ballot measure.

At Santa Anita, gambler and sports fan Daniel Chavez loves the idea of being able to bet on something other than horses.

“I think it’s awesome that we could bet on any kind of sport,” says Chavez.  “It’s not hurting nobody. If you want to make your money, you should be able to spend it in the way you want.”

But there’s a group of Californians who deeply fear the prospect of sports betting becoming legal in the state and the damage it could do to their lives. They’re recovering gambling addicts, likeHarold A., who didn’t want to use his last name to protect his privacy.

Harold, who’s been in recovery for decades with the help of Gamblers Anonymous, says his addiction nearly destroyed his life, as debts mounted and family ties broke.

“I was the hamster on the wheel. I was running from the card room to the racetrack to the cocaine dealer,” says Harold. “I mean, I had every seat on the Titanic, as they say in recovery, and no seats were any good.”

Harold fears legal sports betting could tempt him and others in addiction recovery back to reckless gambling. “My reaction personally? I'm worried, I'm worried,” Harold says.

Harold’s also worried a new generation of gambling addicts will be created, lured into sports betting by the ease of mobile wagering combined with glossy marketing campaigns the gambling industry has already unveiled in other states.

The campaigns feature a who’s who of Hollywood and sports celebrities, like Ben Affleck, Kevin Garnett, Drew Brees, and Jamie Foxx, all hawking the rush of sports betting.

Dr. Timothy Fong, co-director of UCLA’s Gambling Studies Program, says about 1% of California residents have a gambling problem. “Now, one out of 100 people, it doesn't sound like a lot,” says Fong, “but that's about the same percentage of men and women with bipolar disorder or schizophrenia or severe psychosis in the state of California.”

Fong says those most vulnerable to gambling addiction are the people who can least afford to lose money, like the poor and those with untreated psychiatric conditions and personal trauma.

Is the state prepared?

The California Department of Public Health has an Office of Problem Gambling that connects people falling into addiction with counseling services. When asked for this story about what the state is doing to prepare for a possible future where sports gambling is legal and fueling higher addiction rates, office director Robin Christensen and a Department of Public Health spokesperson demurred.

Later, the agency said by email that it’s consulting with other states that have legalized sports gambling about their experiences with addiction, but no details were provided.

California’s $4 million a year gambling addiction budget is underwritten by the gambling industry.

Recovering gambling addict Harold A. thinks that creates a conflict of interest and that the $4 million is peanuts.

“That's a drop in the bucket,” says Harold. “We're talking about billions of dollars. This is a billion dollar industry.”

The political push for more gambling

Meanwhile, with sports betting measures on the November ballot, the gambling industry is trying to build wider political and public support for the idea of wagering on athletic competitions.

The backers of the ballot measure that would legalize mobile betting promise that taxation of gambling revenue plus money earned from licensing fees will go to fund housing and mental health programs for the state’s homeless.

That earned legal sports gambling the support of some big city California mayors, like Robert Garcia of Long Beach.

“For us, it’s all about homelesness dollars,” says Garcia. “When we heard that this initiative was looking into putting dollars into ongoing services, and cities would get substantial revenue, I think a lot of the mayors were very interested in this.” 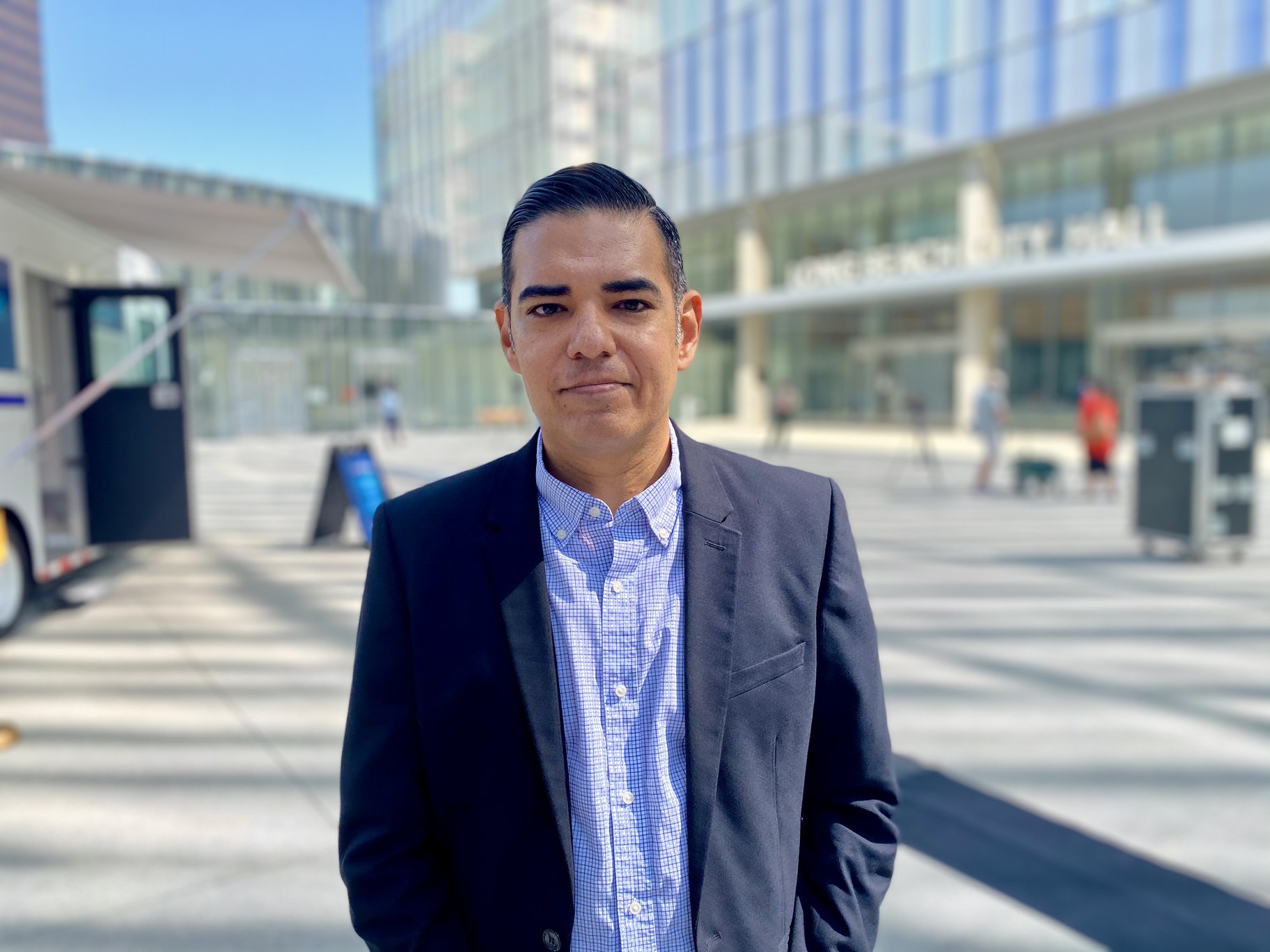 Mayor Robert Garcia of Long Beach is a proponent of legalizing sports gambling in the state — if some of the betting revenue can be used to fund homeless services. Photo by Saul Gonzalez.

Gambling industry critics say whatever betting revenue is spent on fighting homelessness isn’t a good trade if it leads to more addiction. Critics also say the money would just be a tiny fraction of what the industry could earn in the state.

If sports gambling does become legal in California, one study predicts $30 billion in bets could be wagered annually.

That’s why the gambling industry calls California “the holy grail” of sports betting.

Two November ballot initiatives would legalize sports betting in California. They could provide a windfall for the state, but gambling addicts are worried.

Bars might be able to stay open for longer hours — if a new California bill is signed into law. Plus, a new state program means people must be certified to pour those drinks...