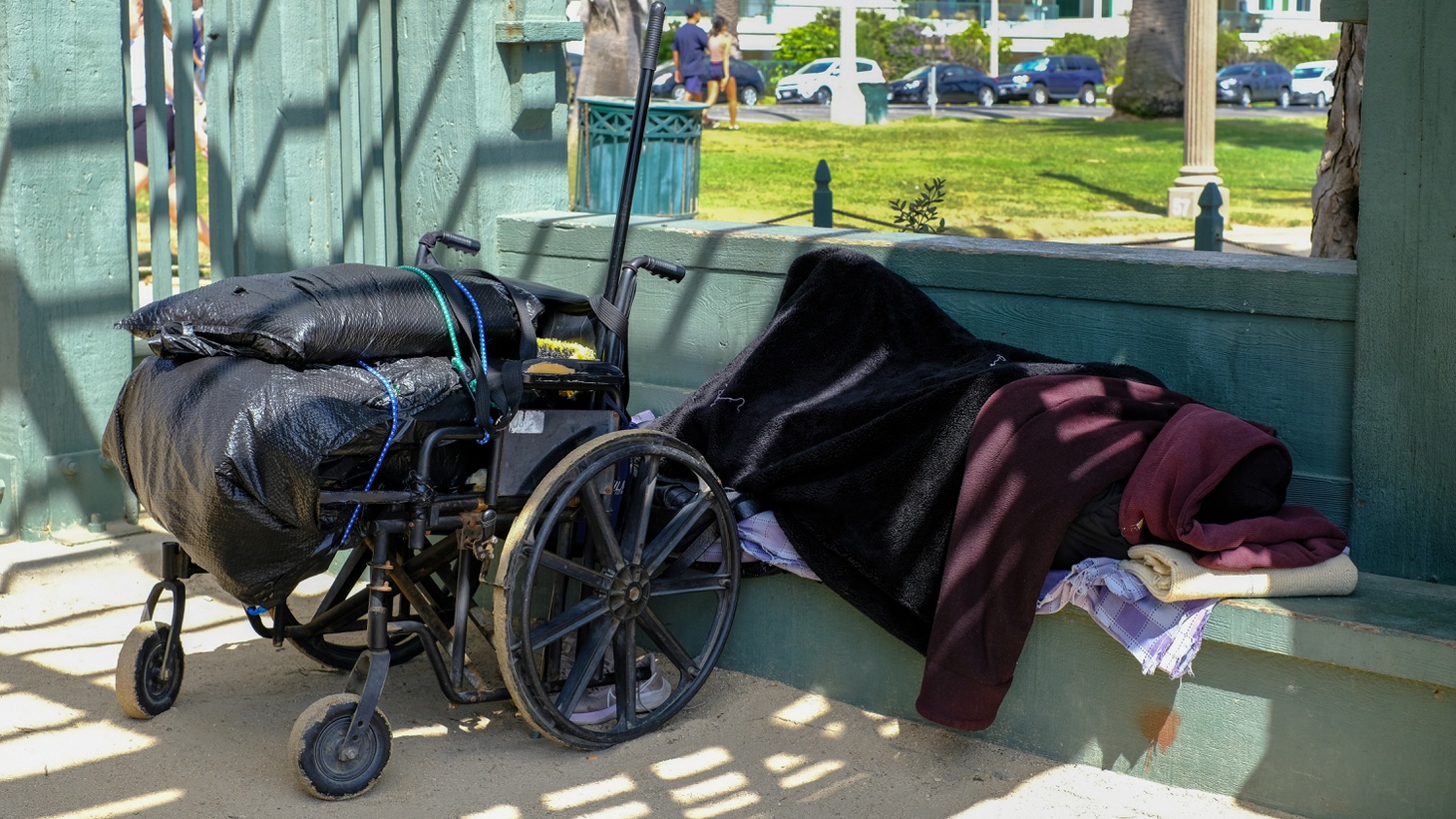 An unhoused person sleeps on a bench in Palisades Park, Santa Monica, July 25, 2022. “Everything starts with outreach — finding an individual with severe mental illness who is living on the streets, building a bond with them, building a therapeutic alliance, or relationship of trust,” says Dr. Shayan Rab, a street psychiatrist with the Los Angeles County Department of Mental Health. Photo by Amy Ta.

Thousands of people with mental illness are experiencing chronic homelessness in LA. But if you’re living on the street, you probably don’t have access to regular, high-quality psychiatric care.

A new “street psychiatry” program from the Los Angeles County Department of Mental Health wants to change that — by meeting unhoused people where they are.

The program embeds psychiatric professionals with the county’s existing outreach teams, allowing them to do visits and tests in the field, administer medication, and provide follow-up care to folks suffering from untreated mental illness.

Dr. Shayan Rab, a street psychiatrist with the Los Angeles County Department of Mental Health, started developing the program three years ago, and is one of five psychiatrists currently on the team. He says one of the benefits of this street-level care is the trust it helps foster with patients.

“Everything starts with outreach — finding an individual with severe mental illness who is living on the streets, building a bond with them, building a therapeutic alliance, or relationship of trust,” says Rab. “That is difficult to do on the streets, especially if there's a lot of trauma involved.”

Once a relationship is established with the patient, he says, mental health professionals can help prescribe them medication, and will often return multiple times to make sure their recovery is staying on track.

Eventually, outreach workers will attempt to move the individual into temporary shelters, and then hopefully to more permanent housing.

Reporter Doug Smith, who profiled Rab for the Los Angeles Times, says this differs greatly from the way mental health care is typically provided to unhoused individuals in Los Angeles. Instead of putting people into a temporary hold in an emergency room and then releasing them back into a shelter, placing patients with shelters gives them a chance to stabilize.

“When Dr. Rab sees somebody on the street, his process is to get them into a stable setting first, and use that as a base to figure out what is really the kind of placement they need for the long term,” says Smith.

Patients with severe mental illness who don’t voluntarily accept care are sometimes placed under a temporary conservatorship, which puts them in the hands of someone else — a relative, or often in the case of unhoused individuals, a county-appointed guardian.

This requires court proceedings, and Rab’s street teams now have the ability to conduct those proceedings remotely. Using conservatorships as a way to place unhoused individuals with mental illness into involuntary treatment plants may become more common under California’s new CARE courts plan, which the governor signed today.

Some civil rights groups and unhoused advocates have expressed concerns about the plan, which they say would force individuals into a broken legal system. Rab says he uses the conservatorship tactic with caution.

“Conservatorship is something that we take very, very seriously because it does involve taking someone's rights away,” says Rab. “But at the same time, it also does guarantee some safety for someone who is unable to really care for themselves, including access to food, clothing, and shelter, without which their life could be in danger.”

Experts estimate that tens of thousands of people experiencing homelessness in Los Angeles are struggling with their mental health, according to Smith’s article. The current team of street psychiatrists can’t take on all of these patients at once, but the program is expected to grow into one of the most robust of its kind in the nation.

Rab hopes the work they are doing now will create a model for how psychiatry can be better incorporated with the other services the county has to offer unhoused people.

“The more education there is about the barriers that are pressing for this population, the more there will be a synchronized approach into getting these folks along a path of recovery into housing and in safe community living.”

Amid CA drought, what’s the future of water-loving crops like tomatoes?

Tomatoes grown in greenhouses use 90% less water than ones grown outdoors. Why isn’t it catching on in drought-stricken California?

LA is developing one of the most robust “street psychiatry” programs in the nation. The goal is to meet unhoused individuals experiencing mental health issues where they are.