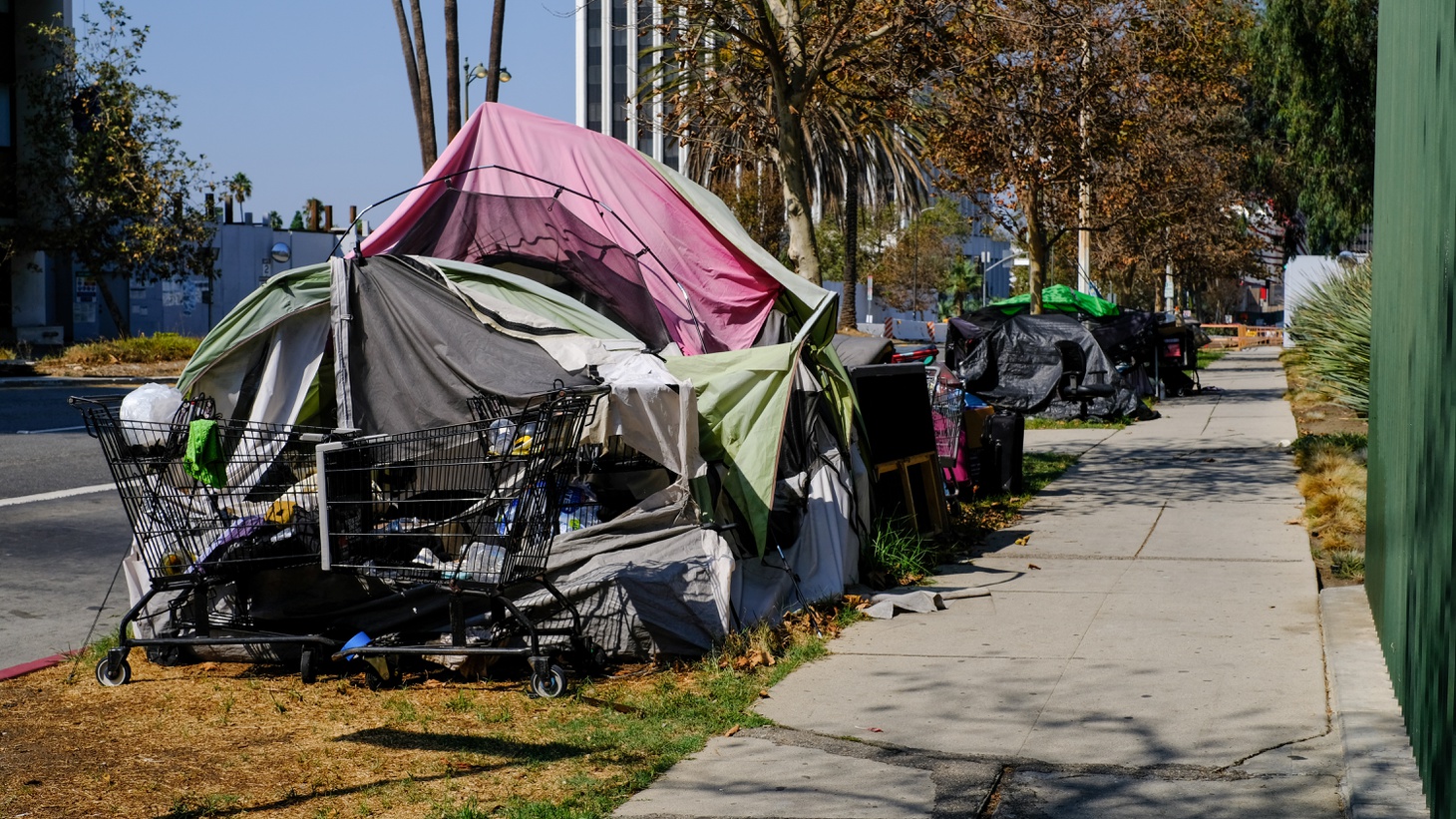 Christabelle Sanchez says that when she found out she would be moving into a hotel room under the City of LA’s new “Inside Safe” program, she cried for a full day.

The mother of two, who lived at an encampment in Venice, hasn’t seen her kids in about five years. She hopes having a stable place to live will serve as a stepping stone towards reuniting with her family.

“I just want to get an apartment, and I want to be able to go to therapy again,” says Sanchez. “Because there's a lot of situations that happened to me out here … that I still have to work through to fix myself, in order to be able to get my little girl back. So I’m going to do the necessary steps to get there.”

She’s one of more than 100 people who have been brought indoors so far under Mayor Karen Bass’s new initiative, which aims to house people living outdoors and in tents, and not just provide temporary shelter. Bass says the goal of the program is to clear the city’s “highest need” encampments by offering residents housing and services.

Now, as Sanchez settles into a converted motel room in the West Athens area of South LA, she and others are questioning how fast that permanent housing will come in a city that’s severely lacking in affordable units.

“They haven't said nothing about [permanent housing] yet,” says Sanchez. “I'm just waiting to see what they say.” 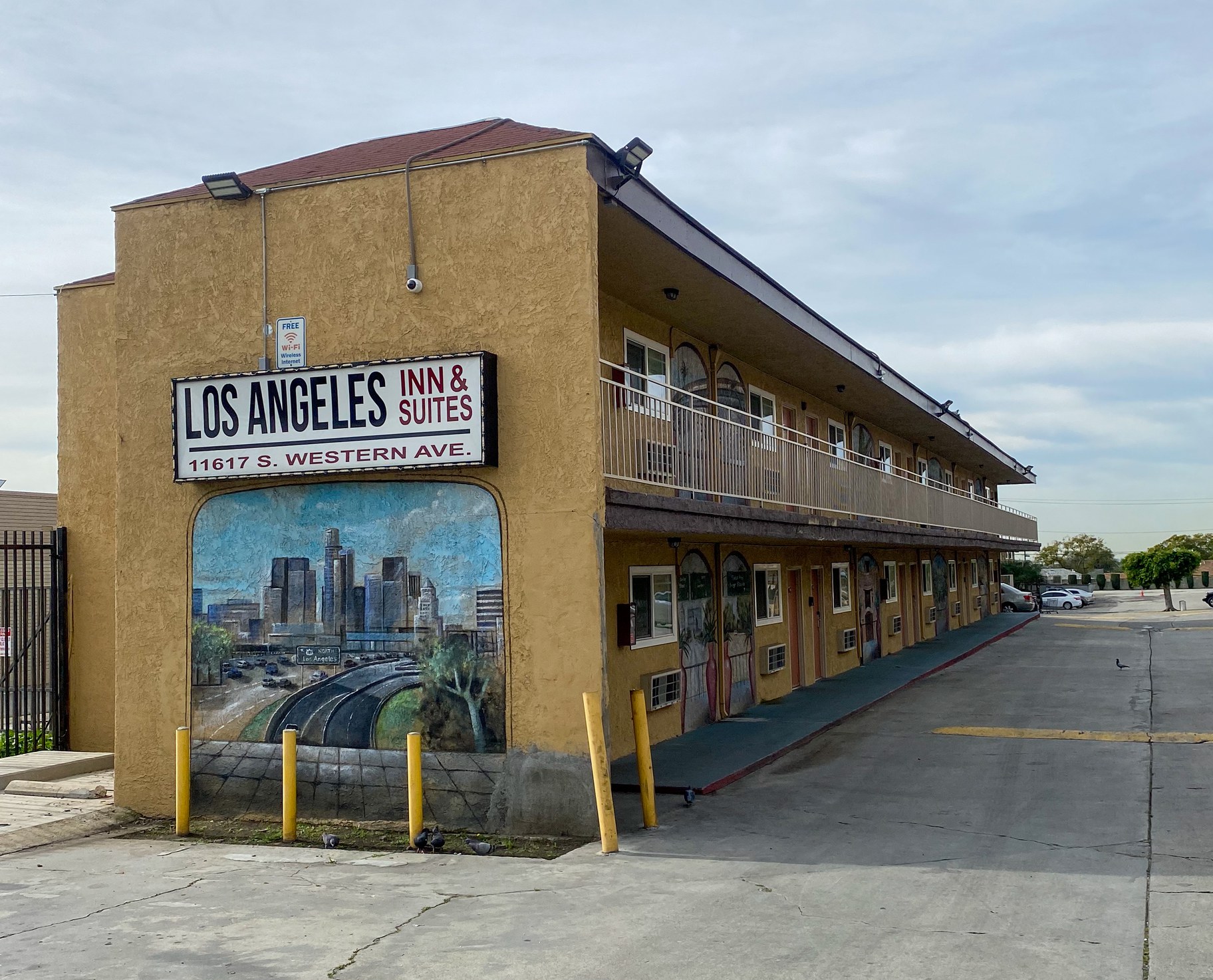 Many residents from the dismantled Venice encampment were moved to rooms at the Los Angeles Inn & Suites, a budget motel in the South LA neighborhood of West Athens. Photo by Zoie Matthew.

Sanchez moved to the motel after a multi-day operation in Venice dismantled her previous encampment. The encampment clearing, which took place near a large Google office on Main Street, targeted a group of tents surrounding a city-run local shelter.

Bass teamed up with Councilmember Traci Park to execute the operation. Outreach workers from the nonprofit St. Joseph Center made the rounds offering motel rooms and shelter beds, and residents got a two-week deadline to accept an offer or leave the area. Those who did accept had to pare down their belongings to two bags, and relinquish their tents and other items on-camera.

Some expressed concerns about giving up their things when they were uncertain that housing would last. Rebecca Dannenbaum, who had lived at the encampment for about three months, accepted a bed at the nearby Bridge Home shelter. She says she saw many friends wind up back outside with nothing, when Project Roomkey motels closed after sheltering people during the pandemic.

“They pull the rug out from underneath them, and now they're back out on the street, and now they've lost their street skills,” says Dannenbaum. “And now they've gotten a taste for something that they can't have, never could have, and shouldn't have been teased with.”

Others were concerned about leaving the Venice community behind. A man who went by the name of Haywire was placed in a room nearly 15 miles away at the Los Angeles Inn and Suites in South LA, the same motel where Sanchez got a room. Getting back takes more than an hour by bus.

“I get my suboxone here, I get my counseling, I get my meds here, all my support groups are here. This is a therapeutic environment for me,” he says. “I don’t think it’s cool that they’re throwing me all the way over there. I think they’re doing it just to get rid of us.”

But during the more than week-long clearing operation, 96 of an estimated 100 encampment residents ultimately accepted housing. And for many, going indoors has been a relief — especially during the recent bout of rainy weather.

Savannah Moran says by the time she accepted a room, most of her clothes and shoes were too waterlogged to keep. “I’d rather be over here than over there, because over there it’s probably flooded right now.” 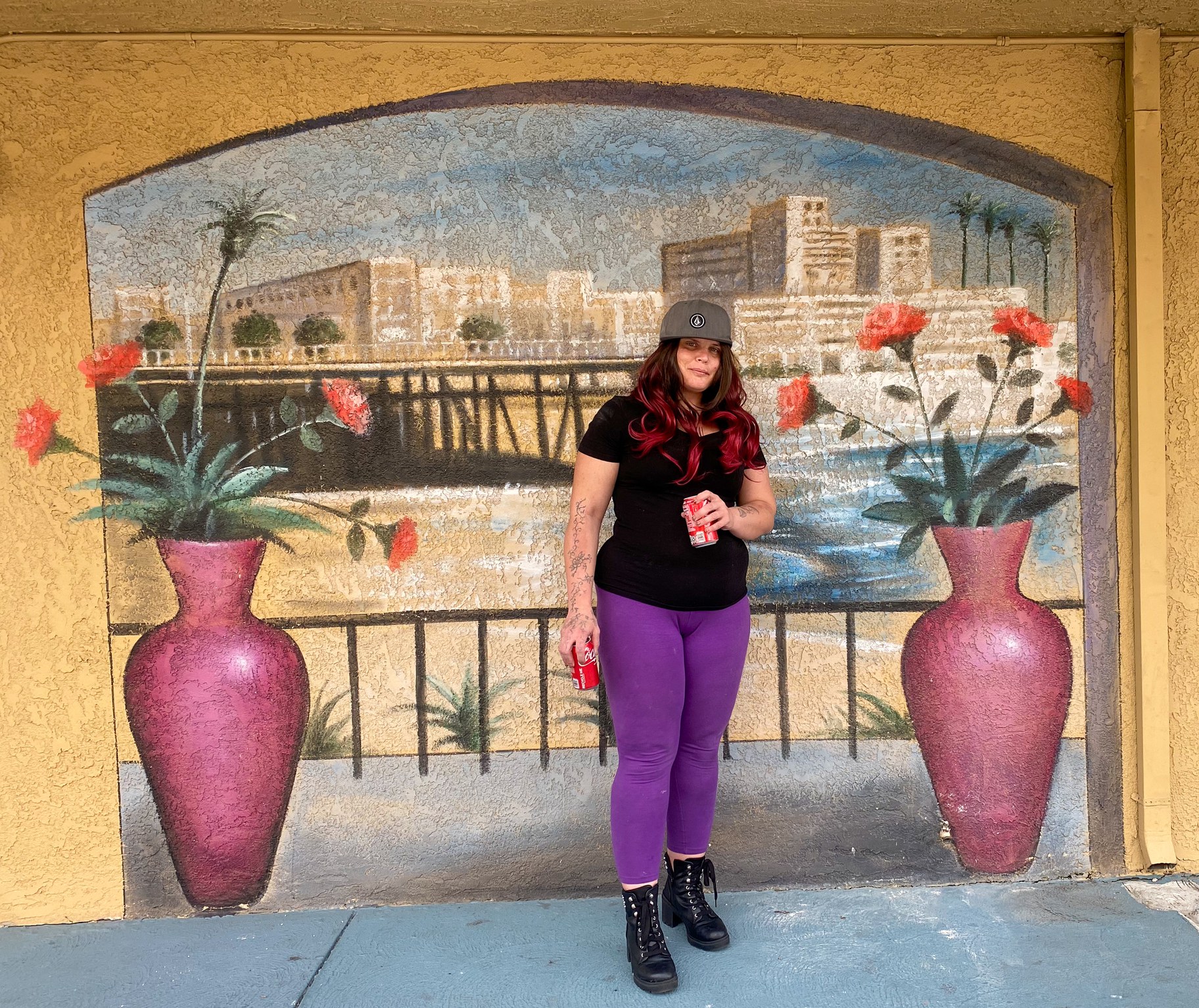 When Savannah Moran moved into a room at the Los Angeles Inn and Suites, she only had her bike, phone, speaker, and stuffed animals. Most of her other belongings were destroyed in a recent storm. Photo by Zoie Matthew.

Another woman named Daniela, who doesn’t want to give her last name, says she was happy that many of her friends from the encampment also moved into the Los Angeles Inn and Suites. But she hopes the promised permanent housing will arrive quickly. Right now, her two kids are staying back in Venice with their grandparents, and visitors are not allowed at the motel.

“They don't do children right now,” she says. “I'm hoping that they can help me with the family solutions later on. For now, I'm just taking this opportunity and going with it.”

St. Joseph Center officials say that there are provisions for “Inside Safe” participants to stay housed and receive services for up to two years. The organization's CEO Va Lecia Adams says the next step is for case workers to establish a relationship with participants.

“We start to meet one-on-one with each of the residents and folks that have moved in, and start to get a better sense of their needs, get an understanding of the last time they were housed, the last time that they were employed, what they really want for their lives, and to begin to establish a plan and strategy for them to get back on their feet,” says Adams.

Adams says the goal is to start moving people into permanent shelter in about three to six months. But this process can be time-consuming and confusing for unhoused residents.

A man named Israel, who moved into the Los Angeles Inn and Suites before Inside Safe launched, says he’s been trying to navigate the process for seven months already.

“Supposedly my Section 8 voucher application several times has been lost or the paperwork wasn't done, or somebody something,” he says. “Just a lot of things that I don't really understand.”

He felt less hopeful about the living arrangement than some of the newer residents, noting that strict rules prevent people from even entering each others’ rooms.

“You have grown people living in a hotel room, and these people are telling us we have restrictions like a 12-year-old kid,” he says. 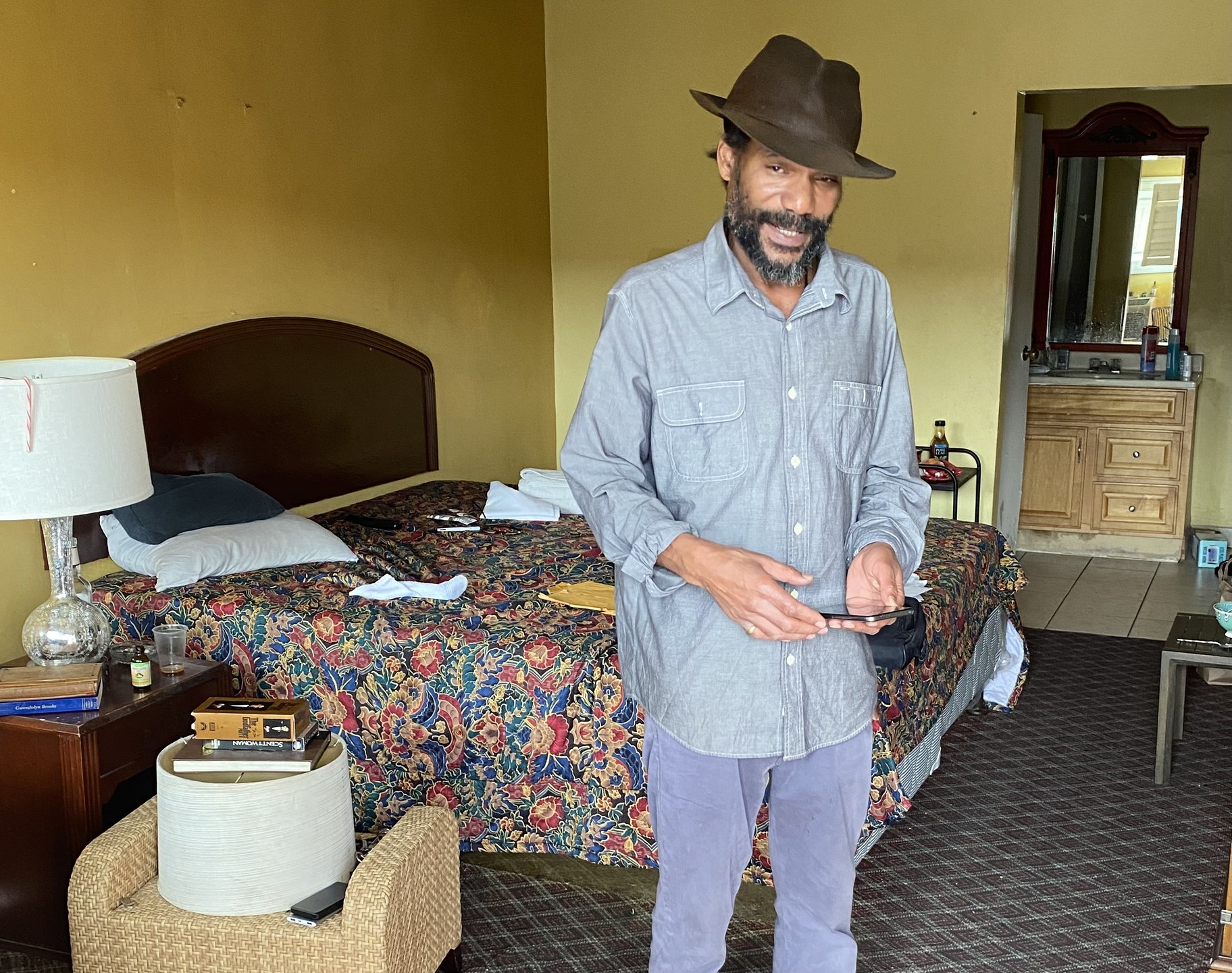 Israel, who doesn’t want to give his last name, has been living at the Los Angeles Inn & Suites for about seven months while he works on securing Section 8 housing. Photo by Zoie Matthew.

And as the “Inside Safe” program scales up, even some participating service providers have questions about where the necessary resources will come from.

“What happens when you don't have any more motel rooms? And if the end game is permanent housing, we all know that there's not enough permanent opportunities for people,” says Tescia Uribe, a chief program officer for People Assisting the Homeless, or PATH, who worked at the Venice site. “This is great for two years. Then are we really going to see a sustaining permanent plan where people end up staying inside?”

Bass says she plans to increase the pace of affordable housing production by cutting down on red tape, using the emergency order on homelessness she declared on her first day in office. In her “Inside Safe” directive, she also says the city will look into “master leasing” both interim and permanent housing options.

While even the mayor has admitted that they are “building the plane while flying it,” she did pause to take a victory lap in Venice as efforts to disband the encampment were wrapping up.

Bass and Councilmember Traci Park attended a celebration at The Venice Rose, a local cafe blocks from where the encampment was cleared. Toting signs of support for the electeds, some local homeowners and business owners said they saw the effort as a success.

Venice resident Donna Adams said the encampment decreased her property value and caused her homeowners association fees to spike. She also feared walking down certain streets. This effort has converted her into a Bass supporter.

“I feel really, really positive about this and I just said to Karen Bass … ‘I didn't vote for you, but I will next time,’” Adams told KCRW. 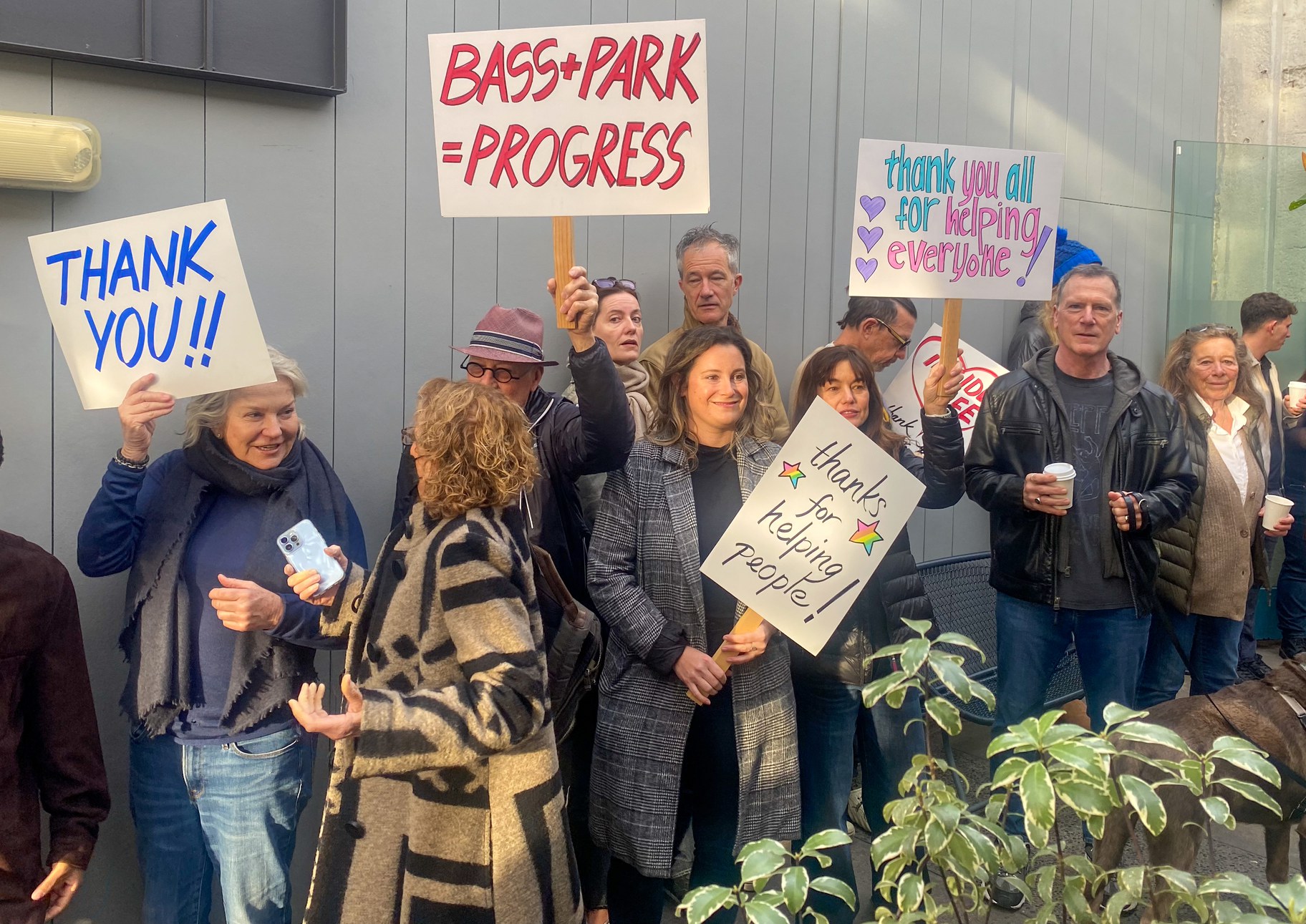 Venice homeowners and business owners threw a celebration for Karen Bass and Traci Park at The Venice Rose restaurant, as efforts to clear a Venice encampment wrapped up nearby. Photo by Zoie Matthew.

Grace Torkelson, who also lives in the neighborhood, says she thinks getting people housed is the “right approach,” and hopes it will have a lasting impact.

“We've had many clean-ups where people come back, and I hope that it's not just moving people, but also situating them in a position to be successful and to stay off of the streets,” says Torkelson.

While addressing the gathering, Bass spoke about the need to “reclaim the streets,” in order to prevent the encampment from returning. She says she believes this can be done using outreach alone, without criminalization and law enforcement.

“What I worry about with arrests is the fact that they'll be in jail for a couple of days, and guess who's coming back?” said Bass. “The point is that we have to solve the problem. Now, let me just acknowledge, too — under any kind of situation if somebody violates the law, they violate the law.”

Meanwhile, Councilmember Park recently introduced a resolution to designate the area near the Bridge Home Shelter off-limits to encampments, under the city’s controversial anti-camping ordinance 41.18. If the motion is passed, it would mean people could get citations for sitting, sleeping, or storing property in the area moving forward.

Mayor Karen Bass’s “Inside Safe” initiative has brought more than 100 unhoused people into shelters. But how fast will permanent housing materialize?

Hollywood diversity backslides in 2022 after some progress

Last year saw a decrease in women and underrepresented people behind the camera in Hollywood — following momentum from 2020’s #MeToo and #OscarsSoWhite.

The record storms that pummeled California were a boon to surfers, who have been riding massive waves that they haven’t seen in years.