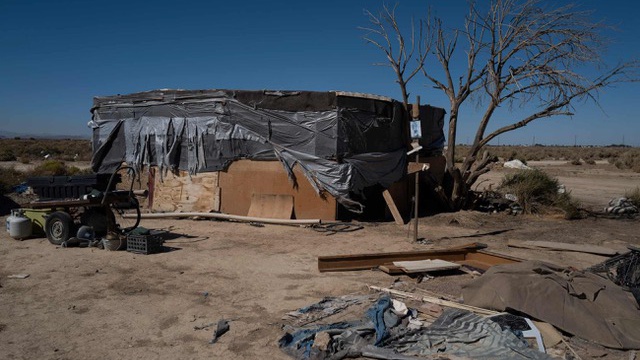 At least 200 people live outside in this remote stretch of the Mojave, where the temperatures can easily top 100F in the summer. Photo by Barbara Davidson/The Guardian.

Hundreds of unhoused Angelenos have taken up residence in the Mojave Desert, north of Lancaster. They’ve parked RVs, pitched tents, built makeshift structures, and are braving the elements without help. Many say they had to move out of town due to constant harassment from Los Angeles Sheriff’s Department deputies.

The Guardian reporter Sam Levin recently visited the community and says the area is remote and desolate.

“It's extremely windy and dusty out there, as you can imagine, like any sort of desert environment is, and so it's just hard to get the most basic necessities, including shade and water,” Levin tells KCRW.

The trek to get water can be arduous, since folks have to travel miles into town. Levin says some go to gas or water stations, where they can fill up large jugs. Some even head out to Kern County for water.

“I've certainly heard stories of people who end up having to walk miles in the heat with no shade on these barely-paved roads, carrying their own water. And so there are people out there who've had near-death experiences of just dehydration combined with heat exhaustion,” he explains.

To prevent people from gathering water without payment, some businesses started to lock up their water spigots.

“It's actually become even harder, from what I gather, for folks to get water. You need to pay for water, and it might not be that much for folks who are housed and have money, but for people who are living day to day on the street, even just getting the cash to pay for water can be a challenge,” Levin says.

Since 2015, Levin says 246 unhoused people have died in and around Lancaster, including 17 in the desert.

So far this year, he notes that 29 people have died. “These are very serious numbers. This is an absolute disaster and humanitarian crisis. And it seems that the problem is getting worse.”

While people ended up in the desert for different reasons, Levin says some had previously camped on the Lancaster streets. “A​ lot of them have dealt with the police crackdown, which involves folks getting tickets for a wide range of things related to the fact that they are unhoused.”

Levin looked into a 2021 ACLU report detailing some of these incidents and adds, “A lot of it is just simple things like someone was sitting on the ground and said that they were trying to get shade and as a result, I decided that that was a violation of the loitering law. And they were asked to move along and given a ticket. And those tickets can come with notices to appear in court, which can then turn into warrants if people don't appear.”

“At one point, he had made a comment suggesting that people should arm themselves in the face of dangers posed by unhoused people, despite there not being a lot of evidence in general of unhoused people causing crime or violence.”

While Paris has publicly said he’s tried to divert people out of the jail system, Levin says many are still being ticketed and are not receiving offers of help or housing when interacting with law enforcement.

Levin says the unhoused community in the area want permanent and stable housing, but many shelter programs didn’t work out or were temporary.

“The people I talked to don't want to be living out there. I think that in some ways, it's preferable to the city in the sense that they deal with police harassment less. They're bothered less by law enforcement. However, the conditions are so brutal that it’s not desirable for any of them to be living out there.”