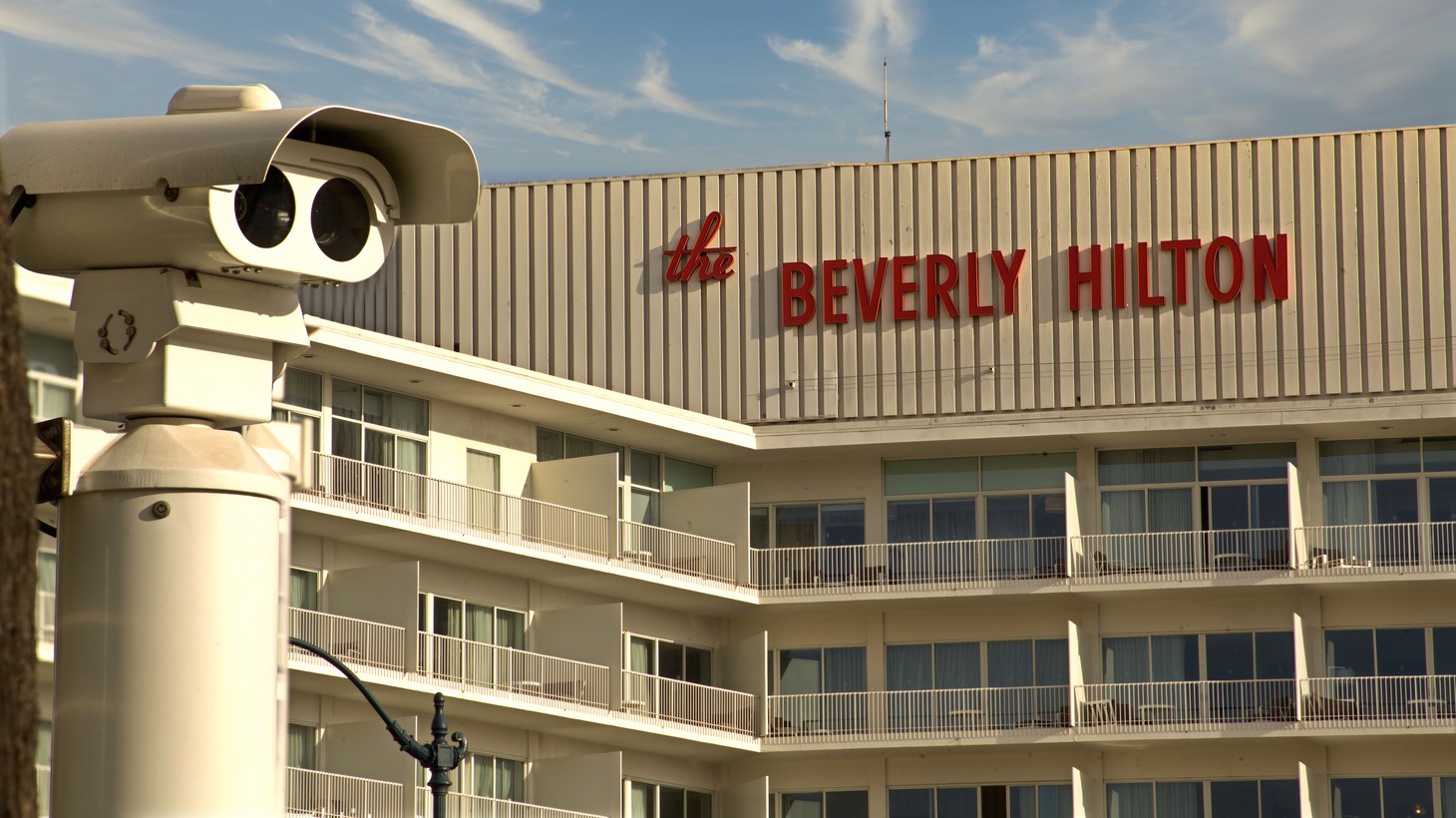 A camera is located next to the Beverly Hilton Hotel in Beverly Hills, California. Photo by Shutterstock.

Drive around Beverly Hills and you’ll find plenty of tourists taking photographs of boutiques and street signs. It may surprise many of those visitors that Beverly Hills is turning cameras on them, too. The city government has been increasing its use of street-level surveillance. It employs more than 2,000 security cameras, plus a seven-day-a-week aerial drone, to monitor people and how they move in and out of the city.

“[The city thinks] having a camera or a drone in a public space is a place where you wouldn't necessarily expect privacy,” says Patrick Sisson, who wrote about Beverly Hills’ surveillance for Bloomberg’s City Lab. “By looking at these different cameras, the drone can patrol and look at public areas…[they’re] almost like beat cops, but in the 21st century.”

By employing this level of surveillance technology, Beverly Hills hopes to reduce crime, such as recent high-profile snatch-and-grab robberies at luxury stores. Mark Stainbrook, Beverly Hills chief of police, points to a drop in property crime of around 15-20%, though he says it’s too soon to tell if the added surveillance is the reason.

“Their argument is these cameras … are just adding more eyes on the street in public spaces. The question is: What happens when you have thousands of those eyes?” says Sisson.

All those eyes get funneled to the city’s Real-Time Watch Center, which opened last June. They’re monitored by police and third-party drone operators, an operation which worries some privacy and civil liberties advocates.

“You … increase the amount of potential interactions [with police] because you have so many more cameras, so many drones, all these other things looking at you,” explains Sisson. “Privacy experts will tell you, we don't want more people having those kinds of interactions based on the suspicions of police officers. Well-meaning as they may be.”

In addition to “well-meaning” police interactions, Beverly Hills’ police department has dealt with accusations of racial profiling. The city was sued for illegally targeting Black people in 2020 and 2021. The plaintiffs claim Black people were disproportionately targeted, and excessive force was used in those interactions. The new technology and increased surveillance concerns activists who believe it will more likely target people of color.

The prospect of monitoring the public in general and stopping someone before they may commit a crime conjures memories of dystopian movies like “Minority Report.” Sisson even noted Stainbrook, the chief of police, used the term “pre-crime” when they spoke, which also appears in the movie.

“In some ways,’ Sisson says, “we haven't fully reckoned with the legal implications of this, and I think that that debate is very much ongoing.”