The Oceano Dunes have been an off-road attraction for more than half a century. While formal use of the dunes as an off-highway vehicle (OHV) playground goes back to the early 1980s, hitting unpaved back roads as a weekend activity took hold in the U.S. after World War II. One off-road group, the Dune Riders, was founded in 1959 and gave tours of the sandy expanse before the area was a park. Photo by Matt Guilhem/KCRW

Three hours north of LA is the only stretch of beach in the Golden State you can drive your car onto. But at Oceano Dunes, off-highway vehicles (OHVs) reign supreme.

The wind is really blowing and the Pacific is in sight as Cesar Meza sits behind the wheel of his black SUV atop one of the countless sandy hills in the Oceano Dunes State Vehicular Recreation Area.

“We’re out here four-wheeling, enjoying the dunes,” he says through a rolled-down window. “Having fun, spending time with the friends, family.”

Along with Meza and his buddies, people are out cruising the dunes on quads, motorcycles, and yes, even aptly named dune buggies.

But the clock is winding down on all this off-road action. After almost 40 years of OHV access, the California Coastal Commission recently decided it was taking too much of a toll on the environment. They said four-wheeling will be reduced to no-wheeling in three years, and that has a lot of people, including Meza, bummed.

“We’re actually pretty sad because it’s something that’s fun,” says Meza, taking in the sandy landscape. “We get along with everybody here. It’s something that distracts you, gets you out of the normal routine.” 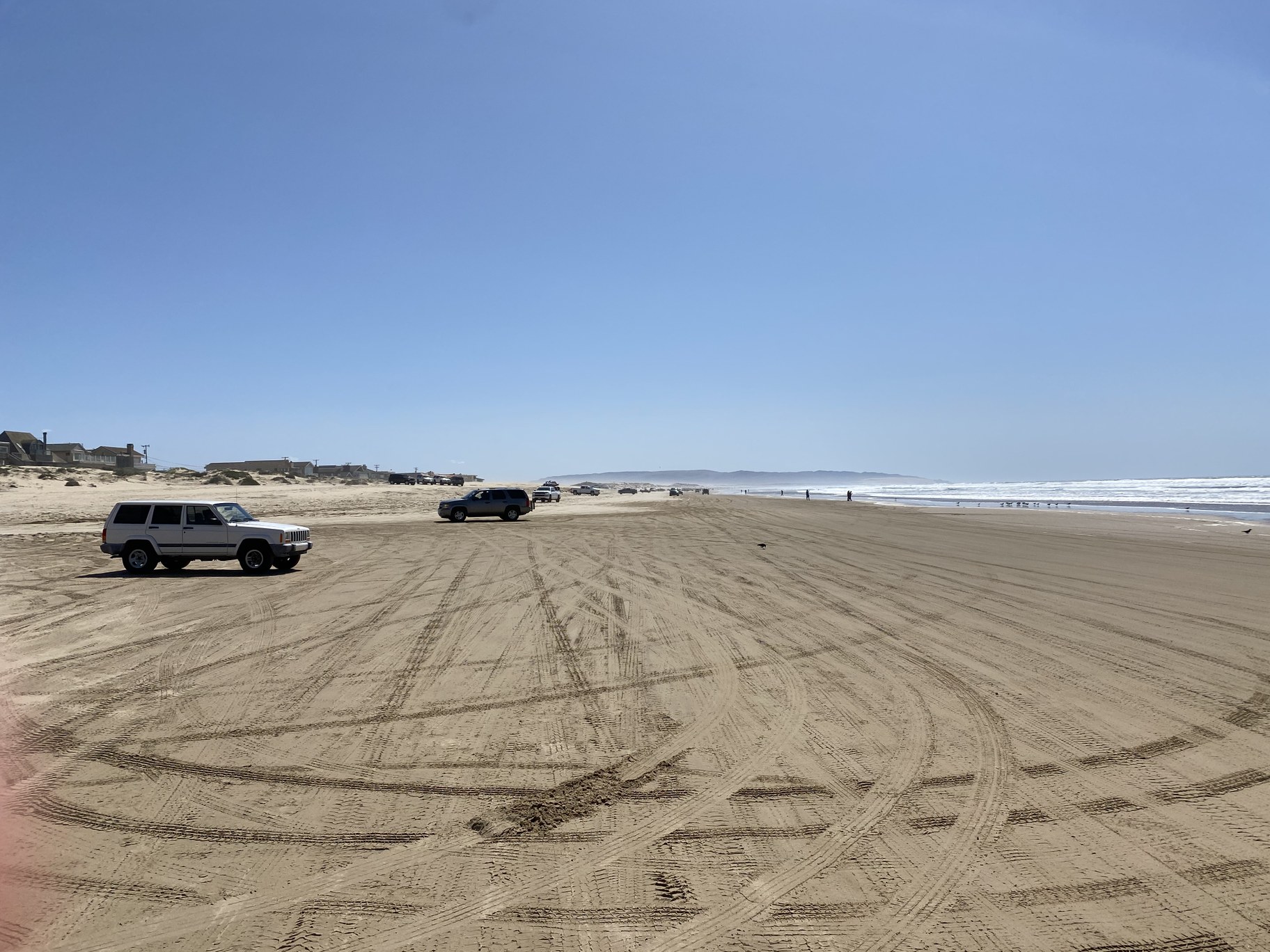 California’s coastline spans 1,100 miles, but only along these few miles at Oceano Dunes can you drive your vehicle right up to the surf. While vehicular access to the edge of the sea is basically non-existent in the Golden State, many beaches on the East Coast allow it. Photo by Matt Guilhem/KCRW

Walking along the beach that leads to the dunes, you see families have parked their trucks and SUVs — some even tempting fate with their cars — on the shore and are having picnics or just goofing around. Some people are walking their dogs, and kite surfers are in the water making a difficult sport look tempting and easy.

And then a mile down, the distinct whine of ATV engines can be heard along with the surf and the wind.

Anthony Chavez is unloading his quad. The 18 year old is here for a couple days of camping and family time. It’s a tradition for them, and he’s just learned of the plan to end off-roading.

“I don’t think they should close it down. I think they should keep it open,” says Chavez as he and his brother prep their gear. “I’ve been coming here since I was 8 and it’d be sad to see this place close down. Have a lot of family, good memories here. It’s beautiful to be able to camp, ride off-road vehicles, and be at the ocean. That’s a perfect combination.”

Thanks to the park’s location along the Central Coast, that “perfect combination” is super popular with families from the Central Valley. More than a third of people coming to this stretch of coastline are from Bakersfield or Fresno. And camping on the beach is just $10 a night. For a lot of Californians, Oceano Dunes is the closest and most affordable place to spend a few days riding and unwinding.

All that recreating has translated into business, and you can find one right on the shore. There’s a store parked on the beach. Out front, big signs advertise “flags and flagpoles” and “helmets and goggles.” And right near the entrance: “Warning! Contents of this trailer are known to be fun and habit forming.” 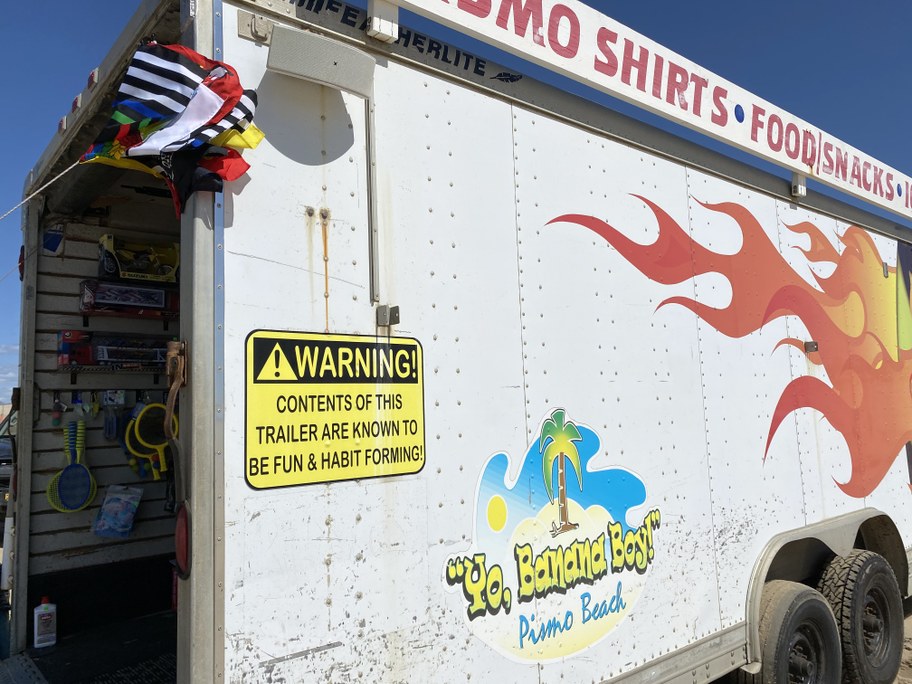 The Banana Cabana beach store sells everything from snacks to sunglasses to glowing accessories for ATVs. But it’s more than this one shop on the sand. The company also has an air-up station to adjust tire pressure on the beach and a seaside water pumping operation that offers fresh water for trailers and campers as well as basic plumbing services. Photo by Matt Guilhem/KCRW

At the back of the shop, behind the register, is Angelica Marcuson. The 24 year old from the nearby town of Grover Beach has been working out here for three years. She says the recent decision by the Coastal Commission to wind down off-roading at the dunes and limit uses of the beach would be a hit to the entire region.

“This is a really small area, so we don’t really have as many jobs available in this small, Five Cities town,” Marcuson says. “A lot of people have to drive farther away, but having the dunes open was allowing a lot more people to find jobs out here, but without that, everyone is just kind of, ‘What do we do now?’”

A very detailed 2017 report commissioned by the State Parks Department found the Oceano Dunes were responsible for an estimated 3,300 jobs and generated hundreds of millions in economic activity.

But it’s built on uncertainty. Off-highway vehicle use at the dunes has never been a guaranteed, permanent thing, says Steve Padilla, the chair of the California Coastal Commission.

“It was a temporary permit and must be periodically reviewed,” says Padilla. “And I know it sounds a little crazy to folks when you say ‘temporary’ and it’s been decades.”

It was 1982 when the “temporary” permit was issued.

Over those decades, the Commission has been in a dance with the State Parks Department about the coastline. The Parks Department has done one study after another looking at how best to preserve the environment while allowing for recreation at Oceano Dunes, and even after nearly 40 years, it’s never quite hit on an ideal solution.

According to Padilla, the decisive study or review always seemed to be just over the horizon.

And so, on March 18, the question finally came to a head. The Coastal Commission held a marathon Zoom meeting. The public comment period spanned hours. Conservationists and some locals cited concerns about dust, vulnerable species like the snowy plover, and noise issues. Off-roaders and other locals said many recreationists are responsible stewards of the beach, environmental impacts are minimal, and riding the dunes is part of family life.

Well after nightfall, the Coastal Commission unanimously voted to end off-highway vehicle use. While Padilla is sympathetic to people who love hitting the dunes in Jeeps, he thinks ending vehicle access is the best plan.

“Almost all of this park is designated as ‘environmentally sensitive habitat,’” says the Coastal Commission chair. “The only uses that are permitted there are what we call ‘coastal dependent uses.’ OHV riding is not coastal dependent. In other words, it doesn’t require being on the coast or near the coast in order to exist.” 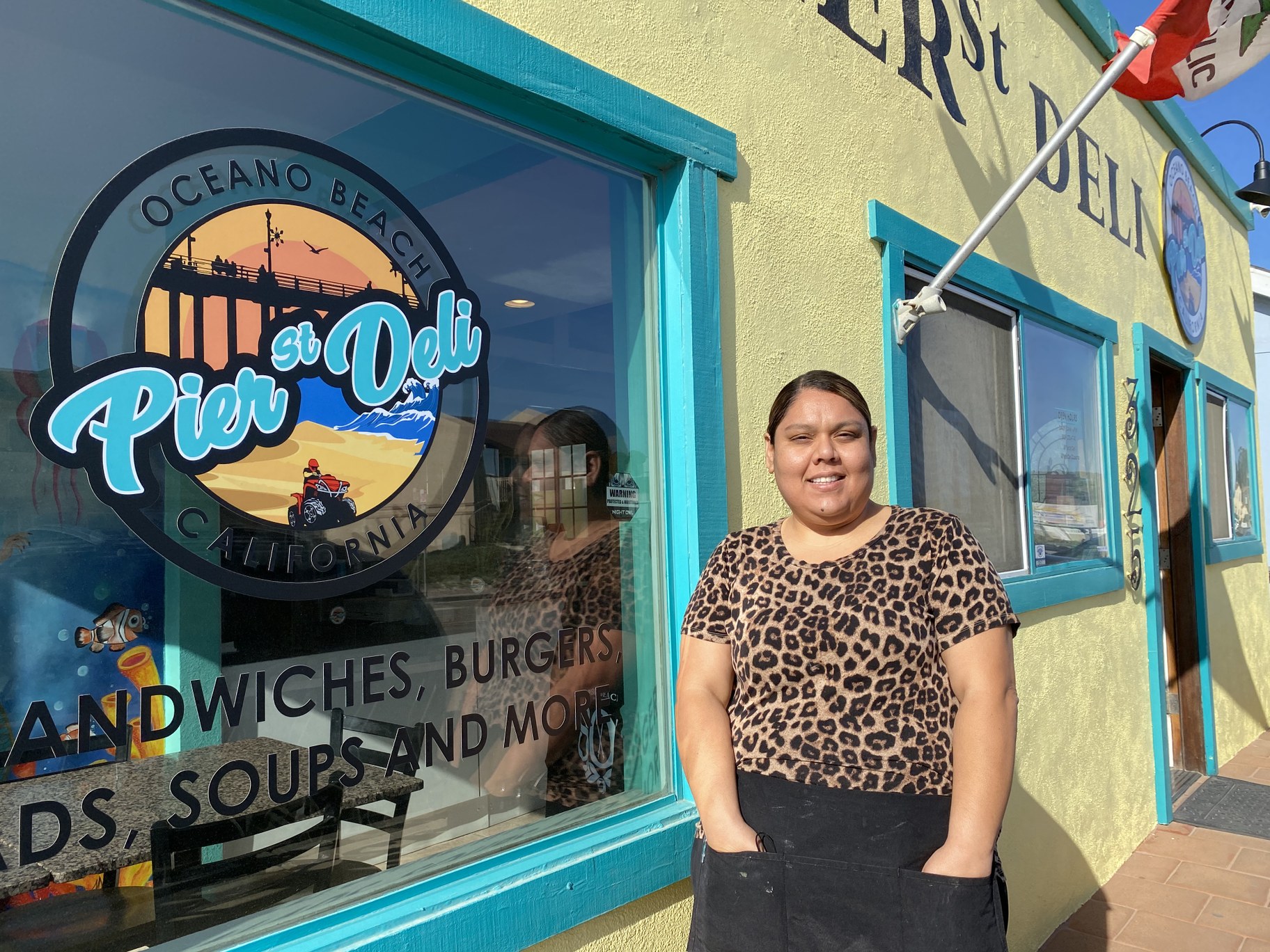 Along with winding down OHV access at the dunes, another part of the Coastal Commission’s decision would close the south entrance to the park on Pier Avenue in Oceano in summer of 2022. Monica Villegas just opened Pier Street Deli with her husband in October. “We put all of our life savings into this. We paid cash,” says Villegas. “We didn’t take in mind the closure of the beach, and that is devastating.” Photo by Matt Guilhem/KCRW

For their part, the California State Parks Department says the environmental impact isn’t that bad, dust output is down by almost 50% over the last decade, and the area is home to some of the most productive snowy plover nests on the West Coast. But now, it’s out of their hands.

Back on the beach, the winds are whipping and the dunes are calling. The pandemic has closed all the ATV rental shops, so getting into the real off-road area takes some ingenuity if you’re quad-less. Fortunately, Kyle Bates is offering a ride in his blue Jeep. It’s got a flag flying from the back reading: “Save our dunes.”

Rolling down the beach  — the speed limit is 15 mph — Bates relays that he’s a member of the Jerk Pirates. They’re not jerks — quite the opposite actually. They’re a bunch of volunteers who keep an eye on the dunes and provide a big service.

“If people get stuck in a vehicle coming out on the beach, we go ahead and we tow them out,” says Bates. “Because if you hire a tow company to come out here and tow you out, it can be anywhere between $100 to $1,000 depending on how stuck you are.”

Bates grew up in the area and has been off-roading here for decades. He’s a big backer of the organization Friends of Oceano Dunes. The group supports what they call “all forms of responsible recreation” and is working on a legal challenge to the Coastal Commission’s shutdown plan. 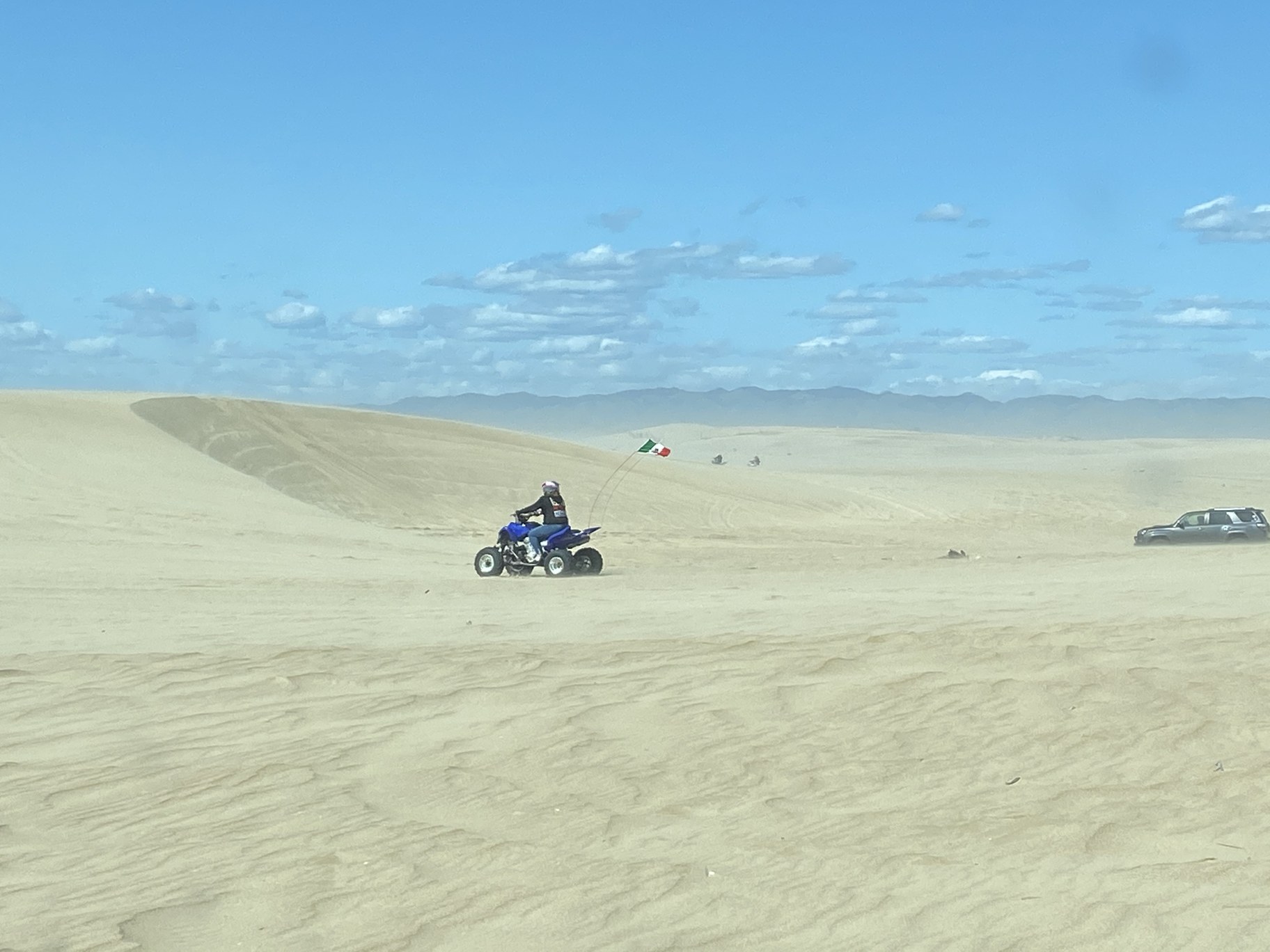 Small quads, dirt bikes, and even luxury SUVs make their way through this seaside Sahara. Throughout the recreation area, dust mitigation tools can be seen, and sizable parts are fenced off to protect threatened species like the snowy plover. Off-roaders are adamant that they can responsibly pursue their pastime without causing significant harm to the unique natural setting. Photo by Matt Guilhem/KCRW

The Jeep has gone a little inland, and is now in a sea of sand. Bates pulls up to the base of a steep dune. His foot slams the gas and in a matter of seconds, he’s crested it. The Grover Beach native says the dunes and the shore were a formative part of his youth — one he wants to share in the future.

It’s a big unknown if he’ll get to do that.

Lawsuits from the group Bates is a part of will contest the ban on off-roading here, and the Coastal Commission and the State Parks Department may find a compromise that still permits some of this activity.

For now, OHV use will continue at Oceano Dunes at least for three more years. But with a looming expiration date, each day of off-roading seems to pass like sands through the hourglass.