Raw sewage from El Segundo’s Hyperion Water Reclamation Plant ended up in the ocean earlier this month. Why it happened is under investigation. “We hope that our city officials will really get down to the bottom of this. … I am a resident and I do want answers,” says Nikia Gonzales. Photo by Shutterstock.

Seventeen million gallons of raw sewage from the Hyperion Water Reclamation Plant ended up in the ocean off El Segundo and Dockweiler Beaches on July 11 and 12. What caused the spill is under investigation. County officials took hours to tell residents about it and close those beaches.

Now the LA Times reports that the delay in public warnings and emergency response resulted from multiple communication failures between LA city and county agencies.

“I want to start by apologizing, both to the board and to the public, for our failures at the Department of Public Health in responding appropriately to this really disastrous incident. There aren’t any excuses, there were multiple failures. Most of them have already been fixed,” said Barbara Ferrer, director of LA County Department of Public Health, at a Board of Supervisors meeting earlier this week.

At the same meeting, LA County Supervisor Janice Hahn said, “Foul odors are being emitted from the Hyperion Plant and are making life for the surrounding neighbors of El Segundo miserable. The smell, many describe, as paint peeling. And they’ve called my office. It's making people sick, terrible headaches, continuous vomiting.”

Nikia Gonzales lives in El Segundo and has been dealing with this aftermath. She tells KCRW that she wants immediate communication from Hyperion and city officials. “We are in the backyard of Hyperion. I feel like El Segundo should have been the first to be notified. I think the chain of events of communication is broken. I should not have to be the leader of communication via Facebook.” 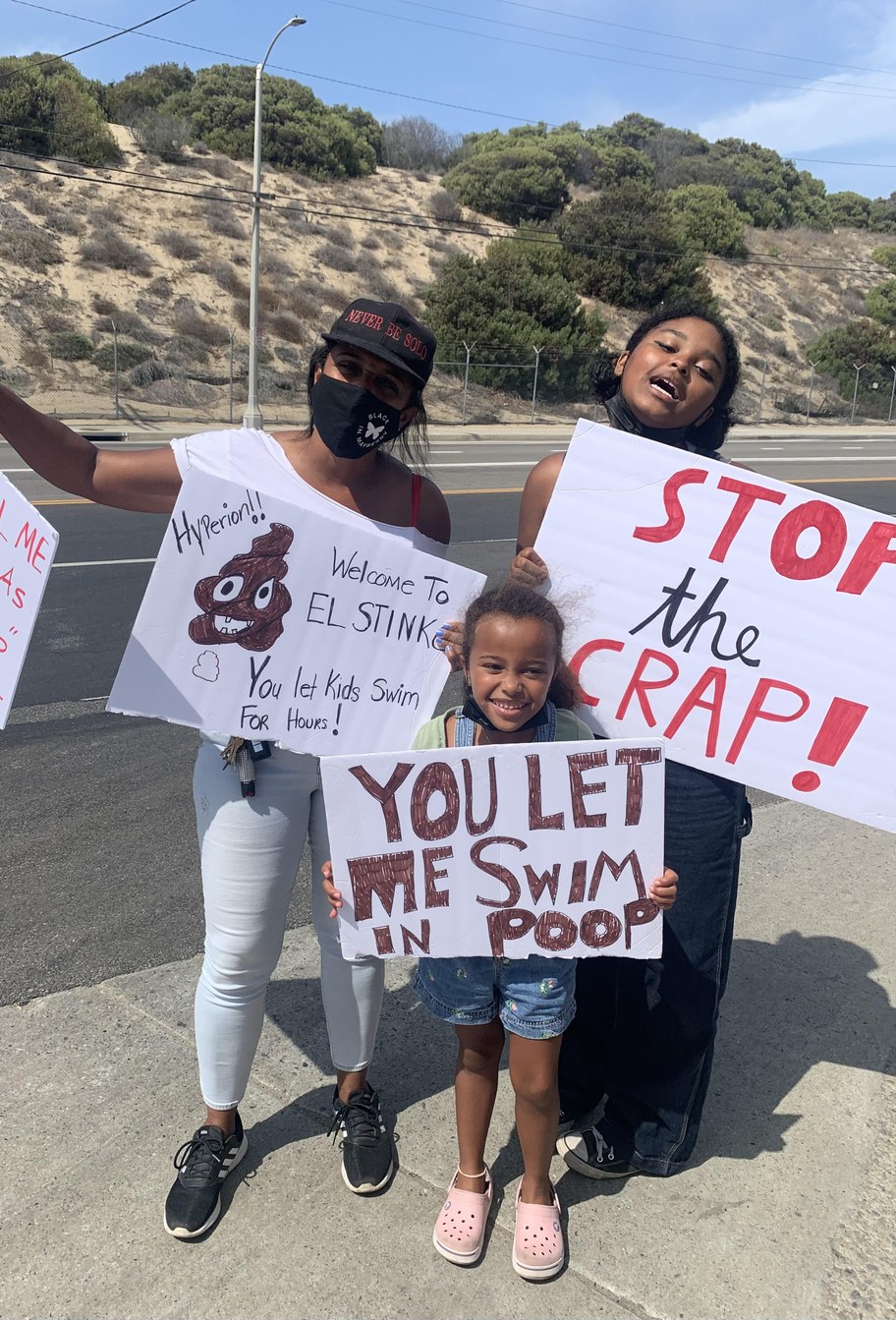 Nikia Gonzales and her kids organized a protest after the sewage spill to demand answers and assistance. Photo courtesy of Nikia Gonzales.

Water quality tests showed that there are no elevated levels of bacteria in the ocean as a result of the sewage spill. However, on Wednesday, LA County cautioned residents to be careful of swimming in ocean waters — but not due to sewage waste. They said rainwater heightened bacteria in the ocean. But that doesn’t ease Gonzales’ concerns.

LA County offered El Segundo residents hotel stays, but they would’ve had to pay out-of-pocket, then get reimbursed by the county. But Gonzales says a lot of her community members cannot afford to put money upfront and wait to be reimbursed.

“We hope that our city officials will really get down to the bottom of this. I’m not the city mayor, I’m not a City Council member, but I am a resident and I do want answers. And I do want them to make sure that emergency steps are taken seriously. We shouldn’t have to wait for a catastrophic incident to happen for us to make a plan. We’re in 2021. I want people to be held accountable, and I want us to be helped.”

Seventeen million gallons of raw sewage from the Hyperion Water Reclamation Plant ended up in the ocean off El Segundo and Dockweiler Beaches on July 11 and 12. What caused...

What to do when parents won’t let their teens get COVID vaccines? VaxTeen offers guidance on consent laws