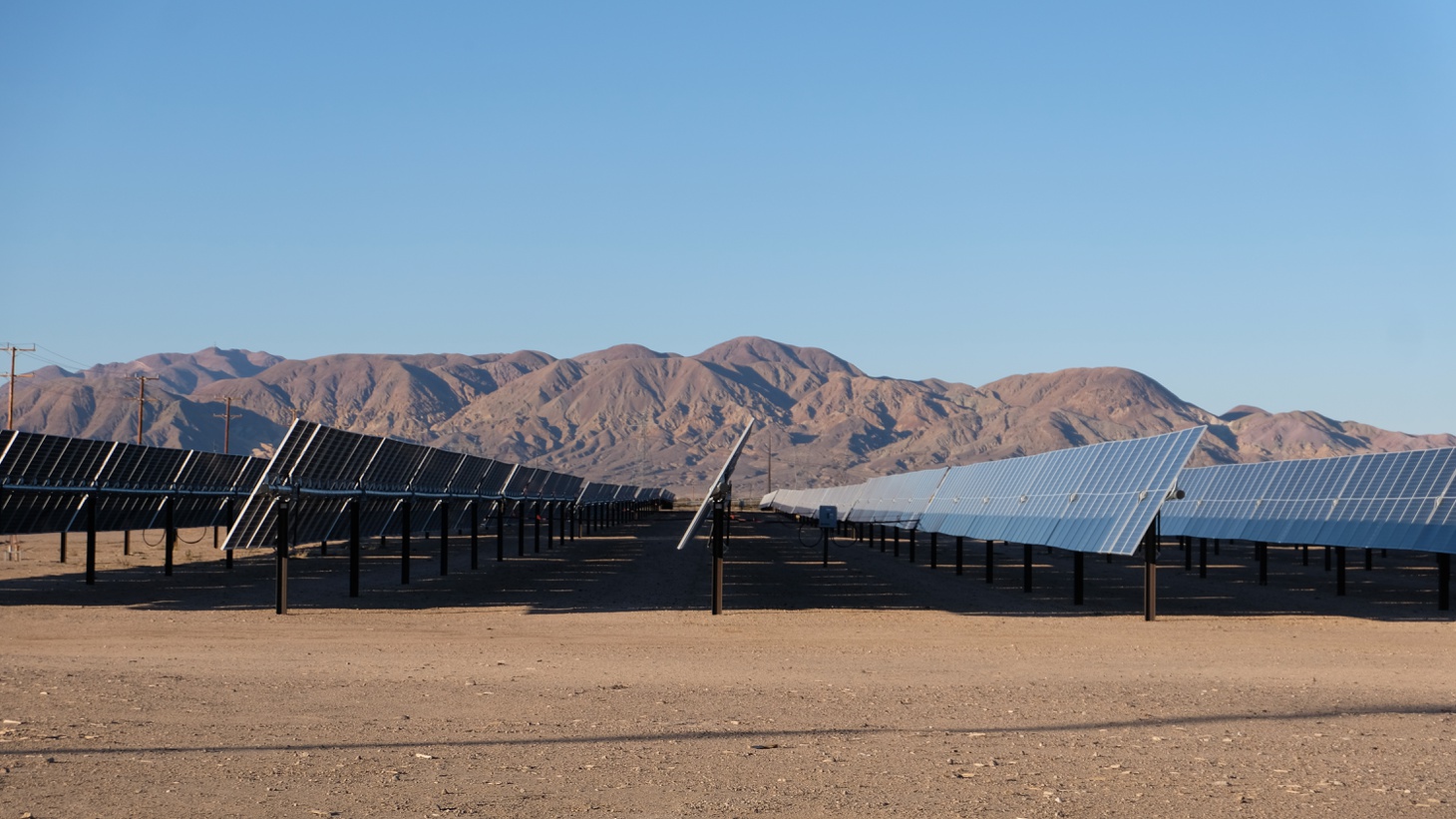 About an hour’s drive east of Palm Springs, on an expanse of desert called Victory Pass, construction workers drive row after row of big metal posts into the desert floor. The posts will soon be topped by thousands of solar panels.

Raisa Lee, a project developer for San Francisco-based Clearway Energy, calls the work “the first step in the erector set of solar.”

Lee says when construction is finished and this facility is connected to California’s energy grid, it will create enough power for more than 130,000 homes. But to generate all that solar power, you need a whole lot of land, about 3,000 acres for just this one project.

“I think until your boots are on the ground, it's hard to digest that scale,” says Lee. 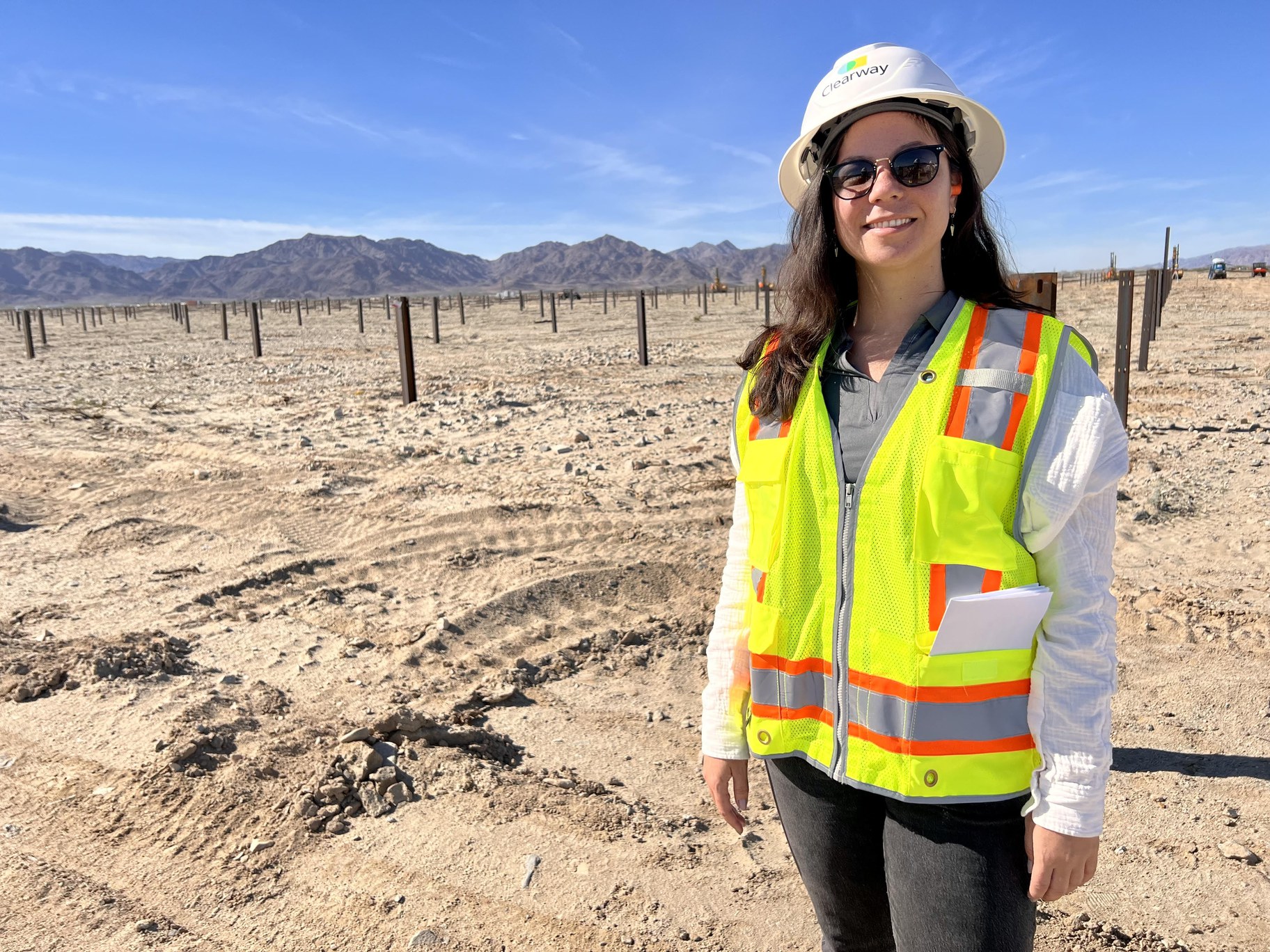 Raisa Lee, a project developer for Clearway Energy, stands at a construction site being prepared for solar power installation in eastern Riverside County. When completed, the 3,000-acre facility will generate enough power for more than 130,000 homes. Photo by Saul Gonzalez.

At 3,000 acres, the Victory Pass solar power facility will be about two-thirds the size of LA’s Griffith Park. And it’s just one example of an accelerating green energy boom in the deserts of California.

It’s a boom encouraged by the Biden administration, which has streamlined renewable energy development within roughly 11 million acres of federal desert land in seven California counties. Along with wind and geothermal, many of those projects are industrial-scale solar facilities, built and operated by companies like Clearway.

“The desert is where the sun is,” says Vice President of Clearway Energy John Woody. Clearway builds its solar projects on both public and private land in California.

Woody showed me around another industrial-scale solar project under construction by his company in the small town of Daggett in San Bernardino County.

When it opens later this year, it will be the largest solar power and battery storage facility in the state. Buyers for the energy were already lined up before construction began.

“We have customers that are buying power from this project all across the state of California,” says Woody.

Beyond profiting Clearway, Woody says these huge desert solar projects are needed if California is going to meet its ambitious green power targets.

“California needs to add about six gigawatts a year of these renewable energy and storage projects to meet their clean energy goals, 90% by 2035 and 100% by 2045,” says Woody. “And so we're just doing our small part to help California meet those goals.”

Woody says opening up more California desert controlled by the federal Bureau of Land Management is also needed because of the enormous acreage required to build industrial-sized solar projects. 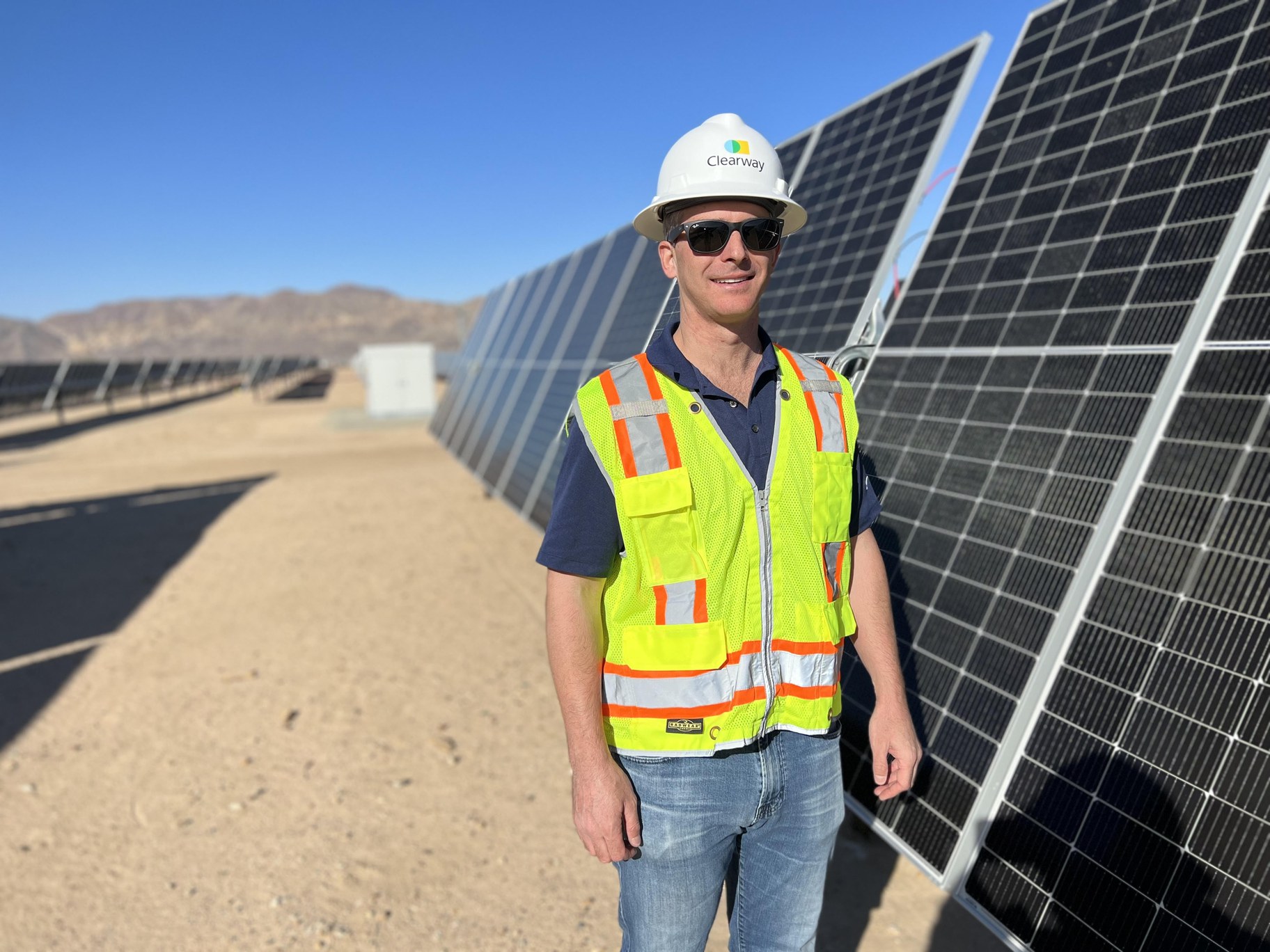 John Woody, vice president of San Francisco-based Clearway Energy, stands next to recently installed solar modules in Daggett. Clearway is one of the biggest developers of renewable energy in California. Photo by Saul Gonzalez.

But as solar projects in the desert multiply and grow, so does criticism.

“I've just always found the desert to be a place of inspiration and renewal, “ says environmentalist and podcaster Chris Clarke. “And it's worth something more than just replacing it with endless square miles of photovoltaic cells.”

Clarke says he supports renewable energy, but like other environmentalists, he worries about desert solar’s impact on the habitat of endangered and threatened plant and animal life, like the desert tortoise. 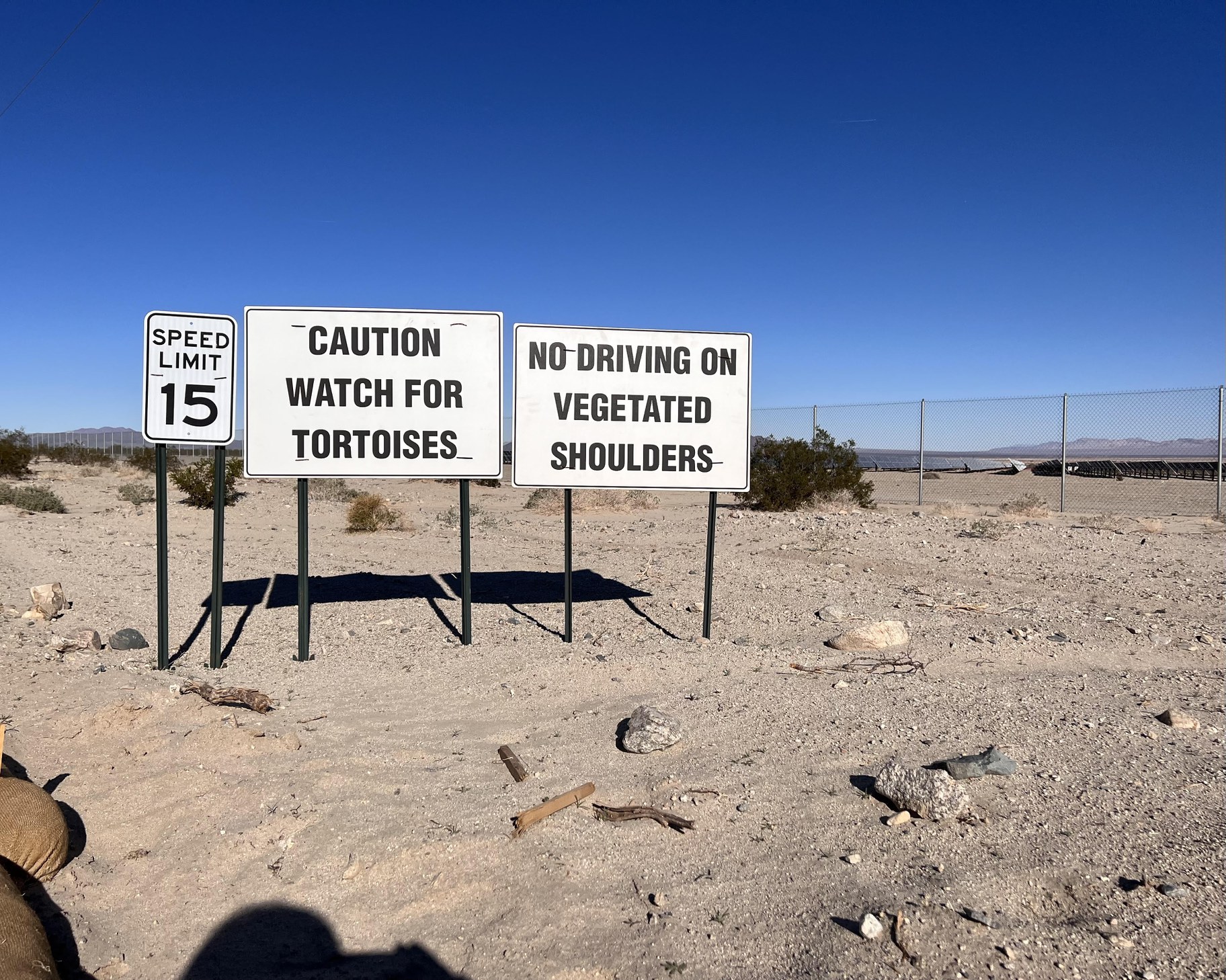 On the road to the solar project site in Victory Pass, signs warn work crews and visitors about the presence of desert wildlife. Photo by Saul Gonzalez.

Clarke compares the current industrial-scale solar boom to the exploitation of land in past centuries, like mining and logging.

“The threat to the desert, right now, is similar to the threats that other places in North America faced in the 19th century, where people were starting to notice what was there and starting to figure out how they could profit off it,” says Clarke. “And what's happening right now in the California desert, with renewed renewable energy development, rivals those changes. It is the kind of landscape level, dramatic change which could be a turning point in California's history.”

Clarke argues that if California wants to go all in on solar, the projects should be built on rooftops in coastal cities and suburbs, where most of the power generated will end up anyway, and not hundreds of miles away in the state’s deserts.

“There are ways to do this without bulldozing old-growth desert with millennia-old plants and endemic populations of rare organisms and endangered and threatened species,” says Clarke. 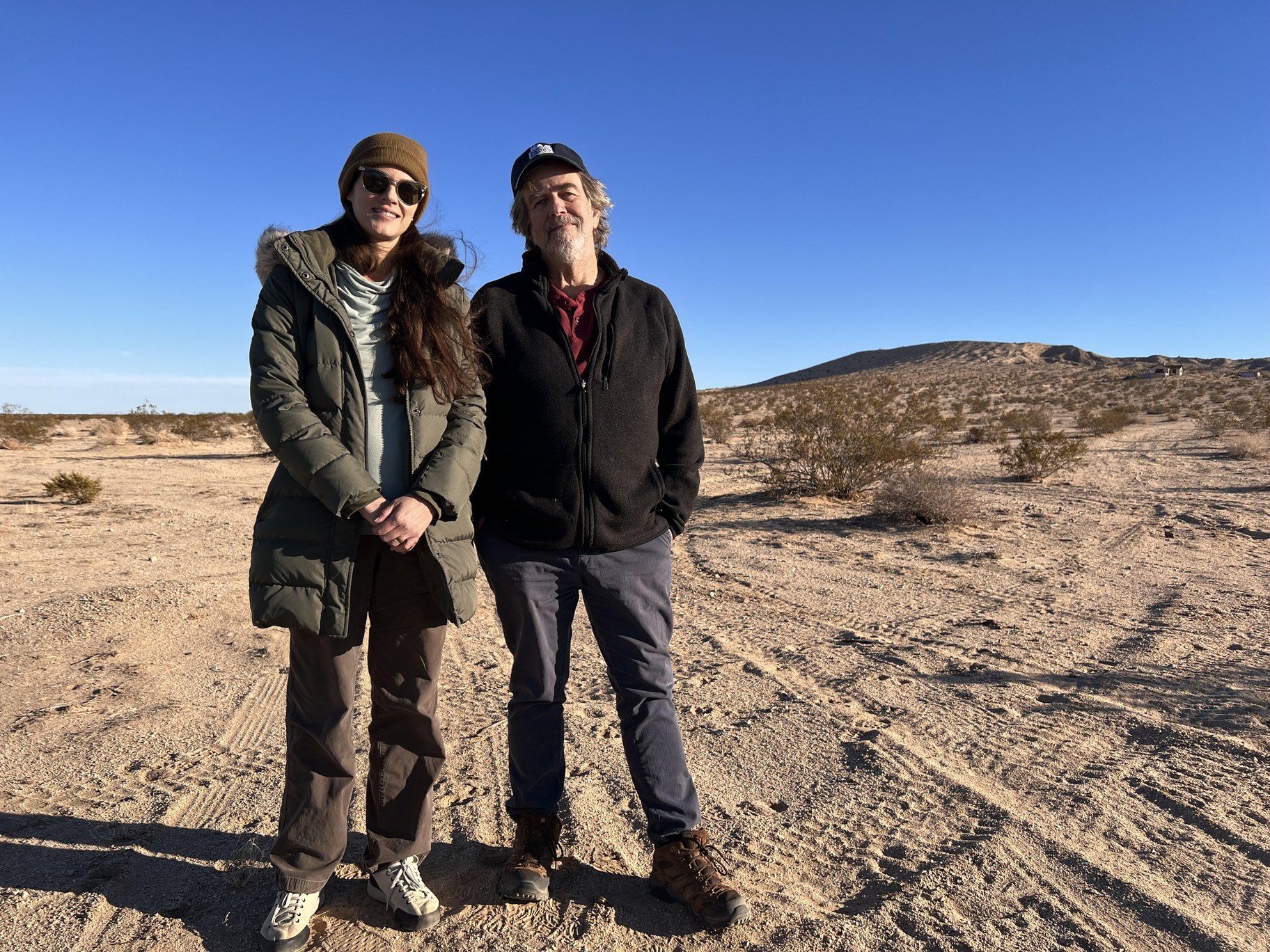 Environmentalists Chris Clarke and Alicia Pike host a desert podcast series where they take a critical look at utility-scale solar projects now under construction and their impact on desert ecosystems. Photo by Saul Gonzalez.

Clearway’s John Woody says enormous efforts are being taken by both private companies and the government at all levels to protect desert wilderness as solar facilities are built.

“You can't do one or the other. You need to do all of the above. It's not a silver bullet, it’s silver buckshot,” says Woody.

At Clearway’s Victory Pass solar site, project manager John Moon points to distant places in the landscape, where other solar projects are either already operating or under construction.

Moon says workers building these facilities are “saving the planet one solar panel at a time.”

But as ground is broken on more solar projects, the debate will continue over how to continue the green energy revolution while protecting California’s fragile desert lands. 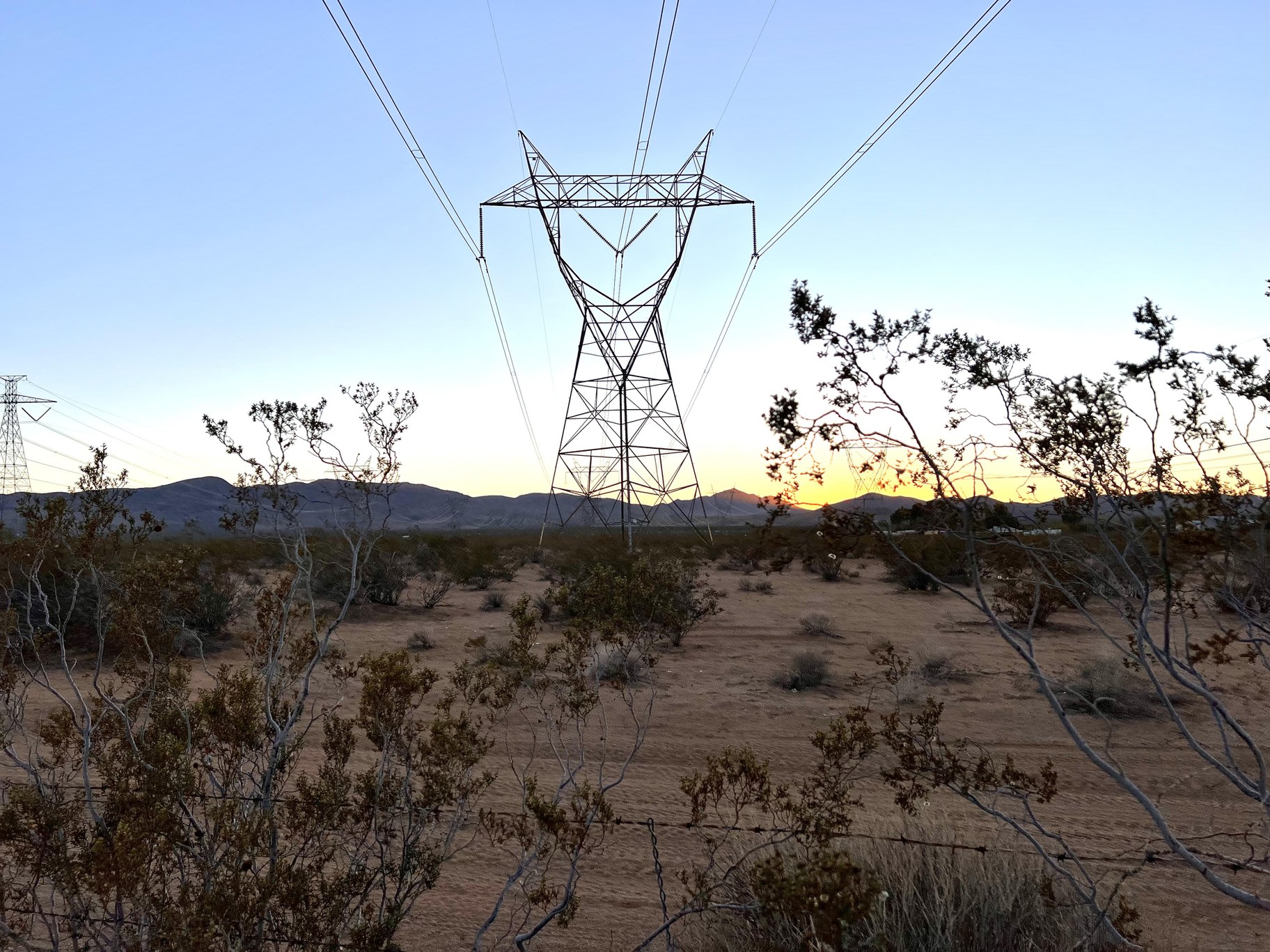 After years of advocacy from the community and professors, East LA College is introducing a new degree in 2023: Central American Studies.

Pasadena Playhouse’s 2023 season celebrates the late Stephen Sondheim, and its first show is “Into the Woods.”