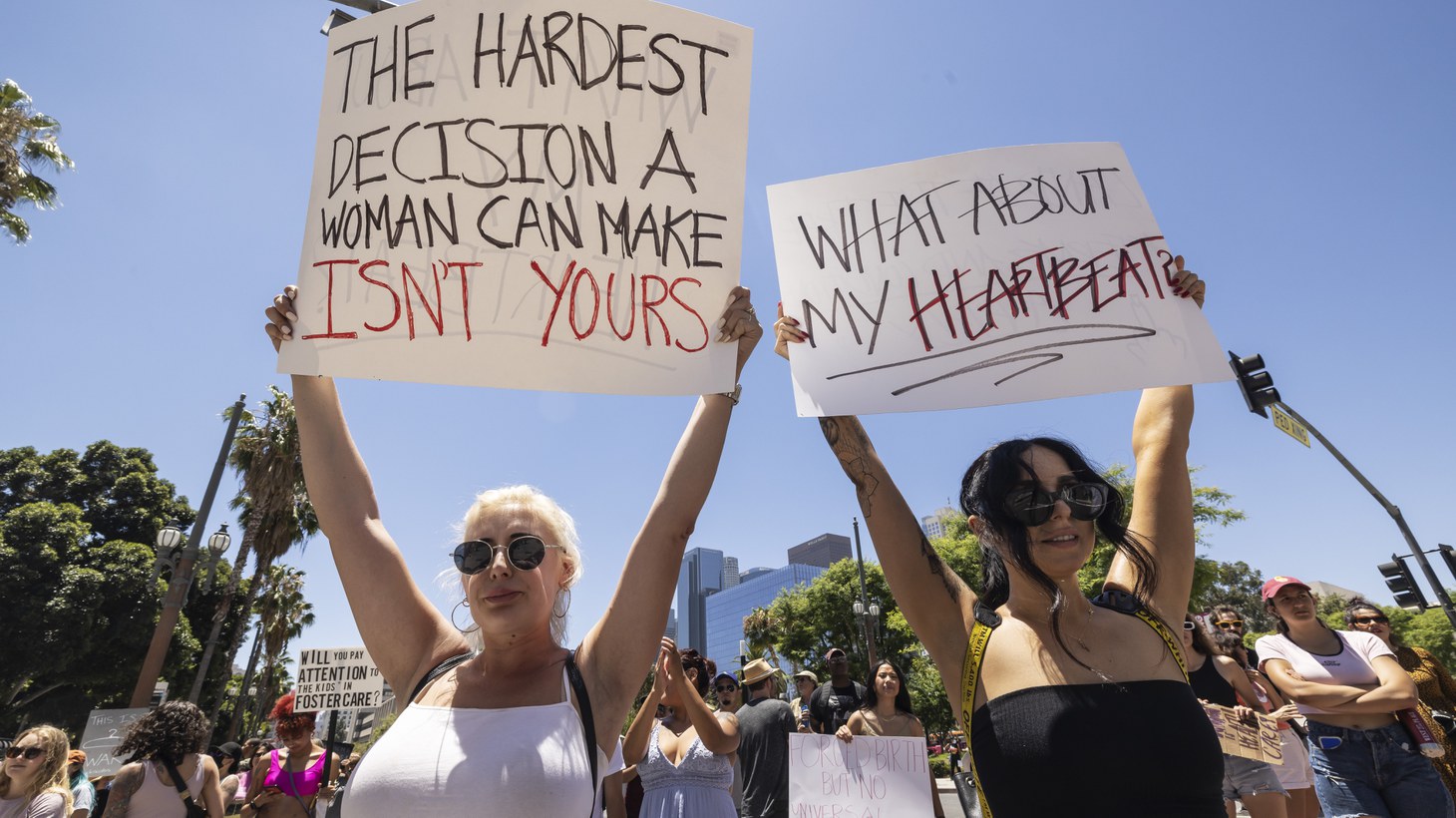 Activists in Los Angeles hold signs that say, “The hardest decision a woman can make isn’t yours” and “What about my heartbeat?” Photo taken June 25, 2022. Photo by Ted Soqui/SIPA USA.

KCRW asked listeners for personal thoughts on the Supreme Court's decision to overturn Roe v. Wade. Here are some of their responses received via voicemail (edited for length and clarity).

Lee Lucas: I cannot believe in America in 2022 that we are going to force women to carry children. Even in cases of rape or incest. I feel like the easiest way to stop unwanted pregnancy is to give every male … a vasectomy at 13, and reverse it upon marriage. Why are we forcing women to carry children for nine months? When we don't even have a Family Leave Act? These Republicans won't even vote for free school lunches.

Kristen (last name not provided): The first thought that came to my mind was anger and shock and disbelief. More for the states that aren't as liberal as California and for the women and girls that are not going to be protected from rape and incest, and they're going to be forced to carry out these traumatic births. I also believe that it’s women's fundamental right to choose. And they just took that away from us, in order to control our medical decisions that are very personal to us. It affects me because I have a daughter who is 18. And if she got in a situation, or something happened, I want her to have that right to choose. I know we live in California, which is really liberal, but I don't take that for granted.

Anonymous: This decision will impact the underserved communities around this country — women that don't have resources, women of color. This will not affect rich white women at all. They can fly wherever, whenever and get an abortion if they want. And the fact that the Supreme Court has made this decision along with the gun decision shows the lack of understanding, the lack of a willingness to see what the real problems are in this country. It's not women.

LA has been preparing for more traveling patients seeking abortions. Meanwhile, anti-abortion advocates plan to now focus on states like California where the procedure...

KCRW asked listeners for personal thoughts on the Supreme Court's decision to overturn Roe v. Wade. Here are some of their responses.

Los Angeles Times columnist Gustavo Arellano describes how his experience in Catholic school made him a pro-choice advocate.