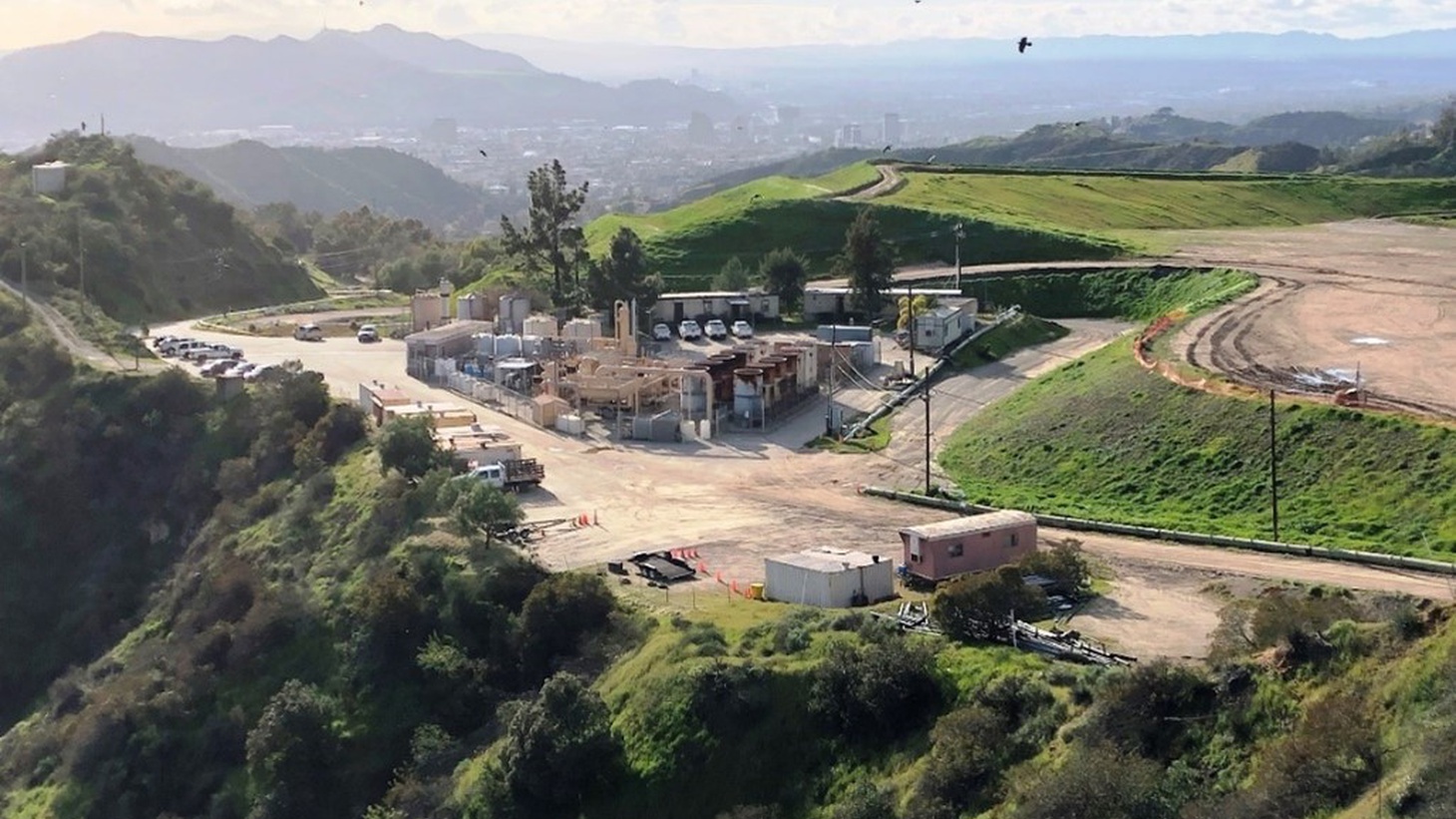 The Scholl Canyon Landfill in Glendale is scheduled to close within five years. Photo courtesy of Glendale Water and Power.

When Marie Freeman moved to Glendale in the late 1990s, she called her new neighborhood “bucolic.” Sure, there was a visible dump up the hill, and the trucks shipping garbage up there were noisy, but she believed it would soon become a recreational space.

“We were told that there was a landfill up there, but part of it was closed, and the other would be closed in a couple of years, so not to worry,” she says.

That was 32 years ago, and the dump is still there. On neighborhood strolls, Freeman has seen the dirt-covered garbage pile get taller over the years. “It's very, very visible,” she says. “The pipes are visible. Equipment is sometimes visible. So it's a presence.”

Now the landfill is scheduled to close in three or four years. But instead of recreational space, the city of Glendale approved plans to build a power plant that turns the toxic gasses coming from all that decaying garbage into electricity.

“That idea is not a bad idea for the right place,” says Freeman. “That's good on the outskirts of town. But square in the middle of an urban area like this makes no sense to me at all.”

Now Freeman and some of her neighbors have sued the city to try and stop the plant from getting built. They’ve pooled together their money in a GoFundMe to pay for their ongoing legal fees.

The idea of converting gas from organic matter into power isn’t new. The first plants date back to the late 19th century. But its popularity has spiked in recent years as an environmentally friendly alternative to fossil fuels.

Here’s how it works. Once a landfill is full and sealed, all the garbage underneath continues to produce methane for decades. Right now, Glendale Water and Power (GWP) flares it, meaning they set it on fire to convert it into a significantly less potent greenhouse gas. But the Glendale power company estimates a plant could turn that methane into enough electricity to power the plant itself plus 4,000 homes.

It is an especially popular idea right now, since the U.S. joined a global pledge last year to curb its methane emissions by 30% by 2030.

“In the next decade, scientists forecast that methane is going to cause more warming than carbon dioxide. All of the fossil fuel burning around the globe is not going to do as much damage to the climate as methane emissions, because methane is just so much more powerful in the short term,” says Julia Levin with the Bioenergy Association of California.

California has set a goal to cut methane emissions by 40% by 2030. And since 20% of our methane emissions come from landfills, cities like Glendale have decided that’s a pretty good place to start. It might not be as clean as wind or solar energy, but it’s much more reliable.

“Solar [and] wind aren't there all the time. … Batteries are never going to be enough to get us through six weeks of terrible wildfire smoke like we experienced the summer before last,” Levin says. “This is not a close call. We should be using every molecule of biogas we can because it means it's one fewer molecule of fossil fuels” releasing greenhouse gasses.

Marie Freeman, who lives near the future power plant, agrees capturing biogas from landfills is not a bad idea. But residents and the city don’t agree on where to capture it.

“It's actually a fairly interesting, good idea. But where is it, and what does using that methane to produce energy really mean in terms of impact on the environment in that place? Is this the right place for it?” says Freeman. 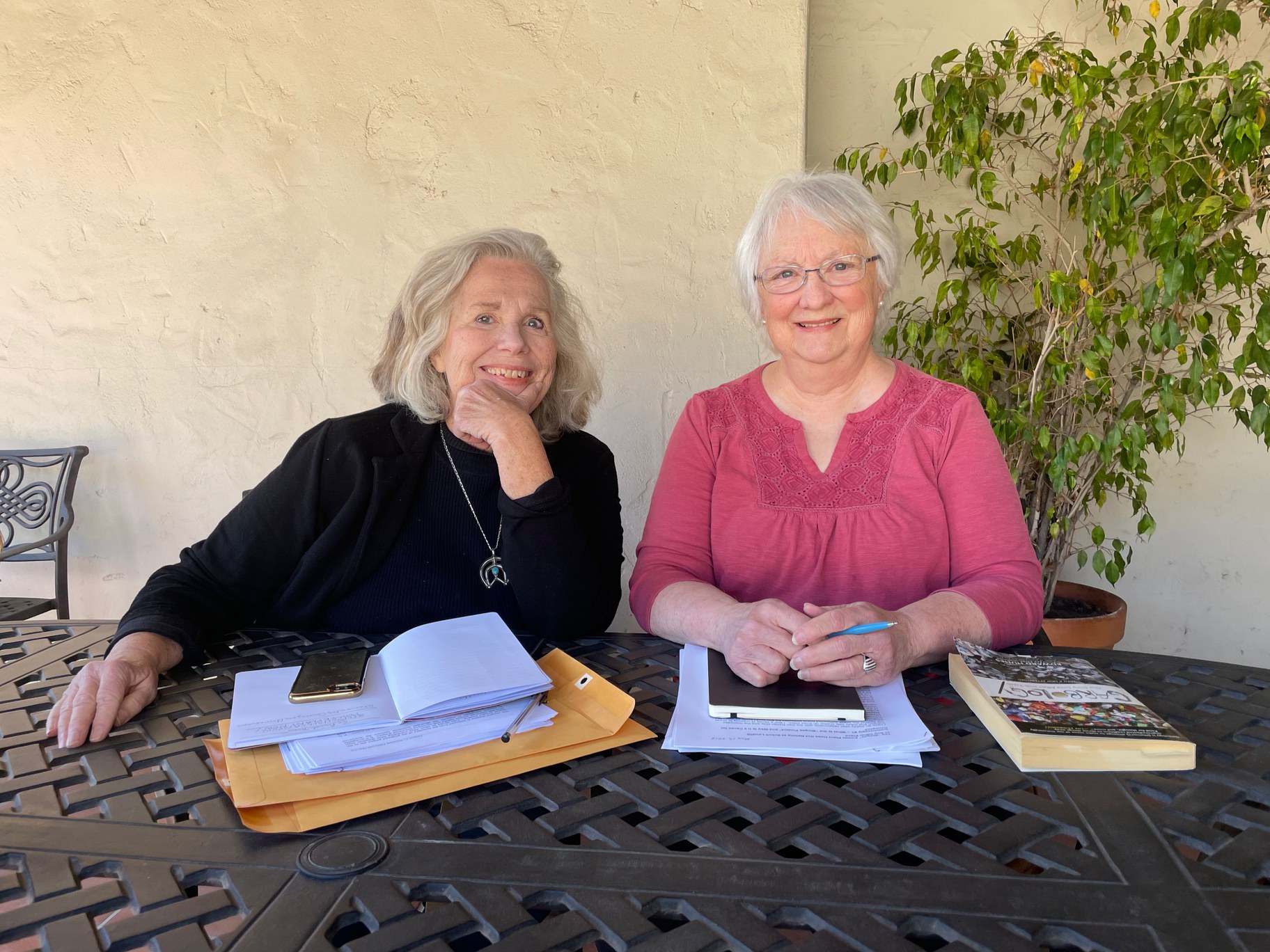 Marla Nelson (left) and Marie Freeman (right) have helped in the lawsuit against Glendale Water and Power. They can see the landfill from their neighborhood. Photo by Caleigh Wells.

Right now, that landfill isn’t zoned for a power plant. That would have to change, and residents are worried that could lead to building more industrial projects in their proverbial backyard.

And then there’s the matter of putting a power plant in a high fire risk area. “The fact that it's located on top of an earthquake fault in the middle of an urban center, with all this dry brush around it with one way in and out, worries us quite a bit,” says Freeman.

The other problem? The plant will be useful for probably about 20 years. Then it could become obsolete because there won’t be any more methane to burn.

Residents like Freeman have laid out all these issues in a California Environmental Quality Act (CEQA) lawsuit they’ve brought in LA Superior Court against their power company, Glendale Water and Power. Some residents want the city to reopen a pipeline that used to ship methane from the landfill to a natural gas plant across town. But that doesn’t help Glendale meet its green energy goals. Freeman and GWP officials couldn’t comment on that though, since it’s all part of that pending litigation. So far, the court has not set a date for a hearing.

Turn trash into electricity in Glendale? Some residents worry about safety

Glendale wants to turn emissions from its landfill into electricity. Residents living nearby say the plant is a hazard in their backyard.

The crypto social club, Friends With Benefits, offers members investment opportunities and a social network. How exclusive is it?

In La Puente, the restaurant Campo é Carbón is set up in the home backyard of Adriana Alvarez and chef Ulysses Gálvez.