This evening, seven Democratic presidential candidates are taking the stage at Loyola Marymount University for the sixth primary debate. But for a while, it looked like the debate wasn’t going to happen. The qualifying candidates all threatened to withdraw because of a labor dispute at the university.

Democratic National Committee Chairman Tom Perez helped broker a deal this week to get the debate back on track. He tells Press Play, “Very simply, everybody involved had the will to get the yes. And we forged a win-win solution. A win for workers: They're getting better wages, access to health care. And a win for employers because when you're paying your workers more, you retain your workers for a longer period of time.”

Protecting Democrats who voted for impeachment

The debate comes after a historic day in Washington D.C., when the House of Representatives voted to impeach President Trump. Some districts around the country went for Trump in 2016 but elected a Democratic representative -- who presumably is risking their political future by voting for impeachment. So how will the DNC protect lawmakers in those vulnerable districts?

Perez responds that those Congress members, especially the first termers, showed incredible courage. “They said it's not about politics and polling, it's about principle. And the principle is no person is above the law, including the president of the United States. And I applaud that.”

The DNC is investing money in vulnerable districts to “build the necessary infrastructure,” Perez explains. “Wisconsin, and Michigan and Pennsylvania -- we've been investing for some time. And not just in those three states. We increased our support for all the state parties by a third right after I got here. And we've invested literally millions of additional dollars to build that infrastructure.” 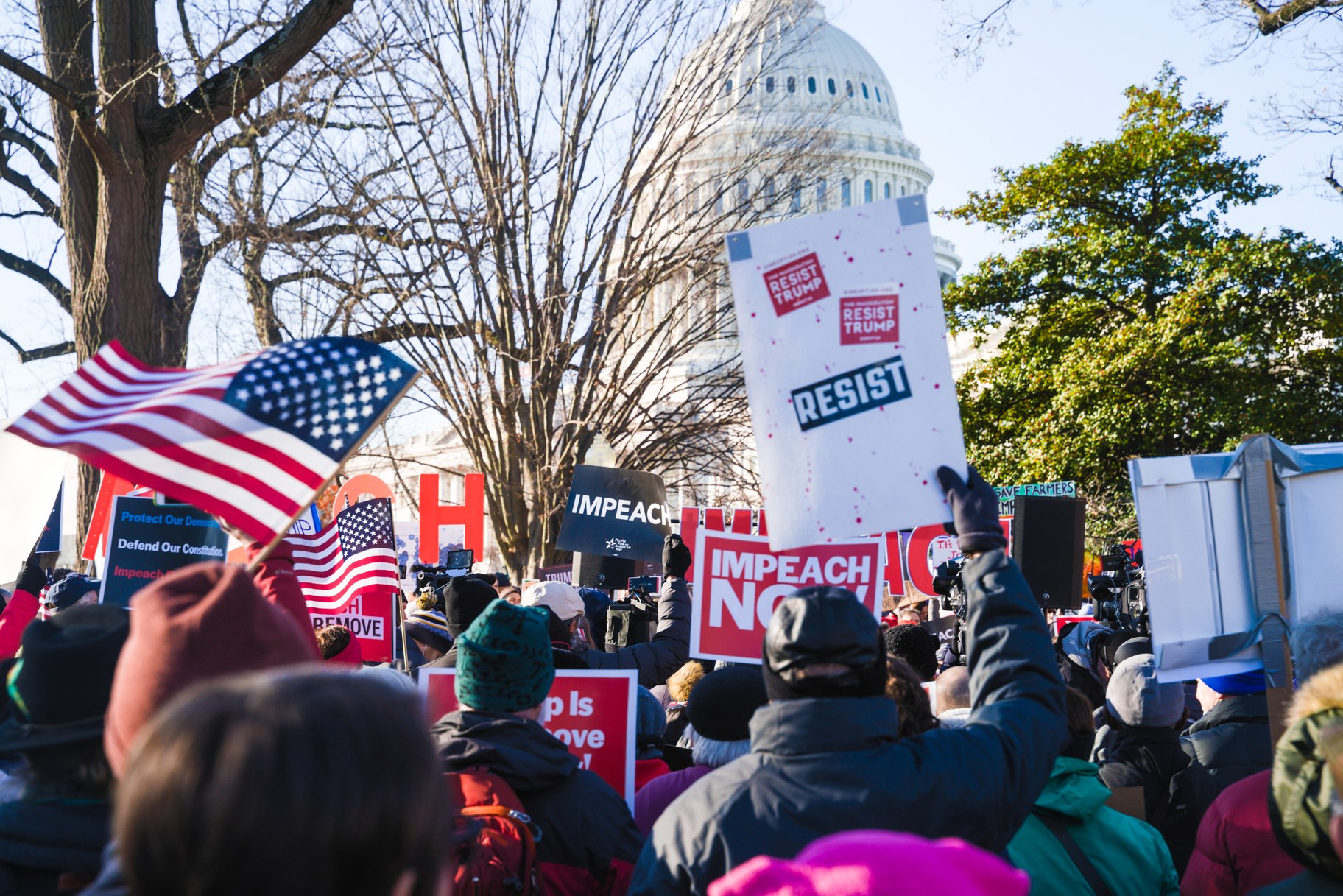 Impeachment rally in front of the U.S. Capitol in Washington D.C., December 18, 2019. Photo by Jackson Fox-Bland.

Entrepreneur Andrew Yang is the only person of color who qualified for tonight’s Democratic debate at Loyola Marymount University. Some critics, including New Jersey Senator Cory Booker, have said that the process is unfair to candidates of color.

Perez points out that Kamala Harris, who’s black and Indian, qualified for the debate, but dropped out of the race recently.

“I'm a big fan of both Senator Harris, Senator Booker, all the candidates. I've had a great privilege of working with all of them,” says Perez. “And when we began 2019, we set forth -- in a very clear fashion -- a series of transparent rules about how you get on the debate stage. And we did things that are different and I think better than ever before. We created not only a polling threshold for the first two debates. But we created a grassroots fundraising threshold because we wanted to return power to the people. We started out with a 1% threshold. We moved to 2%. We then moved to 3%. And now in December, we're at 4%. Nobody who has been under 4% in December before the first caucus or primary has ever won the nomination.”

But is Perez saying that the criticisms are invalid? The argument is that if a candidate has money (e.g., Tom Steyer), he can flood Facebook with ads and get those donations. “Well, I don't think the DNC can create a rule that says a billionaire can't run for president. That will be up to the voters,” responds Perez.

The Senate impeachment trial is in January, and several presidential candidates are senators who must be at the trial, meaning they won’t be campaigning in places like Iowa. Will that be a problem for them?

“We're obviously monitoring that situation very closely,” Perez responds. “And we're in close contact not only with [House] Speaker [Nancy] Pelosi's office, but [Senate Minority] Leader [Chuck] Schumer's office. And we want a fair trial. ... And what we're going to do in January is obviously work our best to help senators who have to be there to be able to do their best.”

He adds, “I think the American people understand the solemn responsibilities that senators have, and they're not going to penalize them for missing a day in Iowa, New Hampshire, South Carolina because they're carrying out their Constitutional oath.”