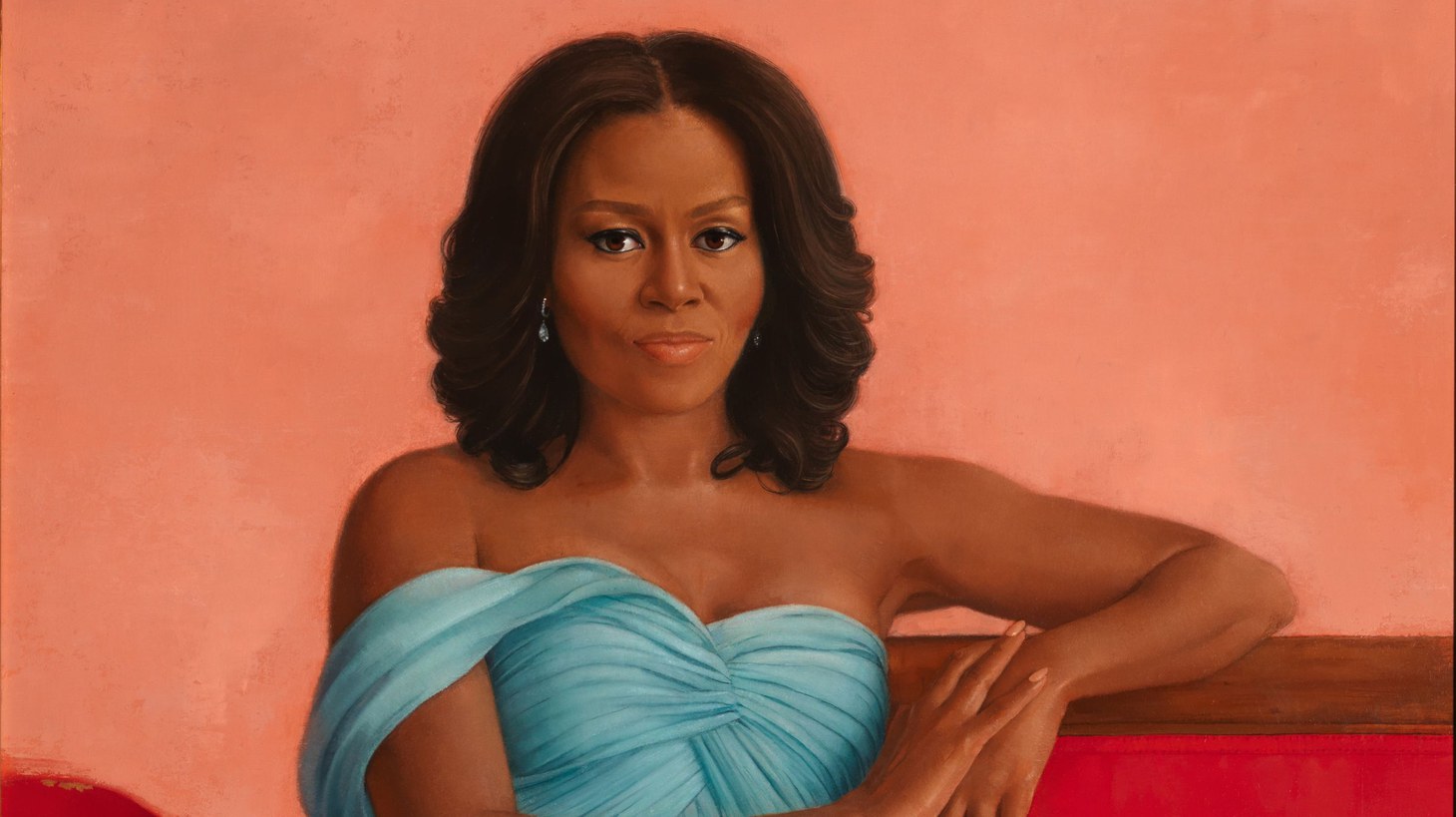 “She trusted what I did and left me alone to do it. And she gave me — I felt — was free rein,” painter Sharon Sprung says of Michelle Obama. Photo courtesy of White House Historical Association/White House Collection.

The official portraits of Barack Obama and Michelle Obama returned to the White House for their unveiling on Wednesday. Robert McCurdy painted the former president, while Sharon Sprung painted the former first lady. Sprung, a New Yorker, is primarily known for other portraits of American politicians, including Jeannette Rankin, the first woman elected to Congress, and Patsy Mink, the first woman of color elected to Congress. She’s also an instructor at the Art Students League of New York.

This unveiling was delayed for five years since former President Donald Trump didn’t want it in the White House, and the COVID pandemic put everything on hold. Sprung tells Press Play that the painting was likely in storage in Washington D.C. for most of that time, and she was startled when seeing it again because she remembered it differently.

“I remember everything a little lighter. … There’s glare, so you’re looking at it not under great lighting situations. So of course, it's going to be different. I'm used to seeing my work in a gallery, where the lights are just right, everything is perfect. So it makes a difference to me. I don't know if anybody else would notice it, but it was noticeable to me,” she explains.

During the unveiling ceremony on Wednesday, Michelle Obama said to Sprung, “It was wonderful to work with you. You are a true spirit. That's one of the reasons why we connected. Your work is phenomenal. But it was your essence, your soul, the way you saw me, the way we interacted.”

The artist says she cried during that moment. “That really meant so much to me because it's somebody that I respect so much. And the fact that she could say this after the portrait is done, I mean, that was incredibly meaningful to me.”

Inside the White House with Michelle Obama

Sprung says you’re never alone with Michelle Obama. Secret Service agents were around, plus stylists who do hair and makeup, and even friends.

“Everybody that does some job there, they're always there. … You're not allowed to move furniture. I mean, there are much different restrictions than when you work with someone in your own home or in their own home and take pictures. … I had to get permission to move the couch in the red room into the blue room. And I just started to pick it up and move it like I would do in my studio.”

Sprung asked Obama if she had thoughts on the portrait, and she responded no. “She trusted what I did and left me alone to do it. And she gave me — I felt — was free rein.”

Because people aren’t allowed to bring oil paint into the White House, Sprung says she took photographs of Obama, which she later plastered all over her studio, and compared her skin tones to color studies. She also referenced YouTube videos and articles. It was all to get a sense of who Obama was.

“And you just pray that you connected with that person,” she adds.

Sprung explains that each day she went into her studio, she said “hello Michelle” and then “good night Michelle.”

“Sometimes we have a little feuding going on in the studio. And sometimes her lip would go in the wrong way. And I would just go, ‘No, no, we're not doing this.’ So it's just listening to the painting.”

She also tried to understand Obama by going to her childhood.

“First I saw this beautiful picture, this smiling young girl. I think she must have been maybe 4 or 6. And she's just there in the world, happy. And then I saw one of her dancing ballet. … She was so determined in her face, and she had such grace and beauty that … translated into the painting.”