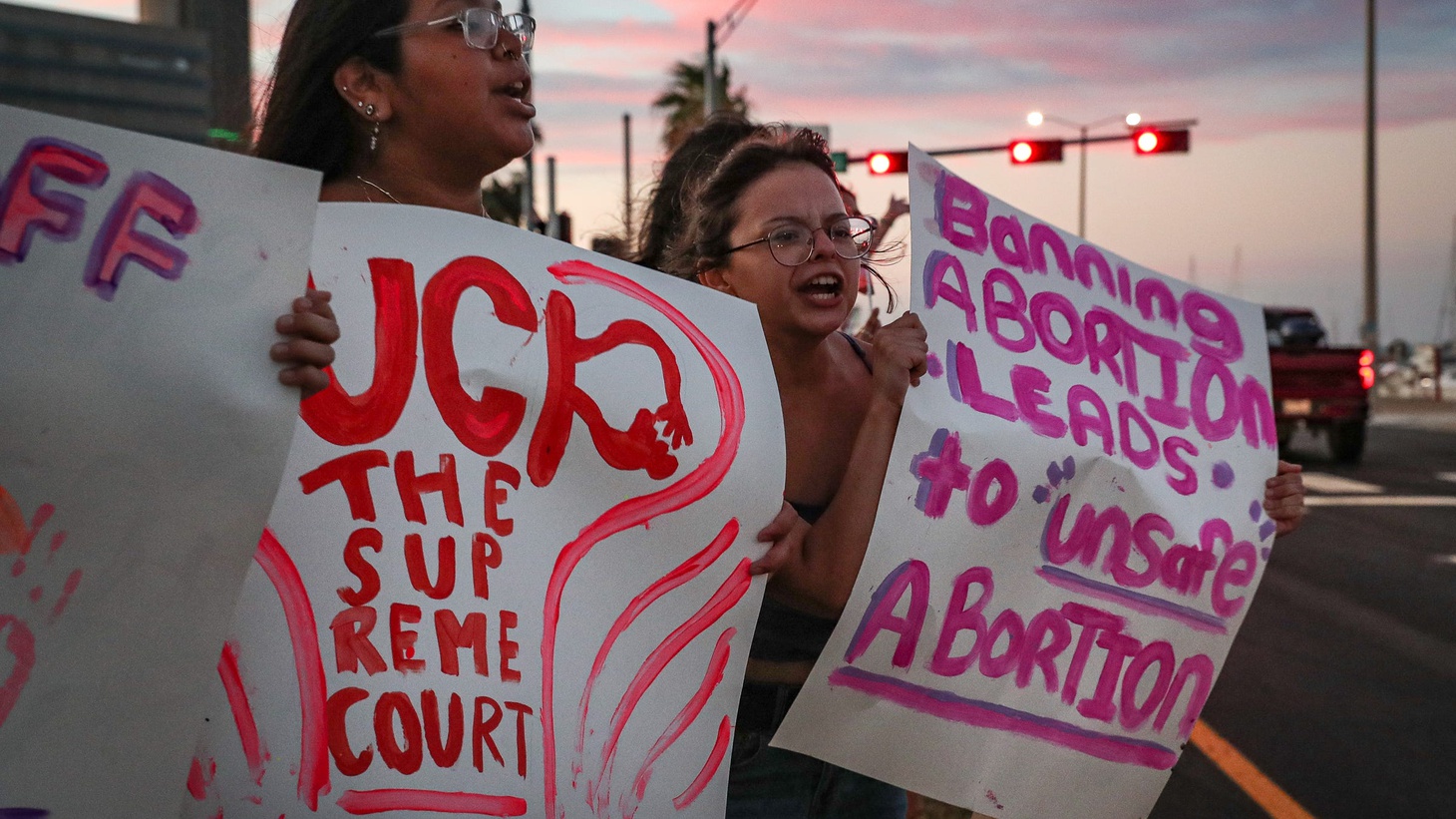 Hailey York, 19, holds a sign that says, “Banning abortion leads to unsafe abortion.” She participates in a rally in Corpus Christi on June, 26, 2022. Photo by Angela Piazza/Caller-Times / USA TODAY NETWORK via Reuters.

At least nine states have already banned abortion with very few exceptions — following the Supreme Court’s decision on Friday to overturn Roe v. Wade. One of those states is Texas, which already prohibited the procedure at roughly six weeks, when a fetal heartbeat could be detected. Texas also allows citizens to sue anyone in the state who helps a pregnant person get an abortion.

Now abortion is almost entirely banned there, even in cases of rape and incest. The only exception is when the mother’s life is endangered. The punishment for performing the procedure is life in prison and up to a $100,000 fine.

Molly Hennessy-Fiske, Houston bureau chief for the LA Times, was at the  Alamo Women’s Reproductive Services clinic in San Antonio, Texas on Friday.

She says some women had traveled eight or more hours to get to the clinic from Oklahoma, and once the ruling came down, staff explained to those waiting in the lobby that they couldn’t get abortions there anymore.

“They were saying, ‘Well, wait a minute, I just traveled, I just took time off from work. I have a couple kids. What am I supposed to do now?’ And the clinic was referring them to New Mexico. And they were saying, ‘That's like a full day's drive from San Antonio.’ And then they would have to get back to Oklahoma,” Hennessy-Fiske explains.

Patients from Texas were trying to see if they could go to New Mexico or get abortion medication by mail, she adds. “But all of this stuff takes time, and the clock was ticking for them in terms of how pregnant they were.”

One woman had to travel back to India with her husband in just a few days.  “She was begging the staff to do the abortion. Because they didn't think that they would have time to travel. They had three kids, the youngest was 7 months old. The kids were out in the minivan in the parking lot with the husband. And the staff just had to keep telling her, ‘I'm sorry but we can't break the law.’”

Hennessy-Fiske says the clinic is considering moving, but it takes a lot of work. “You then have to get re-licensed in another state. As a doctor, your staff, the nurses have to be licensed in that state. You have to figure out how to set up a business. I mean, it's a lot to do with a short period of time in order to help women who need abortions now.”

Are some women considering going to Mexico for abortions? Hennessy-Fiske says some women knew they could cross the border and legally buy misoprostol and take it back to the U.S., but they wanted to get treated by a doctor instead to make sure they took the pills correctly, and thus avoid complications.

She adds that some pharmacy staff in Mexico give strange advice on how to use abortion pills. “One guy at a pharmacy told me to take one pill every hour for six hours, and then jump up and down to expel the embryo, which is just totally incorrect.”