In a tradition started by George Washington, President Obama will deliver his Farewell Message on Tuesday, but he's already held forth on what he sees as major achievements of his foreign policy. "Thru diplomacy, we've ensured that Iran cannot obtain a nuclear weapon, without going to war with Iran, we've opened a new chapter with people of Cuba and brought nearly two hundred nations together around a climate agreement that very well could save the planet for our kids and now almost every country on Earth sees America as stronger and more respected today than eight years ago" 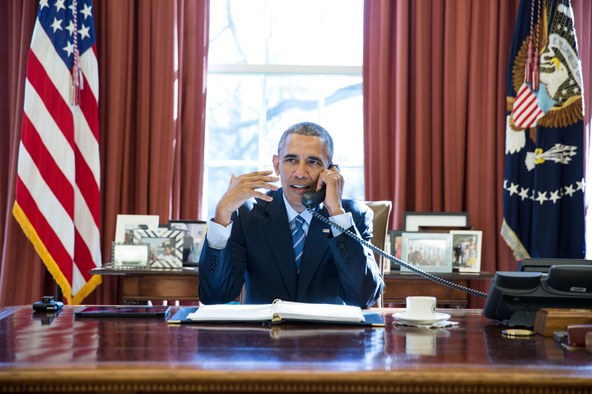 But Donald Trump and Republicans say the Iran deal, the "red line" in Syria, recognition of Cuba and relations with China and Russia all add up to "disaster." We hear about troop reductions, increasing drone use and diplomatic successes and failures in a world of unexpected conflicts and dangerous uncertainties.

America's role in world… after Obama

The President went to Capitol Hill this morning with a message for Democrats: “Don't rescue the Republicans” when it comes to repealing Obamacare.

In a tradition started by George Washington, President Obama will deliver his Farewell Message on Tuesday, but he's already held forth on what he sees as major...

Wikileaks founder Julian Assange has been roundly attacked in this country for revealing military and diplomatic secrets. But, President-elect Trump seems to believe Assange...