In the search for public money, National Football League owners are notorious for breaking promises — and yesterday's agreement to go back to the Los Angeles market is not yet a done deal. 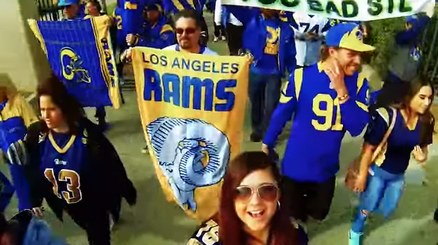 LA Rams fans rally at the LA Memorial Coliseum on January 11, 2016
to support the team's return to Southern California.

It's been 20 years since the Rams moved from LA to St. Louis and the Raiders went back to Oakland. Yesterday, NFL owners agreed to re-locate the Rams — and possibly another team — in the LA suburb of Inglewood. Rick Eckstein warns that the celebration may be early. He's a professor at Villanova and co-author of Public Dollars, Private Stadiums: the Battle over Building Sports Stadiums.

END_OF_DOCUMENT_TOKEN_TO_BE_REPLACED
KCRW's Drive to the Future: Where your support goes beyond public radio. Today, a portion of your donation goes to Inner City Law Center who provides free, high-quality legal representation to LA's precariously housed and those experiencing homelessness.
Give Now
Give Now