Studies have shown that living near freeways can lead to all sorts of negative health outcomes, from asthma and heart attacks to pre-term births and even autism. There’s actually a phrase used to describe freeway-adjacent housing: black lung lofts. 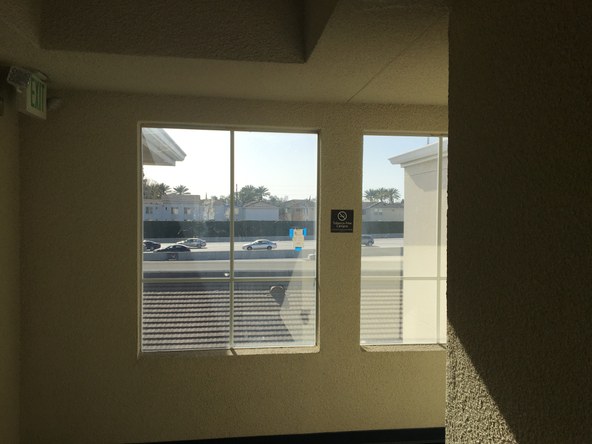 A view of the 405 freeway from a University Village apartment. Photo by Avishay Artsy.

DnA producer Avishay Artsy lives just a couple hundred feet from a freeway, at University Village. It’s a UCLA housing complex that runs along Sawtelle and Sepulveda Boulevards on either side of the 405 freeway. University Village was built in the late 90s. But the city of Los Angeles continues to approve developers’ requests to build apartments and condos near freeways. This is because it is so hard to build housing anywhere else.

Several University Village residents are now part of an air quality study that began in December. The students have monitors in their apartments as well as on the roofs of their buildings, and they can go online and track pollution levels in real time.

Avishay spoke to Dr. Yifang Zhu at the UCLA Fielding School of Public Health, who is leading the air quality study at University Village. He also spoke to his neighbors, who say they chose to live here because it’s the only affordable option near UCLA, and they’re counting the days until they can move away from the freeway. They say that tracking pollution levels has already changed their behavior.