Saving the World with Beer 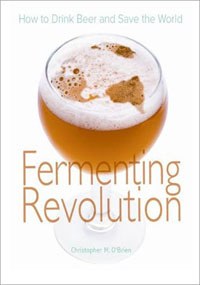 Chris O'Brien is a beer activist.  He advocates the craft beer movement, which he argues is better for the environment and the community.  Now there are about 1500 craft breweries operating in the U.S. than there were decades ago.  Some small brewers are now even growing their own hops.

Some sustainable beers are:

A catalog of local breweries is here.

Music break: The Sting by The Ragtimers

Phil Lempert is the Supermarket Guru.  He's created a social networking site for kids who are "foodies," also called " koodies ."

Ron Duprat is a Haitian-born chef living in Hollywood, Florida. He recently appeared in Season 6 of Bravo's Top Chef . He is organizing a Valentine's Day benefit in...

It's all about the chanterelle mushrooms this week. Farmer Louie Mello of San Luis Opispo is bringing in lots of chanterelles that grow wild on his property. These mushrooms...

Nat Bletter is an ethnobotanist living in Hawaii. He travels frequently to Thailand where he samples a wide variety of exotic fruits. On a recent trip he tried Durian, a...

Robert Sietsema is the restaurant critic for the Village Voice . Jonathan Gold writes the Counter Intelligence column for the LA Weekly . They are good friends and...

Amy Reiley is the author of Fork Me, Spoon Me .

What We Really Want on Valentine's Day

These are the voices of KCRW  staff and volunteers, gathered during KCRW's winter pledge drive. Music break: Squatty Roo by the John Buzon Trio

Eddie Lin writes the blog DeepEndDining.com and he is the author of Extreme Cuisine . He celebrated Tet, or Vietnamese new year with Ann Le, author of The Little Saigon...

Saving the World with Beer

Chris O'Brien is a beer activist. He advocates the craft beer movement, which he argues is better for the environment and the community. Now there are about 1500 craft...