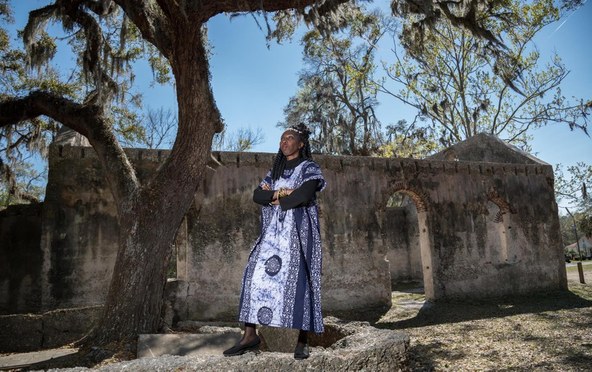 Queen Quet, Head-of-State and Chieftess of the Gullah/Geechee Nation, which
once occupied Hilton Head and most of the coastal islands that fringe
the southeastern United States. (Photo by Richard Ellis)

In her story earlier this year for The Nation and the Food & Environment Reporting Network, food policy analyst Leah Douglas exposed an obscure legal loophole through which African-Americans living in rural areas have been systematically disadvantaged. Her telling of one South Carolina family’s story sheds light on the ongoing struggle to retain black-owned farmland in the South.

A year filled to the brim with great stories

Maybe you’ve heard of Cambodian refugees owning most of the donut shops in California. But did you know the Cambodian fried chicken game in South LA is just as strong? LA...

Queen Quet, Head-of-State and Chieftess of the Gullah/Geechee Nation, which once occupied Hilton Head and most of the coastal islands that fringe the southeastern United...

Bill Esparza founded Tacolandia, the nation’s largest taco festival and he’s been dubbed the ‘Magellan of Menudo’ and the ‘Captain Cook of Carnitas’ by Gustavo Arellano.

'My Soul Looks Back'

Culinary historian Jessica Harris has cooked with Maya Angelou, Toni Morrison and James Baldwin. Harris recounts the conversations, the food and the records they played...