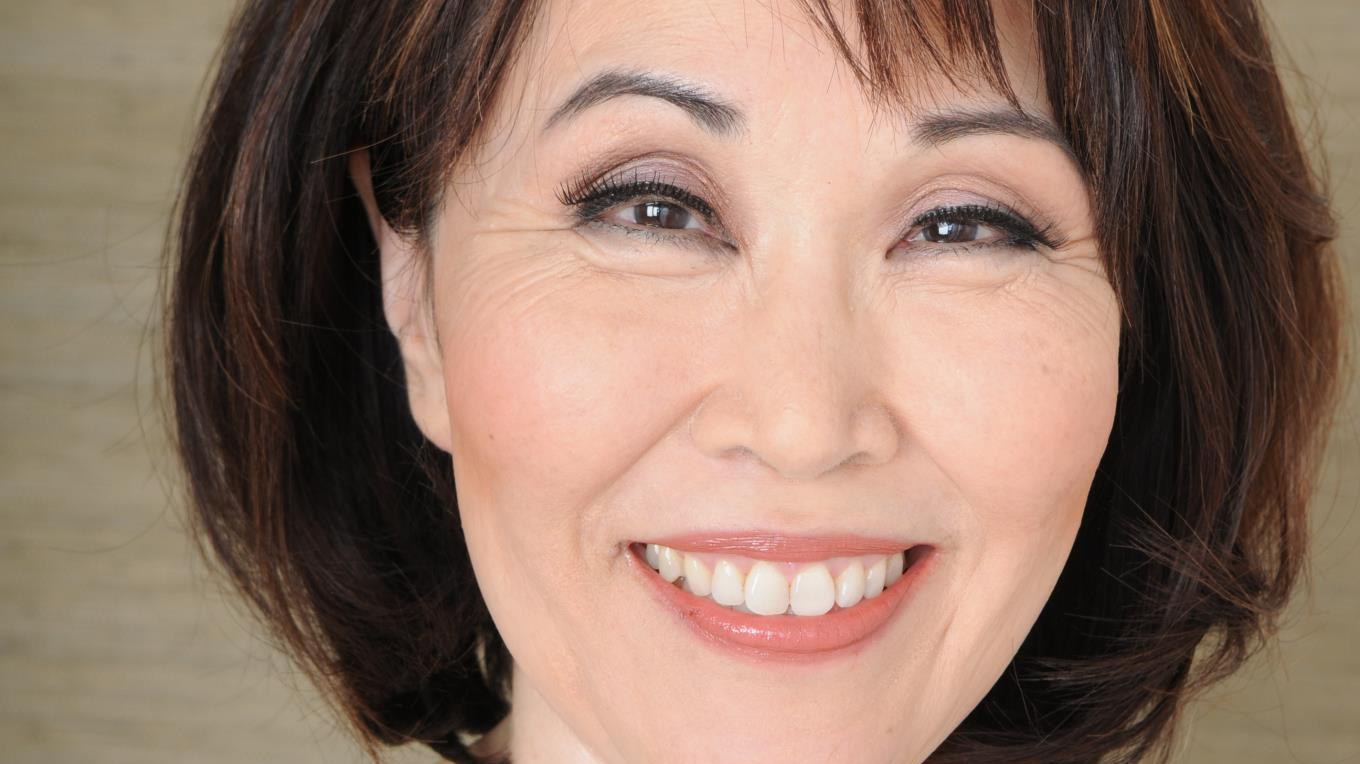 Dorinne Kay Kondo, a cultural anthropologist, describes what she refers to as the culinary equivalent of “we all look alike,” and how the most recent season of “The Great British Bake Off” fails to show the diversity of Asian Americans and their cuisine. Photo by Bader Hower.

Cringe-inducing moments on reality cooking competitions have become commonplace. What is pure escapist television for many can have an undercurrent of racism and stupidity for others. That’s what Dorinne K. Kondo calls “(dis)comfort TV.” Kondo is a dramaturg, playwright, professor of American Studies and Anthropology, and former director of Asian American Studies at the University of Southern California.  She discusses how the media with guest host Karen Tongson, including in the most recent season of “The Great British Bake Off,” has failed to represent the AAPI community.

KCRW: Let’s about our mutual relationships to the “Great British Bake Off,” which is universally lauded as a comforting TV show. What's your relationship to it?

Dorinne K. Kondo: “I too am a fan. It's become part of what I also call ‘comfort television,’ or what some other folks have called ‘ambient television.’ And particularly during this time of the pandemic and the uptick in racialized violence, there's something innocuous and soothing about it. Somebody even proposed to me, facetiously, that ‘The Great British Baking Show’ should serve as a model for the presidential elections, because there's something very cooperative and low-key amongst the contestants.

In the U.S., the cooking shows typically are animated by this braggadocio … and that is not visible here, even though people may think that inside, they're not certainly expressing that. So I have been using it as almost ambient TV, like sometimes I just keep it on, like most of the day, as background noise. I've seen every episode like easily five times, I would say. And there are also other things about it.

I think those of us in the U.S. and the other colonies may have what one analyst called ‘colonization of consciousness,’ but there's something deeply familiar and soothing about the peaceful, stately vision of the pastoral, with the manor home and the beautiful, verdant lawns, and the ducklings swimming in the pond. And there's also an important element for me because, to me, the U.K. is exotic in a certain sense. So they have quirky comedians who express their exotic British humor to me, and a vision of multicultural Great Britain that we will see is not completely a truthful depiction.”

Let's get into that. The show has these themed weeks. And in particular, during this last season, there was something called “Japan Week.”

“Let me preface this by saying that I used to be a Japan specialist. That I, actually, for my first field work, worked as a part-timer, as it were, in a factory that made both Western patisserie and Japanese sweets. Not as one of the bakers, which was like a very elevated position, but as someone who in theory helped do the wrapping and decoration. Which is also very important as in Japan, as you know.

So ‘Japan Week’ began with a kind of emphasis on what judge Paul Hollywood, who had been to Japan fairly recently, called ‘kawaii,’ the ‘cute’ aesthetic. You know, Hello Kitty, and so on and so forth. And U.K. Twitter noted that it sounded a lot like kawaii was mispronounced, of course, which means scary. The scary elements of racism raising its ugly head happened all too often there. So one was certainly the illusion of all of Asia. So Japan became any Asian country. There were contestants using Chinese flavors, Thai. Whatever it was, it was certainly not Japanese in any way. One of the motifs on a kawaii cake was a geisha on the one hand, and then pandas, for example, which are associated with China. So there was just a mishmash. It was the culinary equivalent of ‘we all look alike.’”

So something that was supposed to be explicitly “Japan Week” became this jumble of pan-Asian assumptions. I don't see this happening with, say, “French Week.”

“No, no, oh my God. Because that's the thing. There's such deep knowledge of the intricacies of this or that genre of French baking, or British baking, or Italian. Any European style, practically. So Asia becomes this kind of general, huge world area, so you can more or less bring in anything. That once again is an index of what the post-colonial theorist Gayatri Spivak called ‘zones of sanctioned ignorance,’ what are you allowed not to know? That becomes part of how a certain kind of racial power in this instance gets perpetuated. It's not that one is overtly discriminatory, necessarily, it's just that there was vast ignorance. It's not accorded the same respect and nuance as you would, say, French cuisine.”

We see in practically every reality competition show this phrase, “Asian flavors.” The idea of harnessing said flavors either for success, or the idea of Asian flavors as unrecognizable or off-putting. In this particular episode of “The Great British Bake Off,” there were a lot of scrunched up faces vis-a-vis matcha, yuzu, and other ingredients like that. Tell us a little bit about what happened in the show and what you think about this term, “Asian flavors,” and how it has worked in the food competition world.

“I was particularly struck in the ‘Great British Bake Off’ in earlier seasons, but also this season, by the inability to appreciate the depth and subtlety of certain kinds of ‘Asian flavors,’ in this case, Japanese flavors. For example, matcha, which is originally a tea ceremony tea, so very refined and expensive. And you would only have a tiny little scoop-full, and all these elaborate whisks in the traditional tea ceremony, but now it's become widely marketed.

But in season five, the contestant Rav, who had traveled in Japan extensively, brought in matcha and yuzu, a kind of fruit that is neither lemon nor lime. So judge Paul Hollywood came down on Rav extremely hard, like, ‘My mind is trying to decide whether this is lemon or lime.’ And he was so discombobulated that it made his comments very harsh and unpleasant. He told Rob, ‘Watch your flavors.’ If Hollywood had been a little less provincial, I think Rob would have been evaluated more highly.”

It's like yuzu becomes the “inscrutable oriental flavor” to Paul Hollywood.

“Absolutely. And then Mary Berry, the crown ‘grande dame’ of British baking, just found matcha ‘grassy,’ you know, ‘I just don't like it. It is grassy to me.’ If you'd grown up with it, it wouldn't be strange. In fact, it would be very elegant. Of course, I'm sure there are some Japanese who don't like it much either, but I don't think that they would find it disgusting in that same way.”

Which brings me to another implicit bias question vis-a-vis cooking competition shows like “GBBO,” which is the very concept of meritocracy and the justifications for who stays or who goes … [this resembles] how we evaluate performance through the lens of race in other contexts.

“Yes, I think it is very much so. And I think it's undergirded by factors that come into play in all settings, academic and in the theater world. ... Ruha Benjamin, a professor of African American Studies at Princeton, calls whiteness a “second chance.” So you'll give someone the benefit of the doubt.

In this last season, for example, there was a kind of debonair, posh, opera-going, refined, ambitious baker, Rowan, who had great ideas, but he just never finished any of them. And then there was Florence, another white contestant, very pleasant. But she came last in the technical competition. She just seemed like a messy baker, frankly. And this was episode two. There was a South Asian contestant, Makbul, who was very, at that point, solidly in the middle. He had come third in the technical, so that was very good for a second episode. But somehow, because he didn't knock the socks off one of the judges, he was eliminated.

In the first episode, it was equally bad. Because with Maria, who had immigrated from Jamaica, it was just using stereotypes of Black women as excessive. So her flavors were “too much.” They were “too spicy,” “too loud,” in a certain way. I was just horrified for the first two shows. I watched, but with such a sense of dread and fear, it's like watching a horror show instead of watching a baking show.”

I want to underscore that diving into these issues is not about canceling things or media that fail at AAPI representation. It's about expecting more out of what we love and enjoy. Could you tell us a little bit about how we can continue to still derive joy from a show like this, even while acknowledging its flaws?

“I think that minoritized people, along whatever axis, that's how we operate. We have to, because there's so little that actually speaks directly to us in a way that we can ambivalently enjoy. So this process of bracketing, like, ‘Oh, I don't like that part. But yes, I love this part,’ is kind of always in place. And it's the kind of extra energy and extra effort that it takes to find the comfort and joy. It is possible. I still love the ‘Great British Baking Show.’ I keep it on a lot, but I just try not to play those episodes that I know are especially problematic.

I just hope that people who are not in a minoritarian position will recognize this kind of extra effort. A friend of mine said, ‘Oh, it's like you always have to be braced at every minute.’ And that's right, I think, even in the comfort of your own home. That said, I think that there are still possibilities to push these shows that exist. But I think the real answer may be: Let's create our own, and let's find places where we can find solidarity and joy and connect with others.”