Food writer and fermentation revivalist Sandor Katz has been a longtime guest on Good Food, dolling out his expertise to help demystify fermentation and empower people to reclaim the transformational culinary process. His check-ins over the years have allowed us to follow his journey through the world. Now, his latest book, “Sandor Katz’s Fermentation Journeys,” charts his literal journeys across the world as he follows his curiosity and encounters fermentation traditions around the globe.

KCRW: How important has traveled been to the enlargement of your fermentation journey?

What was it that you were exploring that these travels helped?

The first time I ever encountered a home fermented beverage, a beverage that didn't come out of a factory or a production facility somewhere, was palm wine in Niger. In my travels in West Africa, I encountered palm wine and also millet beer, and several different types of home fermented beverages. And I very much enjoyed them. And I enjoyed the fact that they were served out of opened vessels and appeared to be homemade ... And then some years later, when I got interested in fermentation, and I started looking at the literature that exists in the U.S. for making wine at home home brewing, it seemed so technically demanding.

It said that I needed to buy these sanitizing chemicals, specific strains of yeast, have an instrument to read the specific gravity. It was all these technological things that just made me wonder, “Gosh, in these small villages where we were encountering fermented beverages in Africa, I wonder how they got that stuff … by what means they were making beverages without all of these chemicals and accoutrements. And so it really just inspired me to ask some questions that I wouldn't have known to ask had I not had those experiences.”

Can you talk about the douchi cookies that you saw in China?

I understand douchi to be soybeans fermented whole with Aspergillus fungus, which is like what's used to make koji, and then it's brined and dried. Every Chinese restaurant I've ever been to has on the menu things with black bean sauce — you know, broccoli with black bean sauce and these wonderful, rich, flavorful, black beans that are thought of as the historical precursor to soy sauce and miso, [which] are what I know is Doshi. But evidently, it's understood in some regions of China to be something quite different.

And when I was in a village called Xiangfen in the province of Guizhou about four years ago, there were these little cookies that we kept seeing in people's houses ... little, round, dark, dried blocks that people were making dipping sauces out of. They were pulverizing them and putting them in vinegar and water and making little dipping sauces out of it. And then somebody invited us to their home to see how they were made. And we assumed that they involved in Aspergillus mold, since they were called douchi. But as soon as I opened the door to this family's home, I smelt natto. And then they gave me a job mashing up these fermented beans. And as I began mashing the beans, the texture of them shouted out natto to me.

What I realized is that they were fermenting the soybean spontaneously, and what was growing on them was the same bacteria that creates natto. And it actually turns out to be quite widespread and in use in many parts of Asia, as well as West Africa. I think that because fermentation is a biological phenomenon, based on organisms that are typically present on the foods that we are fermenting, it's not altogether different in different places. Frequently we see very similar bacteria or fungi that are just part of specific kinds of foods that are applied in diverse fermentation practices in diverse locales.

Talk about how often byproducts of one type of fermentation can be a starting point for another, like your persimmon vinegar, for example.

It’s a perfect time for persimmon vinegar. And it couldn't be simpler. The only ingredient is persimmons. It's fine if some of them aren't ripe. You basically just put persimmons in your vessel, and as they ripen, they begin to liquefy a little. And eventually, they become covered with liquid, and they continue to ferment and they'll become a little bit alcoholic. And as long as they have access to oxygen, the alcohol will then turn into vinegar. And you just leave it until winter, probably three months or so. And then your vinegar is ready and you strain it out.

But what you're talking about in terms of using the byproduct of one process as the starting point for the next, then there's a kind of pickle you can make by basically taking vegetables and putting them in the solid residue of the persimmon vinegar. Then you get these beautiful persimmon flavored pickled vegetables. There are a lot of instances where one ferment is used as an element of another. Yogurt is a great example of this. In the book, I have this Turkish ferment that is yogurt, and bulgur or another form of wheat, and vegetables, and they're all mixed together, fermented, and then dried. And it's in Turkish cuisine, it's used really as a way of preserving the summer harvest and enjoying it in soups and stews all winter long.

What are dehydrated brine salts, and where did you first see them?

Generally, I eat fermented vegetables in their wet form, right out of the crock or the jar. But certainly through the years I have played around with and seen other people dehydrate fermented vegetables themselves. Sometimes people use it as a salvage protocol for a batch of fermented vegetables that goes too long and starts to get a little soft and mushy. They'll dehydrate it to make it crisp. Through the raw food movement, I've seen a lot of dehydrated cracker type things that incorporate fermented vegetables. But this fellow who I encountered in the Netherlands was actually dehydrating the brine itself into crystalline salts. And they're beautiful. It's salt that incorporates within it all of these flavors of the fermentation, so it has some sourness, and whatever kinds of vegetables that ferment was based on, it has hints of those flavors as well. And so ... you can have different colors, different flavors. The key to getting the brine to crystallize is to actually add more salt to it, to basically saturate the solution with as much salt as you can get into it. And then as you dehydrate it, whether that's in a dehydrator, an oven, in the sun, you'll get much more crystal if you get a higher proportion of salt into the brine.

Do any probiotic elements still remain?

I would say it depends on at what temperature you dehydrated. But sure, I mean, he talks about his salts, which he does in a dehydrator below body temperature. He says that he has seen people use those as a starter, which certainly suggests that they're maintaining viability of the probiotic bacteria.

One of the most interesting Innovations I saw in your book were the tempeh bowls in Amsterdam. Could you describe how the man that you met there thought about doing these?

They were really exquisite, being served soup in an edible bowl. It's this kind of hip cafe in Amsterdam called a Mediamatic ... They basically chose a plastic bowl with a shape that they liked, they drilled some holes into two bowls like that, and that became their form. And then they selected a rather slender bean so that it wouldn't be a very thick bowl that was unwieldy, so that the beans could fall in a relatively thin layer. And then you very briefly cook the beans, cool them down to body temperature, mix in the starter, put them in the forms that you create, incubate them between about 80 and 90 degrees Fahrenheit for about 24 hours, and then those beans are bound together by the fungus in the shape of the bowls. Then they can remove the forms, and then they briefly toast the bowls before they put soup in it and serve them. But oh, that was just such a beautiful application of tempeh. And for anyone with a zero waste aesthetic, it's just a beautiful way to serve food.

Tell me about chucula hot chocolate, with the herbal enhancements.

First of all, I want to just point out that in the book I have a section about visiting this forest restoration cacao project and learning about where fermentation fits into the processing of chocolate, and when the fresh fruits are harvested, the cacao seeds are encased in sweet fruit. And it just spontaneously ferments very quickly. That fruit is delicious, the juice that comes off of it is delicious, and the fermented juice of it is even more delicious. And the fermentation is really an essential part of developing the flavor of the chocolate that so many of us love so much.

Chucula is a process that I learned from Esteban, who was my host in Colombia. What's really great about this is it's this thick, substantial beverage that is chocolate mixed with roasted and ground corn and beans. So you create these balls of chocolate mixed with these roasted, ground grains and some sugar, and whatever other ingredients or seasonings you might want to add, then you just have these dried balls that are shelf stable. And if you want to make a chocolate beverage, whether it's a hot chocolate beverage using hot water, or you can even make a cold beverage the same way ... just mix a little hot water in with those and they melt and make a really wonderful beverage. But it's not just the chocolate. The ground grains and beans just make it a thick beverage and so much more substantial and satisfying a beverage than the chocolate alone would. 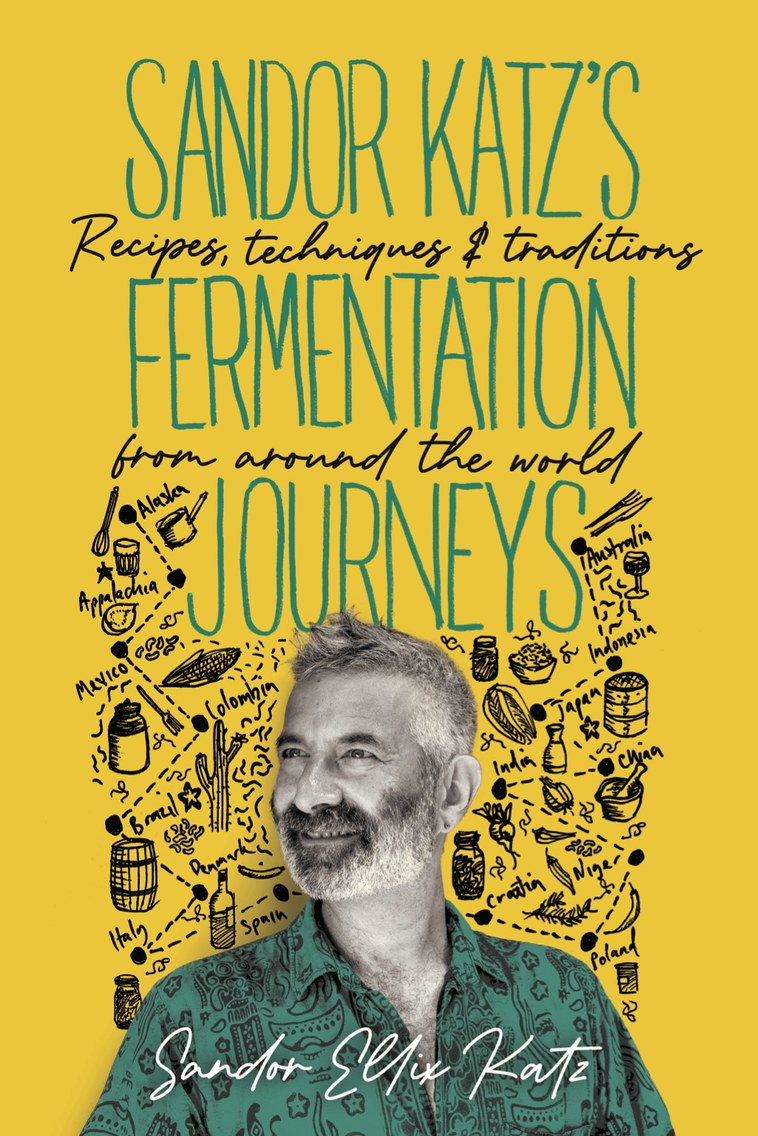 Bryant Terry, educator and chef-in-residence at the Museum of the African Diaspora, had a vision of representation and diversity in the culinary publishing world.

Food writer and fermentation revivalist Sandor Katz has been a longtime guest on Good Food, dolling out his expertise to help demystify fermentation and empower people to...

Preserving and transforming future food one vat at a time

Alex Hozven of The Cultured Pickle Shop in Berkeley, California has a reputation within the fermentation community for the sheer breadth and distinctiveness of her practice.

“When you grow something, there is always a limitation of the space, the weather. But coming here, the variety of what I saw. I was like, ‘Wow, I’m in a paradise,’” says...

‘I spy’ Tahitian squash at the farmer’s market

Tahitian squash has a long neck and thick wall with a mesh of seeds, and Providence Chef de Cuisine Tristan Aitchison tells market correspondent Gillian Ferguson that it...