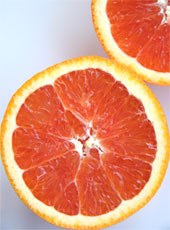 Armando Garcia brings in delicious cocktail grapefuit which are full of seeds but taste more like an orange than a bitter grapefruit.  Cara Cara navel oranges are also in season. They taste better than a traditional navel and have a pink flesh.  Both are in season through the summer.

Jean Francois Meteigner of La Cachette Bistro in Santa Monica tells us what do to with rutabagas. The root vegetable looks like a large turnip with an orange hue. The taste is somewhere between a turnip and a Garnet yam.  Jean Francois adds them into a root vegetable cous cous and also makes a cumin-seasoned soup with them. He also recommends wrapping them in foil and baking them in the oven like you would a baked potato.

Jonathan Gold writes the Counter Intelligence column for the LA Weekly, for which he won the Pulitzer Prize. He recommends Mantee Cafe in Studio City for Armenian food...

Thomas Keller is the owner of The French Laundry , Bouchon and ad hoc in Yountville, CA. He also owns Bouchon in Las Vegas and now Beverly Hills as well as Per Se in...

Dr. Susan Brown studies the alkaline / acid balance in the body and how it relates to bone health. She says that the body tries to maintain a slightly alkaline level....

Armando Garcia brings in delicious cocktail grapefuit which are full of seeds but taste more like an orange than a bitter grapefruit. Cara Cara navel oranges are also in...

Jack Bishop is the Editorial Director at America's Test Kitchen . He likes to make a meat loaf with ground veal, beef and pork. He also likes to use saltines soaked in...

Shirley Corriher is the author of Bakewise .  One of her favorite recipes from the book is her Great American Poundcake.