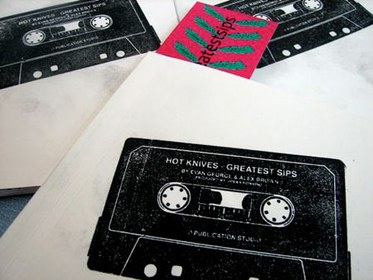 Evan George and Alex Brown are the Hot Knives.  Their new book, Greatest Sips, pairs beer with cheese and music. Buy it here.

More in Evan's conversation with Evan and Alex on the Good Food Blog.

Tricking out the Trucks

RoadStoves owns many of the gourmet food trucks in Los Angeles. They are an off-shoot of the company A La Carte, which has operated catering trucks for about 40 years....

The Olympics of Food

Matt and Ted Lee are the authors of The Lee Bros. Simple Fresh Southern .   Listen to their comments about the new ambrosia salad they've developed.

It's time to plant tomatoes and Windrose Organic Farms from Paso Robles grows over 200 different tomato varieties. They can help you find varieties that will grow in...

Jonathan Safran Foer is the author of the novels E xtremely Loud and Incredibly Close , and Everything is Illuminated . His most recent book is a work of non-fiction...

Evan George and Alex Brown are the Hot Knives .  Their new book, Greatest Sips , pairs beer with cheese and music. Buy it here .

Javier Cabral writes the blog Teenage Glutster . He hails from East LA where he has been eating from taco trucks for years. Javier likes Frysmith , Marked 5 , Kogi...

The Man Behind Kogi

Roy Choi is the chef and co-owner of Kogi BBQ, selling Korean meat wrapped in a corn tortilla. There are now four Kogi trucks and they can be found all over Los...

END_OF_DOCUMENT_TOKEN_TO_BE_REPLACED
KCRW's Pledge Drive: Donate today to be automatically entered to win $1,000 in free food from Postmates!
GIVE NOW
Give Now