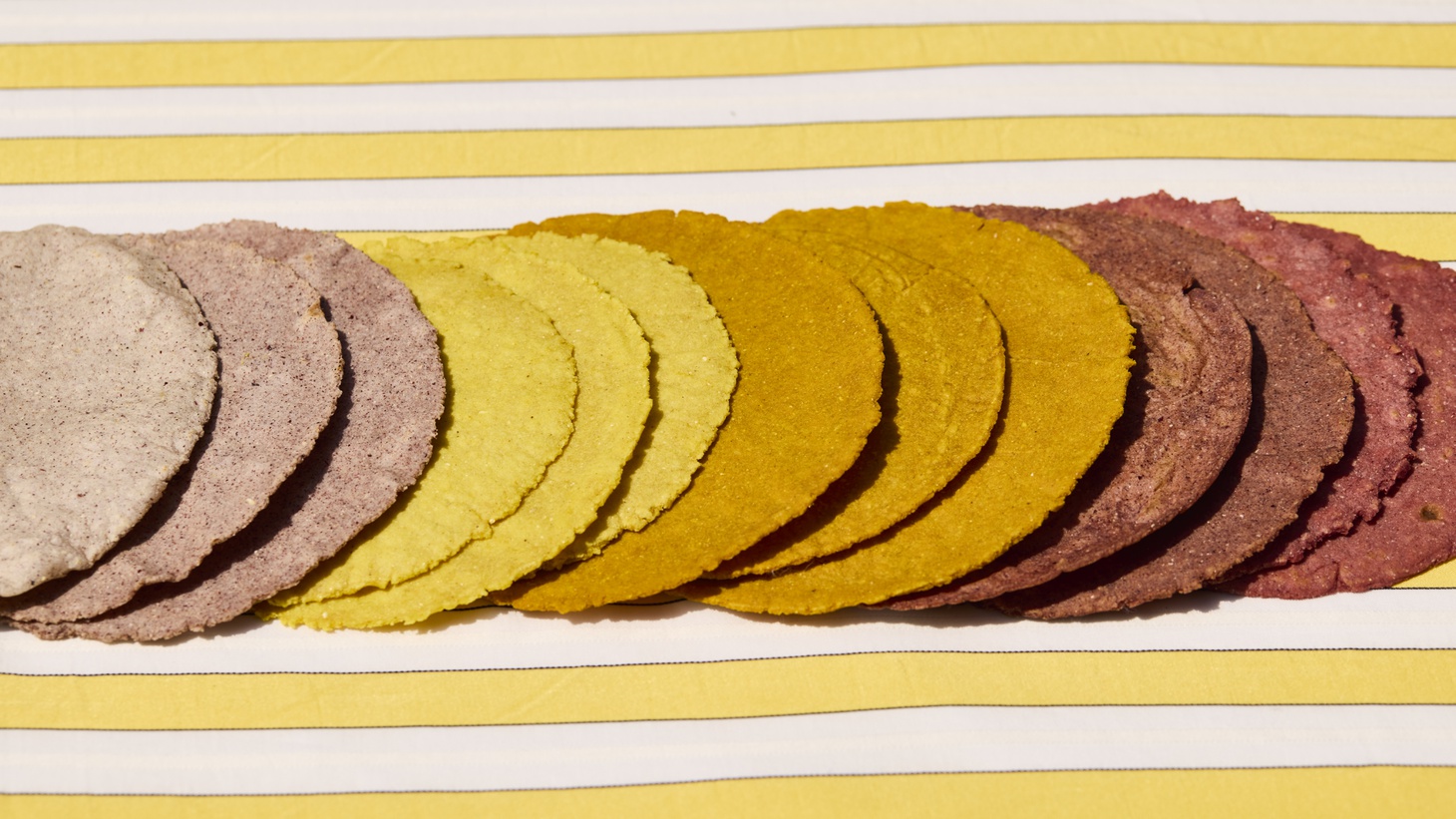 "I thought I grew up eating the most authentic tortillas," says Jorge Gaviria, who confesses his dream was to open up the equivalent of Tartine Bakery for tortillas.
Photo by Graydon Herriott.

Jorge Gaviria, founder of Masienda and author of "Masa: Techniques, Recipes, and Reflections on a Timeless Staple," reflects on starting his own company devoted to corn.

KCRW: So if you're young and ambitious and working in restaurants, what do you do? How do you push back against the corporate machine and carve out a little piece of the world to call your own? Growing up in a Cuban American household in Florida, Jorge Gaviria thought he knew masa.

Jorge Gaviria: I thought I grew up eating the most authentic tortillas. They weren't Mission, they weren't even Guerrero. They were a local brand from a local tortilleria in Miami, or so I thought. It actually turned out that they were using Maseca, which is what most of the tortillerias across the country use. They were all pretty much designed to taste exactly the same. They just felt like that local branding element that made it feel like it was sort of special to my hometown. It just had a Mexican flag on it and very, very bleached white tortillas that tasted as acidic as they smelled. But I grew up eating carnitas on the weekends. My favorite snack after school was just a munster cheese tostada, which is as much of a cultural collision as you can imagine it to be, made in a toaster oven. 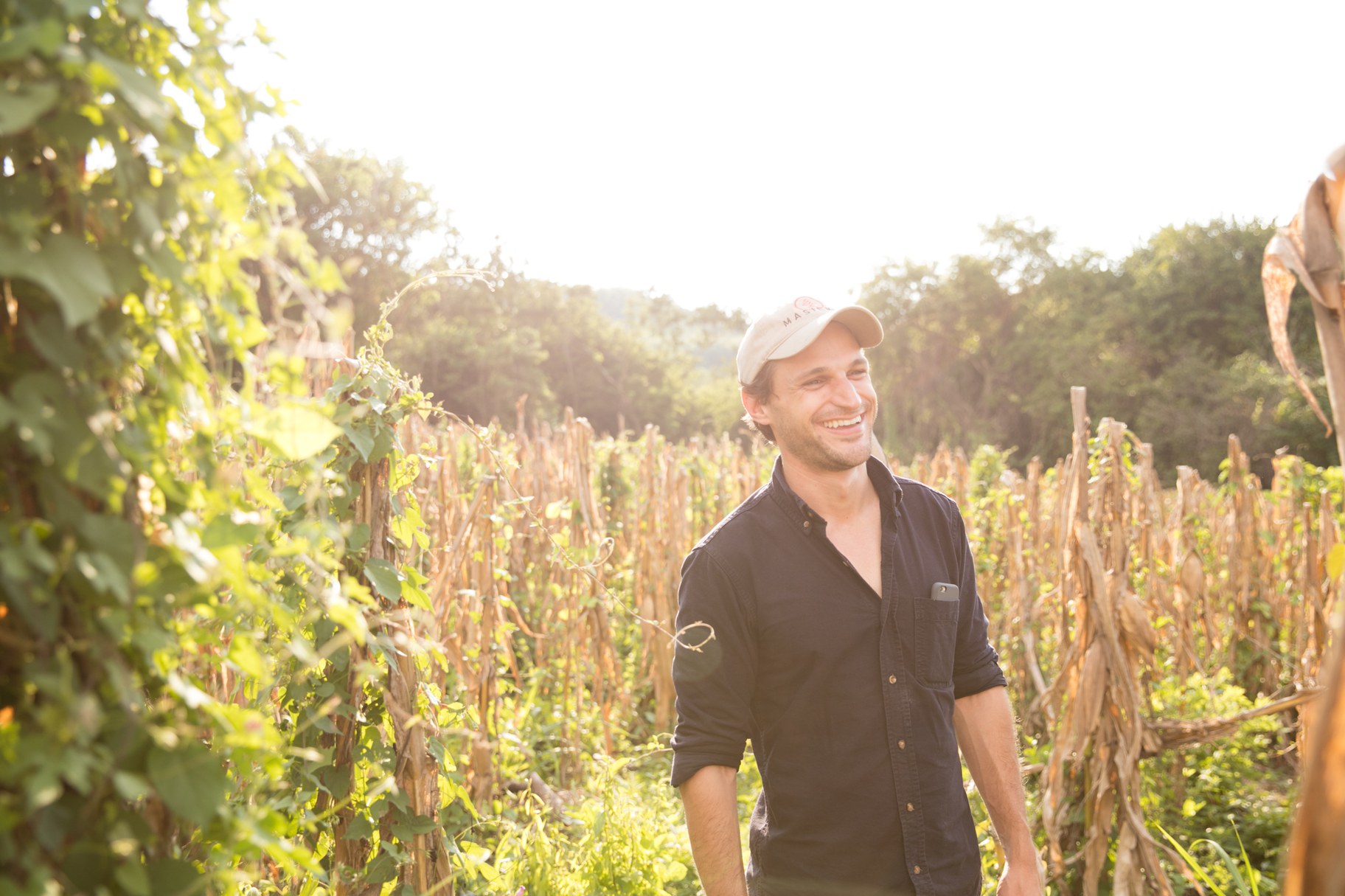 "You couldn't take it (landrace corn) and grow it in Iowa with any success. It's been locally adapted for thousands of years and has a terroir and characteristic all unto itself," says Masienda founder Jorge Gaviria. Photo by Molly DeCoudreaux.

As Jorge broadened his horizons and developed his palate, he started to ask the question: How is a tortilla actually made?

Staging at a restaurant in New York, he saw tortillas being made "from scratch" — but with Maseca. He wasn't satisfied. At the time, his dream was to open up the equivalent of Tartine Bakery for tortillas.

Jorge Gaviria: I didn't have any concept or business plan how that would happen, it just sounded really cool.

With a lot of confidence and a lot of naivety, I was like, "All right, I guess the most important thing here that we need to figure out is the sourcing." You look around the U.S., even some of the darlings of the heirloom corn movement are all sourcing from similar places. There wasn't a lot of diversity in that story. I don't think it told the story that I was looking for of the foodway of masa. I think if you're going to trace that, you've got to go to Mexico.

During his research trips, Jorge saw how government policies had displaced subsistence corn farmers in Mexico.

I thought, "Man, that's amazing." What if we just leveled the playing field, or at least offered an option to this group of 3 million farmers that are still doing this work and growing the greatest quality corn in the world? What could happen? 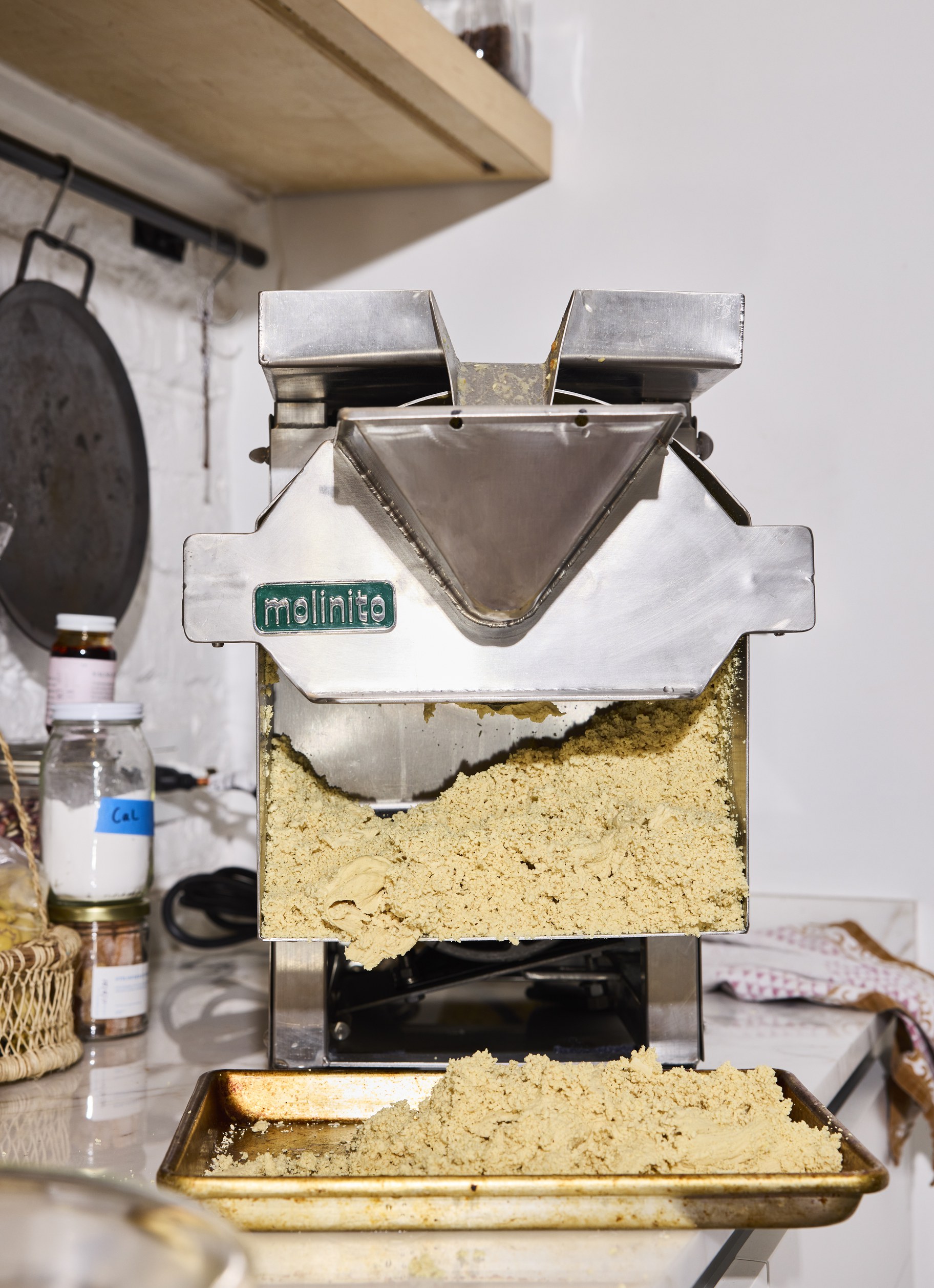 Compact molinos, or mills, assist in the nixtamalization of the kernel-to-masa cycle. Photo by Graydon Herriott.

When he started Masienda in 2014, Jorge was sourcing most of his corn from Oaxaca. He has since branched out.

I think we're in six or seven states, depending on the year, on the harvest. But Oaxaca, despite being one of the smallest states in Mexico, it's about 4% of the total land share. It is the most biodiverse of any state. Of the 59 landraces, 35 of them come from Oaxaca, which is pretty amazing.

The term "landrace corn" refers to heirloom corn that has, over many years, been optimized and adapted to a particular area and climate.

You couldn't take it and grow it in Iowa with any success. It's been locally adapted for thousands of years and has a terroir and characteristic all unto itself.

Starting a masa company that required him to import heirloom corn from Mexico to the United States meant Masienda had to figure out a supply chain, one that was equitable for the farmers they worked with. The commercialization of quinoa was a cautionary tale.

When the ancient Andean grain became popular around the world, the demand drove up the price. Unfortunately, that meant poorer residents of Peru and Bolivia, who had eaten quinoa as a staple food, could no longer afford it. Jorge Gaviria didn't want the same thing to happen to heirloom corn. 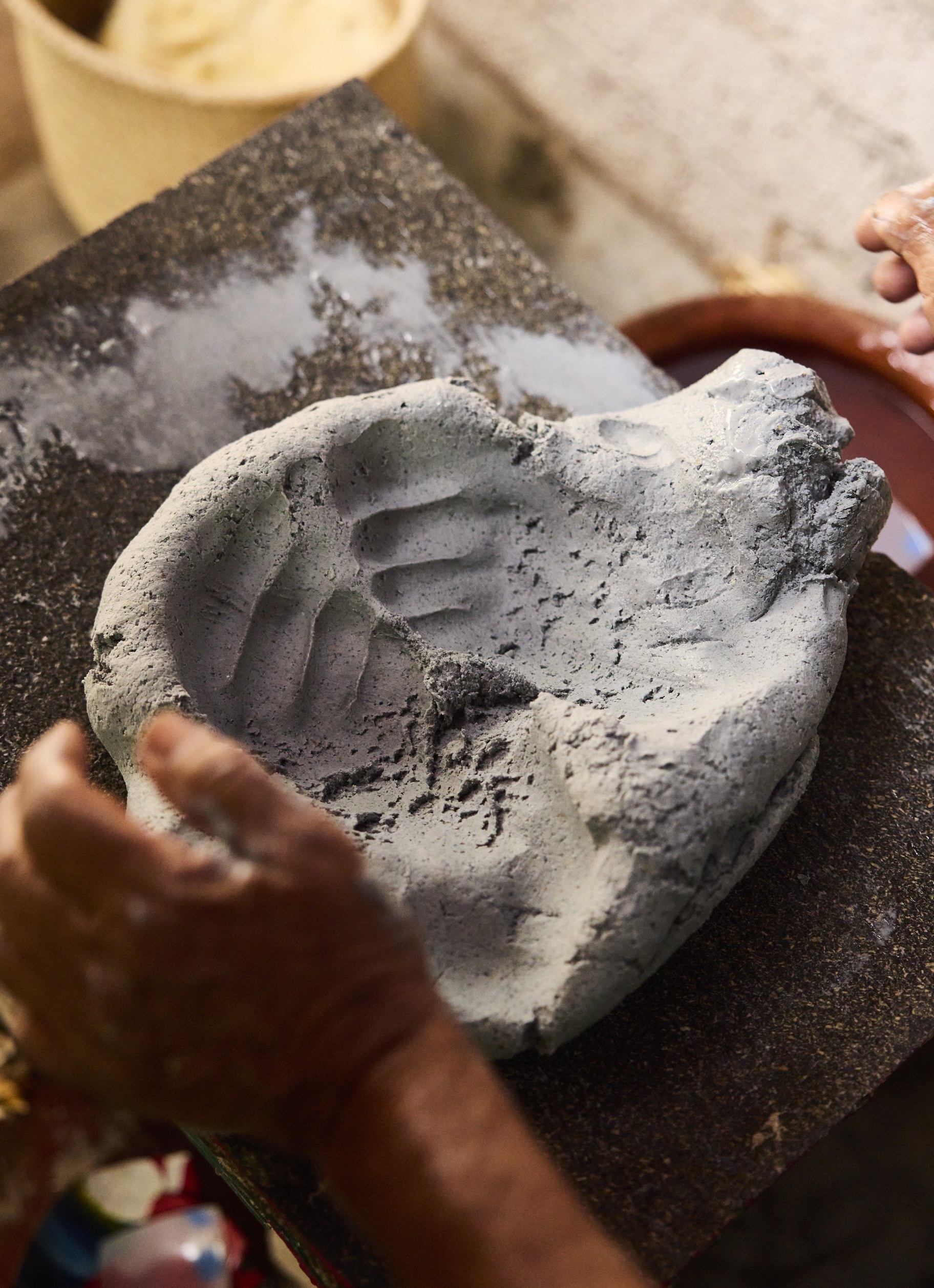 Fresh masa is made from kernels of corn and applications reach beyond the humble, ubiquitous tortilla. Photo by Graydon Herriott.

It's really expensive for farmers to take product to market, especially given the rural areas that they live in. To take 200 pounds of corn to a market two and a half hours away when you don't have a car, you don't have access to public transportation, it's a non-starter. They would work with these intermediaries or coyotes in some cases, as they're known, to get corn to market. Sometimes they wouldn't end up getting paid or they'd get paid half of what they said they would get paid.

No one had ever paid cash at three to five times the commodity price in full and made them whole as soon as harvest was done. No one had ever thought about that or had certainly ever done it in that way.

From 12 farmers in Oaxaca to a network of approximately 2,000 farmers throughout Mexico and from 40,000 pounds of corn per year to 2 million, Masienda has grown. But Jorge has had to be careful.

We haven't necessarily scaled with each individual farmer, because they're growing for subsistence purposes. What they grow for themselves is really the priority. And if they have any surplus, that's what we buy. They're not commercial growers, in that true sense. They're truly subsistence farmers and we're just giving them that additional surplus opportunity there to sell it.

Compared to the 846 billion — that's billion with a B — pounds of corn produced each year in the United States, it's a drop in the bucket.

When I first started, I had two really strong drivers. The first was I wanted to "disrupt" Maseca and GRUMA. And I really wanted to stick it to the man.  The truth is that convenient food exists for a reason. There's a reason, there's a whole structure that supports it and I've been pretty humbled. It's also really hard to produce food at scale. I got to give anybody who's producing food at that scale credit, no matter what their political or philosophical values are. It's kind of a miracle to do it and, frankly, not kill anyone.

Gaviria remains a student of masa but he has also become something of a teacher. This summer, he released a  271-page book, Masa: Techniques, Recipes and Reflections on a Timeless Staple. The book, which was the inspiration for this episode of Good Food, unpacks the kernel-to-masa process while sharing science, history, practical tips and plenty of recipes — tlayudas, tetelas, pupusas, atole, waffles, a masa samosa and a corn dog that actually tastes like corn. For Jorge Gaviria, it was both a practical and a personal mission.

Masa has been nine years in the making. I think, starting with my initial plunge into the subject, it was something that was really hard for me to train chefs on how to use our corn when there wasn't more than a page or two in a book anywhere on how to do this. Just seeing some of my heroes get totally flummoxed and humbled by making masa in house, to me was an eye-opening experience. I think there needs to be a dedicated resource for this.

*THE SMUSH TEST*
To test the masa for the right level of moisture, roll a ping-pong-size ball (11⁄2 in [4 cm]) and flatten it between the palms of your hands. If the edges of the flattened masa are cracking, add more water until it passes the same test without cracking. (The ideal texture is moist but not sticky, pliable but not gummy.) Once it does, you’re ready to get into tortilla pressing.

Storage: Table tortilla masa contains 57 to 70 percent moisture, which means that it will ferment quickly at
ambient temperatures. While I always prefer to use fresh masa immediately, you may choose to store it in the
refrigerator for up to 3 days or in the freezer for up to 3 months. Bear in mind, however, that refrigerated or
frozen masa will lose some elasticity over time, and you will most likely need to reincorporate additional moisture into the masa and mix it before use. If you are storing your masa at room temperature, I recommend holding for no longer than 4 hours. Even then, you may need to reincorporate a bit of moisture, as water will have evaporated from the masa, drying it out.

Reprinted with permission from Masa: Techniques, Recipes, and Reflections on a Timeless Staple by Jorge Gaviria, © 2022. Published by Chronicle Books. Photographs © Graydon Herriott.

More: Did today's episode make you hungry? Find the works of those you heard on our masa show. You can also head to Masienda's website for their Masa Map, where you'll find a list of great masa spots around the country.