Corn, water, and lime are the only ingredients needed to make tortillas — tell that to GRUMA 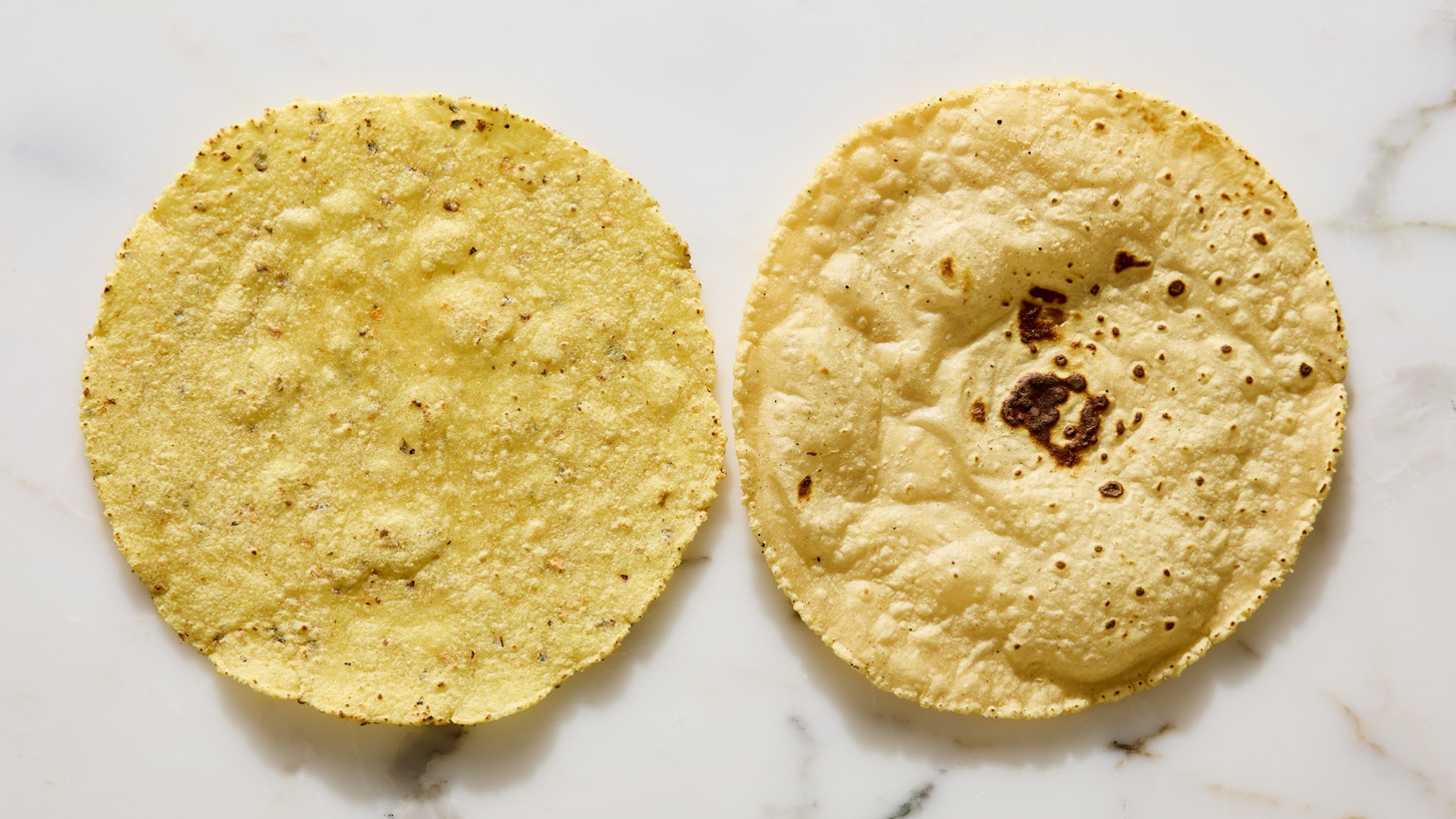 Time and money are two of the biggest ingredients in making a good tortilla but then came masa harina, and GRUMA was nipping at its heels. Photo by Graydon Herriott.

Journalists Gustavo Arellano and Elizabeth Dunn provide a brief history of GRUMA, a manufacturer of masa harina and bedfellow of the Mexican government. While professor Alyshia Gálvez outlines the ramifications of NAFTA on the agricultural economy of Mexico.

For centuries, people made masa pretty much the same way. If a town had a molinaro, a miller,  who could grind everyone's corn, that sped up the process. But from start to finish, it remained time-consuming… until the invention of masa harina. We can't talk about masa harina without talking about GRUMA, or as you may have heard journalist and Tortilla Tournament founder Gustavo Arellano describe the company.

Gustavo Arellano: So for me, GRUMA is the Thanos of the tortilla world. Literally, snaps its fingers and just destroys independent tortillerias, buys them up. It is a menace to good tortilla eating.

I will always support the people who are doing it the right way. And because it's easy, not just because they're underdogs, but because also their tortillas inevitably taste better.

Look at the package of any GRUMA product, you're going to have a bunch of ingredients there. A corn tortilla should only have three ingredients. Corn, water, and lime.

GRUMA, a portmanteau of Grupo Maseca, is the massive multinational company that makes Maseca, the dominant brand of masa harina, both in Mexico and the United States. GRUMA also makes the two top-selling tortilla brands here in the U.S.

Gustavo Arellano: Their two biggest selling brands are Mission tortillas for non-Mexicans and Guerrero tortillas for Mexicans. And we're talking about in the United States.

GRUMA is by far the biggest masa harina company, the biggest tortilla company in the world. And as I wrote in an article for KCRW, they're also very good at tortilla washing.

How big is GRUMA?

Elizabeth Dunn: GRUMA today is a multinational corn flour and tortilla juggernaut with operations all over the world. They have at least 70 plants, over 20,000 employees, and they really dominate the tortilla business globally.

In 2021, GRUMA had net sales of approximately $4 billion. What does that kind of tortilla domination mean for consumers?

We're talking about savings of about 50 to 75 cents. But still, for working class Latinos, they're going to go with whatever's cheapest for them. Sadly, when we talk about cheap, we're also talking about the flavors of these tortillas.

GRUMA, which has been around since the 1950s, also like s to make a bold claim. In promotional copy on its site, the company used to say it had invented masa harina. But that's not exactly true.

Elizabeth Dunn: So masa harina was invented by a man named José Bartolome Martinez, and it was invented in San Antonio, Texas around the turn of the 20th century.

Martinez had a masa mill in San Antonio and he decided that he wanted to experiment with dehydrating the masa to see if you could add water later and save yourself a lot of work. And he debuted a dried corn flour product called Tamalina in 1908.

Why is masa harina such a big deal?

Gustavo Arellano: Cuz here's the thing with masa, fresh masa does not keep very well. In fact, basically, it gets rotten after a couple of days if it's fresh. So in the old days, you know you could romanticize making your masa fresh every single day, but it's really, really hard work.

Elizabeth Dunn: So it is an incredibly nuanced process that involves, first of all, historically, first growing the corn and then soaking the corn in a mixture of lime and water to do what's called nixtamalizing it. And then after that, grinding the corn, often by hand with stones, and then forming that ground corn into a dough which is then pressed into tortillas and griddled. And there are just so many different factors that can create a variation in that process that really requires a long apprenticeship to get this process right.

Gustavo Arellano: Masa harina was a godsend for many women who are in households who wanted masa at the instant where you could just put it away for a couple weeks, a couple months and when you need to make masa, you just use water and voila, there you have your rehydrated masa.

Unfortunately, the story of José Bartolome Martinez, the creator of masa harina, was largely forgotten. So when GRUMA claimed it invented the stuff, people believed them.

Elizabeth Dunn: GRUMA started in 1949 and it was founded by a man named Roberto González Barrera. And he'd been an entrepreneurial kid. He grew up in Mexico working as a shoeshine. By the time he was 15, he had his own business selling vegetables. I believe his father was in the grocery industry. And legend has it that when he was 18 years old, he encountered a masa harina mill and thought it presented potentially a huge opportunity, took it back to his father and said, "I think there's really something here."

But consumers didn't agree. When GRUMA started selling Maseca in 1949, people in Mexico hated it.

Maseca didn't become the top-selling brand in Mexico because the Mexican people had a change of heart and decided they loved it. It came about through GRUMA's close relationship with the Mexican government.

Elizabeth Dunn: So originally, back through history, Mexicans typically made their own masa at home, entirely from corn grown in their own milpas, their own home gardens. And then, in the 20th century, there started to be mills where you could bring that corn to be ground. And then there were tortilla presses. And fast-forward the 1980s, there are tortilla shops and factories all over Mexico making tortillas supplied by Mexico's 3 million or so growers of corn, growers of maize. These are smallholder farmers. The Mexican government has a series of subsidies in place, at this point, where they are buying corn from those farmers at a high price and then selling it to these small tortilla shops, these tortilla factories at a lower price. And so the farmers get a living income and the tortillas remain cheap and everybody wins.

But then in 1988, Carlos Salinas De Gortari becomes president, and he is family friends with the founder of GRUMA, Roberto González Barrera. In 1990, the government says, "Well, we're going to move away from providing these tortilla shops with cheap corn. Instead, if you want a subsidized product, you're going to have to work with masa harina. You're going to have to work with this dried masa. If you want to keep buying corn, you're going to be on your own." And by the way, the only producers at this point of masa harina are GRUMA and the Mexican government.

So this is really a direct benefit to GRUMA. And GRUMA makes things easy for tortilla factories by giving them cheap or free equipment to make the conversion to masa harina. So GRUMA gets fat on government subsidies, and the tortilla shops that are continuing to use corn from local farmers really just can't compete on price, so hundreds go out of business. And like to put this in context, imagine if the French government decided to put a policy in place that would do away with baguettes and it was only going to be Wonder Bread from now on.

Alyshia Gálvez: NAFTA is the North American Free Trade Agreement, which took place January 1st, 1994. It's an agreement that links the economies of Canada, Mexico and the United States.

Mexico had an idea that to become a prosperous 21st century power that it needed to move away from subsistence agriculture. There was an idea that it was less efficient at growing food than at doing other things, and that if it could move into manufacturing, aeronautics, producing car parts, that it could become more prosperous more quickly than if it continued to have a subsistence agriculture-based economy. Which is kind of a strange calculus because it was really the countryside that powered Mexico's progress and prosperity in past decades and centuries, in fact. But this was the idea that was really driving their pursuit of NAFTA in the late '80s.

Unfortunately, this calculus was faulty in terms of the impact. Mexico ended up really displacing millions of people from the countryside fairly rapidly after NAFTA went into effect.

And the promised jobs that were supposed to open up in other sectors, didn't happen.

Alyshia Gálvez: And so we saw really just a boom of Mexican migration, as many as 1 in 10 Mexicans moving to the United States in the 10 year period after NAFTA. We also see just a massive displacement from the countryside where poverty instead of going down actually rises and a lot of people move to the cities, but not to be folded into a prosperous economy.

NAFTA wasn't actually designed for the prosperity of the general public, it was really designed as a wishlist for already prosperous elite sectors in each of the countries, already powerful corporations to really monopolize how globalization would occur. And it ended up negatively impacting the little guy. And in that, I include all of us who are part of the 99% in all three countries.

Plenty of other companies, aside from GRUMA, benefited from NAFTA.

Alyshia Gálvez: But there's really nothing, I think, so emblematic as GRUMA because GRUMA produces industrialized tortillas. And it's with NAFTA that we really see the most stark transformation of the Mexican diet. Centuries of colonization and conquest in which there was a continual assault on traditional Indigenous foodways had nothing, paled in comparison to what happened with NAFTA.

GRUMA, for its part, touts the speed, efficiency, affordability and consistency of its tortillas.

Gustavo Arellano: GRUMA's always going to claim that, "Look, we make it easier for people to make tortillas. We make a more uniform product. You can always count on us for consistency." And look, again, I'm not going to romanticize how people made tortillas in ye olden days, en los dias de anti pasado, because it was hard. But GRUMA products are inferior.

Do you really want to sacrifice taste and food stuff that connects you to the ancients that goes back thousands of years, all in the name of expediency and facility? Not me.

More: Did today's episode make you hungry? Find the works of those you heard on our masa show. You can also head to Masienda's website for their Masa Map, where you'll find a list of great masa spots around the country.

'Maíz is life' — the history, science, and politics of masa

Lend us your ears for a brief history and science lesson on corn.

Corn, water, and lime are the only ingredients needed to make tortillas — tell that to GRUMA

Making a good corn tortilla requires a mere three ingredients, still it can be an expensive and long endeavor. Enter GRUMA.

Masienda: In search of the perfect masa

Diversity in sourcing was top of mind as Jorge Gaviria set out to make the perfect masa.

Tamales may be a Christmas tradition but Indigenous culinary anthropologist Claudia Serrato reveals regional fillings used including iguana and deer.