In Residence: Rocky Dawuni uses music as a catalyst for social transformation Ghanaian artist Rocky Dawuni spreads positivity through his music and actions — something we certainly could use more of. The ‘Afro Roots’ sound he has crafted over his two-decades plus career bends sounds from Afrobeat, reggae, soul, as well as the traditional Ghanaian rhythms of Highlife, which he grew up absorbing.

Dawuni maintains a busy touring and recording schedule, while splitting his time between Ghana and Los Angeles. Part and parcel to Dawuni’s work is his activism and humanitarian efforts. Amongst many causes, he notably serves as an United Nations Environment Goodwill Ambassador for Africa — utilizing his platform to bring awareness to issues of poverty, environmental degradation, and women’s rights.

His 2019 album, “Beats of Zion,” melds global sounds with ease and invites a rhythm of change and cross-cultural unity. While quarantined in Ghana, he jumped into the studio to put some of his most recent tracks down for KCRW’s In Residence series. We check in with Rocky from Accra, where he details the history of that beautiful city, some of his social good projects, cultural similarities between Accra and LA, and his “deep belief in the power of music as a moral vessel to speak truth to power.”

Enjoy the global grooves of the session and read more from Rocky Dawuni below.

You recorded for KCRW from Ghana. Set the scene for us… tell us about the city you’re in, your musical history there, and the recording studio you used. Do you have a special connection to the studio?

Thank you very much. It was an honor to record this session from the heart of Ghana’s capital Accra. The suburb of the city where the studio is located is a bustling area called Kwashieman. Accra has long served as a cross cultural oasis for music from the West African sub region for countries such as Nigeria, Togo, Benin, and Cote d’Ivoire. It has always been a favorite stomping grounds for upcoming talent and musicians who are drawn and inspired by its bustling nightlife, cutting edge talent, and a lively music scene that has continued to thrive despite challenges over the years.

Renown artists such as Fela Kuti and Hugh Masekela, are some of the legendary names that spent a lot of time in Accra, working with musicians who were key to crafting their signature sounds. The city has also served as an epicenter for new and classic sounds that have influenced popular culture both within the continent and around the world. Music styles like Highlife, Azonto (now Afrobeats,) Hiplife and my personal Afro Roots style all launched from the city’s rich history of cultural innovation. My professional musical journey started here while I was a student at the University of Ghana. I played my first major concert and recorded many of my albums here. It is a true musical home for me.

For this recording I opted to do it at Kwashiebu Recording Studios operated by my good friend and keyboardist Kwame Yeboah (Pat Thomas, Ebo Taylor, Yusuf Islam, Craig David). The setting was ideal to get the band into one inspiring space and also to be able to get the best live sound and vibe with Kwame at the helm of affairs. The location also provided the opportunity to capture the ever-present vibrant energy of the city in our performance. Recent recordings by Highlife music legends like Pat Thomas and Ebo Taylor were recorded here. This location is within close proximity to the residences of Ghanaian highlife music greats like J.A. Adofo and the African Brothers band leader, Nana Kwame Ampadu. Working here at this space always feels special. This was the setting for the KCRW In Residence session — to capture the energy of Ghanaian music scene and my Afro Roots sound. 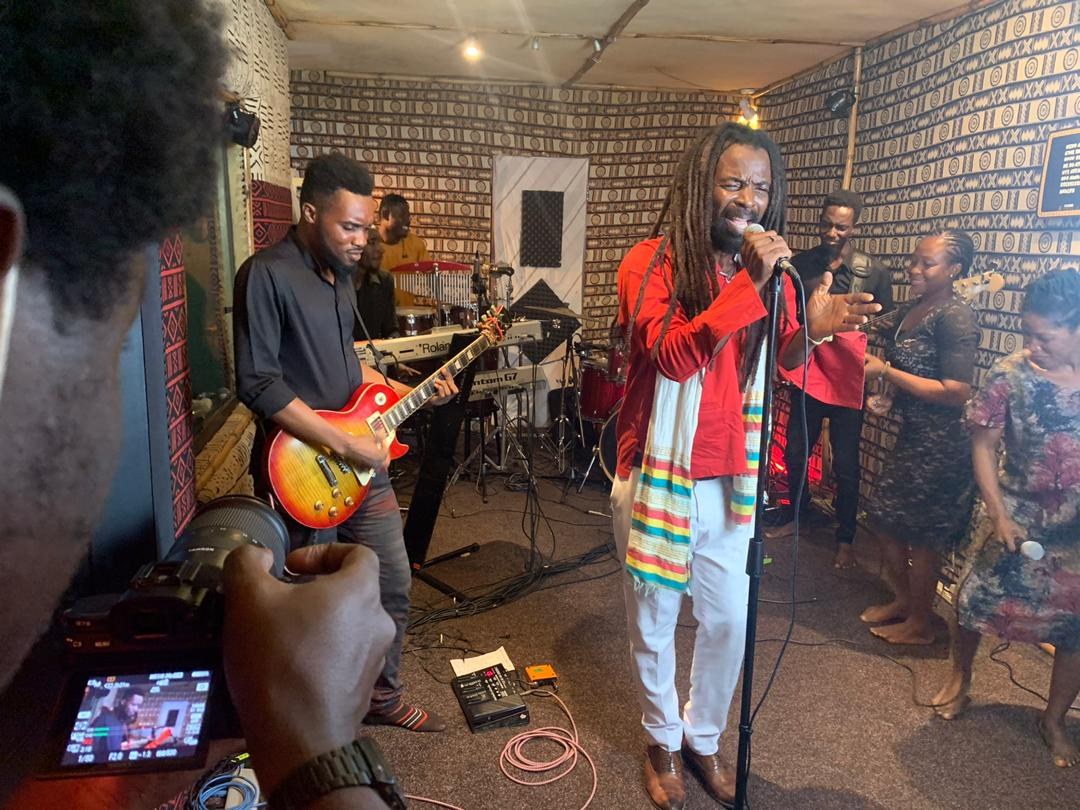 Related, you also spend time during the year in Los Angeles. Do you find any commonalities between the two musical scenes? Music is certainly a global conversation.

Definitely — the comparisons and connections between Accra & LA are strong as these two cultural capitals share a lot in common. My shuffling between these two worlds has also enriched my insights in observing the musical and cultural conversations that are constantly going on. Both musical scenes share a constant drive to be at the forefront of popular culture and serve as connection points for diverse talent. Technology and the explosion of social media have also accelerated access and sharing of new music and information which has resulted in lots of exchange between both worlds. Both cities also have a steady and exciting stream of international musicians, music festivals, and diverse clientele of music lovers and travelers from around the world who visit and constantly influence the scene.

Your music is so positive and impactful and you are a bright light with activism efforts in Ghana (and beyond). Tell us about a few of those projects that you’re working on right now.

Music is an essential catalyst for social transformation and in Africa it is more so. It is integral in all aspects of everyday life and culture. This has created an important platform for me to also engage my audience and the general population on initiatives that positively impact people and communities. I have been active in areas of youth empowerment, women’s empowerment, elevation of traditional culture and protection of the environment. I am currently the UN Goodwill Ambassador for Environment for Africa as well as a Global Ambassador for the Clean Cooking Alliance and a Global Ambassador for Born Free USA (an anti-poaching organization). I recently launched two tree planting initiatives in Ghana. The first is a 100,000-tree planting initiative with the Mayor of Accra and another 100,000 tree-planting initiative with my elder brother, the Chief of Bunbong in Northern Ghana. Another high-profile project is my recent acquisition of the legendary Bob Marley Tuff Gong Africa studios located in the Aburi mountains in Ghana. The studio, built by Rita Marley, was destroyed in a fire after its completion. I am in the process of working to rebuild it into a hub for culture, music, the arts, and activism.

What artists have influenced you and your sound the most?

I grew up on the sounds of Ghanaian Highlife music. My earliest influences were the African Brothers Band, Fela Kuti, Bob Marley, Bob Dylan, Curtis Mayfield, and later, Tupac Shakur. I come from a traditional household where cultural practices are part of everyday life so I was exposed to lots of traditional African music as well. My personal vision as a musician revolves around my deep belief in the power of music as a moral vessel to speak truth to power and to uphold the best in each other. I am also determined to constantly work on improving my musicianship and songwriting skills. These artists I feel embody those qualities.

When we get back to live performance — where do you look forward to playing the most and why? Could be a venue, a city, an outdoor space

One of my most memorable personal live experiences was playing at the Hollywood Bowl with Stevie Wonder. I will be delighted to play that venue once again to serve the people with the full force of the positive power of the Afro Roots sounds of Africa. 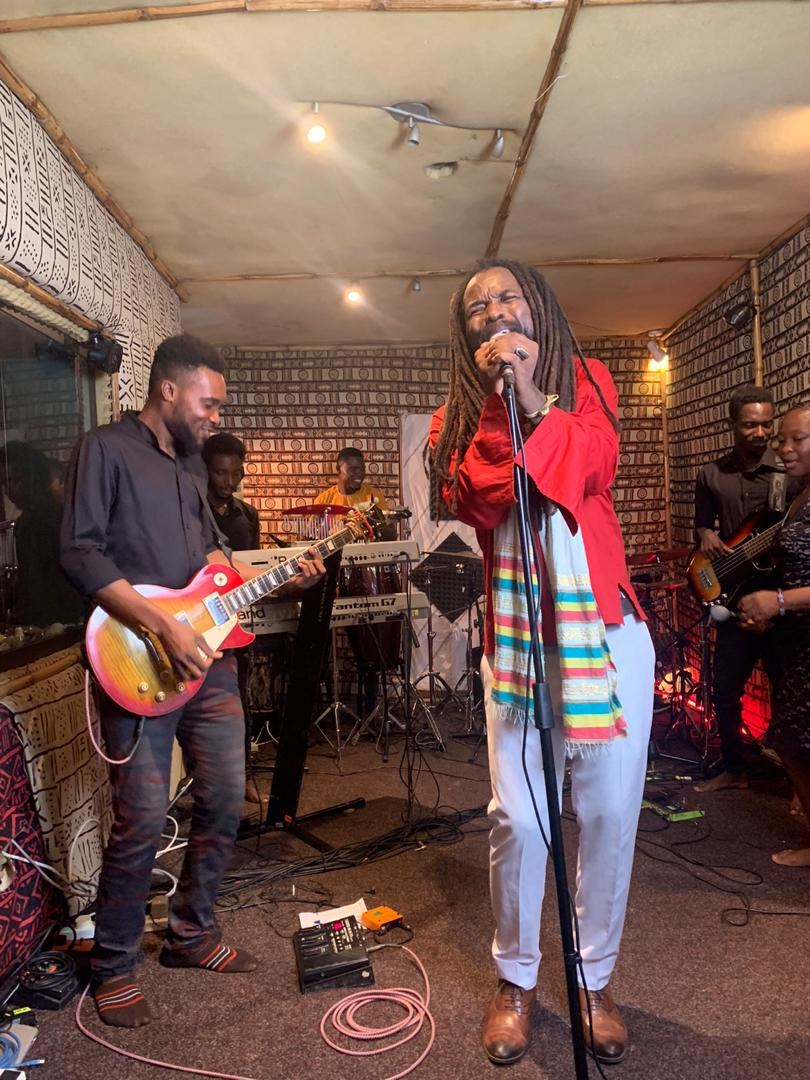 END_OF_DOCUMENT_TOKEN_TO_BE_REPLACED
KCRW’s Season of Giving Back – donate for essential journalism, music discovery, and arts and culture for all + be automatically entered to win a Private Screening of Guillermo Del Toro’s latest film for up to 40 friends + concessions!
GIVE NOW
Give Now