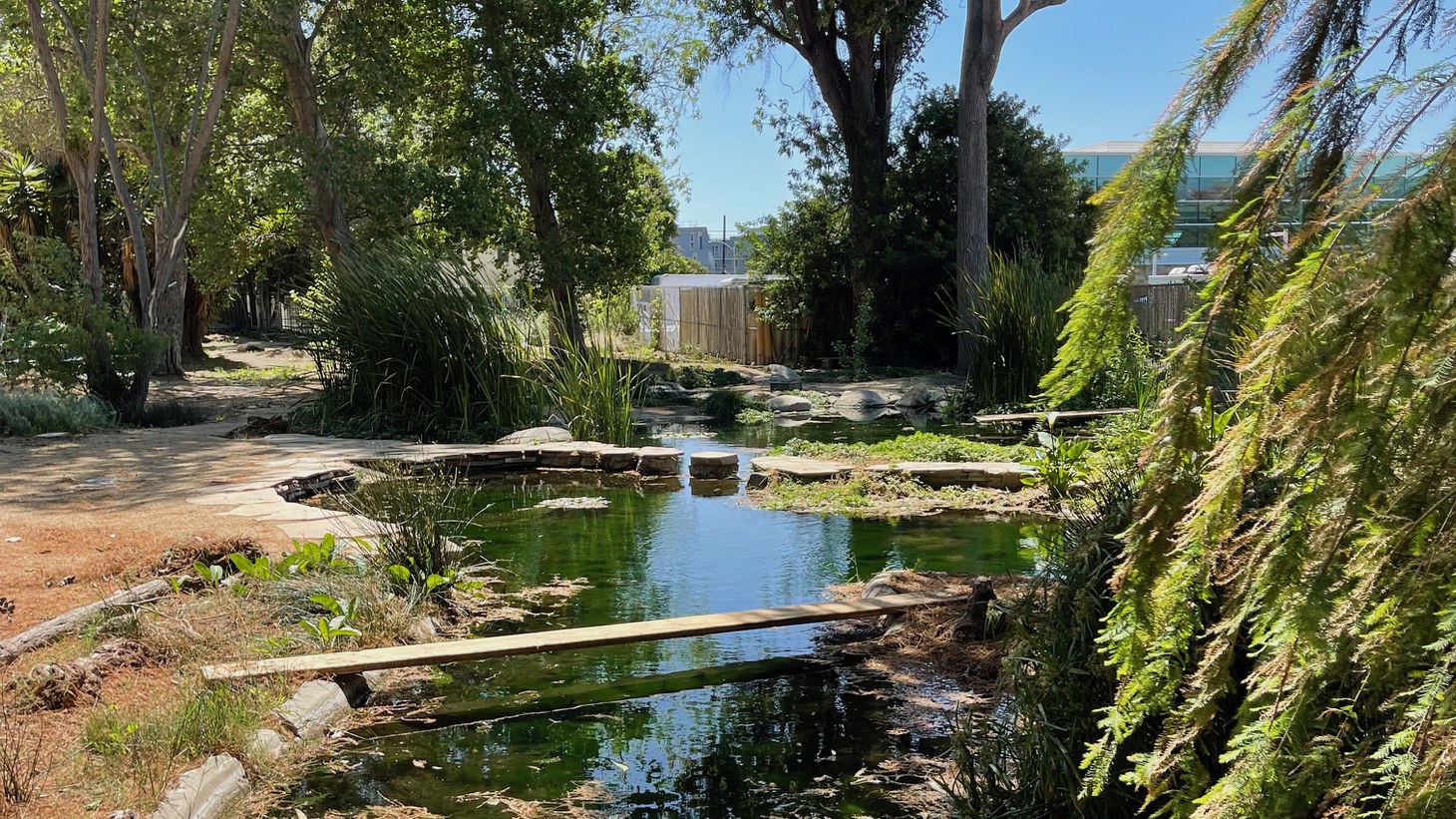 Natural spring water feeds this pond at the Gabrielino/Tongva Sacred Springs Foundation in West LA. It’s on the site of an ancient indigenous village called Kuruvungna. Photo by Frances Anderton.

Facing a decline in wilderness, flora, and fauna, more designers and land managers of LA’s public parks and private yards are replacing invasive plants with  native ones. Their goal: Restore the habitat that supports wildlife. 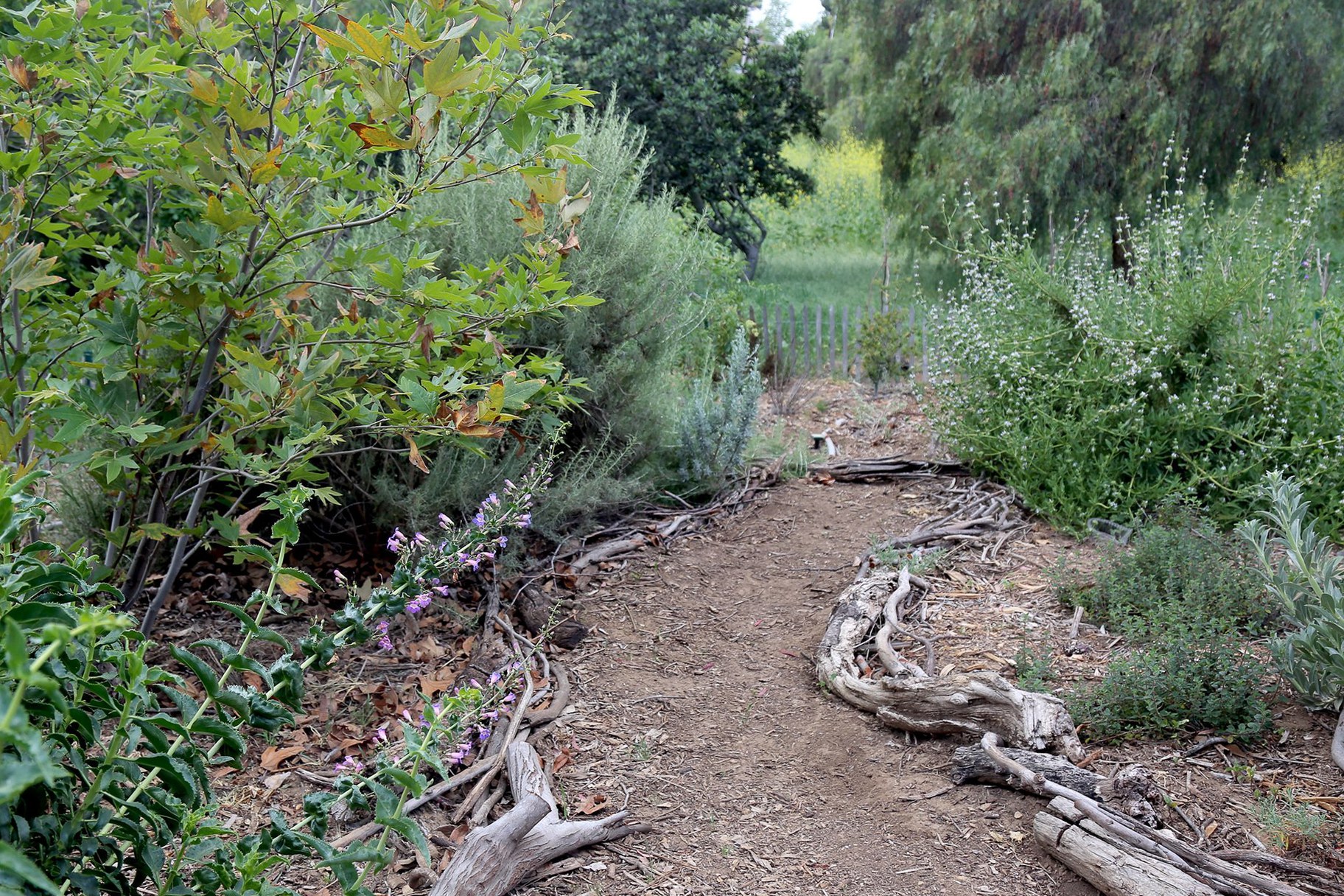 The test plot at Elysian Park has been planted with native shrubs like lemonade berry, artemisia, and black sage. Photo courtesy of Terremoto.

The term “rewilding” strictly means restoring an area of land to its natural uncultivated state, complete with megafauna or top predators. That has happened by historic accident in some parts of the world, such as Chernobyl and the Korean Demilitarized Zone (DMZ), the strip of land between North and South Korea where no one’s been allowed to go for more than 60 years.

But in recent decades, a growing number of people around the world have tried to do it intentionally, starting in the late 1960s in Holland when a large area of land was repopulated with wild animals. The movement has grown, and the term “rewilding” is now widely and flexibly used. In LA, it more commonly refers to managed yards – even very small areas like balconies – planted with a mix of native plants and non-invasive imports that attract the birds and bees. 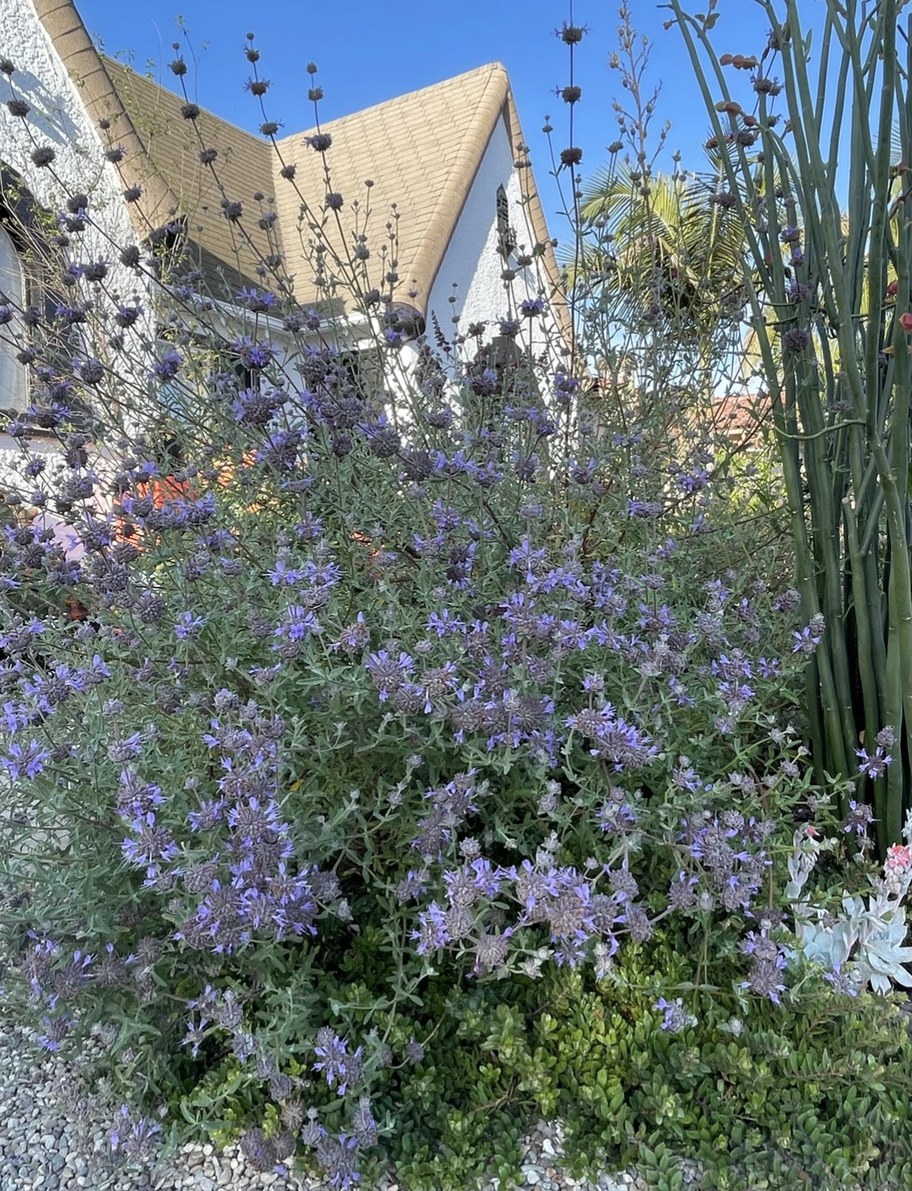 “What we're doing is experimenting with a more ecologically robust future,” says Godshall, whose firm has designed hundreds of private gardens and is working with a coalition of volunteers to create what they call “test plots” within public parks. These are small circles of land where they plant native shrubs such as lemonade berry, artemisia, or black sage, in the hope they can begin to propagate and compete with invasive species, like the vivid black mustard plants that spread wildly.

Godshall adds that if Angelenos were to create enough native gardens, we would arrive at what he calls a “patchwork ecology” – a network of islands of native plants near enough to each other that creatures can hop between them, rewilding the whole region. This approach dovetails with an LA City ordinance that is currently in development, which would urge homeowners to maintain pathways or corridors on their properties so essential wildlife can traverse the Southland. 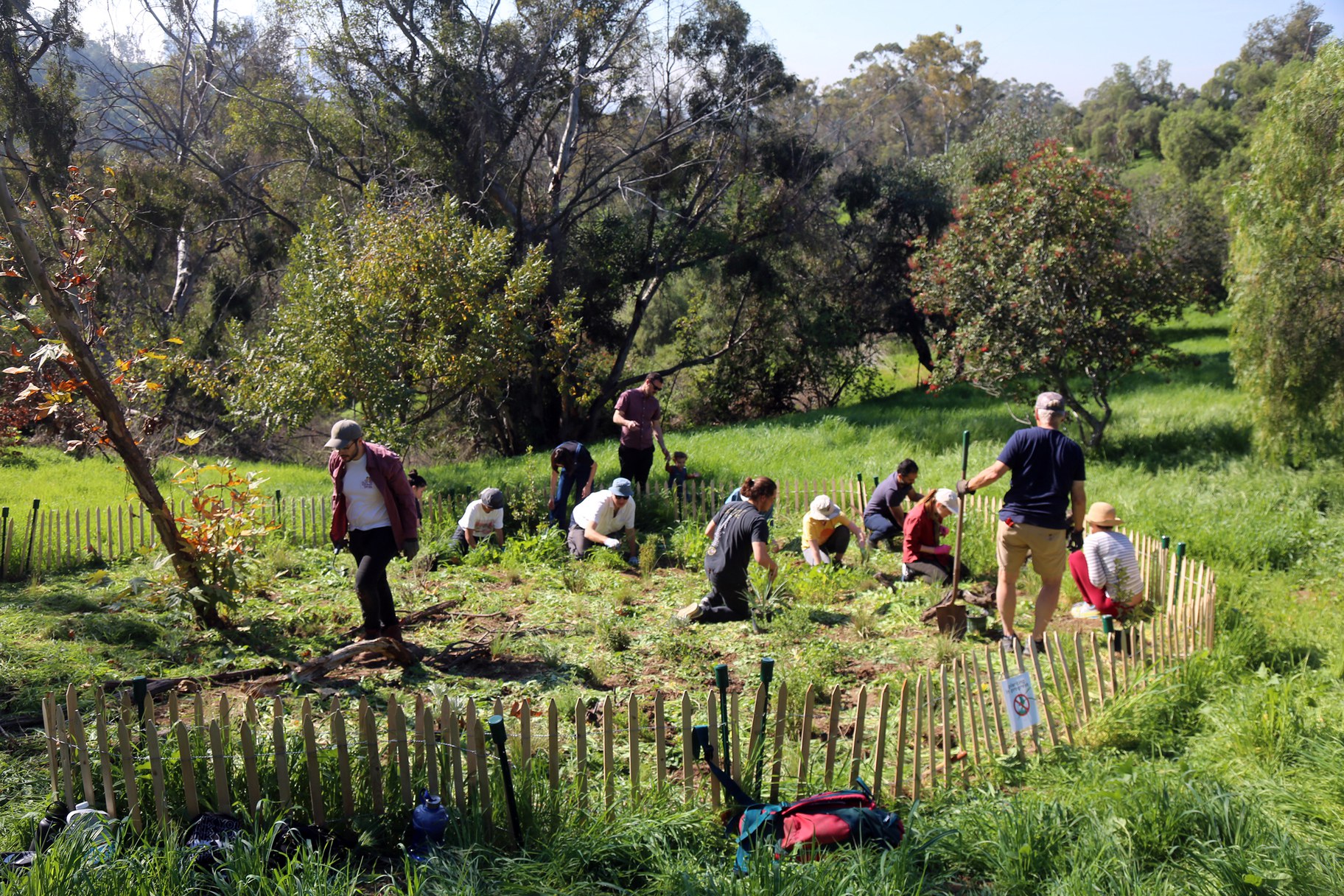 Volunteers create a test plot of native plants at Elysian Park, which has been overrun with invasive imports like black mustard. Photo courtesy of Terremoto.

All of this adds up to a very different landscaping strategy than one that was recommended during the last drought, when people raced to reduce their water use by installing drought-tolerant gardens or by getting rid of plants altogether and laying down gravel. Gravel saves water but can deter pollinators and other helpful bugs because often it’s laid over an impervious material called filter fabric to stop weeds from growing.

Yards filled with seemingly untamed shrubs in subtle gray-greens and lilacs can have a different appearance from the manicured lawns and bright imported flowers that we have become used to. In fact, neighbors have been known to complain about rewilded gardens that look too wild and untamed. But they have a distinct appeal of their own.

“I would start with smelling the plants,” says Jenny Jones, a partner with Terremoto. “These plants really are powerful – the smells, the flowers, the medicinal properties are way beyond the surface level beauty.” 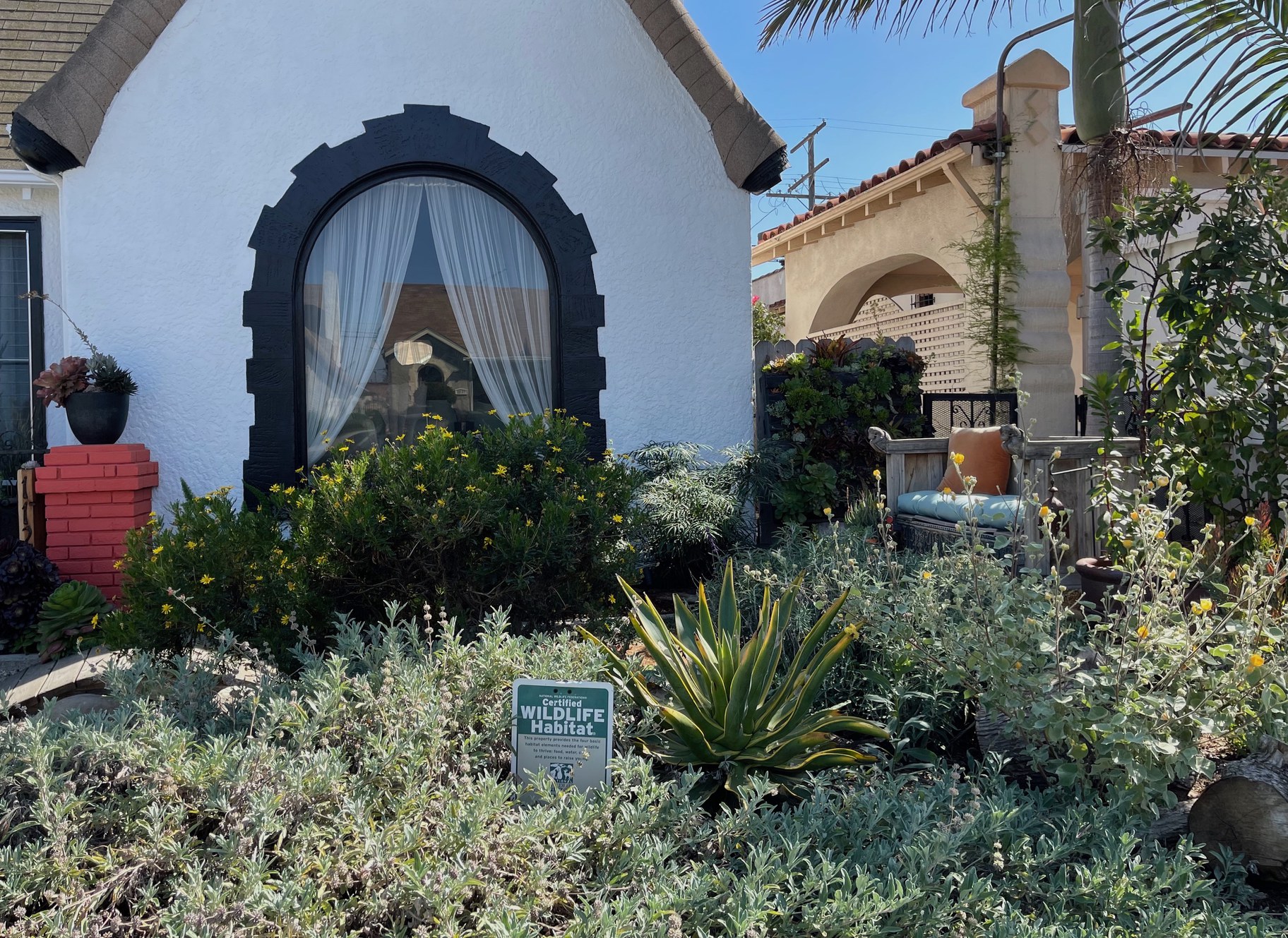 Brandy Williams’ front yard is a certified wildlife habitat and offers a different kind of beauty from the more manicured garden. Photo by Frances Anderton.

Brandy Williams concurs. She is a landscape designer and contractor and has a company called Garden Butterfly. The garden at her home in South Central Los Angeles is a mix of native plants and friendly non-natives. She has installed a fountain for the hummingbirds, arranged logs to make room for young creatures to nest, and planted shrubs to attract pollinators that also give off pungent aromas. “Not only is this a pollinator garden, but it's a sensory garden,” she says.

For Williams, rewilding is also a means to tap into her heritage. She was raised in Compton by her grandmother, who moved to Los Angeles as part of the Great Migration from the rural Jim Crow South. Williams says she learned from her grandmother a respect for the web of life, including insects. “My grandmother, she shared stories with me about her relationships with insects when she grew up in the South, being out in nature,” says Williams.

Williams purposely created her garden out front, not at the back, so it could be a social pollinator as well. She says her garden is a magnet for the neighbors. “Because when you're planning for pollinators in mind, like I've done here, there's so much color and texture. The neighbors, people who walk, they naturally want to talk.” 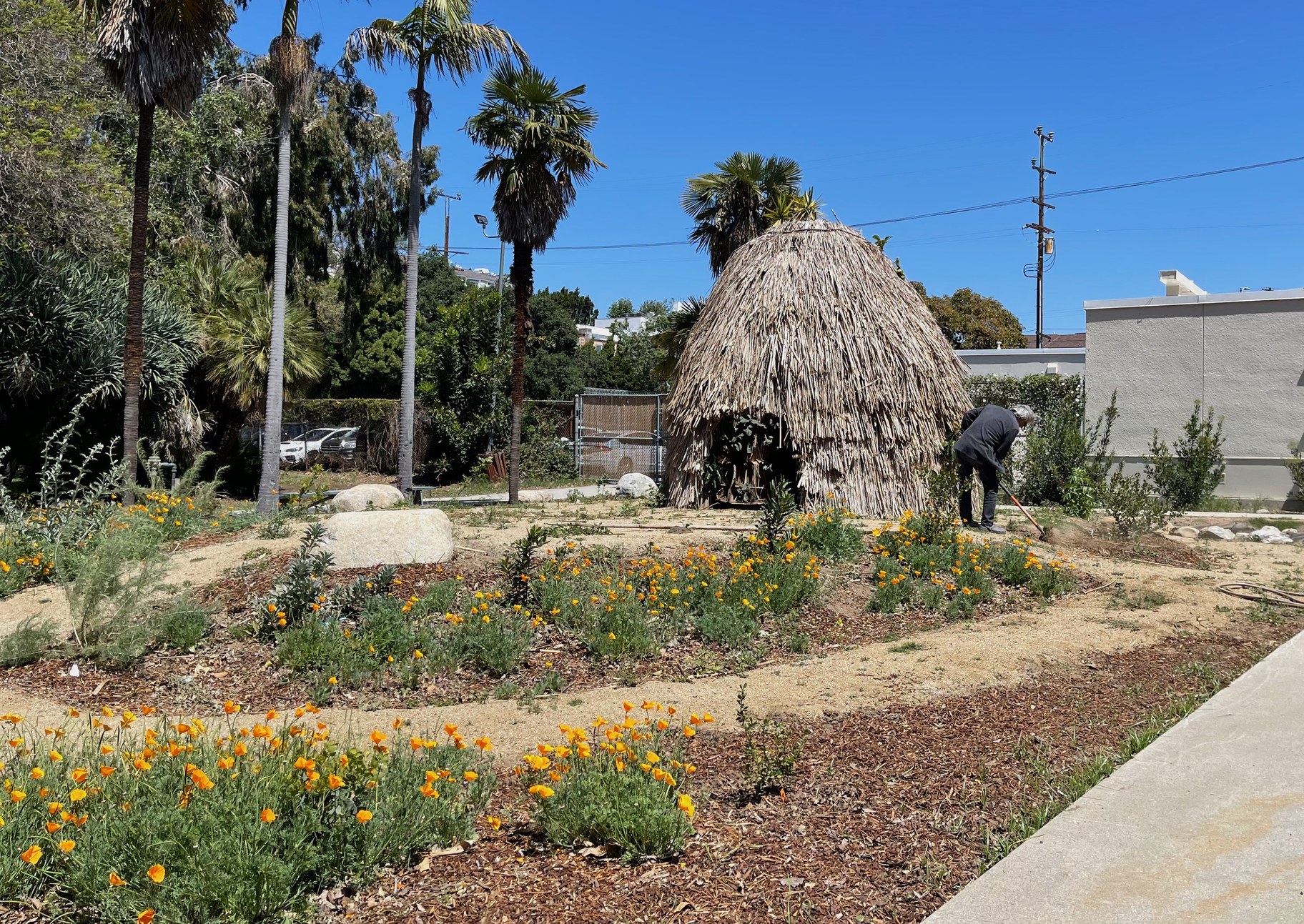 Bob Ramirez, president of the Gabrielino/Tongva Springs Foundation, weeds out invasive plants alongside a Kiiy, a Gabrieleno-Tongva house that Ramirez and volunteers have built to honor the site’s ancestors. Photo by Frances Anderton.

The notion that rewilding is connected to heritage and to community-building is abundantly clear at the Gabrielino/Tongva Sacred Springs Foundation in West LA. This two-acre piece of land – owned by LAUSD and tucked between an apartment building, University High School athletic field, and a parking lot – is the site of an ancient indigenous village called Kuruvungna. It is a restful site bursting with plants and a pond fed by natural spring water gushing from below, and shaded by the willowy bows of a large cypress tree. Ducks waddle in and out.

Bob Ramirez, president of the Gabrielino/Tongva Springs Foundation, says he is on a mission to honor his ancestors, share their history, and bring back the native plants and creatures that once made this their habitat. Ramirez points out the chub darting about, which he and volunteers restored after removing invasive crawfish. “The native plants are beautiful because they have adapted to live here,” says Ramirez. “They don't need irrigation. They don't need pesticides. They don't need fertilizers. They thrive in this climate zone. They provide the food and the flowers that the creatures need to pollinate and to survive.” 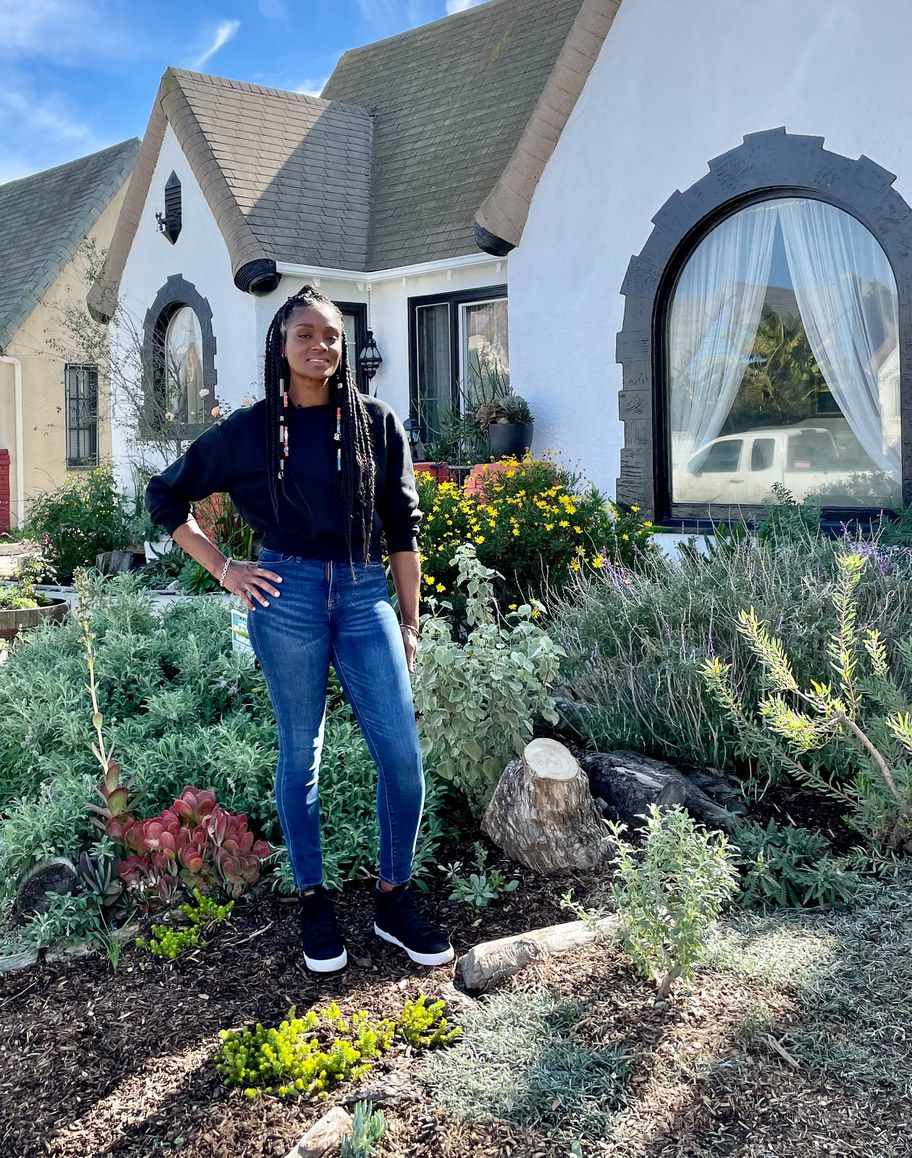 You can see native plant gardens and meet their designers this weekend.

The Theodore Payne Foundation, which collects and sells native plants, is hosting a tour of native gardens across the basin, taking place this weekend, April 23 and 24. Gardens by David Godshall and Brandy Williams, of Garden Butterfly, will be on the tour.

David Godshall will speak about rewilding at Helms Bakery District at Seeding The City, a free public event this Saturday, April 23. Leading landscape designers and thinkers will show how to green the 21st century metropolis. Godshall will bring native plants for viewing and purchase.

The Gabrielino/Tongva Springs Foundation is open to the public the first Saturday of each month. Bob Ramirez invites volunteers to help pull out weeds and invasive critters, clean out the pond, and participate in rewilding.