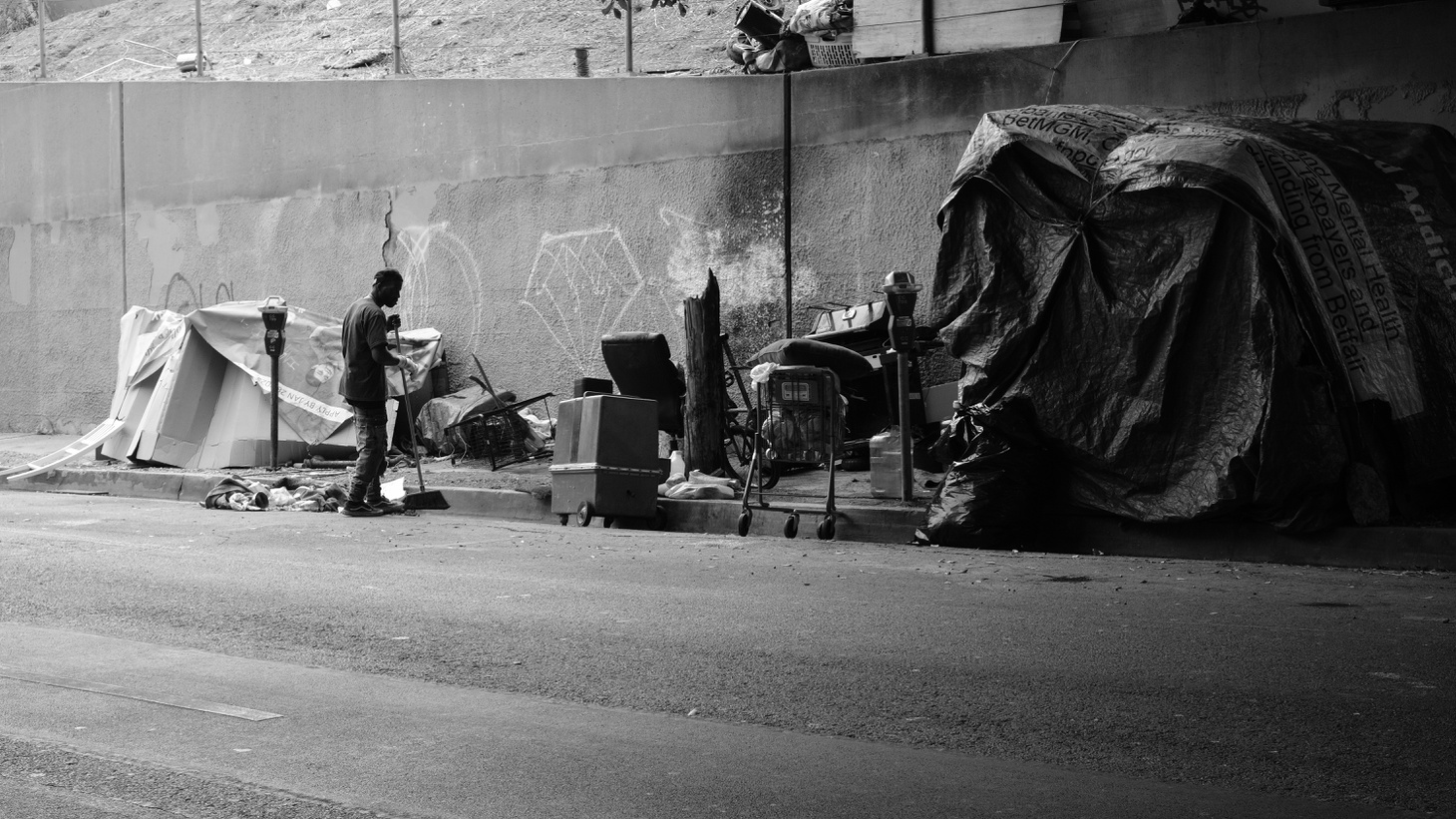 A homeless encampment is seen in downtown LA, October 14, 2022. This year, in the worst winter weather, the Los Angeles Homeless Service Authority will provide just over 600 extra shelter beds to serve the nearly 50,000 Angelenos who sleep on the streets every night. Photo by Amy Ta.

A few feet from the busy 110 freeway in Highland Park, Alfred Moody sits in a wheelchair near a charred fire pit that he and a few friends use to stay warm. It’s been chilly lately, and at the moment, he doesn’t have a tent. As the nights get colder, Moody says he’ll have to seek some other kind of shelter because temperature drops trigger his seizures.

“[I’ll] probably sleep in abandoned cars … my plan is to figure out how to get out [of] the cold. Because it's no joke,” says Moody. “It eats people alive.”

Christopher Holgiuin, who sleeps outside near Lincoln Park, says the trick is to bundle up with layers of clothes and blankets. Sometimes he tries to find bricks or stones so he can make a small, safe fire to warm his hands and body. Otherwise, he says he wakes up feeling like a “popsicle stick.”

​​”You'll just be in horrible pain, it's really bad,” he says. “And, yeah, I can see how people pass away like that.”

Last year alone, the coroner's office reported 14 deaths from cold exposure on LA sidewalks. And chilly temperatures can trigger other life-altering medical issues, like pneumonia or the loss of limbs.

But for the nearly 50,000 Angelenos who sleep unsheltered every night, finding ways to stay warm can be exhausting — most shelters have long wait lists, and warm-weather supplies like sleeping bags are frequently tossed out in encampment sweeps.

But while that program used to offer more than 1,000 extra beds annually, it shrank over the course of the pandemic. And this year, officials have changed it completely: They’re cutting down on fixed shelters in order to offer about 500 motel vouchers countywide on particularly cold or rainy nights.

That doesn’t mean 500 people per night are sleeping in motels who would otherwise have been out in the cold.

For one thing, LAHSA said they have offered the emergency motel vouchers just four times so far this year. Per the agency’s guidelines, the vouchers become active when the forecast calls for certain weather conditions, like below-freezing wind chill temperatures for three consecutive nights, an inch of rain in 24 hours, or weather that is both rainy and cold.

In two of the instances the vouchers were activated, they were only available in the very coldest parts of the county, like the high desert and the foothills.

Another problem: Only 16 motels in LA are even accepting them.

After talking to half a dozen unhoused Angelenos for this story, only one had even heard of the program. In fact, LAHSA says that so far, they are seeing about 30 or 40 being used during activations — a fraction of the more than 500 that are supposed to be available countywide.

Malikye Pireu, 25, is staying at an emergency winter shelter in Manchester Park. He says that at one point during a recent rainstorm, he was offered one of those new motel vouchers. But there was a catch: The closest motel that would accept it was about 15 miles from where he was staying — and he’d have to ditch his belongings to take the rideshare offered by 211.

“I had no way to get them all there, I had no car, no way to walk five hours,” says Pireu. “So I had to call and tell them I couldn't go.”

Andreina Kniss volunteers for the mutual aid group Ktown For All, which distributes supplies to unhoused people in Koreatown. She says she hasn’t heard of anyone she works with receiving a voucher.

“There's not a lot of advertising about it,” says Kniss. “We've had to dive in and seek out this information. And if a person is living on the sidewalk in a tent, I can't imagine they would have any more capacity to look this up.”

Officials say they hope the program will be used more as their outreach continues.

Emily Andrade, LAHSA’s interim housing director, says the shift to motel rooms is meant to direct limited resources to where they are needed most.

“We just want to be able to support having the ability to mobilize motel vouchers when there's an emergency in one area of the city or county, rather than having to utilize the entirety of the resources,” she says.

The vouchers mostly replace the old system of congregate shelters, which saw some beds going unused during the pandemic. There are only 107 of those fixed beds available this year, which will remain open for the entire season.

Andrade says that during the COVID emergency, officials realized that what most people experiencing homelessness really want is their own space, not group shelters. Programs that offered motel vouchers to unhoused people saw greater success.

She notes that the total number of winter beds has been impacted by staffing shortages, and challenges with leasing adequate spaces — particularly as the agency builds more year-round shelters citywide.

So, this year in the worst weather, just over 600 extra beds will serve the nearly 50,000 Angelenos who sleep unsheltered every night.

According to LAHSA, the four fixed shelters located in Lancaster, South LA, Whitter, and Mid-City have seen a lot of traffic so far this year, operating near or at capacity since they opened earlier this month.

But because there are so few — and they’re so far-flung — they can be difficult to reach for many unhoused Angelenos. And some who can get a bed say that strict rules make it easy to get kicked back out into the cold.

The South LA shelter, run by the non-profit Home at Last, is the largest of the four. It operates out of an unmarked black and gray building in Manchester Square.

On a recent evening, 22-year-old Asuna Riddle sat bundled up in red Christmas pajama pants and blankets outside the shelter’s front door. As the sun sank below the horizon and temperatures began to drop, she explained how she’d checked in after weeks of sleeping in Santa Monica during a recent bout of rain.

“I barely got through the night, so I don't know how I did it. It's like I slept through the rain too, and that's another thing — to go to sleep dry and to wake up soaked wet,” she said.

Riddle made a nearly two-hour bus journey to secure a spot here. Once she arrived, shelter staffers gave her a bed in the men’s section, which — as a transgender woman — made her feel unsafe. But at least it was warm.

However, after a shelter security guard found her holding an unopened beer can — which she says was not hers — she was promptly tossed out.

“He literally grabbed me by the hair and started dragging me like a rag doll to go outside,” says Riddle.

Alcohol is often banned at shelters – ruling out many of the unhoused Angelenos who struggle with substance abuse disorders.

Riddle said she did want to return to the shelter, despite what had transpired. But she’d been waiting outside for nearly 15 hours for a supervisor to decide if she’d be allowed to. The shelter would not let her inside to store her things, or even to use the bathroom.

Riddle said she was eventually allowed back in — but only after another night of sleeping outside. Meanwhile, the majority of unhoused Angelenos find other ways to stay warm.

Andreina Kniss with Ktown for All says that the organization is most concerned now with passing out sleeping bags and tents, which she says repeatedly get thrown out in sanitation sweeps.

“We're giving them to people and the city is just throwing them away every week,” says Kniss. “And we're just giving them out again, so that people don't die. Because otherwise, they're out in the cold with nothing.”

LAHSA’s “reimagined” winter shelter program provides both beds and motel vouchers to unhoused Angelenos looking to stay warm. But fewer beds are being offered than in years...

Photographer Lev Rukhin moved to LA in 2010 and started shooting its street scenes from an old Volvo station wagon as a way to engage and spend time with his daughter....