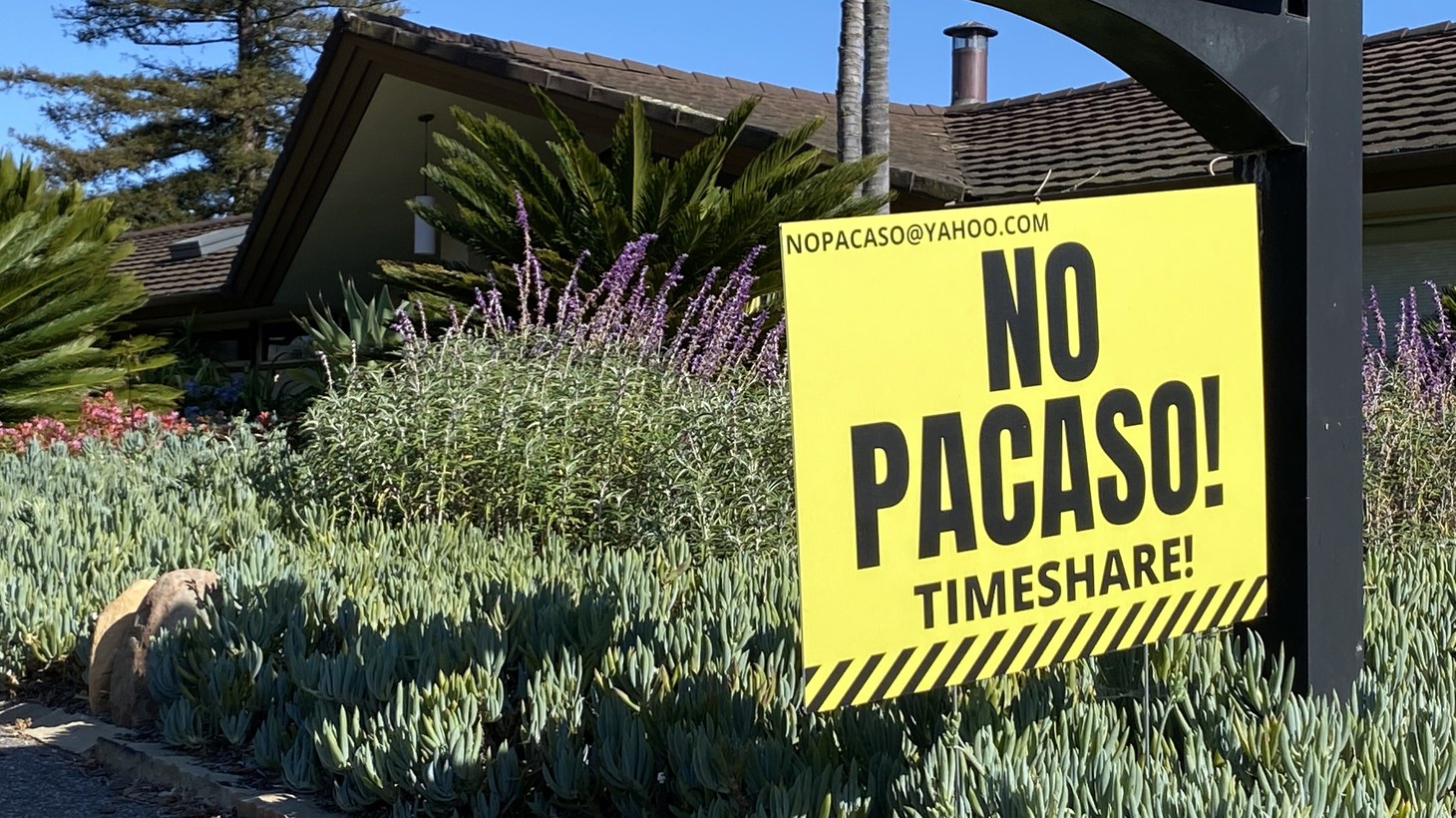 Bright yellow signs declare opposition to real estate startup Pacaso in Santa Barbara, one of many California communities wrestling with how to regulate the company. Photo by Matt Guilhem / KCRW.

When a home recently sold in Santa Barbara’s hillside Riviera neighborhood, resident Don Vogt was naturally curious to meet his new neighbor, so he walked down to introduce himself. But instead of a homeowner and a moving van, he found a “bouncy young lady who said, ‘Oh no, you’re going to have eight neighbors!’” Vogt recalls. “And I said, ‘What?’ And she said, ‘Yes, it’s been bought by a company called Pacaso,’ and I’m thinking of the artist, and she says, ‘No, it P-a-c-a-s-o. They buy the house and then sell ownership parcels to as many as eight other people.”

Vogt was taken aback. “That didn’t sit well,” he says, “because it sounded an awful lot like a timeshare right in our backyard here.”

Is it a timeshare? Pacaso sells up to eight separate slices of ownership in a luxury vacation home, manages the property, and schedules limited-time stays for those buyers. The company calls this “fractional ownership” and has asserted forcefully that they are not a timeshare. Yet municipalities from Maui to Long Island, including Santa Barbara, Palm Springs, and other charming Southern California towns where Pacaso has started buying property, aren’t so sure, and they’re experimenting with an array of regulations to rein in the real estate startup while letting the free market do its thing.

“‘Fractional ownership,’ to me, is just a euphemism for ‘timeshare,’” says Santa Barbara City Councilwoman Kristen Sneddon, who represents the Riviera neighborhood where Don Vogt lives. “It just means that you have more of a share to control.”

Like many cities in California, Santa Barbara doesn’t allow timeshares in residential neighborhoods. The regular churn of people – the coming and going – doesn’t fit with the zoned use of the area, Sneddon says, nor does a professionally managed commercial venture.

Plus, Sneddon says buying up single-family homes, even luxury properties, raises another issue: Precious housing resources are being spent on people’s second homes. “We’re about 8,000 units short of where we need to be for people who already work in this city, so we don’t have enough housing for the people who are here,” she says.

As Santa Barbara’s legal team explores the city’s regulatory options, they’re keeping a close eye on some other communities that’ve already taken decisive action when it comes to Pacaso, which was founded in late 2020 by former Zillow execs. Carmel, South Lake Tahoe, and Palm Springs have each sent cease and desist notices to the company. All of the cities assert Pacaso is violating their timeshare ordinances. Palm Springs also worries the homes could be neighborhood disruptors like short-term rentals. 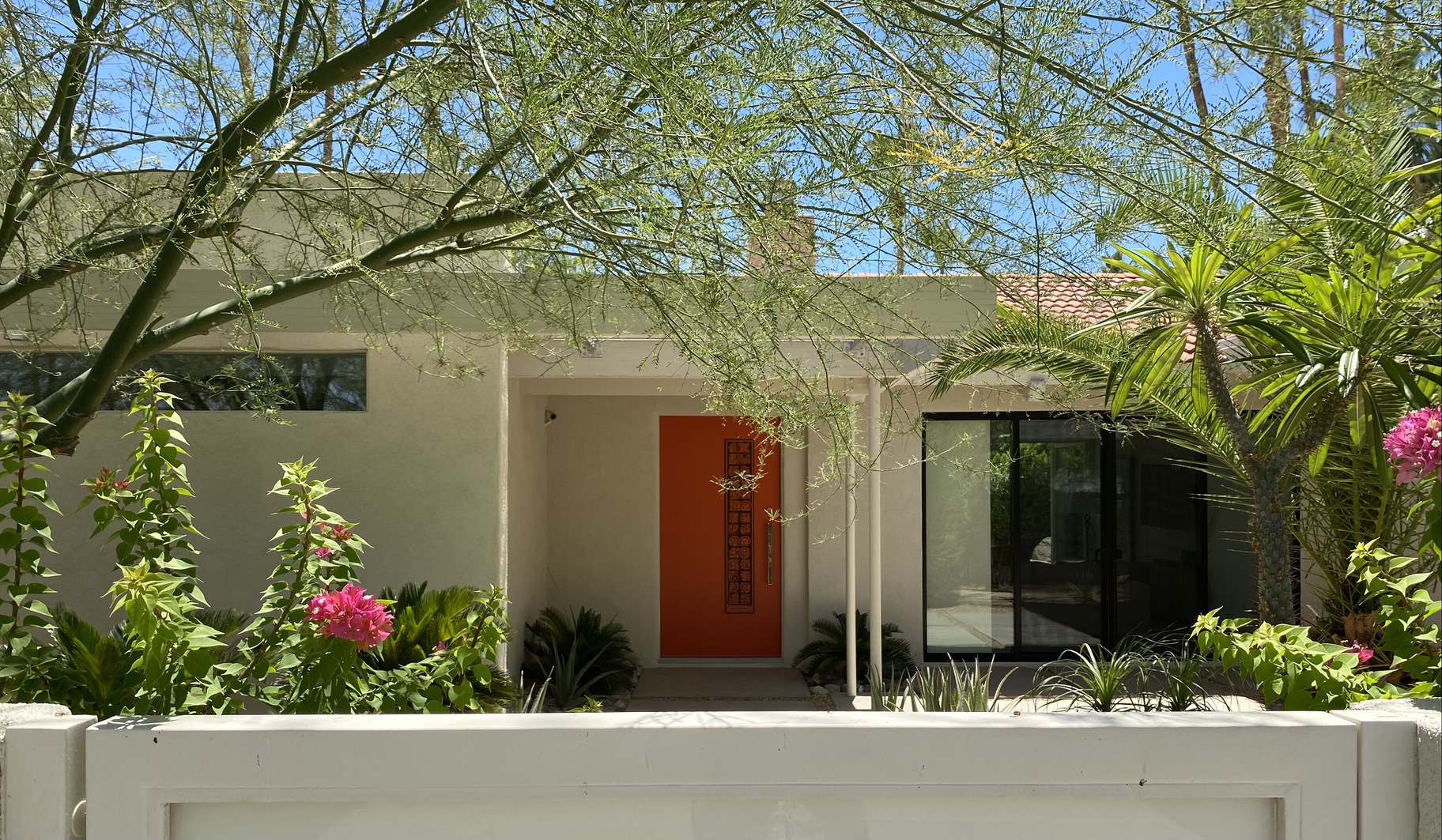 With its bright door, flat roof, and clerestory windows, this Pacaso home in Palm Springs could be owned by up to eight buyers. Photo by Matt Guilhem / KCRW.

“The biggest concern among residents is it will expand that activity that walks and talks and looks like a vacation rental property,” says outgoing Palm Springs City Manager Justin Clifton. “In other words, the owners aren’t in the middle of their regular daily lives, either as working individuals or maybe retired at home enjoying a peaceful, quiet neighborhood, but are rather in a more vacation mode.”

Whether it’s Clifton in Palm Springs getting vacation rental heartburn thinking about the company, or Kristen Sneddon in Santa Barbara casting her lot with team timeshare, Pacaso’s chief marketing officer, Whitney Curry, is adamant the homes are neither timeshares nor vacation rentals.

“Pacaso is co-ownership,” Curry says. “Co-ownership is real estate property ownership. So when you own a timeshare, you do not actually own real estate, instead you own the right to use time at a property. Pacaso owners own real estate just as if you’re going about purchasing a whole home.”

Furthermore, she says, the argument that Pacaso takes needed homes off the market holds no water in towns filled with second homes that sit empty for part of the year. In fact, she says it’s the opposite: “Pacaso is creating added inventory. By consolidating demand, multiple families can purchase one home together and use that home consistently all throughout the year.” 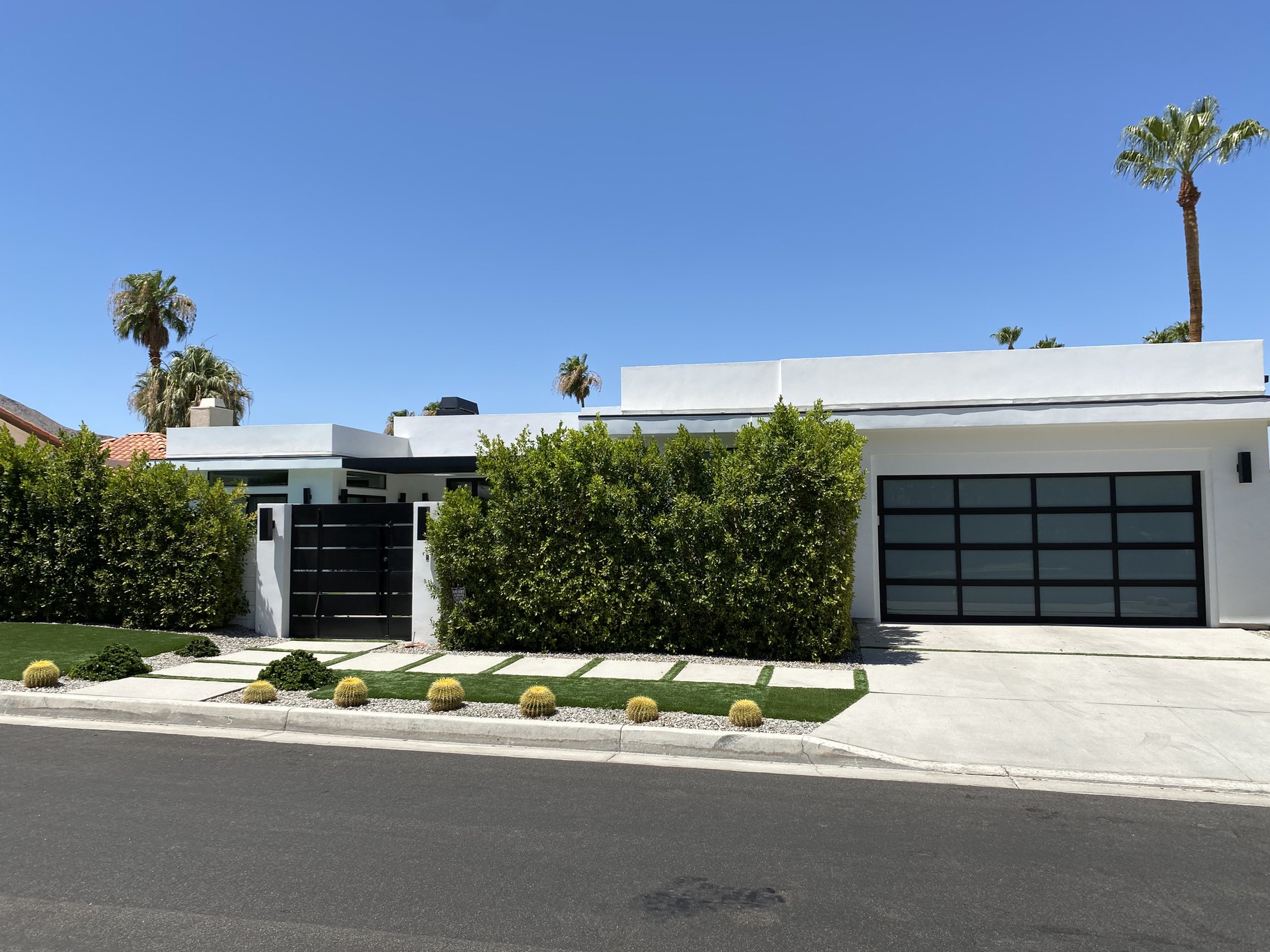 Several Pacaso houses in south Palm Desert are all clustered near each other and are just a few minutes from the El Paseo shopping district. Photo by Matt Guihem / KCRW.

Pacaso owners agree. Colorado resident David Durham is one of the fractional owners of a Pacaso house in Palm Desert. He called in to a recent Palm Desert City Council meeting when regulating the company was on the agenda. He said his family has been visiting the Coachella Valley for years, but since he’s still not quite ready to retire, going all-in on a home in Palm Desert isn’t on the table yet.

“So Pacaso was a great way for us to have an ownership stake in a great house, let Pacaso maintain it, and share it with other people who have a vested interest financially to take care of the property,” said Durham. “It is not a timeshare. We are a one-eighth owner in an LLC.”

Another fractional owner called in and made a point Pacaso highlights in an economic study it commissioned – they’re not pinching pennies when they come to town.

“I spent $600 at your beautiful Sundance store on El Paseo,” said Jill Muller, a Pacaso owner in Palm Desert who also lives in Colorado. “We also went to many restaurants there. I mean, we’re just bringing in thousands of dollars to your community between groceries, food, golf.”

Ultimately, the comments did little to sway local leaders. Palm Desert City Councilwoman Kathleen Kelly summed it up: “To the average person, it waddles like a timeshare, it quacks like a timeshare, therefore I think it’s entirely appropriate for the city’s regulatory response to pull the Pacaso model of ownership into the timeshare ordinance,” she said.

“We’re working with the communities collaboratively to engage in dialogue and are very open to having a discussion around a reasonable regulatory framework that can address co-owned housing,” Curry says.

Officials in the desert say talks are happening, and that while they proceed, the company is holding off on buying new homes in their communities.

As Pacaso, the cities, and an army of lawyers iron out the definition of a timeshare, back in Santa Barbara, Don Vogt is taking action from his hilltop. He’s joined up with an outfit based in Sonoma County called Stop Pacaso Now and has taken the lead on a signage campaign. 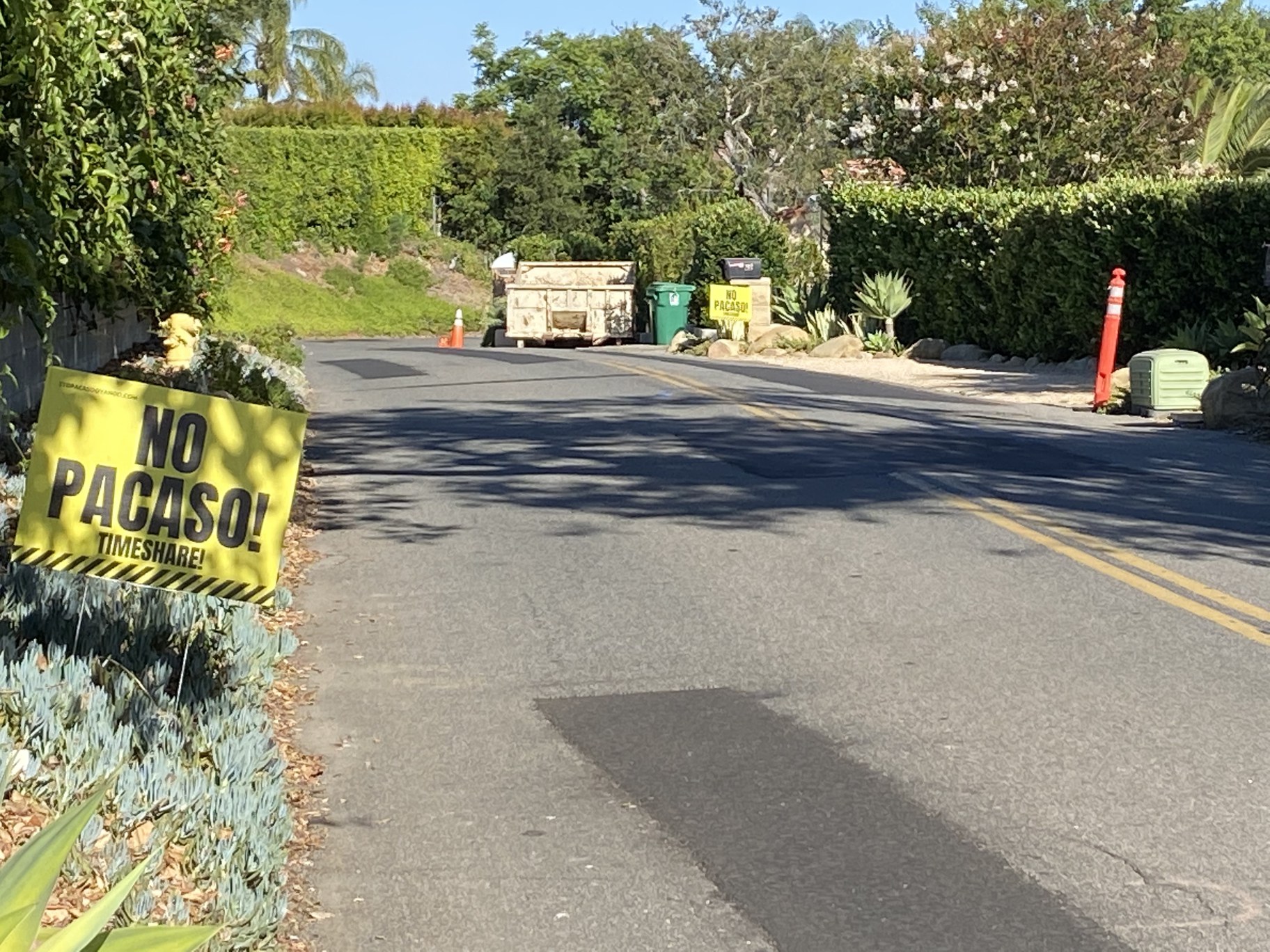 “You’ve seen my ‘No Pacaso!’ signs out here,” he says firmly. “They’re popping up everywhere. You want one?”

He chuckles while making the offer, but enough residents in the neighborhood already have the bright yellow placards out front that when whoever lives in the fractionally-owned Riviera home drives up, they’re definitely seeing the “No Pacaso!” sign.