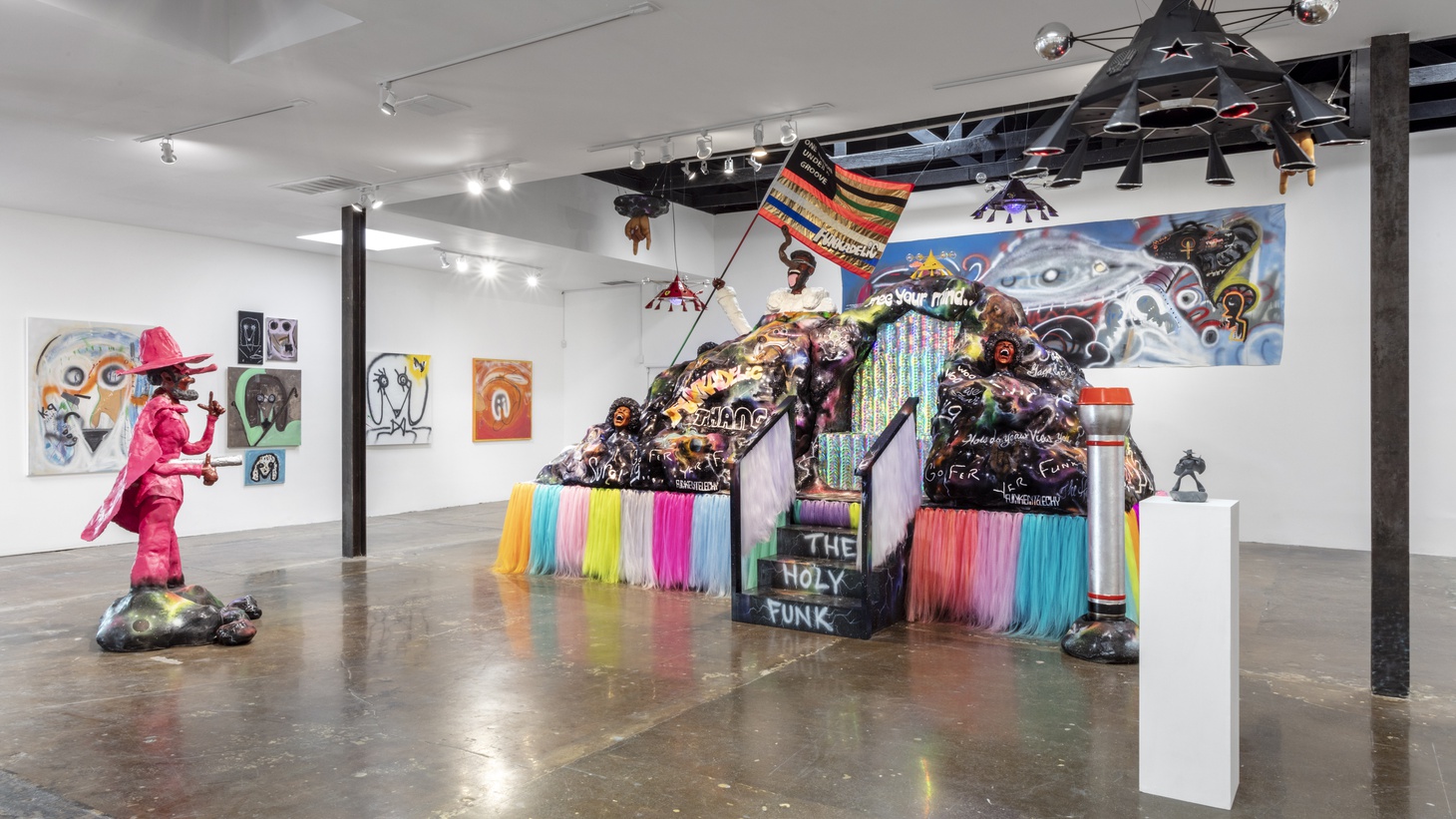 George Clinton, the famed frontman of Parliament Funkadelic, is known for creating a psychedelic, sci-fi universe through his music. Songs like Mothership Connection transport listeners to faraway galaxies of pharaohs, UFOs, and glittery leather jumpsuits.

Now the master of funk is out with a new exhibition of his visual art entitled The Rhythm of Vision, which channels similar themes and influences. It’s on view now through January 14, 2023, at Jeffrey Deitch gallery.

“He's really developed this visual language, which you see a lot of in his music and album art as well, these characters coming to life,” remarks art critic Lindsay Preston Zappas. “He realized that he could almost approach art with the same kind of open-ended world-building that he does in his music.”

The exhibition coincides with the 40th anniversary of Clinton’s famous song Atomic Dog. Zappas describes how Clinton features canine motifs throughout his artwork.

“Across the paintings in the show, you see this dog cartoon repeated. In some of the paintings, you'll see a simple spray-painted outline. In others, a dog shape becomes filled with collage elements. In some, it's almost as if that triangular dog head morphs into an alien head … or it becomes a UFO.”

No stranger to bold statements in his music or costuming, Clinton incorporates this sensibility into his visual work. “His music is so theatrical,” says Zappas. “I think his paintings … feel improvisational and layered. And some of them become narrative as well.”

In addition to Clinton’s own work, the exhibition features a custom-built stage from artist and self-proclaimed “Funkateer/afronaut” Lauren Halsey.

Zappas describes the technicolor stage: “[It has a] built-up mound that’s spraypainted to look like the cosmos. There's a throne made out of shiny CDs. There're figures emerging from this cosmic mound, and there are these spaceships floating above, hands coming down from the clouds.”

As part of a gallery activation, Clinton performed spoken word poetry with a backing band shortly after the exhibition’s opening. But as it turns out, this wasn’t the first time he played music in the building.

According to Zappas, “The building actually used to be a recording studio called Radio Recorders, and Clinton has recorded several of his songs in that space over the years.” The venue provides a fitting landing zone for this intergalactic pioneer.