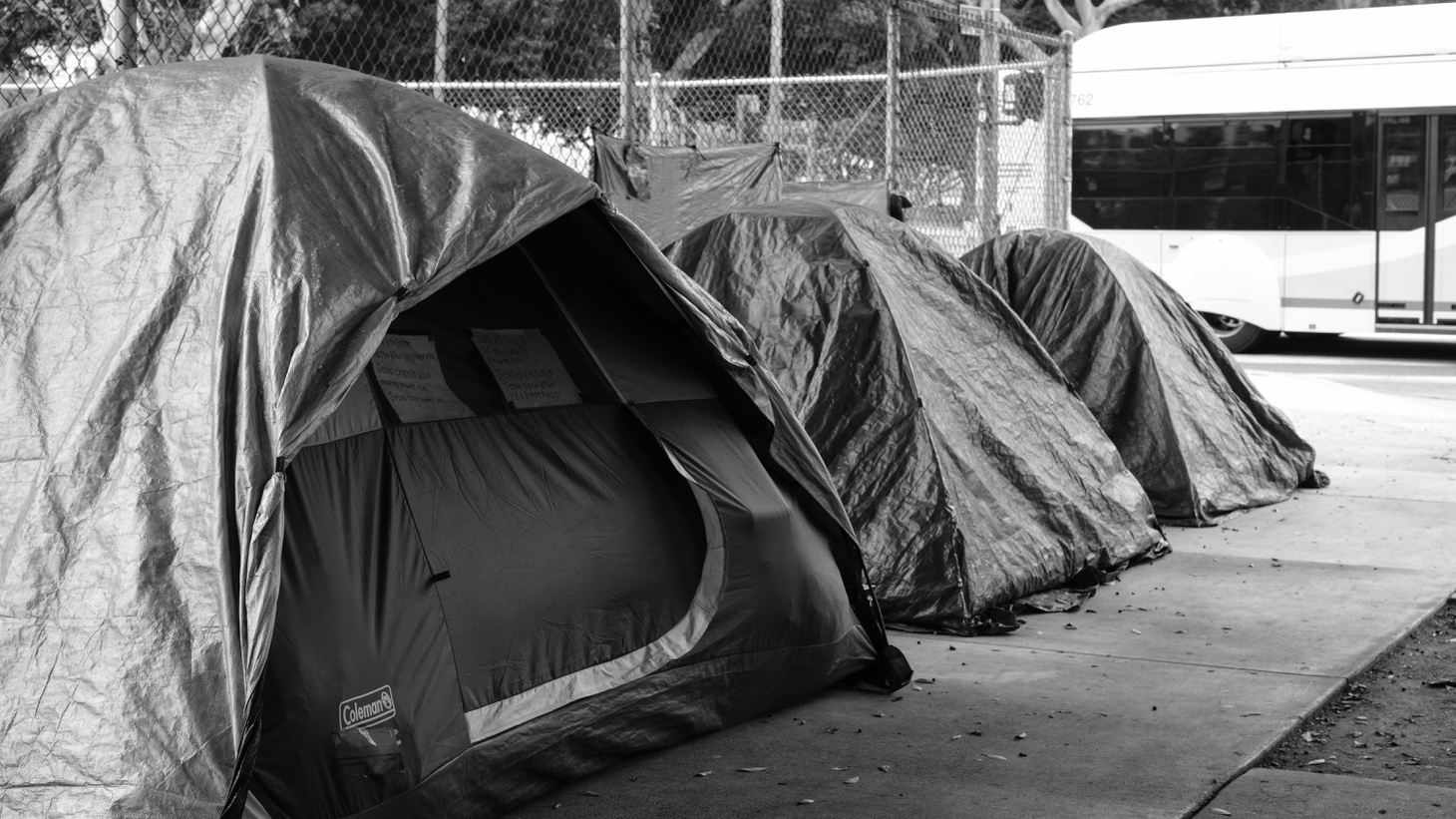 A bus drives by three homeless tents that are lined up near LA City Hall. Last year’s count found that more than 69,000 people were living in tents, shelters, cars, and on the streets in Los Angeles County. Photo by Amy Ta.

LA’s annual homeless count kicks off tonight and runs through Thursday as thousands of volunteers tally up how many Angelenos are living without adequate shelter. The data they collect will help determine how precious resources are distributed. But how good is this annual exercise at actually telling us how many Angelenos are homeless?

Even the Los Angeles Homeless Services Authority (LAHSA) — which runs the count and found 69,000 people experiencing homelessness in LA County in 2022 — admits it’s been less-than-accurate in recent years. That’s why they’re making some changes.

The biggest change is a new phone app that volunteers will use to count people in the field this year. During the 2022 count, volunteers reported glitches and connectivity issues with LAHSA’s previous app, which resulted in questionable results in some areas.

That year, zero people were recorded at a location in Venice that was a well-known gathering spot for people experiencing homelessness. Meanwhile, some city councilmembers said they saw homelessness numbers skyrocket in places where they had provided shelter to more people.

The new app volunteers will use this year is developed by the company Esri, which has made similar homelessness counting apps for San Bernardino, Ventura, Riverside, New York City, and Washington D.C. Officials say it’s designed to save data even if the user goes offline. It will also allow officials to track volunteers’ progress, so they can ensure census tracts don’t get missed.

Also, a pair of LAHSA employees will be stationed at each volunteer-deployment site to assist with technical issues or distribute paper surveys for those that can’t or don’t want to use the app.

“We have a tally, a grid,” explains LAHSA’s Deputy Chief Information Officer Emily Vaughn Henry. “They can actually write into that grid the number of RVs, the number of tents, the number of individuals that they're seeing in the field.”

This week’s annual point-in-time count is mandated by the Federal Department of Housing and Urban Development (HUD), which requires it to be done during select days in January. Once data is collected, it’s combined with sample demographic data obtained by USC researchers, so LA officials can estimate the racial and gender makeup of the county’s unhoused population, as well as the number of people suffering from mental health issues or substance abuse problems.

However, some have questioned whether the point-in-time counting methodology itself results in inaccuracies.

“The general takeaway with the LAHSA counts, at least partially because of when they're conducted … is that they often represent undercounts,” says Jason Ward, associate director of LA’s RAND Center on Housing and Homelessness. “Maybe people are sheltering out of sight, or people have found some kind of different shelter option because of the weather.”

RAND began conducting its own counts in 2021 after LAHSA skipped the 2020 point-in-time count because of the pandemic. RAND uses very different methods than LAHSA. Over the course of a year, they visit select sites in high-profile areas like Skid Row, Hollywood and Venice, and repeatedly survey the unhoused people living there.

Ward says this offers a better sense of how factors like encampment sweeps or bad weather can impact populations over time. Their research has suggested there are often more unsheltered people living in these areas year-round than LAHSA’s point-in-time counts capture.

The HUD definition used for LAHSA’s count also doesn’t include people who are couch-surfing or living in temporary or insecure situations like motels, or housing where multiple families live under one roof. The Los Angeles County Office of Education uses a different definition of homelessness that includes these “housing-insecure” Angelenos, and their annual surveys of students also show far higher numbers than LAHSA’s count.

“Our numbers are like skyrockedly totally different than theirs, and they're large. I mean, we're talking like 51,000 students identified,” says Jennifer Kottke, coordinator for the county’s Homeless Education Program.

Kottke says getting data on this type of homelessness would likely be a difficult feat on a countywide scale — and some officials worry it might also overwhelm the system.

“If we identify all these shared housing pieces, then we just added a whole ton of people we may not be able to serve, and the line’s even longer than it was before,” says Kottke.

While LAHSA’s count might be flawed, it remains the only survey that attempts to account for all unhoused people in the county’s 4,000-square-mile radius. It also provides year-over-year data that allows the public — and politicians who are angling to solve homelessness — to track how the problem has changed over time.

The 2023 count will kick off tonight in the San Gabriel and San Fernando Valleys before moving on to East and West LA on Wednesday, and South LA, Central LA and the Antelope Valley on Thursday. Those interested in participating can sign up at TheyCountWillYou.org.