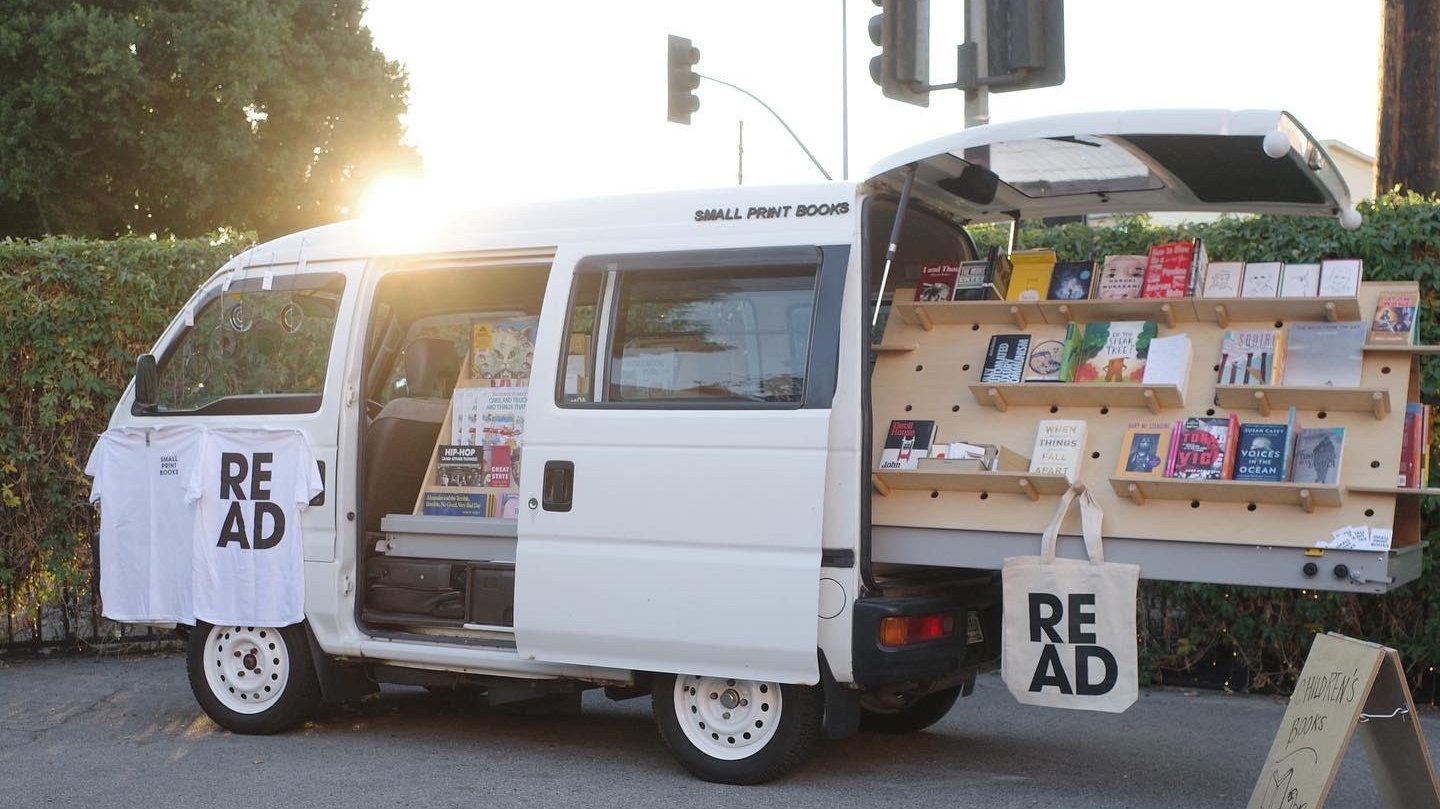 Los Angeles doesn’t always get the credit it deserves as a book town. But from local joints like Skylight Books and The Last Bookstore to global events like the LA Times Festival of Books, the city has a strong tradition of readers and writers.

Among the new additions to the literary landscape are a couple of unconventional stores looking to cater to hungry minds. Small Print Books is run by local filmmaker Colter Freeman out of the back of his van.

According to Freeman, the idea came out of the pandemic. “I started to see mobile businesses … a couple of cactus trucks and flower trucks and mobile coffee businesses and that kind of thing. And I thought I could do something like that in a more forward-facing retail way, but for curated pieces that I want. Initially, it was going to be a record store with coffee and books, and then it slowly turned into just books.”

Freeman’s vehicle of choice? A microvan from Japan that measures 5 feet by 10 feet. “[It’s] a little bigger than a golf cart,” he explains. The van’s diminutive size keeps him off the freeways and primarily on the east side of Los Angeles. “On the weekends, you can usually find it at the Silver Lake Reservoir.”

“I always want to encourage questions,” he notes. “Part of it being so small on my end [is] that I get to interact one-on-one. Depending on the crowd … I might have a conversation for 10 or 15 minutes with a customer. I think being able to have that listening-party experience, one-on-one interaction goes a long way with my setup.”

Annabelle Chang hopes to cultivate a similar personal relationship with her customers at Annabelle’s Book Club LA, a young adult (YA) bookstore in Studio City. The 16-year-old believes young readers like herself are looking for writing that speaks to them.

“When the pandemic hit, I had so many requests for book recommendations from my friends and my classmates that I decided to start an Instagram account and blog devoted to my favorite YA reads,” Chang explains. That social media account turned into an online store and eventually a brick-and-mortar.

Chang claims the response from her customers disproves the notion that young people don’t like books. “A lot of people think that teenagers aren't as interested in reading now in this digital age, but I've found the opposite, actually. The teenagers in Studio City around my store have been so excited to come in and find books that are catered towards them.”

According to Chang, her store’s focus on YA literature helps fill a gap in the market. “In all of my research, I couldn't find a bookstore that was focused on this genre. I just feel like YA is such a universal and important genre for people of all ages.”

Both Chang and Freeman agree that LA gets a bad rap as a reading town. “LA is a book city,” Freeman asserts, evidenced by “when someone who's covered in sweat, who's been running for 30-40 minutes will stop their day, and walk away with like four or five books” from his mobile store.