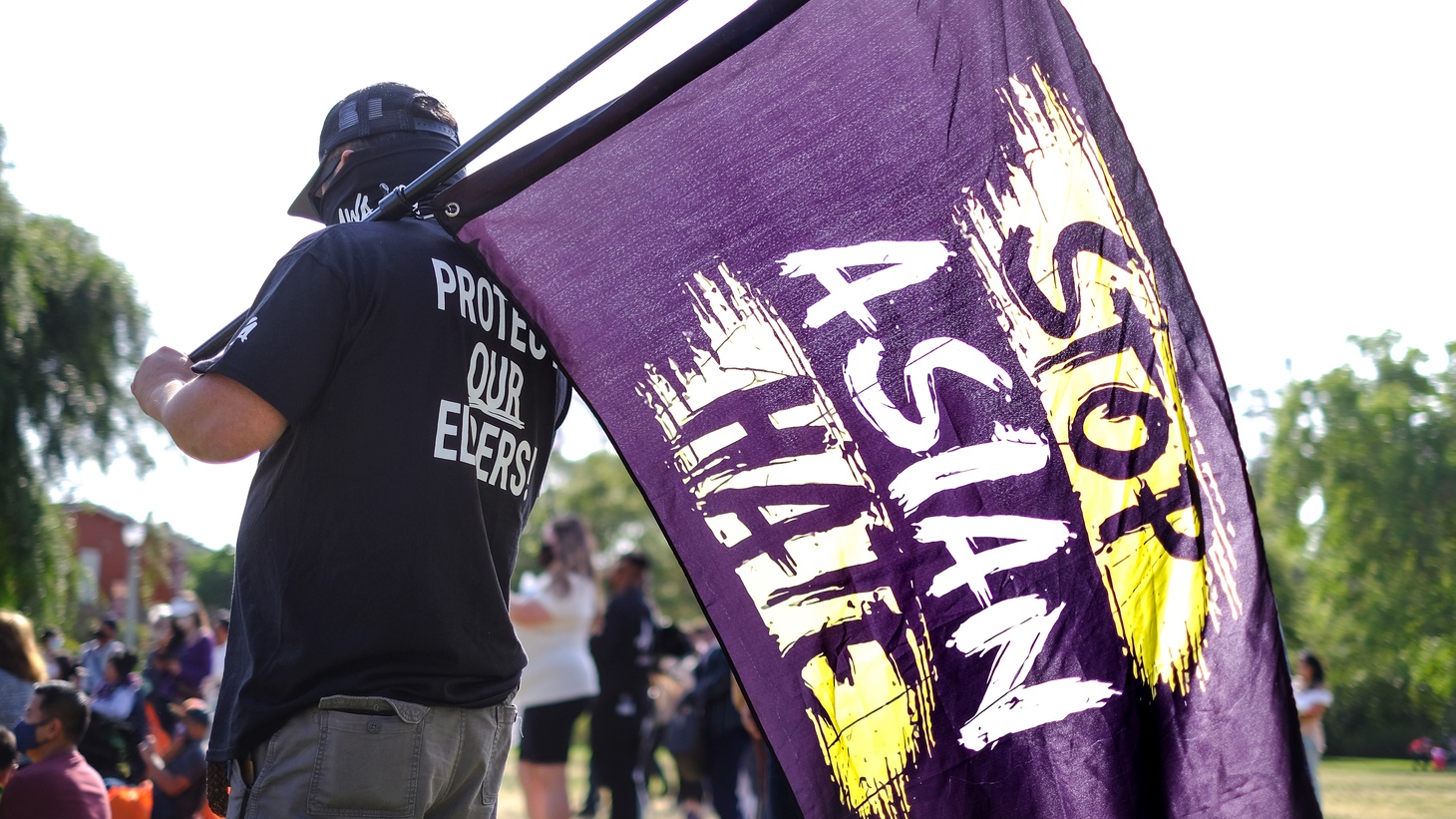 A man holds a flag that says, “STOP ASIAN HATE,” while wearing a t-shirt that says, “Protect your elders,” at a rally in the San Gabriel Valley, California, May 22, 2021. Photo by Amy Ta/KCRW

It’s been a year since a gunman killed eight people at three Atlanta-area spas. Six were women of Asian descent. The killings were the most shocking example of a wave of anti-AAPI (Asian American Pacific Islander) hate that began with the COVID-19 pandemic two years ago.

The violence hasn’t stopped. In late January, a Korean liquor store owner in Long Beach was stabbed by a customer. She was left paralyzed from the neck down. And videos showing elderly Asians being attacked in Brooklyn, San Francisco, and Tacoma have gone viral.

This anniversary of the Atlanta shootings is a solemn day, says Cynthia Choi, co-founder of Stop AAPI Hate, and co-executive director of Chinese for Affirmative Action.

“It continues to lift up the fact that this is not new to our community. And certainly, it is exacerbating the fears and ongoing suffering for our community and across the country,” she tells KCRW.

Hate crimes are still happening nationwide, even in public places, and lots of work must be done to stop them, she says, adding that more than 60% of women are experiencing violence on public transit and neighborhood streets, and even in grocery stores.

“There's a hesitancy to report, [driven by] this feeling that even if they did, what can be done about it? And so part of our mandate is to make sure that people know that it does matter that they report to visualize this issue. … The more we have an understanding of who is being impacted, where it's happening, the nature of this hate and discrimination, the more that we can develop solutions.”

Greater LA: LA activist says hate crimes are universal, distributes booklets on how to recognize and report them

Why the model minority myth can be dangerous

Choi says the model minority myth might exacerbate discrimination toward Asian communities and dismisses their hardships.

“No community is immune to violence. And so we have to come together around structural issues around inequality and what the drivers of hate and discrimination are.”

It’s also crucial to publicly address that women and other vulnerable community members endure some of the most harassment and find ways to prevent that.

She adds, “We have to address the discrimination that's happening in private businesses. No one should feel unsafe going to the grocery store or taking public transit, or merely taking a walk outside their neighborhood. And this is something that we're very committed to addressing through our legislature and also as a movement.”