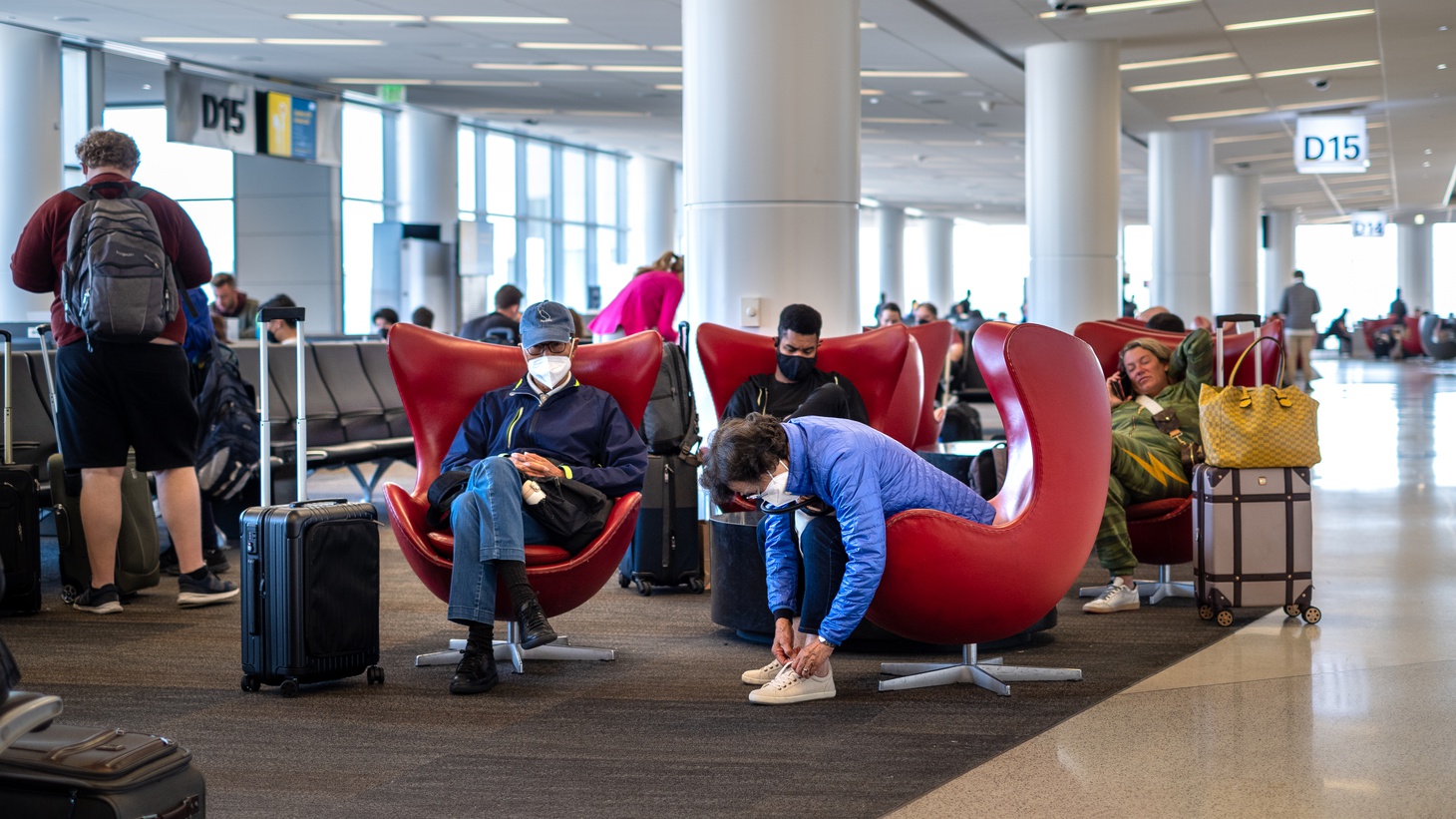 Passengers wait to board their flights at San Francisco International Airport, May 23, 2022. “The [COVID] vaccines came, variants of the virus became less deadly. And what we see now is that people want to travel … everywhere,” says Laurie Garrow, who studies the airline industry. She notes that people particularly want to go to leisure destinations like Florida and Europe. Photo by Amy Ta.

Air travelers nationwide experienced chaos, long lines, delays, and cancellations over the July 4 holiday weekend. This has been happening for months, and now it’s worse during summer.

To understand the industry now, it’s helpful to look at the start of COVID-19, says Laurie Garrow, engineering professor and co-director of the Center for Urban and Regional Air Mobility (CURAM) at Georgia Tech. In March 2020, 95% of passenger demand evaporated, so the industry took half of their aircrafts out of service, and furloughed or offered early retirement packages to much of their staff, she explains.

“Then the vaccines came, variants of the virus became less deadly. And what we see now is that people want to travel … everywhere. So what we're seeing is a whiplash in demand. We basically took all of this capacity out of the system, and now we're trying to get it back in. And you just can't do that overnight.”

She notes that people particularly want to go to leisure destinations like Florida and Europe.

“A lot of airlines have scheduled flights into the Florida area. And the air traffic control system has gotten overwhelmed. … There's been a concerted effort of the FAA and airlines to work together to be able to better handle that corridor and help stop air traffic delays.”

Meanwhile, flight departures are down 15% from the numbers pre-COVID, she explains, and many airlines expect to have full staff and all planes back in service by the end of 2022. However, training and recruiting of pilots could take longer.

She adds that the supply-demand mismatch in the U.S. is occurring in other parts of the world too.

Meanwhile, Vermont Democratic Senator Bernie Sanders is asking Transportation Secretary Pete Buttigieg to make airlines refund passengers whose flights are delayed, and cover their meals and lodging if needed. He also wants Buttigieg to possibly fine airlines $55,000 per passenger when canceling flights that they knew couldn’t be fully staffed. Garrow says all that will be difficult to implement.

“I don't want to put any incentives in that might compromise safety. … If you're putting in a fine … for not flying this aircraft, I don't want to put a pilot in a position to feeling like he has to fly if he's not totally on top of his game,” she says.

Some may argue that because the U.S. government sent billions of (taxpayer) dollars to airlines so they could survive the pandemic, those companies are obligated to provide better service now.

But Garrow responds, “We're in a once-in-a-lifetime situation here for the airline industry. I don't think anyone could anticipate how long or sustained that this demand drop was going to be, nor how quickly demand has whiplashed back. … There's only so much you can do to … provide a safe service and one that is fully backed up.”

What should you do now if you want to get out of town?

Book a flight — particularly nonstop — in the early morning. That way, you don’t have to worry about making a connection on time, and delays/cancellations are more likely to happen later in the day, Garrow advises.

She also recommends downloading the app for your airline, so you can get information about delays or cancellations, and buy insurance.

“A lot of people are traveling, so … just be patient and be prepared to wait in a lot of lines,” she adds.