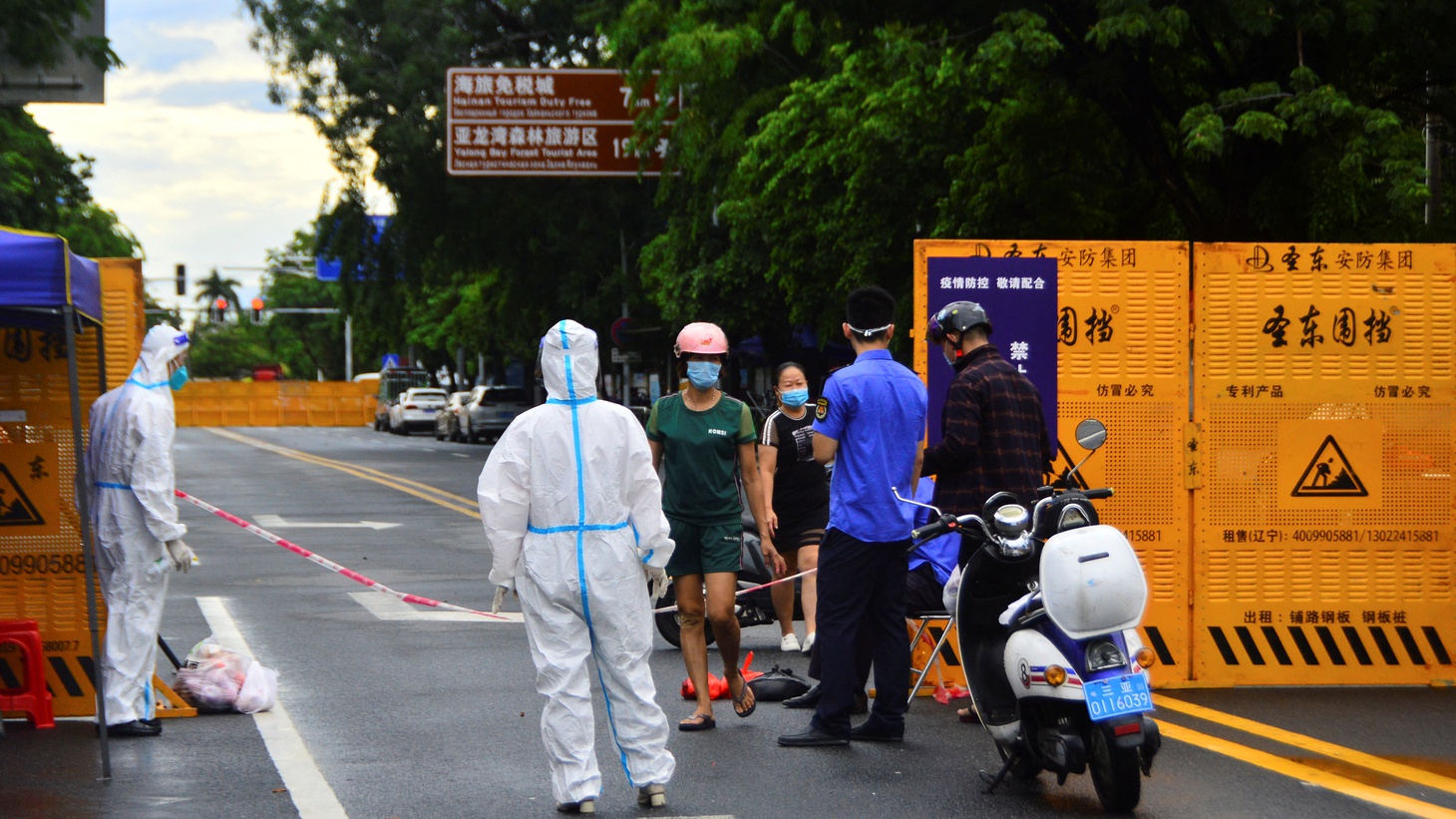 A delivery courier places food near a barricade at an entrance to a residential compound, amid lockdown measures to curb the coronavirus disease (COVID-19) outbreak in Sanya, Hainan province, China, August 8, 2022. Credit: China Daily via REUTERS.

Nearly three years into the pandemic, China is still enforcing strict COVID-19 rules. A handful of positive cases can force millions of people into lockdowns and trigger mandatory testing. In Ghulja, where nearly half a million people live, residents have been under lockdown for more than a month. Residents have taken to social media to complain about hunger and dwindling medical supplies. Near Guiyang, a bus carrying dozens of people to a quarantine facility crashed, killing at least 27 passengers. The incident is renewing debate about the nation’s strategy, especially as the rest of the world moves toward living with the virus.

Lockdowns in China are constantly popping up, so it’s hard to track exactly how many people are stuck indoors, but at last count, more than 1,000 districts are locked down, according to Associated Press reporter Dake Kang.

At times, lockdowns can drag on for months, he says.

“When there's a case detected in a district, the authorities say, ‘Okay, we're closing things down. Nobody’s gonna come in and out.’ And then they set up a very rigorous testing regime where people have to test once or twice a day, depending on the particular city,” he explains. “It basically means you're locked at home. And you can order groceries, hopefully. But otherwise, you can't really go out.”

The cause of the Guiyang bus crash is still unknown, and Kang questions why it was traveling in the middle of the night. He says one theory is that quarantine facilities in the area are filled to capacity.

So far, the Chinese government reports that more than 5,000 people have died of COVID-19 since 2020. Kang says it’s difficult to compare that number to other countries’ statistics because China’s definition of a COVID death is stricter: “You actually have to have doctors come in and say, ‘This person died directly from COVID and not from other causes.’”

During the early days of the pandemic, China’s so-called “zero-COVID” policy — taking whatever steps needed to prevent all cases of the virus —  held popular support. But as the Omicron variant continues to spread, Kang says lockdowns are wearing down some residents.

“​​Last year, it was still possible to travel reasonably freely within China. Now, that's all changed. I'm not saying that everyone in China is fed up with ‘zero-COVID.’ It still certainly has quite a few supporters. But I do think that there are now quite a number of people who are also fed up with the policy.”

China is preparing for its 20th Communist Party Congress, which involves picking the next generation of leaders and potentially changing COVID policies. However, Kang says the country faces a new challenge: a population without natural immunity to the virus, partly due to lower vaccination rates.

“Sooner or later, China is going to have to open up and when that happens, the virus is going to sweep through. And the most vulnerable are the elderly people,” he says. “I do think people in the medical establishment here are realizing that that is a problem and that does need to change.”