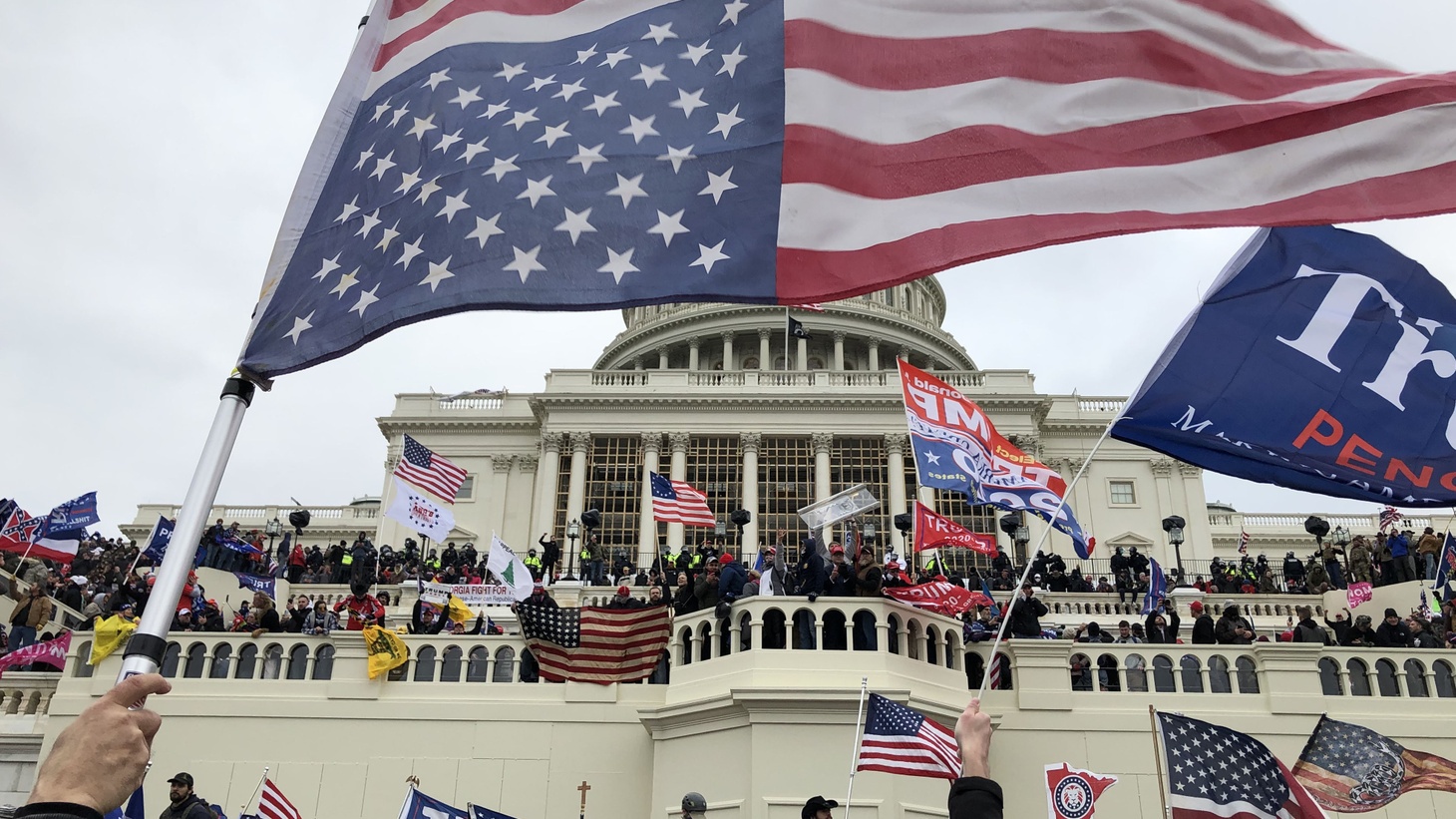 Thousands of people traveled to Washington D.C. for a rally held by then-President Donald Trump a year ago, repeating the lie that the 2020 election was stolen. Trump urged supporters to march on the U.S. Capitol, where Vice President Mike Pence and Congress were certifying the election results.

Soon, hundreds of Trump supporters formed a violent mob and breached the U.S. Capitol building, causing one of the most shocking assaults on American democracy in history. Ultimately, seven people died in connection with the attack, 140 police officers were assaulted, and Trump became the first president in U.S. history to be impeached twice.

Today, more than 700 people face federal charges for their actions that day. KCRW talks to New York Magazine feature writer Kerry Howley, who profiled three people who stormed the Capitol and what’s happened to them in the months since.

One of the insurrectionists — Gina Bisignano — owns a Beverly Hills salon and was social pre-pandemic. Once COVID hit, she was opposed to local and state restrictions. She connected with other like-minded people and became more radicalized.

“During the pandemic, people were stuck inside. They were online a lot. They were lonely and they were desperate for an experience. And here was the president saying it's gonna be wild. And that was deeply tempting to people who felt trapped inside,” Howley theorizes. “I don't actually think any of the three people I profiled — this is speculation — but I don't think they would have shown up had it not been for the pandemic.”

Rosanne Boyland, 34, died at the Capitol that day. She lived with her parents in Georgia, taking care of her chronically ill mom. And while she was restarting her life after overcoming drug addiction, she became political six months before the insurrection. She was completely taken by the Qanon conspiracy.

After participating in the violent melee outside of the U.S. Capitol building’s west terrace, Boyland collapsed. An autopsy report determined her cause of death to be an amphetamine overdose, and conspiracy theories claim that police killed her. Her family argues she only took prescribed drugs, and is trying to find out what truly happened.

Guy Reffitt, a Texan oil worker and family man, became involved with The Three Percenters. As his son Jackson explains, Reffitt’s personality changed throughout the Trump presidency. He became more vulgar and often talked about something “big” happening. It prompted Jackson to send a tip to the FBI about his father’s concerning behavior.

Reffitt showed up in Washington D.C. on January 6 armed, although he was later shot with rubber bullets and maced by police. As a result, he went home and didn’t breach the Capitol building. The FBI arrested Reffitt shortly after the attack.

Reffitt is currently in jail, while Bisignano has finished her jail sentence.

“Gina [Bisignano] certainly regrets the way that this has torn her life apart. I don't know what the current status of [Reffitt’s] emotional state is. But in early days in jail, he released a letter that he said came from a bunch of the patriots in that wing of the prison. That was full of this talk of democracy and patriotism and duty — the sense that these people were protecting democracy, not seeking to tear it down.”

What has Howley learned about the likelihood of Jan. 6 repeating?

“January 6 wasn’t just one thing. But in fact, there are people who showed up who had military training, who had extensively planned, who were clearly there to stop the certification of an election and were prepared to do so violently,” she says.

She adds that it’s clear the U.S. doesn’t know what to do with people who aren’t able to differentiate between fact and conspiracy.