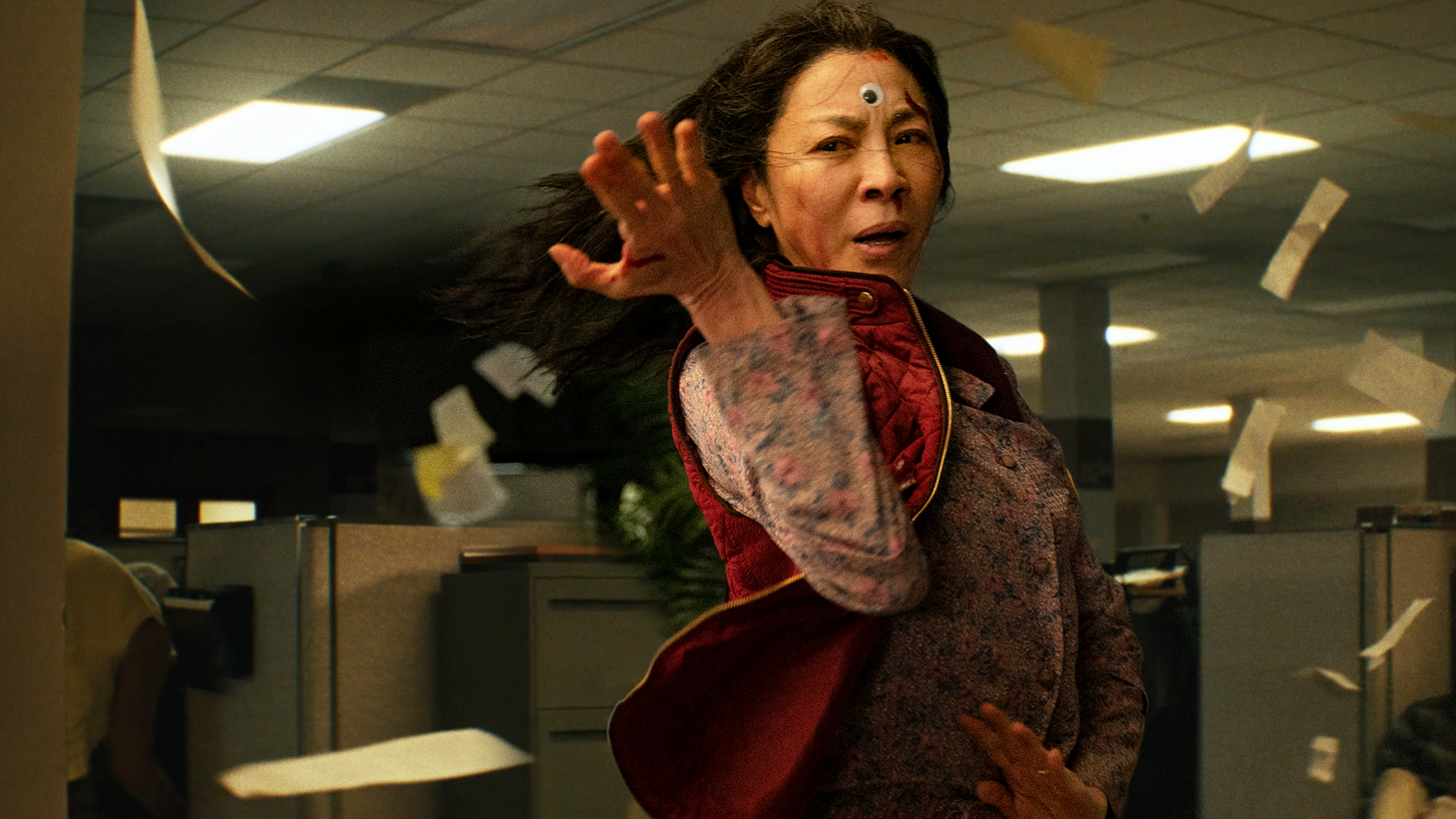 “As I was watching them do the amazing martial arts … it just clicked. … This is like a huge musical piece — the rhythm, the tempo, people moving … with each other and for each other. And it was all choreographed. And it was about precision and timing. And I thought, ‘I can try it, right?’” says Michelle Yeoh. Credit: Courtesy of A24.

In “Everything Everywhere All at Once,” Michelle Yeoh plays a middle-aged laundromat owner who gets caught up in the multiverse. She tells KCRW that the single movie has five genres — science fiction, comedy, drama, family, and romance — and she does things that audiences haven’t seen before. “This was like a super heroine that I've been waiting for,” she says.

Her career has spanned decades. She came onto the U.S. movie scene in 1997 as a Bond girl in “Tomorrow Never Dies.” She then starred in “Crouching Tiger, Hidden Dragon” and “Memoirs of a Geisha,” which each won multiple Oscars. In 2018, she played the strict mother in “Crazy Rich Asians.” In 2021, she was the aunt guiding Marvel’s first Asian superhero in “Shang-Chi and the Legend of the Ten Rings.”

Yeoh tells Press Play that her new character, Evelyn Wang, is the most ordinary, aging Asian immigrant who’s trying to keep her business going, while learning to understand her lesbian daughter (Joy Wang, played by Stephanie Hsu). When she was younger, she disobeyed her father (Gong Gong, played by James Hong) by chasing the American dream with her doting and jolly husband, Waymond Wang (played by Ke Huy Quan).

“Now when you meet her, she’s been weighed down. She simply can't get her taxes together, and they're being audited. She could lose her business, they could all be bankrupt and on the streets. … She is having the worst time of her life is tough,” Yeoh describes. “But what I appreciated most was to give a voice to this woman who is somebody's mother, somebody's auntie, somebody's grandmother, who we pass on the streets … who goes unnoticed and unheard, and not appreciated in any way, any form.”

Co-writers and co-directors Dan Kwan and Daniel Scheinert actually created the script with her in mind, originally naming the character Michelle Wang. “The one thing I said to them was: ‘You have to change the name. … She's not Michelle because everyone should get the respect she deserves. She is this woman, this character that needs a voice and should not be distracted by Michelle Yeoh.’”

The actress says love — between a mom and daughter, husband and wife — is at the core of the story, and they all still find each other across the multiverses.

Yeoh originally trained to become a ballerina, and she says she loved that form of dance since she was very young, but she didn’t have the ideal body or skin color at the time.

“In the 70s, if you look at the most renowned ballet companies in the world, you don't see an Asian popping up in the lineup. … But that did not detract me from wanting to be part of the world.”

She says it was her dream to dance eight hours a day at school, then return to Malaysia and start her own ballet institution for kids.

She notes that ballerinas are extremely tough. “They might look so graceful and ethereal. But to the core of it, their strength — then standing on tiptoes, having blistered … and bloodied feet the whole time, that takes a lot of grit and a lot of love for what you do.”

After suffering a severe back injury, doctors told Yeoh to stop ballet permanently. “When you're 16, 17, and to be told you can't do something that you love day in, day out — it was heartbreaking. … [But] what you have to do is pick yourself up and go, ‘I'm moving forward, and I have to learn from this’ because every choice or decision gives you a different opportunity.”

An actor with stage fright

She ended up getting her bachelor’s degree in dance and discovered theater along the way.

“If you said to my lecturers at that time that … this Michelle … would one day be an actress, they would probably best bet their last dollar or pound to say there is no way that's ever happening,” she admits.

But then she got an overseas acting gig after her friend from Malaysia showed her portrait to a major producer in Hong Kong and said, ‘This is my friend. Don't you think she'd be perfect for your new commercial that you want to do? … Why don't you invite her to come to Hong Kong and let's see?’”

She explains that in the 1970s, the Jackie Chans and Jet Lis showed the industry what martial arts truly was. “They broke bones, they hurt themselves. So in their minds, there's no room for a woman because ‘our women are fragile, and we need to protect them.’ So that was really the mindset, and that's fine.” 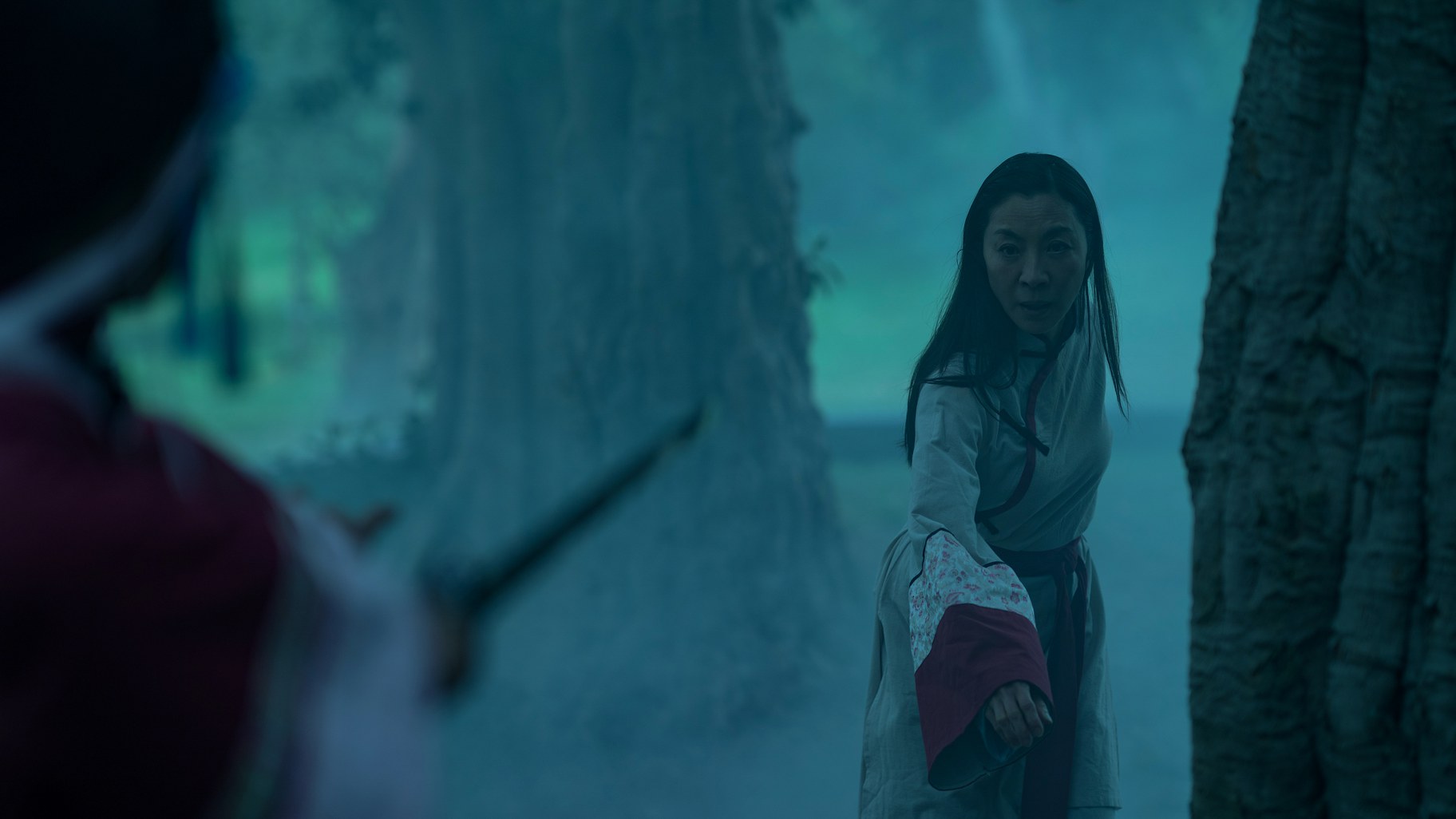 The role of Evelyn Wang was written with Michelle Yeoh in mind. Photo credit: Allyson Riggs.

The connection between dance and martial arts

“As I was watching them do the amazing martial arts … it just clicked. … This is like a huge musical piece — the rhythm, the tempo, people moving … with each other and for each other. And it was all choreographed. And it was about precision and timing. And I thought, ‘I can try it, right?’”

She ended up joining a gym where she learned from stuntmen, martial artists, and trained actors. “I had a lot to prove my worth, that I deserve to be there with them. … I am willing to take the blows. And I'm not just the fragile little girl."

Yeoh was already used to pain and discipline, given her ballet background. But with martial arts, she learned to be precise. “God forbid, they say, ‘Punch around the head.’ And you punch them straight in the neck. All the little details, and respecting the space and distance, but [staying] close enough and without fear.”

She shares that from her beginnings in martial arts to this day, she continues to shadowbox in front of the mirror each morning. It’s to wake up her body and prepare it for a new day.

Approaching age 60, not slowing down

“I am physically very fit at the moment,” she says, adding that age shouldn’t impose limits, and it all depends on how you look after yourself.

When it comes to pain, she says, “It’s like you know when it’s gonna rain. … I know I have injuries in certain areas, okay, this is how I will protect it. But this is how I will strengthen it. And this is what you learn to do for yourself.”

“I love the satisfaction of after — when you've done it and you step away and you go like, ‘Haha, I gave you young kids a run for your money, didn’t I?’ It’s so much fun.”