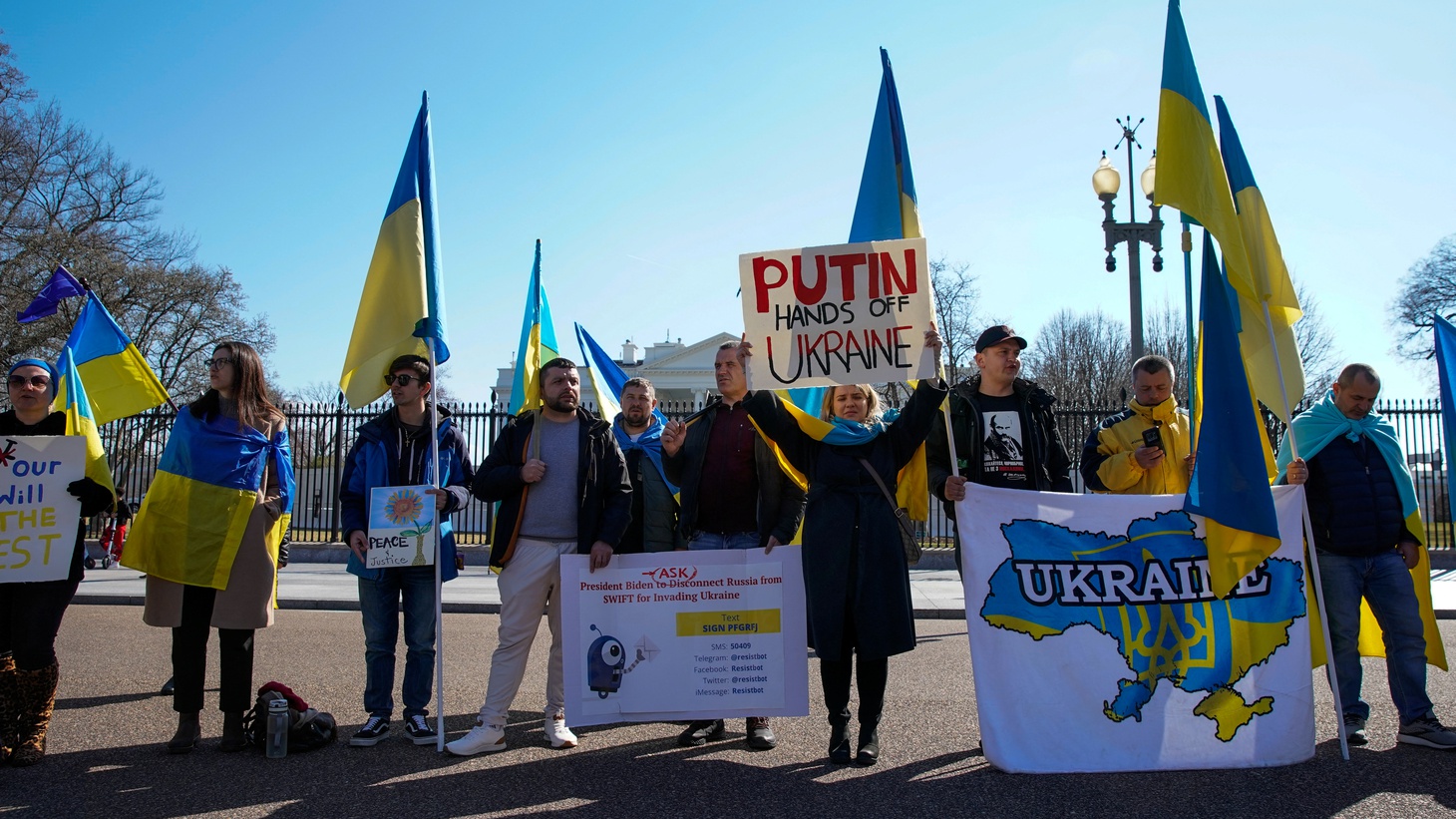 Demonstrators hold Ukrainian flags, signs, and banners during a "Stand with Ukraine" rally against the Russian invasion of Ukraine, in front of the White House in Washington, U.S., February 28, 2022. Photo by REUTERS/Elizabeth Frant.

Massive protests against the Russian invasion of Ukraine happened over the weekend worldwide, including in Washington, Berlin, London, and even Moscow. Today delegations from the two countries met in Belarus for their first talks since fighting broke out last week. According to Ukrainian officials, hundreds of civilians have been killed since the start of the invasion, and today Kharkiv, Ukraine’s second largest city, came under heavy Russian rocket fire.

Meanwhile, the United States and Europe implemented harsh sanctions, freezing hundreds of billions of dollars that Russia put in reserve. Russians flocked to ATMs to withdraw their money, and the Moscow stock exchange didn’t open.

“The work the administration has done to beef up sanctions has been remarkable. And the degree to which Europe and NATO have come together, I think is beyond anyone's expectation, and probably beyond Putin's expectation, and it's putting a lot of pressure on Russia right now,” says Burbank Democratic Congressman Adam Schiff, who also chairs the House Intelligence Committee.

Schiff says the sanctions are already causing Russian capital to be worth a lot less. “From the wealthiest to the poorest Russians, they're going to see the consequences of Putin's naked aggression against its neighbor.”

He adds that as the conflict becomes more protracted and Russian troops die, Russian civilians will have more serious questions about why Putin has gotten them into this situation.

When it comes to providing Ukrainians with military supplies, the U.S. has already provided a lot, and the Biden administration just approved hundreds of millions of dollars more. “I'm glad that we are providing vigorous military support. I'm glad that Europe is going to assist with that. And I'm certainly ready to do more and on a very bipartisan basis in Congress,” Schiff says.

The congressman acknowledges that there’s a highly influential pro-Putin wing of the GOP that’s exemplified by Trump’s praise of the Russian leader, but assures that the U.S. House and Senate have a broad group of Republicans who are ready to support stronger sanctions and military aid.

Schiff says the U.S. is also able to track Putin’s wealth “enough to make him pay a personal price for engaging in this unprovoked war.” The Russian president’s wealth is estimated to exceed $100 billion, though the extent of his holdings is mostly a mystery.

What about the possibility of Putin unleashing a nuclear strike? It’s concerning, but a cyber response to sanctions is more likely, Schiff says.

“Putin has been very isolated during the pandemic. .. Whether we can conclude he’s clinically got mental health issues, it's so hard for us to understand how he could invade a country in this century, in the heart of Europe, that we tend to think, ‘Okay, that person is just not sane.’ But it’s calculated,” says Schiff. “And so I think that there's a real danger that he's gotten either bad advice or no advice from people around him — that he is increasingly isolated and prone to make bad judgments. And I think he's made a supremely bad one with this invasion.”