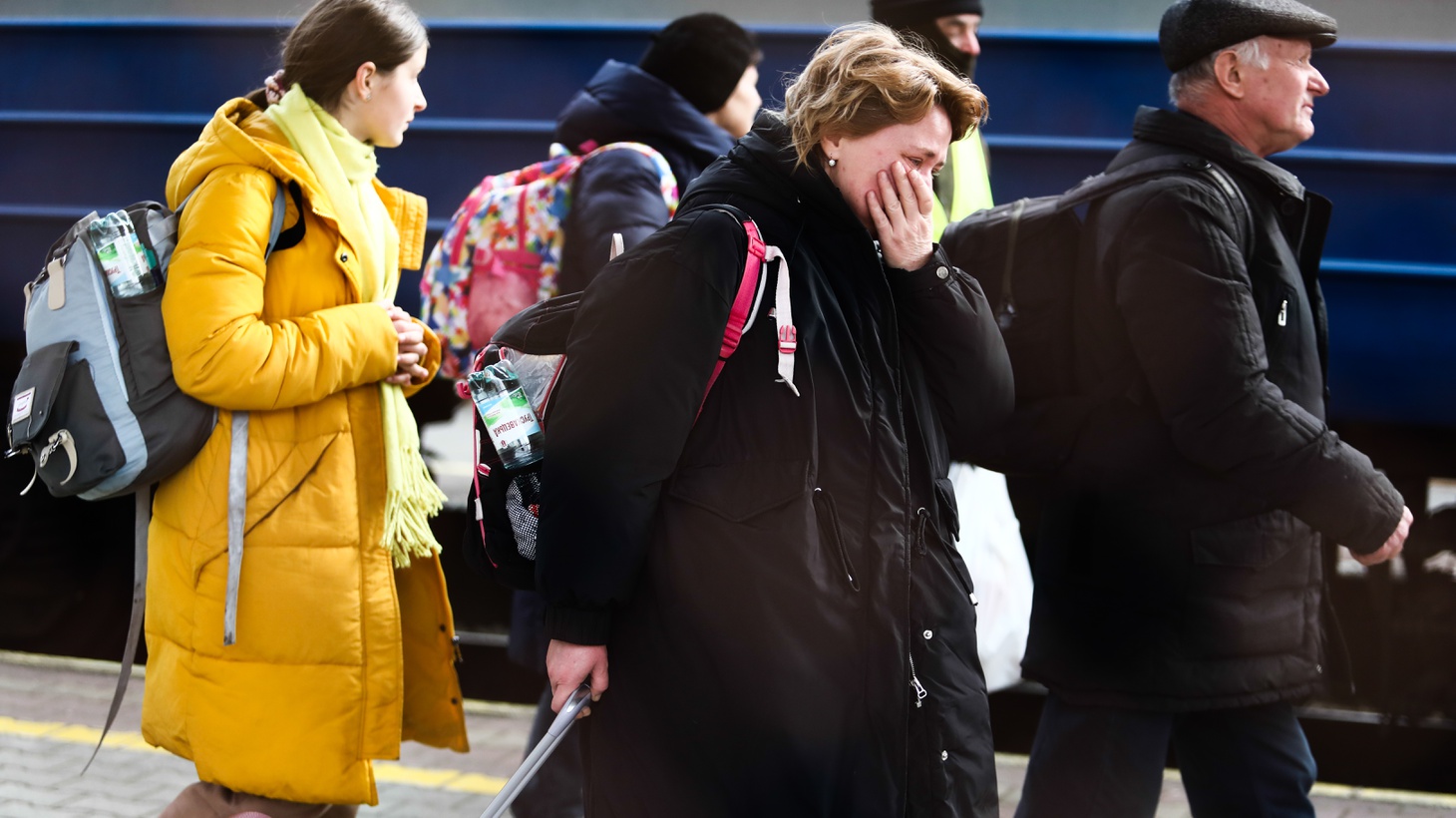 People fleeing from Ukraine arrive at the train station in Przemysl, Poland on March 3, 2022. Thousands of refugees are crossing the Ukrainian-Polish border after the Russian invasion. Photo by Jakub Porzycki/NurPhoto.

One million people have left Ukraine since Russia began its invasion a little more than a week ago, according to United Nations High Commissioner for Refugees Filippo Grandi. Refugees are flooding Ukranian border towns, where they face days-long waits to cross into neighboring countries. Because of martial law, men of fighting age must stay behind, so mainly women and children are fleeing.

“They’re waiting in very long lines to cross the border with very few possessions, and with just a profound sense of uncertainty about what's going to happen to them once they cross the border,” says Serena Parekh, professor of philosophy and the director of the Politics, Philosophy, and Economics Program at Boston’s Northeastern University. She’s also author of “No Refuge: Ethics and the Global Refugee Crisis.

The European Union recently unanimously agreed to accept Ukrainian refugees for up to three years without applying for asylum. That gives refugees employment authorization and health care access.

Meanwhile, Poland has opened nine reception centers, and says it could welcome as many as 1 million refugees. Poland and Romania say they will accept migrants regardless of passport or visa status. But people might start questioning those policies if the conflict lingers on, Parekh says.

“It's possible that politicians will start to use them as a wedge issue to say that, ‘No, they shouldn't be there. We know we're gonna fight for our people and keep these foreigners out,’” she says. “We could absolutely see that. So much depends on the nature of the conflict, how long it lasts, and how refugees are talked about in the media.”

The United States has its own resettlement program, and today President Biden announced that he would grant Temporary Protected Status (TPS) to an estimated 30,000 Ukraninas. They’ll be allowed to stay at least 18 months. The U.S. already has 30,000 Ukrainian nationals who are on temporary visas.

“[TPS] can effectively turn into a permanent status, which wasn't intended to be,” Parekh says. “But if you're from one of these vulnerable countries, the ability to have the status renewed and not have to go back, especially once you've been here for years and sometimes decades, it's very positive.”

However, Parekh notes, “Most people who have left Ukraine would like to go back as soon as possible.”

Parekh has been critical of the way certain countries help refugees. In a New York Times interview, she talked about xenophobic approaches when admitting refugees. A lot of that occurred in the past decade, specifically during the European refugee crisis in 2015, when about 1.3 million migrants escaped war and prosecution from countries across Africa and the Middle East. It’s the most ever recorded in a single year, with more than half of the refugees coming from Syria, Afghanistan or Iraq, and originating from as far as Pakistan and Nigeria.

While migrants sought entry to the E.U., countries like Greece, Bulgaria and Hungary built fences along their borders and barred incoming refugees. Poland also joined Hungary in refusing to take any refugees in a 2015 deal that allocated 160,000 people across the E.U.

Parekh says an outpouring of xenophobia, nationalism, and determination prevented them from entering the E.U. and Eastern Europe.

“All of a sudden, this was turned on its head, and Poland and Hungary and these other countries were saying, ‘These are our neighbors, they're our brothers, we must welcome them,’” Parekh adds. “It really struck a lot of people as being very dissimilar to their treatment of refugees from other parts of the world.”

Parekh points out two reasons why there’s a change of heart. The conflict hits close to home for those countries and their citizens because they know what it’s like to live under Soviet oppression or experience Russian aggression. The other reason is more political. She says if the countries don’t admit refugees, this could feed into Vladimir Putin’s narrative about liberal democracies and how it doesn’t live up to their values.