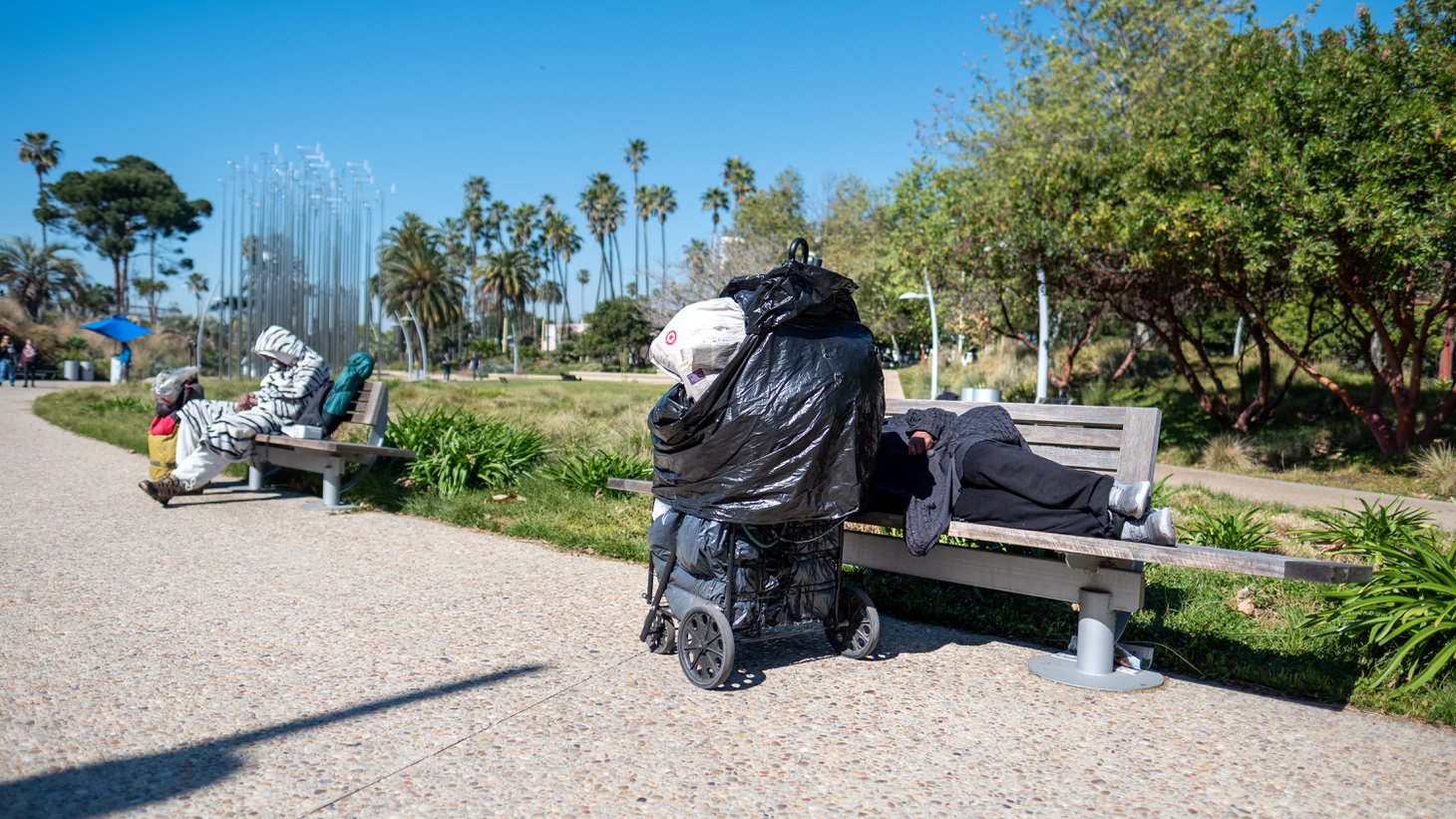 Two unhoused individuals occupy separate benches in Tongva Park, Santa Monica, February 25, 2022. “People become homeless when they have no personal safety net in their family or their network. So they have exhausted all of the resources available to them,” says Janey Rountree, executive director of the California Policy Lab at UCLA. Photo by Amy Ta/KCRW

Homelessness is tightly woven into the fabric of Los Angeles. Blame the lack of affordable housing, the pandemic and its health and economic effects, plus the always-rising cost of living. Two years ago, the population of unhoused people in LA County jumped to over 66,000 people. That’s the highest count on record and the most recent figures available.

Now UCLA researchers are using computer modeling to try to predict who is most likely to become homeless, so county officials can intervene before it happens.

The data comes from people who already receive physical or mental health services from LA County, such as individuals who need crisis stabilization or who are in emergency departments. That’s according to Janey Rountree, executive director of the California Policy Lab at UCLA.

Rountree says a key predictor of homelessness is a lack of a support network: “People become homeless when they have no personal safety net in their family or their network. So they have exhausted all of the resources available to them.”

She adds, “That's why we're really starting the modeling with people who are already in public programs, and then looking at additional … factors and features to help us understand who's at really high risk,” she explains.

Rountree points out that people who use public benefits, like to secure housing, may also end up on the streets. Run-ins with law enforcement are also risk factors.

While the UCLA research team uses anonymous data, it makes a list of those who could become homeless, and gives that back to LA County. From there, providers can work on a strategy to address the needs of those at risk.

“They'll get pretty intensive support from that moment on if they opt in, so they're gonna get calls from a caseworker, or they're gonna get asked what they need. Most commonly, it's paying back rent or helping stabilize the person's rent. Sometimes it's helping reconcile a family situation if someone's doubled up in a family home. … And definitely referrals to health care and mental health care services as well if they're needed.

So far, the program has identified about 150 Angelenos who have been at risk of becoming homeless and 90% have retained their housing. Rountree says it’s a promising outcome so far.

Rountree adds that before the predictive modeling program, trying to accurately identify who needed care was difficult. That’s due in part to how many Angelenos live below the poverty line and struggle to afford LA’s expensive housing.

But she points out that the program isn’t going to fix the homeless crisis.