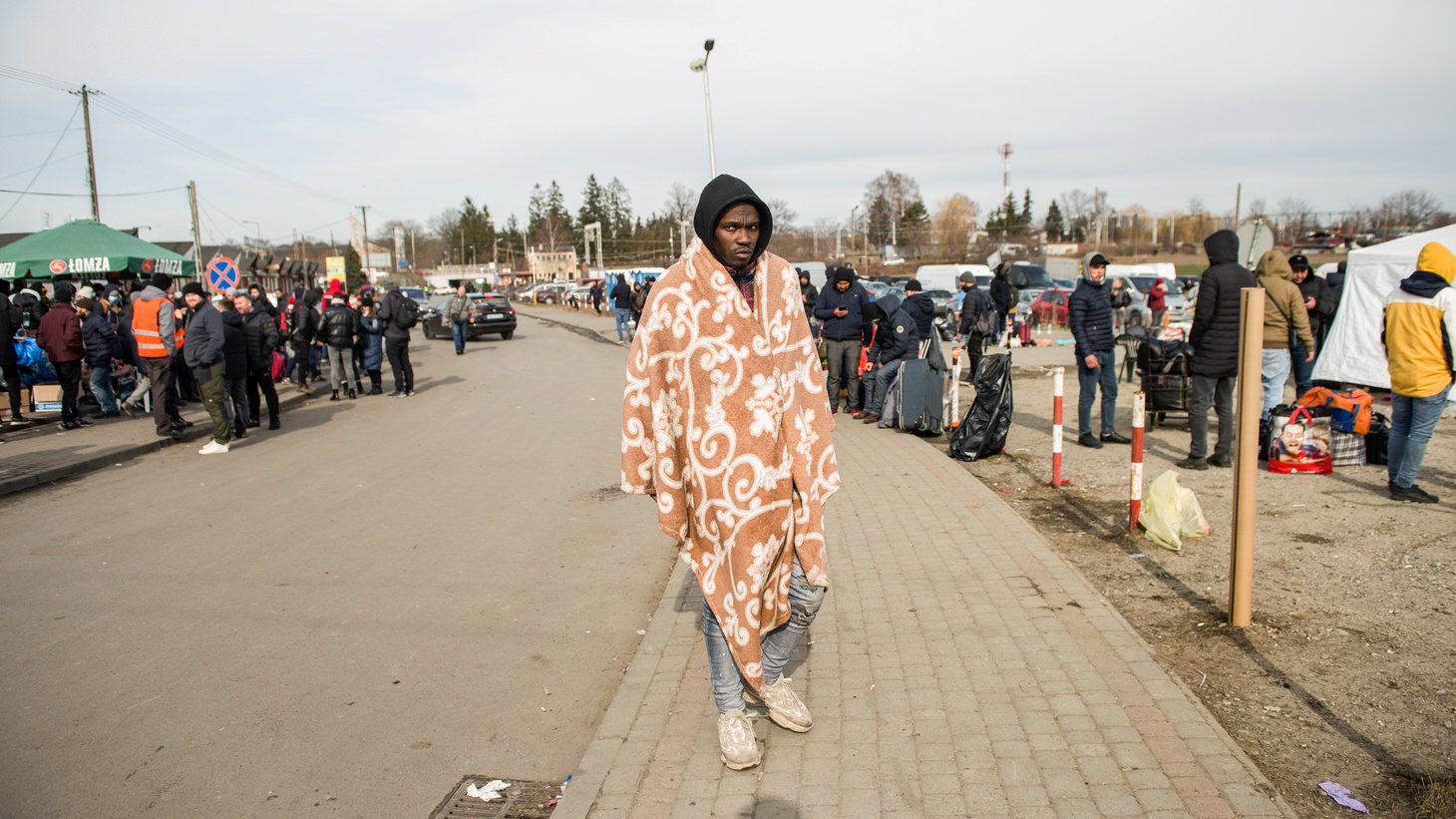 An African man covering himself in a blanket is seen at the border of Ukraine and Poland. In southeastern Poland, hundreds of non-Ukrainians are sheltering. People fleeing the war in Ukraine for the safety of European border towns include citizens of African, Asian and Middle East countries. Photo by Attila Husejnow /SOPA Images/Sipa USA.

While millions of Ukrainians have fled the country since Russia's invasion less than a month ago, escaping the violence has been nearly impossible for people who aren’t white. Africans report walking for hours to buses and trains, only to be barred from leaving Ukraine. The African Union has condemned the treatment as unfair and a breach of international law.

Historian Kimberly St. Julian Varnon has worked directly with African and Indian students under siege in Sumy, Ukraine, and helped them secure food and other resources. She’s a PhD fellow at the University of Pennsylvania who studies race and foreign policy in Russia and Ukraine.

“A lot of them were worried. There are rumors that foreign students are being used as human shields essentially. And that was why they weren't allowed to leave,” she tells KCRW. “A lot of the videos that we saw early on in the war were with African students in particular, but also Indian students, Middle Eastern students who were being turned away.”

According to Varnon, men ages 18-60 aren’t allowed to leave Ukraine right now because they could be called to fight in the war. But she says that African women and children have also been denied access to trains and buses.

The Ukrainian government has spoken out publicly about the issue, but she credits the action to the immense political pressure the country has faced.

“It is definitely a matter of racism. But this wasn't the official policy of the Ukrainian government. And it was something that was being enacted on the ground by Ukrainian and Polish officials from what I understand,” she explains. “The Ukrainian foreign minister did release a statement about these instances of racism and called them out, saying they had to stop and there was no reason people of color should not be allowed to cross. And he also set up a hotline for these students, and foreigners in general, to call if they're having trouble getting across the border.”

Varnon says she’s also concerned about Russia using Ukrainian anti-Black discrimination as propaganda. She uses the example of Russia’s Foreign Ministry reposting videos from African students who were upset about not being allowed to leave.

“They use it as propaganda to say, ‘Look how racist Ukraine is against the students. Look at how they're treating Black students’. And so what we saw was Russia using legitimate examples of racism and anti-Black racism to support their propaganda against Ukraine, and calling Ukraine racist and calling Ukraine a Nazi country. But the problem was in Sumy, the students were in those conditions because of the Russian occupation.”

In 2013, Varnon visited Ukraine and says she experienced both positive and negative experiences there.

“I did run into a group of neo-Nazis when I was coming up off of the subway. And that was terrifying to say the least. But in the same vein, I had a lot of really good experiences of the people being really welcoming to me,” she says. “But I was also very careful. I didn't go out at night by myself. I didn't go to soccer games or soccer stadiums in the middle of the day, or when there are soccer games, because those tend to be places and sites of anti-Black racism in Ukraine and in Russia.”

Moving forward, Varnon says she’s concerned about students who might not be able to get home or continue their studies after escaping Ukraine. Some students don’t come from countries with financial resources to get them home, such as Cameroon or the Central African Republic. Others might not have many options to continue their education.

“The EU has opened its doors to Ukrainians who hold Ukrainian passports, but not to third country nationals, like these African students. So they have 30 days in Poland or Hungary, and then they have to transit to another country or go home. And they don't have the financial resources to just buy a flight home.”

She adds, “So what we're seeing now is the secondary part of the migration crisis of, ‘How do you establish a new home, how do you restart your medical degree you're working on in Ukraine?’ A lot of their lives have been completely upended and they can't go back home. So they're in limbo right now.”