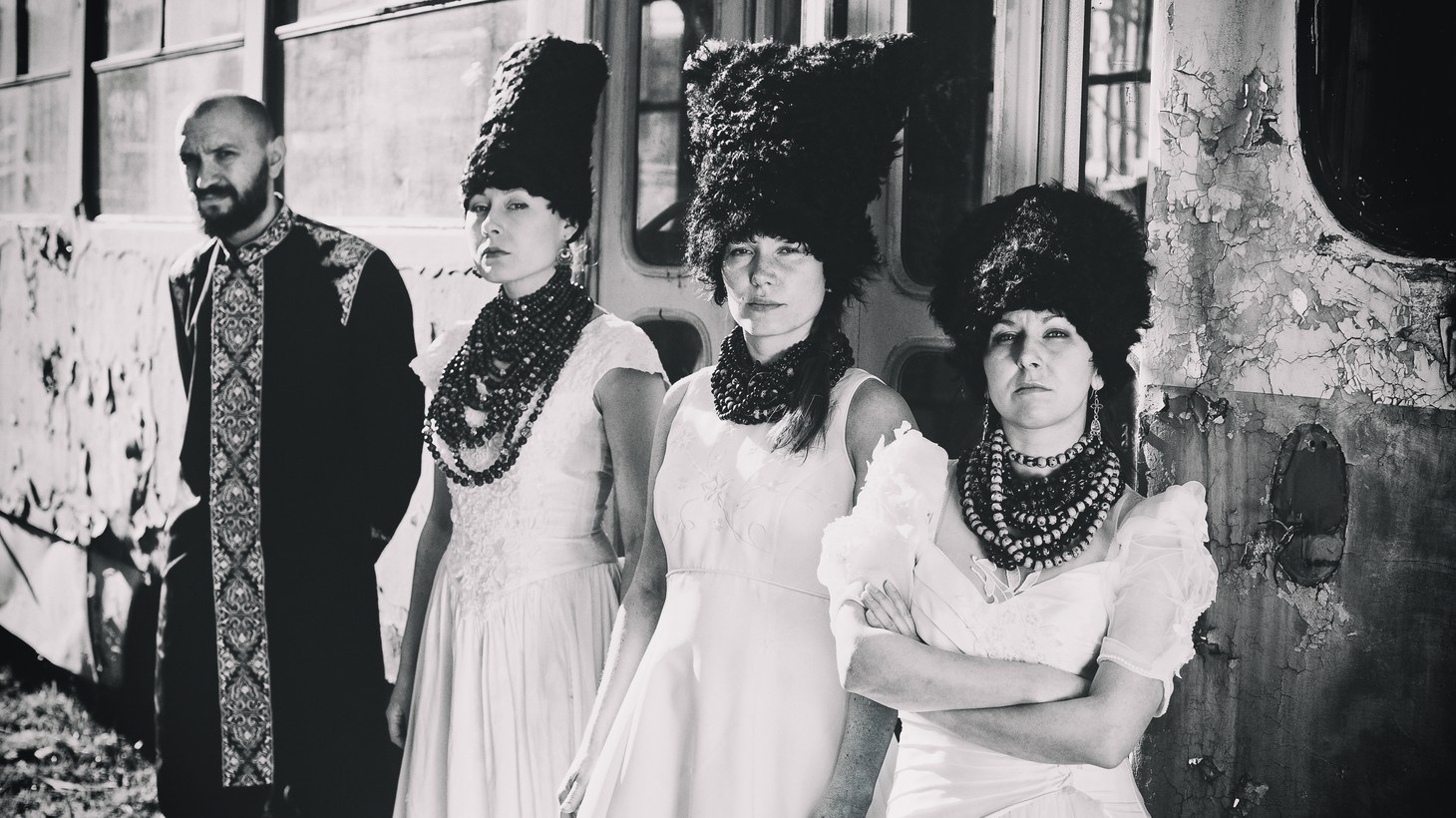 The Ukrainian band DakhaBrakha is touring the U.S. while their country continues to face the brutality of Russia’s invasion. The band is using their shows to raise money for Ukrainians stuck in the chaos. Credit: Vilchynska Tetiana.

This year, the Ukrainian band DakhaBrakha was on a comeback tour through Europe after a long COVID pandemic, and just when they began the leg in their home country, Russia invaded. The quartet members, who are from Kyiv, canceled their shows, fled the violence, and left behind the life they knew. Now they’re touring the U.S. and sharing their story along the way.

DakhaBrakha’s music is rooted in Ukrainian folk and includes elements of hip-hop, punk, plus African and Asian beats. They describe their sound as “ethno-chaos.”

Band member Marko Halanevych was able to leave for the U.S. because he got a permit from Ukraine’s Ministry of Culture. He says their director encouraged them to keep doing what they’re best at — playing concerts, spreading news about their work, and fundraising — when everyone realized the war wouldn’t end quickly. (His brother, parents, and in-laws are still in Ukraine. His wife and younger daughter are in France, while his oldest daughter is with him in the states.)

Even before the war began, Halanevych was already speaking out against Russia through his music. “War started like eight years ago, and after each performance, they tried to tell some important notice,” he says through his translator and manager Iryna Gorban. “But now it became more atmosphere, more dramatic, and more thematic. And we use video and now it's also illustration — so Ukrainian artists, some photographers, they’re all devoted to war.”

Their song “Пливе човен,” which translates to “A Boat is Sailing,” is about a couple who separates because the man became a soldier and must go to war. “We devoted it to all people who stand with Ukraine, and we just really want to show this brave spirit in this song,” says Halanevych.

As he tours the U.S., he senses that the audience can feel the emotions in the band’s songs. “After each concert … people gave us some presents, some portraits of Zelensky, some yellow-blue toys … flowers of course. And it's very important for us because we see and we feel this support from the people, and really want to thank you to the whole U.S. people who just have this solidarity with us.”

Their song “Vesna,” which translates to “Spring,” is a symbol of building something new, Halanevych explains.

“It's like ray of hope and belief in our victory. … We really need help to defend our country, we need arms. And this is necessary to explain [to] local governments and to people who can influence these decisions. … It's not only against Ukrainians, they're against all humanity. … If Ukraine disappear, Russia never stops and go further. That's why it's important to stop it now.”

Halanevych says when DakhaBrakha’s U.S. tour ends, the members would like to go back home and be with their families, but they understand the probability is low. They also have a one-week break before their European tour continues.

“It's very important for us to play a lot because Ukraine can disappear from the newspaper. … We need to raise money, not only for people who are in Ukraine, but also for refugees, for rebuilding country.”

A portion of their revenue from touring and album sales goes to different foundations, and 100% of merchandise sales goes to Ukraine, he says.

DakhaBrakha is performing in LA on April 24 at the Theatre at The Ace Hotel, presented by UCLA's Center for the Art of Performance.