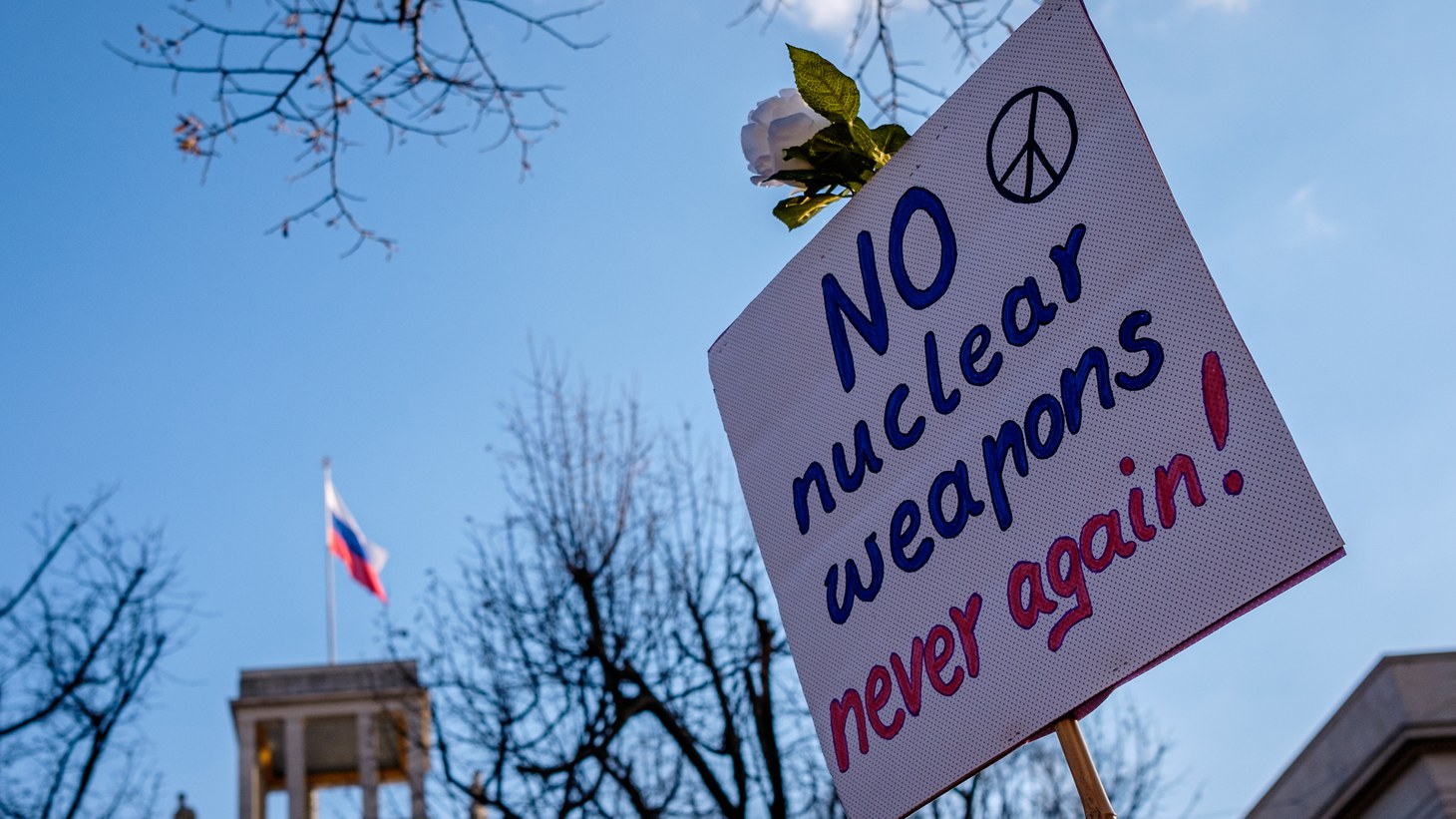 A sign saying 'No nuclear weapons, never again!' can be seen as members of the Rundfunkchor Berlin (Berlin Radio Choir) sing in solidarity with Ukraine in front of the Russian Embassy in Central Berlin to protest the ongoing Russian invasion of Ukraine, March 05, 2022. Photo by Jan Scheunert/Sipa USA.

The U.S. is banning imports of Russian oil and natural gas, and the U.K. is phasing out Russian oil over the rest of the year. The European Union says it might cut Russian gas imports by two-thirds this year. All this represents the biggest financial threat to Russia’s economy so far.

Over the weekend, Russian President Vladimir Putin described the  Western sanctions as “akin to a declaration of war.” His country has around 6,000 nuclear weapons — the largest stockpile in the world. And as the conflict continues, the possibility of Putin using nuclear weapons increases.

“Both the U.S. and Russia maintain a certain small portion of its nuclear arsenal on some kind of alert, just in case,” says J.D. Williams, senior international and defense policy researcher at Rand. “It could mean moving more actual nuclear forces into that state, deploying more missiles to the field, sending submarines out. At least according to Department of Defense reporting, we’re not seeing that happen yet.”

“But in my view, it's really more of a message that he's sending, as opposed to the actual actions that he's carrying out. … It was a warning shot.”

What about tactical nuclear weapons solely used in Ukraine? He says we’re not there yet, but it’s disconcerting that we must consider such a possibility, especially if conditions deteriorate, or there’s a misperception of how other countries are aiding Ukraine.

If Russia ultimately decides to launch nuclear weapons, what scenarios would play out? Williams predicts it could happen in a territory of Russia and away from populations, or it’d be aimed at achieving a specific battlefield impact.

He adds, “Just the idea of taking on this invasion at all, Putin has clearly broken some norms in going into an area in Europe with major interstate conflict that we haven't been in since the 1940s. Unfortunately, I don't think we can be too firm in predictions of how things might be limited.”

Meanwhile, Ukrainian forces have mounted a strong defense against more heavily armed Russian forces. Could Ukraine prevail in this conflict?

“Right now, the Ukrainians are winning by delaying and frustrating the Russian objectives. And the longer that continues … the better the outlook is,” Williams says. “But if Putin and Russia are willing to put their resources into this, it's going to be very difficult for the Ukrainians to hold the major population centers in the eastern part of the country.”