In New York, a sidewalk tribute to Anthony Bourdain As news of Anthony Bourdain’s death spread a year ago, something remarkable happened. A spontaneous memorial sprung up on a sidewalk in New York. The site was the now-shuttered Brasserie Les Halles, the Park Avenue restaurant where Bourdain served as the executive chef for many years. Reporter Elizabeth Kulas spoke with mourners and curious onlookers. 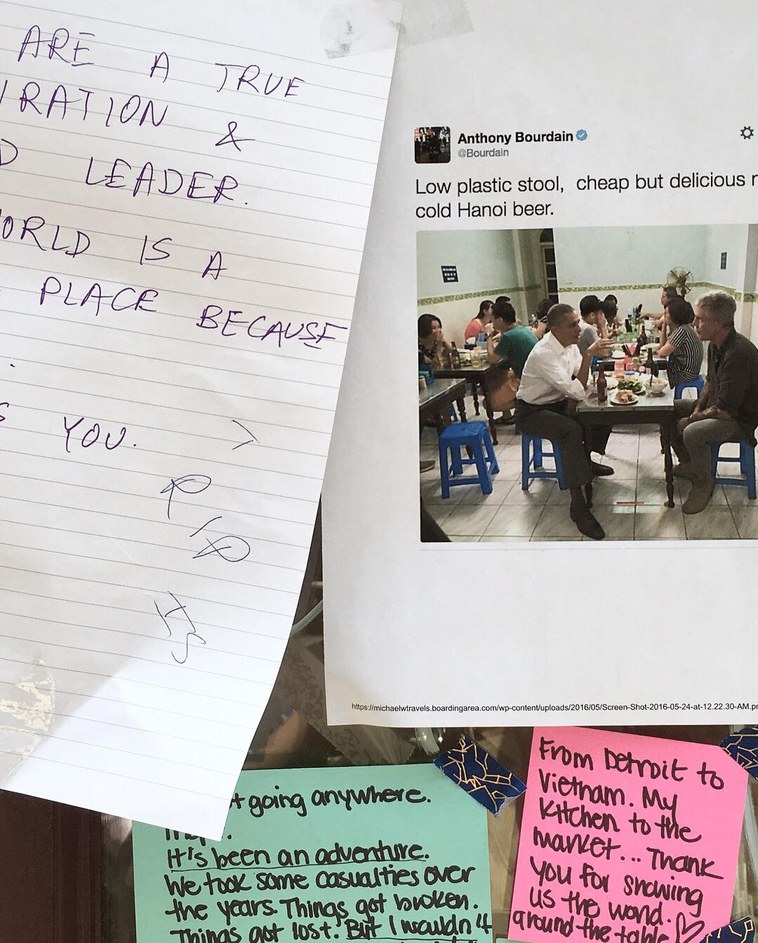 One of the many taped notes left by mourners on the now-shuttered Brasserie Les Halles in New York City. Photo by Nick Liao/KCRW

“Good Food managing producer Nick Liao and I happened to be in New York the day the world heard we lost Tony. In fact, we happened upon a spontaneous memorial in front of the shuttered Les Halles, the restaurant where he worked while writing “Kitchen Confidential.” What struck me as I stood there reading the notes that had been taped to the windows was how personal the loss was for people.  They weren’t fan notes, they were notes from bereft friends who felt so close they needed this physical place to feel less adrift.

“I know that for me, Bourdain was always someone who looked deeper than almost anyone at the complicated human story that food tells.  And he always made fellow kitchen travelers feel seen. I know he made me feel that way. The first time we were in the studio together, he grabbed my hands and rotated my arms to look at my burn scars. He didn’t need to say anything else. We knew what we shared.

“This has been a hard year on the heels of a couple hard years.  Perhaps that is why the loss of our favorite hard-ass and thinking person Anthony Bourdain is still so damn hard. The aching loss of such insight and humanity right when we need it the most still hurts as does the knowledge of how much he must have been hurting. For many of us, it’s been a year of being there for friends, for family and colleagues. Of showing up. It’s the least we can do.”

A day to remember Anthony Bourdain

The first time Good Food host Evan Kleiman interviewed Anthony Bourdain was in July of 2000, shortly after his first book came out. In 1999, he had written a widely read...

Anthony Bourdain had a self-professed affinity for the everyman. As the longtime executive chef of Brasserie Les Halles in New York, he had an interest in making the...

Anthony Bourdain glimpsed the “nasty” side of the food world

In 2006, Anthony Bourdain visited Good Food to discuss “ Nasty Bits ,” a collection of essays diving deeper into the food world and all of its indiscretions.

Bourdain’s evolution over the years

In 2010, Anthony Bourdain spoke with Evan Kleiman about “ Medium Raw ,” a memoir that became a sequel of sorts to “Kitchen Confidential.”

In New York, a sidewalk tribute to Anthony Bourdain

As news of Anthony Bourdain’s death spread a year ago, something remarkable happened. A spontaneous memorial sprung up on a sidewalk in New York.

As a semi-reconstructed bad boy, Bourdain had roots in the punk scene, and music played an outsized role in his life. In 2010, he joined KCRW’s Guest DJ Project to talk...