Eating with locals and refugees across Turkey, Cyprus, and Greece Halloumi is popular in the Eastern Mediterranean with Cyrus claiming to be the home of the cheese. Photo by Matt Russell.

What do borders mean in a globalized world? It's a question Yasmin Khan asked herself while exploring the rich history and flavors of the Eastern Mediterranean for her latest cookbook, “Ripe Figs: Recipes and Stories from Turkey, Greece, and Cyprus.”

“Turkey is now the biggest recipient of refugees in the world, 3.6 million refugees were housed there,” Khan tells KCRW’s Good Food. “Last year, we can say that in the U.S., it was just 122,000 people. So when politicians try and say that we have issues in the West, when you compare it to that region, it's not the same at all.”

Before Khan turned to food writing, she studied law and campaigned for human rights. In “Ripe Figs,” she focuses her lens on Turkey, Cyprus, and Greece, where she ate with ordinary people, both refugees and locals, and found herself incredibly moved to see the hospitality that individuals from all countries extend to each other at the table.

KCRW: When you refer to the Eastern Mediterranean, what countries are you including?

Yasmin Khan: “For the purpose of this cookbook, I'm talking about Greece, Turkey, and Cyprus, although the borders of the Eastern Mediterranean can go a little wider. I wanted to pick those countries because I think they've got a fluidity in that cuisine, and have historically had a fluidity in their borders.

For 400 years, the Ottoman Empire probably had the most significant culinary influence throughout that whole region. But more than that, when we go back over several millennia, this is a region where the ancient Greeks had empires, where the Venetians, the Romans, and the Persians all saw their empires roam through, so it's got this incredible history as well. And you see those similarities that are woven from the history on people's dining tables.”

When did you first travel to the area?

“I think about 30 years ago, I traveled there with my family. We went to Turkey for one of our summer vacations. And it was just a magical summer holiday. And what my most of my fondest memories of that trip are are gazing out onto the shimmering turquoise blue waters of the Aegean Sea and tucking into delicious grilled fish kebabs and drinking tangy and sharp sour cherry juice. And I just fell in love with the food and really became enamored with Turkish cuisine and Turkish culture.”

How do the memories of that idyllic trip reconcile with your more recent visits?

“What I try to do with my work and my cookbooks is to take readers on a journey that, yes, explores the celebratory aspects of what we eat, and the recipes we share, but also doesn't shy away from some of the harsher realities. And I wanted to explore this region because in the last six years, it's gone through a huge shift with the biggest movement of people since the Second World War coming into the area, mostly remnants or after effects of the Syrian Civil War and the wars in Iraq and Afghanistan.

So as someone who's increasingly become interested in borders and migration, and felt quite challenged and conflicted by the the political narratives that have been taking place on both sides of the Atlantic, I wanted to go there to explore what this migration had done in the region, and also what borders and identity mean in an increasingly interconnected world.”

One of the elements of the book that I find so interesting is how you freely interpret traditional recipes. As an example, could you talk about the smoky lima beans?

“Absolutely. Gigantes plaki is a very traditional Greek dish, made with lima beans that are cooked in a tomato-based sauce that's then baked in the oven. It's a wonderful dish and I absolutely love it. And I'm a big advocate for cooking beans from scratch, but I fully appreciate not everyone has the time to do that. So my version of the dish uses canned beans and it's cooked on the stove.

And I kind of upped the paprika element because I love sweet paprika and smoked paprika. And it's just an incredibly easy midweek dinner that you can get on the table in less than half an hour, but just can transport you to the sunny shores of the Mediterranean.”

Let's talk about breakfast. Because breakfast in that part of the world has to be one of my favorites.

“The Turkish breakfast is truly one of the most exquisite meals that someone can have. It is an assortment of dishes hot and cold, from eggs done with either pastrami or some sucuk, which is a spicy sausage, or perhaps eggs poached in a beautiful yogurt with chili butter. So you'll always have some eggs, then you'll have some fresh vegetables, some cucumber, some tomatoes, or some olives, a few different types of cheeses.

… There will always be some jams, and really interesting jams, not just like a strawberry jam, but perhaps a carrot jam or a rose petal jam. And then my personal favorite is slabs of honey and honeycomb and alongside it. There’s also kaymak, which is a cream a bit like the British clotted cream, but this kind is made from buffalo milk and it's really rich and creamy. All of this stuff with some bread and tahini, you have it for breakfast and you don't need to eat for the rest of the day.”

Speaking of tahini, one of your recipes is for these beautiful flaky tahini swirls.

“Yes, this is something that's very common in all three countries, with each having their own variation on it. They’re sweet pastries made with an enriched dough, and you weave a sugar and tahini mix in between the layers of pastry so that after it cooks, it's kind of slightly crisp and that sweet tahini is layered throughout it. An essential accompaniment is a cup of coffee forever. We have black coffee from the region. I absolutely love it. And I made so many of them during the early days of the lockdown last year, it became my go-to.”

One of the ingredients sort of sprinkled throughout the region is haloumi, with its salty bite and very particular texture. How is it used in different places?

“Haloumi is a very popular cheese. It's incredibly popular at breakfast time, just classically fried and served with some bread and chopped tomatoes. But it's also used in a whole manner of ways which were quite new to me. In Cyprus, for example, they do an incredible haloumi and mint ravioli. It's also used in breads. There are great olive and halloumi breads that are made in Cyprus. Cyprus claims that it's the home of haloumi, and given the amount of dishes that they have with it, that doesn't surprise me.”

You own up to the fact that not every dish is some Instagram-ready, gorgeous thing. But you can find comfort and deliciousness where you least expect it. One of these “stumble upon” dishes you found was the black eyed peas with chard.

“Even just remembering the first time I ate that, I’m in awe. I just stumbled out of the bus station at Nicosia Central, the capital of Cyprus, and there was a really busy cafe on the corner and I was really hungry. … I saw that everybody was ordering the same dish. So I just pointed to what people were having and said, ‘I'll have one of those.’

And I didn't know that at the time, but this is a very famous summer dish in Cyprus, which is cooked black eyed beans. They're cooked with some fresh chard, or you could do any wild greens, and then doused in lots of garlic, lemon, and olive oil. They were so simple, but for me, it encapsulated the truth that when you get fresh food in season that's locally grown, it really just needs some olive oil, lemon, and garlic, and all of a sudden it's one of the most exquisite meals ever.” 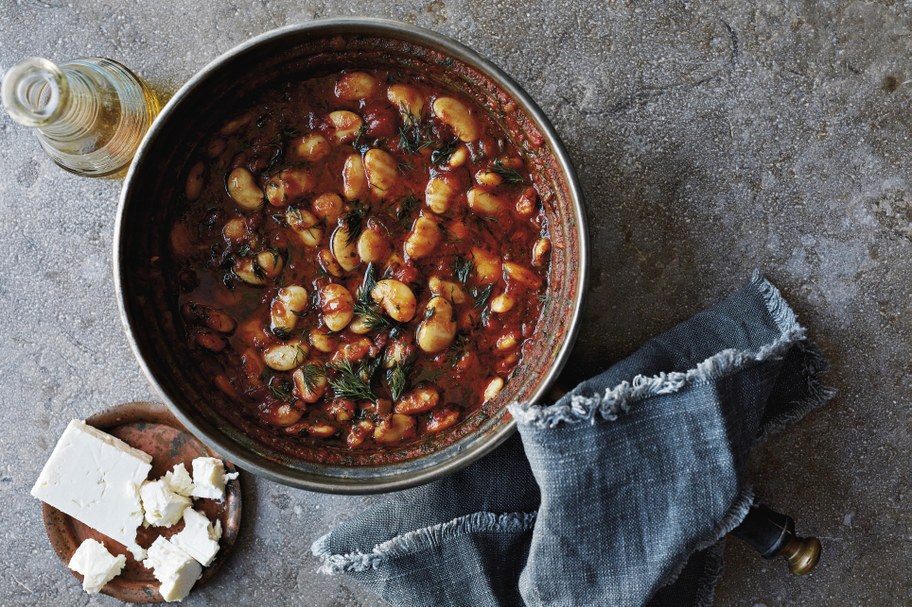 Have a pantry full of pandemic beans? Yasmin Khan’s smoky limas can be made from canned beans and prepared in a half an hour. Photo by Matt Russell.

This is one of those punchy pantry recipes that is easy to whip up as a midweek meal and takes its inspiration from a traditional Greek dish of beans baked in a tomato sauce. I make my version on the stove for speed, but you can transfer the beans to an oven-safe dish, cover with foil, and bake for 45 minutes at 350°F/180°C if you prefer. Lima beans have a creamier and meatier texture than other white beans, and they hold their shape better in longer cooking, making them perfect for slow-cooked stews. What gives this dish its unique flavor is the paprika (I add both the smoked and sweet versions, not the hot and spicy type), which adds a richness and earthiness that I find irresistible. I alternate between sprinkling crumbled feta on top of this dish and having it plain, as it’s just as delicious without. Serve warm or at room temperature.

-Heat the vegetable oil in a large saucepan.
-Add the onion and gently fry over medium heat for 12 to 15 minutes until soft.
-Add the garlic and cook for another few minutes, then add the tomatoes, sugar, oregano, both types of paprika, the cinnamon, 1 teaspoon salt, and a generous grind of black pepper.
-Cover and simmer for 15 minutes.
-Add the beans to the tomato sauce with the hot water and another 1/2 teaspoon salt.
-Cover and cook over low heat for 30 minutes.
-Stir in the extra-virgin olive oil and herbs and cook for a final 5 minutes.
-Taste, adjust the seasoning, and sprinkle with more herbs, and with crumbled feta if you fancy it, just before serving. 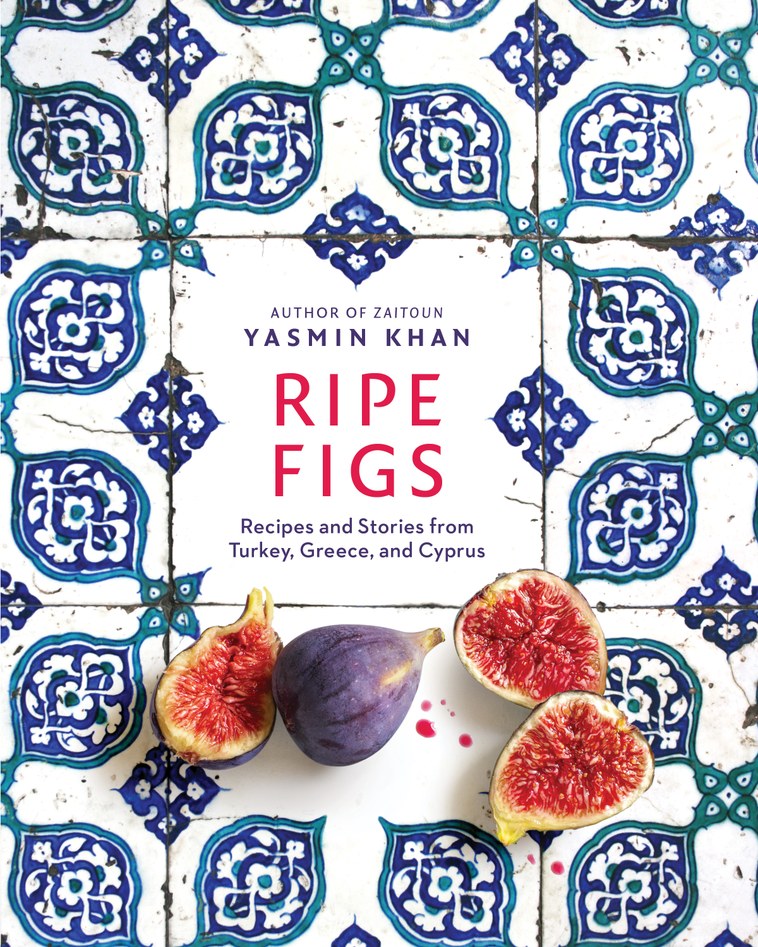 Eating with locals and refugees across Turkey, Cyprus, and Greece

What do borders mean in a globalized world?

Wild mustard beyond a condiment: Use it to make paper, ink, fertilizer

Master gardener Alyssa Kahn asserts that wild mustard has a complicated history of how it made its way to California, threatening biodiversity and inhibiting seed...

Fungi fanatics: Focusing on the future

Mushroom species are prolific and diverse, and less than 10% of them are documented, according to Doug Bierend . Now the lesser-known fungi are being embraced and studied by...

‘In the Weeds’: A carousel of pivots at Yang’s Kitchen

Chef/owner Chris Yang had a neighborhood and media darling on his hands when Yang’s Kitchen opened in 2019. Despite its popularity and accolades, labor and the price of...

Dude food: ‘Comfort food with an edge of competitive destruction’

A shift has occurred in how the media conditioned the public to think about men’s bodies and ideals. When plumb was a sign of prosperity and class status, the 20th century...

Competing for the spotlight: Stone fruit and berries are in season

At the Santa Monica Farmer’s Market, correspondent Gillian Ferguson meets up with Chef Zarah Khan of Botanica in Silver Lake.