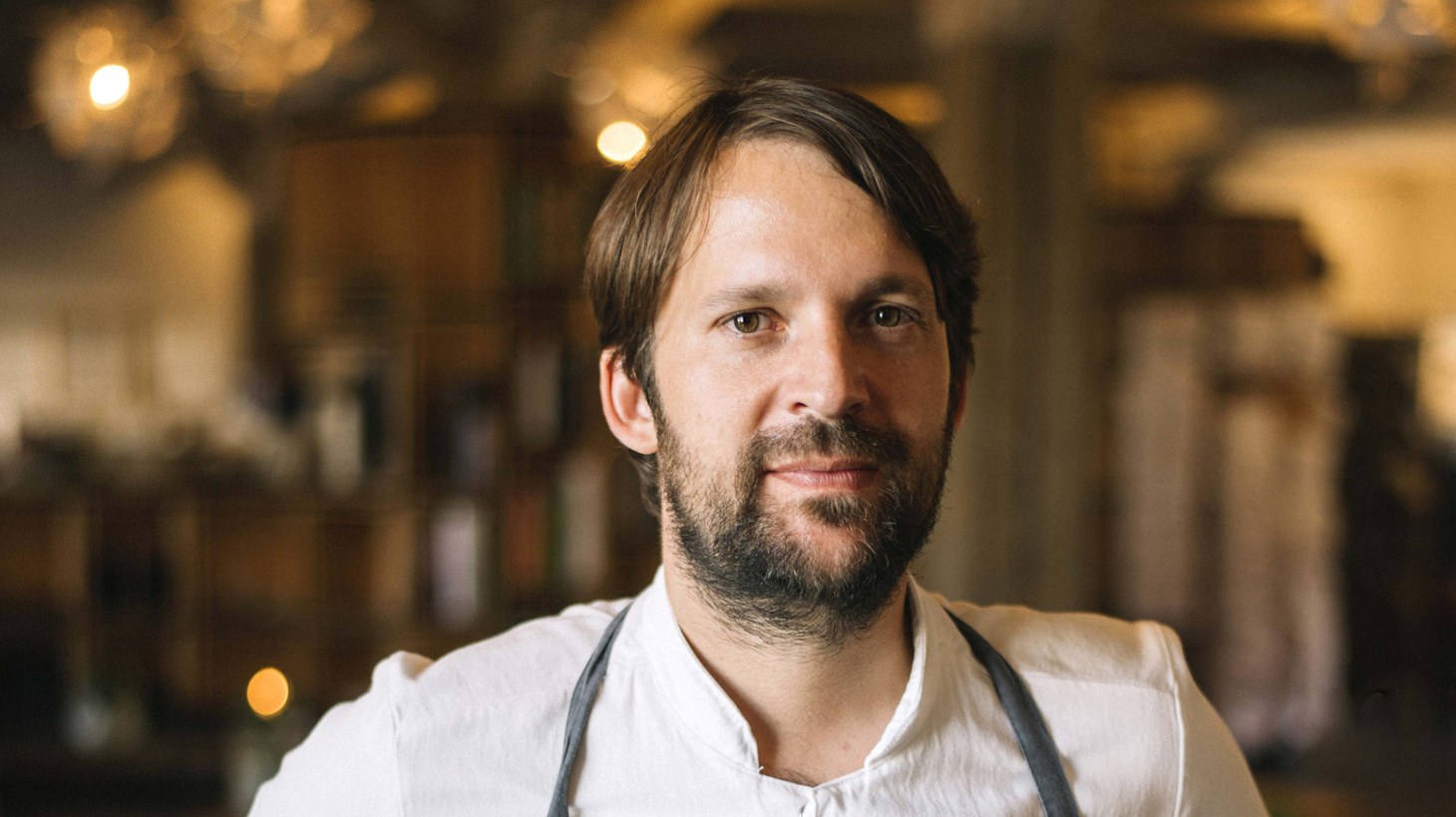 René Redzepi says, “It takes discipline to be curious,” and challenges his chefs with curiosity and a mantra of “one idea out, ten ideas in.” Photo by Laura Lajh Prijatelj.

KCRW: I’ve thought a lot about how so many of our worlds contracted during the past couple of years, and how easy it is to fall into old patterns. In the introduction to the new book, you say it takes discipline to be curious. Can you please talk a bit about that? I think we could all use a pep talk.

René Redzepi: A whole life is searching for creativity. That is what fuels me and drives my everyday life, it is actually what makes me happy. And over the years, I've just come to discover that, as much as creativity is also about venturing into the unknown, you still need to have a frame around it. That frame takes a lot of discipline, to create, to maintain, to withhold to be and that's something that I've had to learn over the years, just how important discipline is. For creativity, it's simply just going into your creative space and saying, “I'm gonna be here, shut up all my phones, shut everything off, it's a distraction. I'm just going to go to work with this group of people.” And that in itself, in today's world, it can be hard enough just to shut off your phone, right? But that's an example of a discipline that we do. Another discipline is that I tell myself that for every amazing idea that we have, we need to find 10 ideas to put into our minds –  meaning you actually have to take the time to go somewhere else that's not work, or read a book or talk to someone else that's not always in your circle. The equation we have is one idea out 10 ideas in. And so the discipline of that to actually every week, every month to allow yourself the time to read or be curious about a new subject, or go to see an art show, stuff like that. That actually also takes a lot of discipline. But if you do that, you can actually replenish your mind with fresh ideas constantly.

You closed Noma in 2018 and then revamped it. You moved it across the water creating an entirely new space from a kind of unprepossessing environment. That must have been terrifying for you to shutter a successful restaurant.

It was terrible. And I remember on the last day of closing, I was a nervous wreck. And for many months afterwards. But I also knew deep down in my heart and in my soul in every fiber of my body, that doing something new, would raise all these new questions that we wouldn't otherwise have raised with ourselves. So when we decided to close Noma, we were so successful. It's amazing. It's full all the time. We have all this success, but yet the creativity seems to be drying up somewhat. And as soon as we made that decision, and we found that new location to move in, we started thinking about everything that we did and just raised all these questions. So then we saw seasonality and a crash over with a fresh perspective. We could see that, “Hey, we've been playing around with this one menu all year long with a rolling change throughout the year of dishes, when what we should be doing is that in the winter, when everything is frozen over around us, we should turn to the ocean. And then when everything turns green in summer, why don't we just serve vegetables in that period. And then when the leaves fall from the trees, we should do what the tradition dictates, which is to go to the forest, and, and take part in the hunt.”

Just that little questioning gave us a whole new, fresh approach to how to cook and serve our menus and how to have creativity and it fueled us. It sprouted what I would consider the most important creative period that we've had in the last 20 years, which is the last four and a half years with Noma. Maybe it's also something to do with the fact that we're sort of mature now. We think better, we work together in a better way. There's less chaos, and we're just more together when we work. The team that's around – myself, particularly the test kitchen, or the one who has been there the shortest amount of time is eight years, and the one who's been there the longest is 15. There's this trust in the team, and a certain level of trust in ourselves as well. It was daunting, scary, but I would do it again. 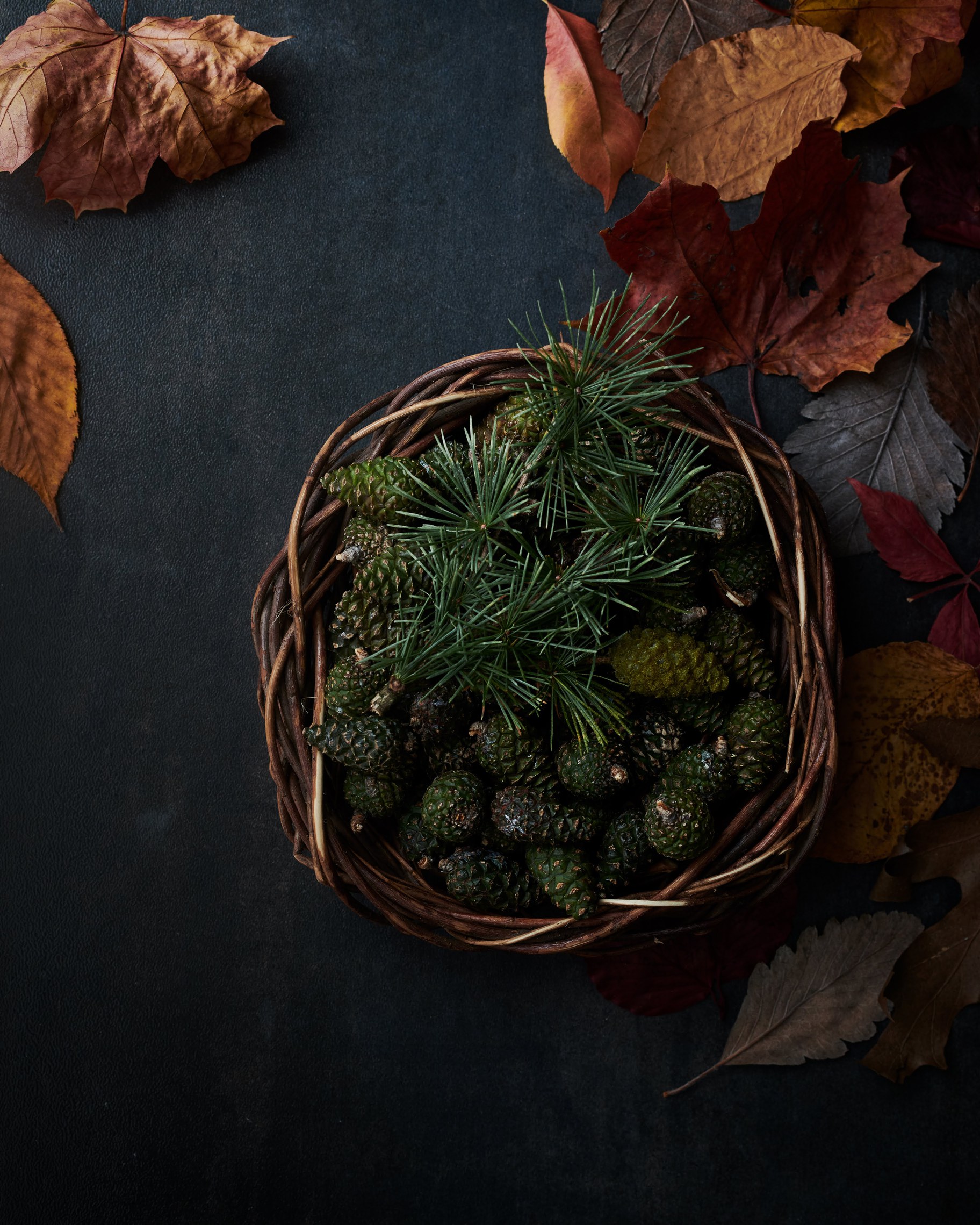 As part of the Forest menu which runs September through December, sugars, condensed milk, and smoked butter are cooked into a fudge, which is flavored with pine vinegar and Douglas fir needles and poured into pine cone molds. Photo by Ditte Isager.

In your book, it's clear how the experience of both Mexico and Japan have left their imprint on you. Could you take one dish and parse out how you transform those experiences of being away into dishes served at the restaurant?

The one serving that immediately comes to mind is the celeriac shawarma. The reason why that comes to mind is because this goes back to the first time I went to Mexico, it was in 2006 and arrived late at night. It was actually in Mérida. Back then Mérida was a real dusty, sleepy town where nothing really was happening. And late at night, I was hungry after a long flight. And we went and had al pastor – I'd never tried it before. It was this incredible moment for me to try something that was so different to what I knew as shawarma from back home in Europe. My family are Albanians – and so we grew up with a lot of Turkish food. I'd had these types of foods before, but this was just something completely different.

Having al pastor in Mexico always made me think, “how can we do something like that, but in Denmark.” It wasn't until 15 or 16 years later, when we had our first vegetarian season, and I asked the head of the test kitchen: “Can we do this in a vegetarian fashion? How would that look if meat was replaced with some sort of vegetable?” That is arguably one of our most iconic servings in the past four years, the celeriac shawarma, and also one of the most successful ones.

You also asked about what effect Japan had in our kitchen. In this celeriac shawarma, where the inspiration is from al pastor in Mérida, it's slices of celeriac. In between the layers, there's all these ferments and pastes, all these umami potent liquids that we've created over the last 15 to 20 years. You can say that that is actually a direct inspiration from the many trips I've had to Japan. So it just is the perfect fusion of the journeys. The two countries, besides Denmark, that I probably love the most on Earth are Mexico and Japan.

The duck brain tempura and duck heart tartare may not be for the faint of heart, but the name alone made me stop in my tracks. Can you talk to us about that one?

One of the main mantras we've always had at the restaurant is that we wish to serve everything when we have animals on the menu, and we only have animals on the menu when it's game season. So we're always trying to think: “How can we serve everything, and not let anything go to waste?” And believe me, it would be so much easier not to serve that duck brain because it's actually quite complicated to get the brain out of a duck skull. But we do it and it's delicious. Our guests are the average modern Scandinavian guests today. We all need to open our minds a little bit more and eat some more different things so that it's not just all wagyu steak and brownies. 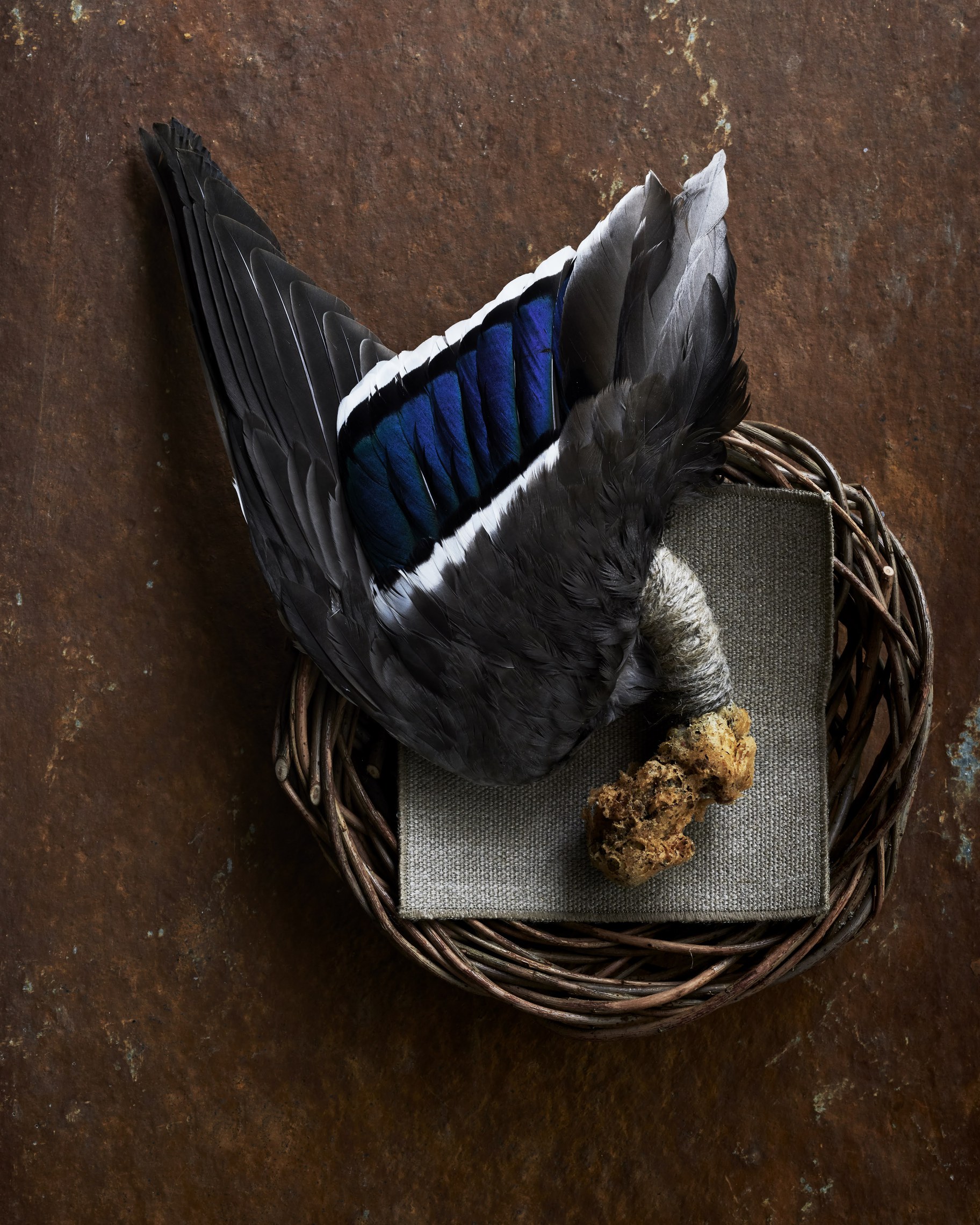 Duck breast is coated in sourdough tempura and served in a whole mallard wing. The fowl’s brain and heart are served in another presentation. Photo by Photo by Ditte Isager.

You were at the Hollywood Farmers’ Market a few weeks ago signing books. I know that you can get your hands on anything at the restaurant, but are there any particular California ingredients that you covet and are more difficult for you to get?

All the citrus that was starting to go into the market now, that was incredible. I tasted this wild persimmon, a tiny little persimmon that I had never seen before. But just in general, I think people who live in California are probably used to it. But when you live in a place where winter arrives sometime in October, and leaves you perhaps anywhere from April to May, it's mind blowing to go down  Hollywood Farmers’ Market at the end of November and see all that abundance. IfI could choose one family of things to have with me, I would choose all the citrus fruits.

I've been incredibly lucky to receive a couple of your pantry products like the mushroom garum and the rose vinegar, which is just absolutely extraordinary. I would imagine that as soon as they were available, they were sold out. What made you decide to offer products?

As soon as the pandemic hit, we made some major decisions for Noma in the future. One of the ideas that we wanted to play around with was, is there any appetite for anything, no matter that's not a restaurant meal. That's why we started Noma Projects. Now we're just in testing mode, because the product that we have, they're so complex to make. I mean, you talk about the rose vinegar, every single rose petal, and there's only five petals on a wild rose. They have been hand-forged, and then we make vinegar from that. So you can imagine the amount of labor that goes into it and a few bottles that we have. When it comes to something like mushroom garum, which is much simpler and easier to make, but it's still anywhere from a three to six months process of brewing mushrooms into an umami sauce. So this is the beginning of a transformation that's coming soon for Noma. 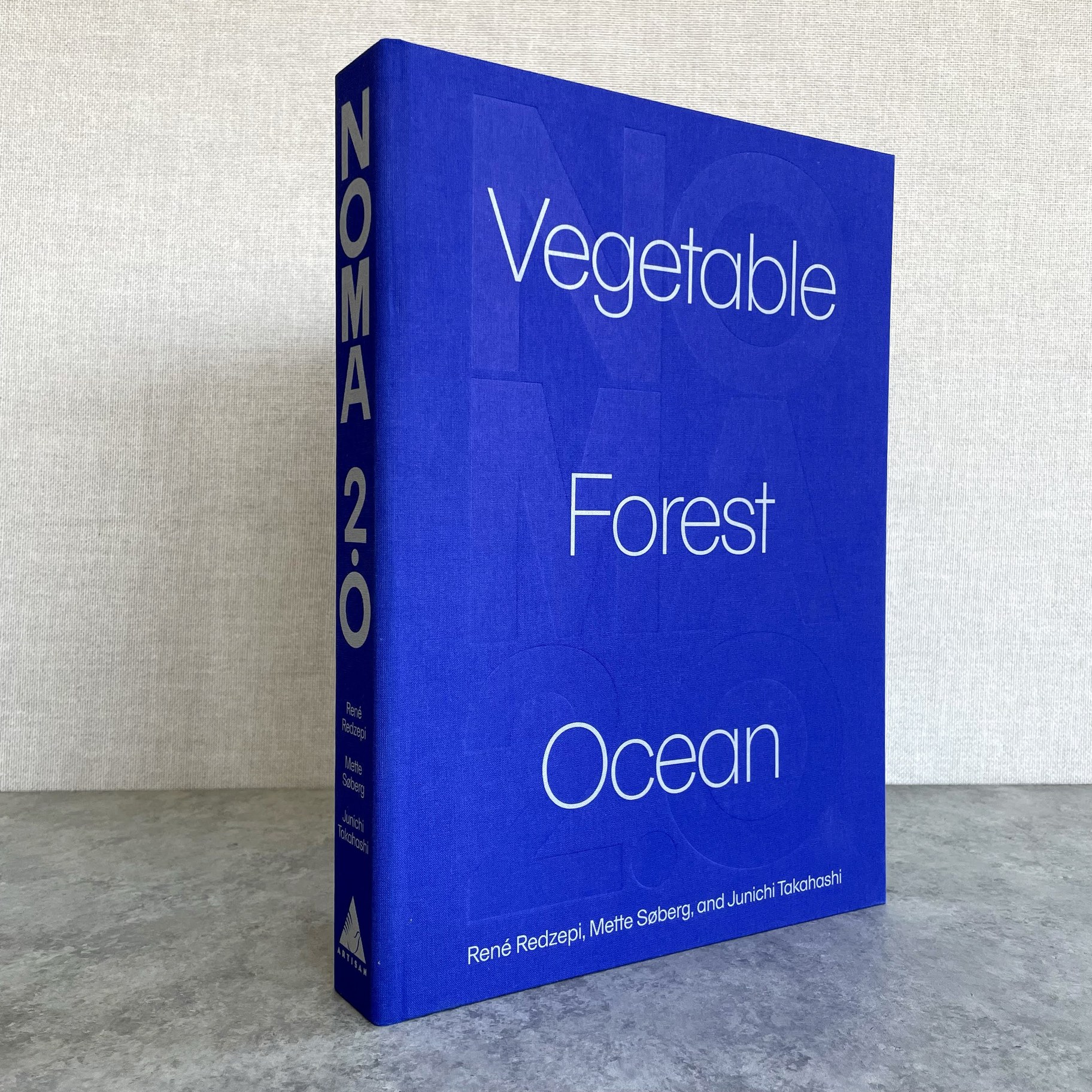 Amid news that he is again shifting concepts at Noma, René Redzepi discusses the restaurant’s reinvention.

“The Woks of Life” documents the Leung family’s history through food.

Sylvia Wu brought an Angeleno sensibility to Chinese food, expanding the cuisine and its fanbase. Tejal Rao explains her impact and legacy.

‘Ottolenghify’ing in the kitchen for extra good results

Chef Zarah Khan culls carrots at the farmer’s market for a new dish at Rustic Canyon.

From a garage pop-up to a brick and mortar in Melrose Hill, Bill Addison reviews Filipino favorite, Kuya Lord.